“A single naïve question is sometimes enough to make an entire system come tumbling down,” a Colombian philosopher who went by the name of Gómez Dávila once said. And lately, a lot of people are starting to ask a lot of innocent questions, because they are encountering things that just don’t seem to make sense, as long as you don’t ask the sort of questions we’re supposed to avoid asking. As I mentioned yesterday, too many people are dying in the Netherlands lately and demographers are beginning to notice it. Morticians are beginning to notice strange patterns too.

The advantage of being part of a real community is that when things turn sour, you will hear the sort of things that the institutes of power seek to keep quiet. Atrocities that ended up in the history books were generally treated as rumors when they took place. One Dutch woman encountered such a “rumor” in her extended network and decided to record it for the sake of transparency. A Dutch mortician asked for help from his peers, to figure out how to make the bodies he treats look more presentable. 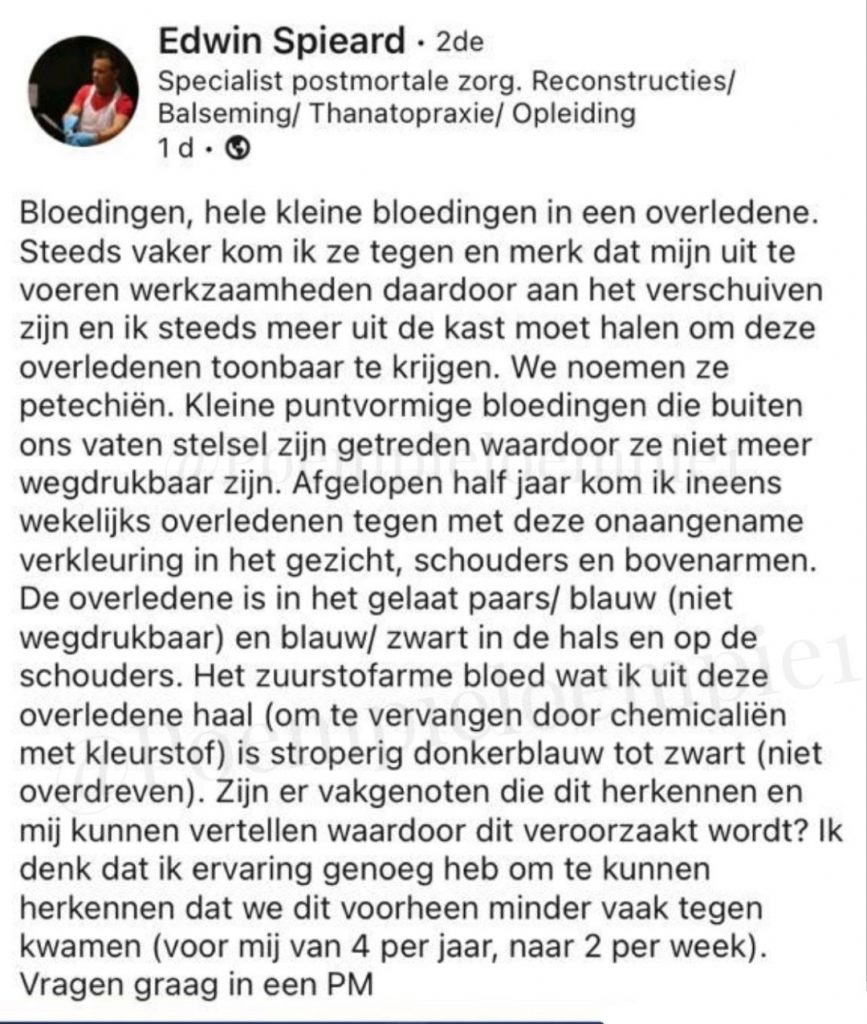 I’ll offer you my best attempt at a translation:

Hemorrhages, very small hemorrhages in a deceased. I notice them increasingly often and notice that my duties are shifting and I’m forced to take increased effort to make the deceased look presentable. We call these petechiae. Small pointy hemorrhages that passed out of the blood vessel system and became impossible to press back as a result. During the past half year I now encounter deceased with this unpleasant discoloration in the face, shoulders and upper arms. The deceased looks purpleish or blue (can’t be pressed away) and blue/black in the neck and the shoulders. The oxygen-poor blood I remove from these deceased (to replace with colored chemicals) is syrupy darkblue to black (not exaggerated). Are there colleagues who recognize this and can tell me what causes this? I think I have sufficient experience to recognize that this used to be far rarer in the past (for me it went from four times a year, to twice a week). Questions please in a PM.

So there you have it. A Dutch mortician notices that the bodies he treats have strange capillary hemorrhages, known as petechiae. What could cause such a thing? There’s a long list of conditions that can cause these symptoms, but there’s one that jumps from the list: Thrombocytopenia. When someone suffers abnormally low platelets, bleeding happens easily, because the blood doesn’t properly coagulate. One of the symptoms a woman can notice from this is heavy menstrual bleeding (which many women have been reporting lately). For men it’s rarer to notice any symptoms.

We know there exists a link between vaccination against COVID-19 and the development of autoimmune thrombocytopenia. What’s harder to determine is how many cases go unreported. This is the sort of indicator you would expect to encounter, if we’re missing many cases of people whose deaths are simply interpreted as an “unexpected tragedy”.

I’ll bother documenting some of the responses too. 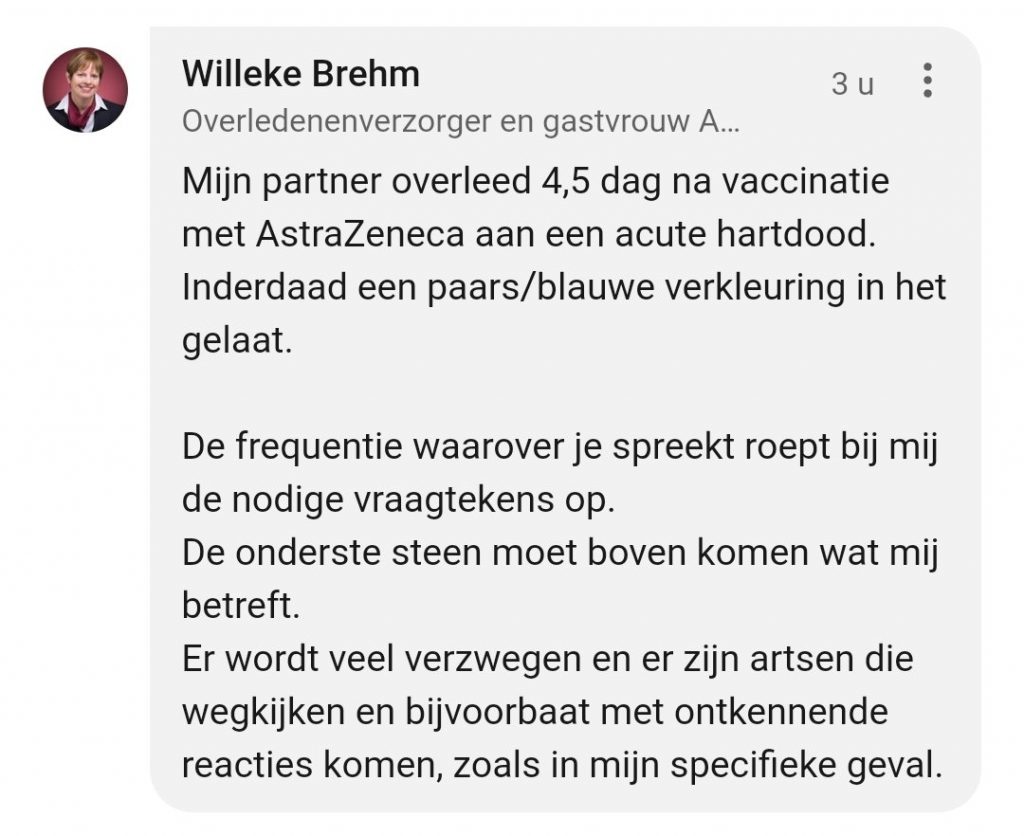 My partner died 4,5 days after vaccination with AstraZeneca from acute heart failure. Indeed there was a purple/blue discoloration in the face. The frequency you speak of raises a number of questions for me. This should be thoroughly investigated. There’s a lot being suppressed and a lot of doctors look away or give denying responses, as was the case in my specific situation.

Another mortician shares something interesting as well: 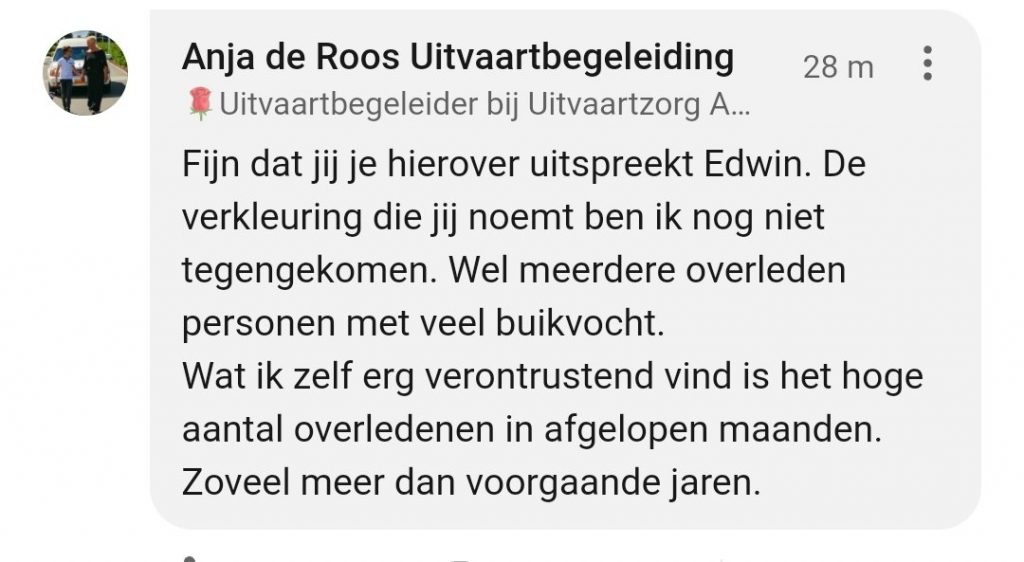 Thanks for speaking out about this Edwin. I haven’t encountered the discoloration you mention yet. I have encountered multiple deceased with a lot of fluid buildup in the abdomen. What I find particularly worrisome myself is the high number of deceased in recent months. So many more than in preceding years.

This is worth looking at as well. The medical term for a buildup of fluid in the abdomen is Ascitis. Although the most common cause is cirrhosis, another possible explanation for such a buildup of fluid is heart failure. If we’re facing far more cases of spontaneous heart failure (as the statistics from England suggest) in people who were otherwise relatively healthy, what this lady described is the sort of thing you could expect morticians to notice.

We can apply some basic math to see whether these reports pass the smell test. An average mortician embalms about two people a day. Mortality in the Netherlands right now is about ten percent above normal. A mortician who would embalm ten people a week would thus now embalm eleven. If every excess death that currently happens displays these type of symptoms, then it fits that a mortician could report encountering two of these cases a week.

In the long run, there are other questions that need to be answered: Is this transitory? We still don’t really know for sure how the vaccines cause myocarditis and blood clots. Scientists are unsure about the underlying mechanism. The spike protein itself is toxic, but the immune response to the spike protein can cause problems too. We just know that they do, because we see far more cases than would be expected by random chance in a given period after administering the vaccine. If the problem is the antibody response to the spike protein, then we would expect to see these antibodies boosted whenever people start to be exposed to the virus again.

These are the sort of questions that would have been nice to have an answer to before the government decided that every single human being above the age of twelve should be injected with these vaccines.