Just like it’s hard to stay a satanist after turning sixteen, I’m not genuinely an anarcho-primitivist any longer. I consider my old perspective on technology to be very immature. Instead, I now consider myself an adherent to the appropriate technology movement. Rather than issuing a blank condemnation of the modern world while offering no solution that can realistically be accomplished, I take the critique of modernity and apply it where it is genuinely effective and relevant.

As an example of the difference, an anarcho-primitivist declares that we should deindustrialize society. A policymaker will then ask him how we can do so without killing 90+% of the human population. The anarcho-primitivist will declare that this is the price we will have to pay to preserve a habitable planet, but if the policymaker doesn’t want to go ahead and do the right thing, that’s fine too because civilization will collapse due to peak oil eventually anyway. The policymaker will blink and move onto the next intellectual in the audience, who wants to know whether he works for our Reptillian overlords or not, because there’s a 240p video on Youtube where it looks like he shapeshifts.

At a metaphysical level, the mistake I made was to assume nature and technology must per definition exist at odds with each other. As Pentti Linkola puts it, “In the history of mankind we witness Nature’s desperate struggle against an error of her own evolution”. This is the old Christian fall from paradise theology, except it imagines a female deity (Gaia) rather than a cruel patriach. The world was perfect when we were born into it, we screwed up and now have to suffer on our own. Christian theology is evil, because it imagines humans as intrinsically geared towards a positive feedback loop of self-exacarbating evil (inherited sin) in a benevolent universe. Radical environmentalism takes Christian theology and swaps the deities and sins.

A better perspective is to treat technology as an outgrowth of nature. Life came into existence through a blind watchmaker, evolution, who incrementally improved the world and gave birth to greater complexity. At some point these organisms became complex enough to be able to think ahead and began to further enhance the world around them, at first for their own individual benefit, then for our species as a whole, but now for the benefit of all life on Earth.

The anthropocene has increased biological diversity by spreading species across the globe. The evolutionary pressures created by human beings encourage the proliferation of more intelligent animals. seaweed plantations, artificial coral reefs from sunken ships and artificial oyster reefs from wind farms spread life throughout the ocean. As Lynn Margulis once said, Gaia is a tough bitch. If you take an old batch of sourdough and kneed it thoroughly, you don’t kill the life inside. You spread it around.

A mature critique of technology needs to recognize that we’re dependent upon technology and that this is not intrinsically evil, but that we must carry out our use of technology in a manner that takes its destabilizing impact on the environment and society into proper consideration. We don’t have to be fundamentalists, to comprehend that the fastest pace of ocean acidification in millions of years is going to be profoundly harmful for life on Earth. The problem here however is not technology, but how technology is put to use. Technology is used to satiate the desires of the man who is not smart enough to invent it, but merely smart enough to use it.

So what does an appropriate technology adherent like me want? Well, consider this. There are people who travel around in giant steel boxes that sometimes kill people directly, more often kill millions indirectly through fine dust that enters our lungs and will probably kill billions of people near the end of this century by making the world much warmer than it used to be. On the other hand, there are people who travel around on steel bars with wheels, propelled forward by the power of their own legs. They stay in shape by using their legs, generally can’t kill people by hitting them, emit no fine dust and don’t make the planet warmer. You can fit a dozen of them into the space where you can fit two big steel boxes and you can easily stack them on top of each other. You can buy a hundred of them, for the same price as a big steel box. One of these is a useful modern technology. One of these is a device that exists primarily because it demonstrates our power over the world around us.

What are some other things appropriate technology adherents like me want? Well, there’s a digital currency out there you might have heard of, that was supposed to turn into a cheap and decentralized payment system. Instead it’s now controlled by a Chinese cartel, consumes as much electricity as Austria and processes three transactions per second, most of which consist of autistic libertarians trying to scam each other. I don’t claim to be a genius, but I think that before we start banning plastic straws and implementing one child policies, we need to consider whether there’s some low hanging fruit out there that we’re not paying attention to. Sometimes dumb people end up stuck, using systems that don’t work properly and impose massive burdens on the rest of us. Big government doesn’t let you spray DDT or use whale oil to illuminate your house anymore either.

There’s another issue where the philosophy of appropriate technology is useful to consider. The company I work for has more money than it knows what to do with. You can give everyone a raise, but that doesn’t buy you loyalty, it merely leaves you with long-term obligations. Instead, the company decides to fly everyone to the other side of the world in the middle of winter, to lay on a tropical beach on an island somewhere near the equator. This is what I would refer to as a waste of time, money and scarce resources, so I’m not going to attend.

Personally, I just came back from a small trip to Brussels by train and I want you to take a short look at the world’s ugliest graph, that I just made to illustrate a point I want to make: 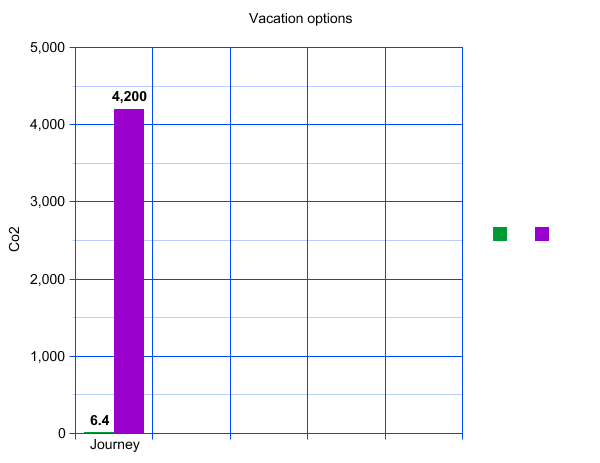 On the left, at 6.4 kilogram of CO2, you witness my journey by train to Brussels for three days. I’m using the regular Dutch mixture of electricity here, although the Dutch train company makes sure to pay for green electricity. On the right, at 4200 kg (or 2190 kg without radiative forcing), you see my company’s idea of a good time. Although they normally spend the best forty hours of the week inside an office staring at a screen, they insist they need some sunlight during the (not particularly harsh) Dutch winter. I can take 656 trips to Brussels, or I can take one trip to [Insert tropical island that won’t be mentioned by name here]. I’m sure a random tropical island must be fun to visit. But is the island 656 times as much fun as a trip to Brussels is? You don’t need to be a deep ecologist anarcho-primitivist mail-bomb sending lunatic to consider this a waste of energy. You just need to be non-retarded.

“But you can offset your carbon emissions!” I hear you thinking, reminiscing of your Facebook-profile-photo excursion to the depths of Africa, in search of smiling orphans willing to join you for a selfie. Well, here’s the deal. Your carbon offsetting project that you poured your money into isn’t sucking carbon from the air and putting it back under the ground where it belongs. What all carbon offsetting projects have in common is that they revolve around convincing other people not to emit carbon. It’s the equivalent of killing a whale and giving five native Alaskan men  some dimes if they promise not to kill a whale. Eventually we’d have more people killing whales, than people who can be bribed to kill one less whale.

The other option we often see is that we can plant trees, but there’s no guarantee the trees will still be around fifty years from now, they can perish in droughts and forest fires. In addition, we eventually run out of space to plant new trees. The reality is that most of the fossil fuels underground now need to stay where they are, without being burned by human beings. Don’t use them if you don’t really need to (carbon offsets are a dumb excuse) and help us transition to alternatives. Use energy in a prudent manner, in appreciation of the natural limits within which all of life needs to operate.

It’s not wrong to use technology. It’s wrong to use technology in a manner that does not take into consideration the impact its use has on other people and animals. With great power comes great responsibility. The problem is not the power we have, the problem is the lack of responsibility we take when it comes to our use of power. We point fingers at each other, resort to fatalism and make excuses for our own greed. I hear numerous times from dumb greedy people that the genuine problem we face is overpopulation. And yet those same people tend to insist on outlawing abortion (Brazil’s president comes to mind here) and don’t donate a single cent to charities that give contraception to women without access to contraception.

For me personally, I have arrived at a more balanced perspective. I don’t genuinely think civilization is going to collapse in my lifetime. I think we’re probably going to overshoot 1.5 degree Celsius, whether that leads to the death of the coral reefs depends on how ignorant we are. Hint: Quit pussyfooting around and spray some sulphate aerosols over the Great Barrier Reef when days with record temperature seem to come up. Most importantly, I think we are going to have a better fighting chance when we dare to engage the real world, rather than arguing in defense of forgotten golden eras against the caricatures of our own creation.