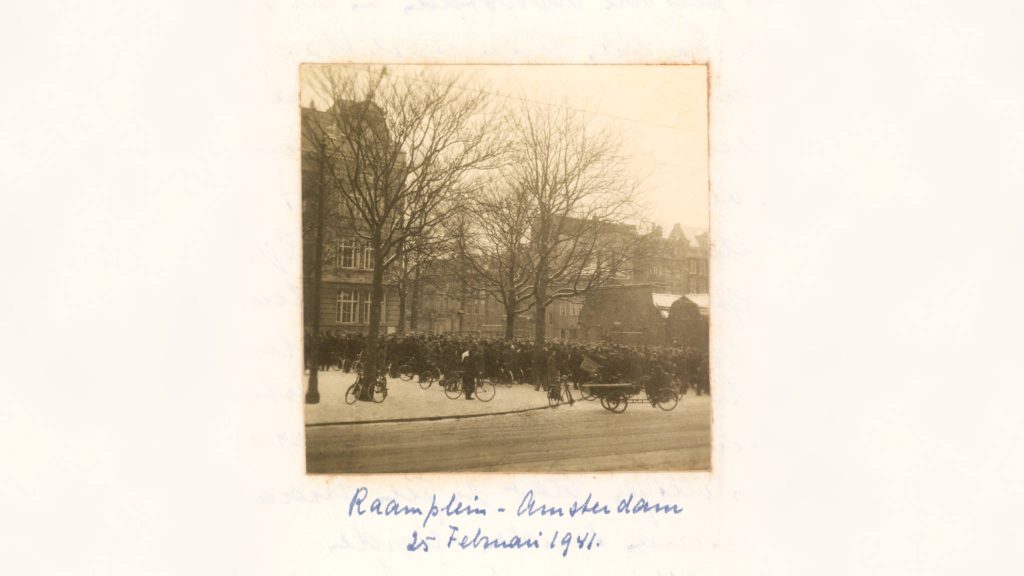 I’m fascinated by tales of heroism. What makes people stand up against injustice and oppression, when they stand nothing to gain themselves and when the odds are overwhelmingly against them?

Generally speaking, I think what defines them is that their worldview isn’t based on ideology or what allows them to climb the social ladder, it´s based on what makes sense to them. They know in their hearts what´s right and wrong.

To say that this was a communist revolt is a bit unfair in my opinion. It´s mainly a low status revolt. Communism was simply the ideology low status Dutch people in the 1940´s used on the basis of which to organize themselves.

The protest was set up by two men: A garbage man and a construction worker. Yes, that´s shocking to me too. I would have assumed the only non-Jewish revolt against the Holocaust would have been set up by a BIPOC American queer feminist college professor with thick-rimmed black glasses who smells like cat urine, as opposed to two Dutch cishet white men covered in dirt.

Willem Kraan laid brick pavements for a living. On sunday 23 february, this day in 1941, he wandered to his buddy Piet Nak the garbage man, with tears in his eyes, because hundreds of Jewish men were being rounded up in the Jewish neighborhood in Amsterdam.

So, these men decided that they were going to organize a strike. They began distributing pamphlets with their comrades. Here you can see one of their pamphlets:

Most Dutch people are vaguely aware of this strike and a handful of Jews and historians outside of the Netherlands know about it. I really can´t emphasize enough how extremely based the whole series of events is. Note for example what it says in the above pamphlet: ¨Relieve the Jewish children from the Nazi violence, take them up into your family.¨

What I really like about the pamphlet is how it just demonstrates an example of working class solidarity without the identity politics of the modern left: ¨Show solidarity with the heavily affected Jewish part of the working people.¨ And also: ¨You have in your resistance without a doubt a large share of the German worker-soldier population with you.¨

I´m not a fan of communism, but I can´t blame working class Dutch people in the 1940´s for being communist. My grandfather was a communist too. Working class people were not yet aware of how miserable of a system it is back then.

I don’t think it’s correct to characterize it as a communist strike. What characterizes the strike is how bottom-up this phenomenon came into existence. Rather, the communist party served as an instrument that the Dutch working classes used to revolt against something they found viscerally reprehensible.

The strike started on 25 February 1941. This was earlier than the organizer had planned for, the working people began their revolt spontaneously in response to seeing the pamphlets. The next day it spread across the country, 300,000 people around the country participated. The German troops responded by opening machine fire, nine people died. After dodging machine gun bullets the Dutch working class must have felt somewhat disillusioned, it kind of brings home the message that the odds are overwhelmingly stacked against you.

In the 21st century, the trend I notice is that the urban bourgeoisie wants to shift the blame for historical atrocities towards low status people. ¨There are some uneducated racist rural white people left, but when those people drop dead, the problem is finally solved.¨ That’s the kind of mentality you see peddled on Twitter.

Unfortunately I can’t copyright this, but I firmly believe that All Blue Checks Are Bastards. If you want to find decent people, you have to look towards those who listen to their heart, as opposed to those who are motivated by a desire for status and an eagerness to climb the corporate ladder.

Their names were Willem Kraan and Piet Nak. They were simple men, a construction worker and a garbage man. They were no natural leaders. Willem was martyred during the war, Piet survived the war but ended up offending and alienating just about anyone he met. What they were, were men who could not tolerate cruelty and injustice.

Piet eventually abandoned the communist party after the war, angry about how they claimed the revolt as theirs and used it to score cheap points. The question to ask ourselves is: Who can rightfully claim the February strike as their legacy?

If you asked me what I truly believe, I would tell you that I believe the anti-lockdown protestors in the Netherlands can claim the strike as their heritage. I believe this, because the protests are bottom-up, dominated by working class Dutch people and founded in a personal rejection of authoritarianism and irrational cruelty, the two main ingredients of Nazi antisemitism.

I understand that not everyone would feel this way and it will be hard to persuade people of this position. In a broader sense, I would argue that all working class Dutch people who believe themselves to stand against oppression and injustice can rightly claim the revolt as part of their heritage.

Working class white men generally stand somewhere at the bottom of the social hierarchy in our modern society. You’re held responsible for historical atrocities, because you take pride in your cultural heritage. Simultaneously, you’re looked down upon for being poor. White children deserve and need to grow up with an identity they can take pride in, just like children of all other cultures.

You should see the endless barrage of hatred that working class white men receive on social media like Twitter, from our highly educated cultural elite. In academia, they’re taught to feel ashamed of themselves. Companies like Coca Cola teach them to “try to be less white”. You should think of the impact that has on people’s mental health, when they are taught to feel ashamed of themselves.

Against all of that, I would point out that when mass societal hysteria lead to an unimaginable cruelty against a group of people who had done nothing to deserve it, our society depended on two poor white men to rise up against the injustice: A construction worker and a garbage man.