By now, you might have heard of what is referred to as “the great stagnation”. A short and easy explanation is as following: We throw growing amounts of money at various economic sectors, while the actual rate of progress continues to diminish. A related term is cost disease, the observation that expenses in many economic sectors continue to increase, while the achieved results remain the same or grow worse.

An example of the great stagnation is the declining progress in years of life saved through medical trials: 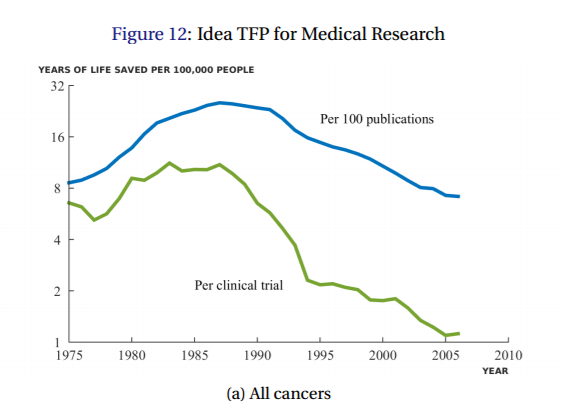 Another place where you’ll encounter the great stagnation is in education. Expenses rise dramatically, while the results of students have stagnated:

It’s a phenomenon observed in many different aspects of society. The one place where progress seems to continue at a pace we’re familiar with is in IT. Peter Thiel has recognized the great stagnation and devoted his wealth to encouraging progress and innovation in sectors outside of IT. He founded Breakout Labs, which is meant to encourage innovation in sectors that have reached a point of stagnation. It’s worth noting what Peter Thiel has to say about the stagnation:

Today’s aged hippies no longer understand that there is a difference between the election of a black president and the creation of cheap solar energy; in their minds, the movement towards greater civil rights parallels general progress everywhere. Because of these ideological conflations and commitments, the 1960s Progressive Left cannot ask whether things actually might be getting worse. I wonder whether the endless fake cultural wars around identity politics are the main reason we have been able to ignore the tech slowdown for so long.

There is not one single explanation for the great stagnation. One noteworthy problem is that institutions dependent on government subsidies without the kind of quality control enforced by the free market can continue to grow their expenses without a need to demonstrate an increase in their accomplishments. As an example, governments fund education, because it’s assumed education will increase meaningful employment for students. Colleges however don’t receive subsidies and tuition money based on how much they increase their students’ earnings. When it comes to earnings after graduation, colleges fudge the numbers and students don’t typically pay careful attention before picking a college or a subject to study. There’s simply no effective quality control mechanism, whereas the competitive free market serves as a quality control mechanism for most private companies.

The bigger problem I think is the manner in which most economic sectors have become dominated by people who are qualified and disciplined, but not particularly competent or innovative. The reason IT has seen such massive economic growth, is because IT is an economic sector where competent and innovative people can succeed, without the need to be qualified or even disciplined. Bill Gates once said he would always ‘hire a lazy person to do a difficult job’ at Microsoft, ‘because a lazy person will find an easy way to do it’. In most economic sectors, the opposite is true. Government departments and the quasi-governmental sector in particular look for people who are qualified and disciplined.

Those people generally don’t seek to prove their relevance to society through great achievements. Rather, the qualified and disciplined people seek to justify their positions, by excluding those who are not qualified and disciplined, but competent and innovative. As an historical example, consider the case of Ignaz Philipp Semmelweis. Semmelweis proposed that doctors should wash their hands before delivering children, as he noticed mortality was higher among doctors than among midwives. The doctors delivered children after dissecting bodies. Semmelweis lived in an era before germ theory and could come up with no plausible explanation how the doctors cutting open bodies could transmit disease to pregnant women. Semmelweis’ call for hygiene was dismissed and he became depressed. He was committed to a mental institute, where he died after fourteen days from a beating.

Modern medicine is none different. As an example I find noteworthy, have you ever wondered why IVF clinics give women DHEA to increase their ovarian reserve? This is done, because a woman who was told she had insufficient eggs left to have a child set out on her own to find a solution. She read the medical literature and began taking DHEA on her own initiative. After a few months, her egg count had risen dramatically and she could have a child.

Most of the big innovations in medicine these days are not made by experts, but by sick people who decide to self-medicate and manage to achieve success. Sometimes the doctor is enthusiastic about his smart patient, but most of these people tend to be dismissed by the physicians who treat them. The reason they’re dismissed, is because their existence is an embarrassment to medicine. The doctors take pride in having a special status bestowed on them after years of training and education, only to find themselves unable to treat a patient who is nonetheless capable of treating himself. This is a profoundly humiliating experience for these doctors.

A noteworthy example from my own country is Willy Witsel. He refers to himself as “Pilly Willy”. This man suffered cardiomyopathy and was told he had a few more months to live at most. He set out to develop his own treatment, consisting of conenzyme Q10, magnesium, carnitine and other supplements. The treatment worked, he was the only one out of 132 cardiomyopathy patients who survived. He told his doctors about his method but they were not interested, so he went on to set up his own website where he explains his methodology. Keep in mind that the guy is still around today, nineteen years after being diagnosed with cardiomyopathy and being told he has a few more months to live at most. What is his own occupational background? He has zero medical training, he worked in IT for forty years of his life.

The reason we’ve seen very little progress in medicine, is because people like this tend to be dismissed. Consider another example of a man pursuing radical breakthroughs in healthcare: Aubrey de Grey. Aubrey de Grey received no formal medical training. Rather, he is a computer scientist by profession and was eventually awarded a Phd for a book he wrote outlining his views on aging. He should be thought of as an autodidact Aubrey de Grey has been shown to be correct in many important aspects of his work. He classifies aging as a phenomenon consisting of seven different types of damage incurred by humans over time. By now, therapies have been developed that manage to treat some of these different types of damage. Within the field of medicine he has many critics however, who insist he has no idea what he’s talking about because he hasn’t performed experiments himself.

The big issue we face in today’s society is that many economic sectors have become dominated by what should effectively be thought of as modern day guilds. The guilds allow entrance into the guild, based on submission to the guild members and their training and procedures, often at great expense of course. As an example of a modern day guild, consider the legal occupation in the United States. Most supreme court justices in the 19th century didn’t go to law school, many even had no college education at all. By now however, people aren’t even allowed to take a bar exam without a law degree. The bar associations in 49 states have eliminated the apprenticeship and self-study option for becoming a lawyer.

The solution to this problem is to dismantle the cartels. Anyone who can pass a bar exam should be free to call himself a lawyer and to practice law. In a similar manner, monopolization of scientific research should be addressed. In many countries programs are implemented to allow people to apply for jobs anonymously, to obscure the applicant’s gender or ethnic background. Similar programs should be implemented however to allow people to perform scientific research anonymously. Scientific journals should judge papers without knowing who submitted the particular paper. A scientific innovation by a forty year old neonazi or a fifteen year old high school student is still a scientific innovation.

My expectation is that medicine and many other economic sectors could see the same type of economic growth and innovation seen in IT, if the barriers to entry were as low as they are in IT. A group of nerds can start an IT company in their mom’s basement. In contrast, to develop any sort of medical innovations requires costly clinical trials, experiments on lab animals and overcoming various legal hurdles. It’s perfectly true that the risks are bigger in medicine and these hurdles exist for a reason. However, the hurdles also create a perverse incentive. Just as the Wright brothers felt more interested in suing people building airplanes that resembled theirs, rather than coming up with better airplane designs themselves, pharmaceutical companies can protect their own privileged position by creating hurdles that can only be overcome by those with large amounts of capital.

To overcome the great stagnation, measures will need to be implemented that reduce the barriers to entry. One step in the right direction would be to shift from giving young people student loans, to giving them lump sum payments that can be devoted to their own investment plans for their future. As an example, Peter Thiel gave Vitalik Buterin a lump sum of money that allowed him to drop out of college and focus on developing Ethereum. For other people this would allow them to study from home to pass the bar without having to attend college, as was common in the 19th century. If we insist instead on developing modern day guilds however, we’ll find ourselves stuck with a pace of innovation and economic growth equivalent to the medieval era.