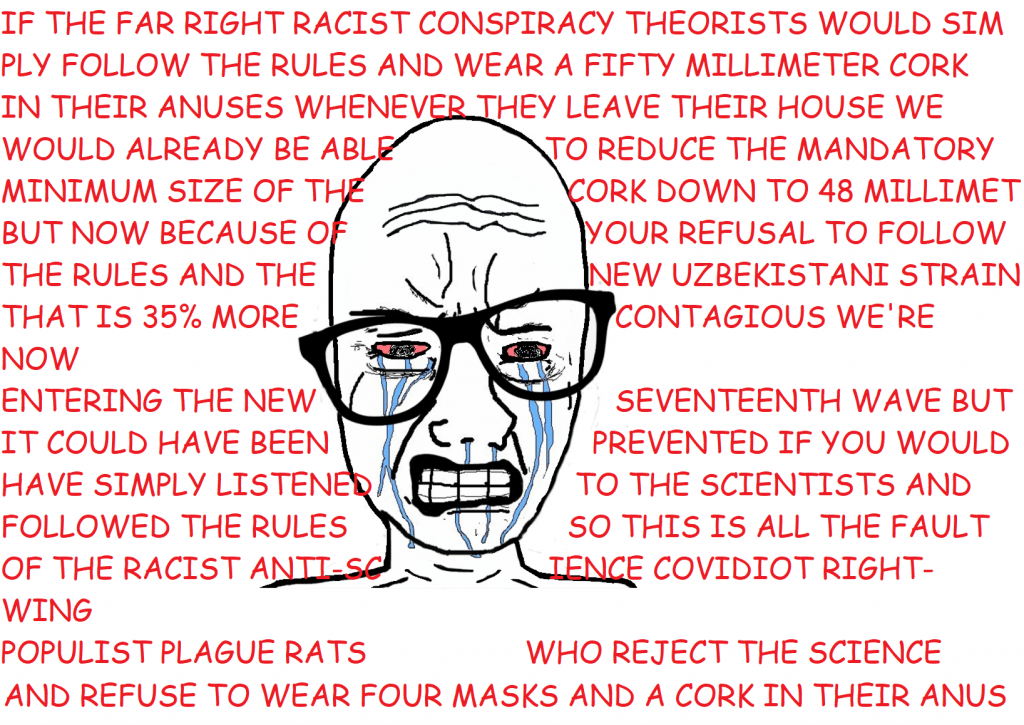 Before the vaccine: Even mild cases can still give you permanent lung damage and long haul COVID and make you infertile and impotent! STAY THE FUCK INSIDE!

After the vaccine: Alright well you can still get infected but that’s ok you’re protected against severe COVID so you’re not hospitalized and mild COVID is now no longer super dangerous and it’s now ok to get infected after being vaccinated even though nine out of ten COVID deaths in the UK are in fully vaccinated individuals. Why? The science changed alright! It’s an evolving process, geez!

Before the vaccine: Once we have most of the population vaccinated this is over.

Before the vaccine: Hey as soon as you have your first shot you’re pretty well protected. Hurry up and get it!

Before the vaccine: Don’t worry this was all properly tested, it’s safe!

After the vaccine: Yeah uh, if you’re under thirty, you should not get the Moderna one. Yeah, I know, we already gave that one to millions of people under thirty. Yeah uh, next question please!

Before the vaccine: Deaths are actually much higher than they look, if you look at excess mortality! They’re hiding COVID deaths!

After the vaccine: Yeah uh, those excess deaths are because of delayed care. And some of them are due to COVID. No wait, they’re not due to COVID, because that would suggest the vaccine made no real difference. Oh, no wait, they’re definitely not due to the vaccines. Are they unvaccinated? Then they’re due to COVID of course, stupid science-deniers digging their own graves. They’re vaccinated? Oh. Wait, it started in the summer and it’s strangely correlated with the vaccine schedules? You know what, “excess mortality” is a far-right racist dog whistle from now on!

Before the vaccine: Look at how many people died in Sweden, compared to Norway and Denmark and Finland! They killed thousands of people, by not enforcing lockdowns! No you can’t compare Sweden to other European countries, only to other Scandinavian countries!

After the vaccine: YOU CAN’T COMPARE SWEDEN TO ANY SINGLE OTHER COUNTRY ON THE WHOLE GODDAMN PLANET! SHUT UP ABOUT SWEDEN!

Before the vaccine: Look at how great Australia and New Zealand are doing. We could have been like them, if we had simply acted earlier and did track and tracing!

After the vaccine: IT’S NOT A CONCENTRATION CAMP, IT HAS A SWIMMING POOL!

Before the vaccine: Mandatory vaccination is a QAnon right wing populist conspiracy theory.

After the vaccine: One year jail sentence if you won’t get the shot, take it or leave it.

Before the vaccine: We need to make sure that people in Africa also get the vaccine because otherwise it’s not fair and a lot of people are going to die.

After the vaccine: Yeah Africa seems to be the only place where people are not dying of COVID. Yeah, it’s also the only place where practically nobody got the vaccine, because we ended up not giving them the shots after all. It’s a scientific mystery, we don’t understand it, but don’t worry, we’ll come up with an explanation eventually! No, it has nothing to do with exercise, sunlight, ventilation or healthy plant based nutrition, don’t jump to conclusions.

Before the vaccine: Don’t worry, we’ve almost solved this.

After the vaccine: Yeah, more people died from COVID this year than last year. Yeah, everyone is constantly getting infected. Yeah we said last year that simply getting infected already cripples you. But look. There’s this guy named Uncle Bob somewhere in the Mississippi delta. He has four teeth left, drives a pickup truck with a confederate flag, dropped out of kindergarten and votes for Donald Trump. He has really problematic opinions about people of colour and doesn’t know how to pronounce Latinx. This man refuses to get the vaccine and is thus a variant factory who constantly keeps churning out new variants and causing breakthrough infections in fully vaccinated and boosted people like you.

The point is: We could have solved this problem for you, but the reason we were unable to solve it is because of the remaining 20-30% of the population who don’t do exactly what we say and want to take away our power over you. Those people are the reason this continues, but you can help end it by marginalizing those people.

Before you start blaming us, for giving you vaccines that don’t work, for organizing the largest wealth transfer to the Silicon tech moguls in history, for funding gain of function research in Wuhan, for marginalizing people who don’t want the vaccines, for artificially causing staff shortages in hospitals and nursing homes by firing the unvaccinated or for sending sick patients directly into nursing homes, I would turn it around and ask you: What have you done exactly, to convince your racist Uncle Bob to get vaccinated? If the answer is “nothing”, then you only have yourself to blame, not us.