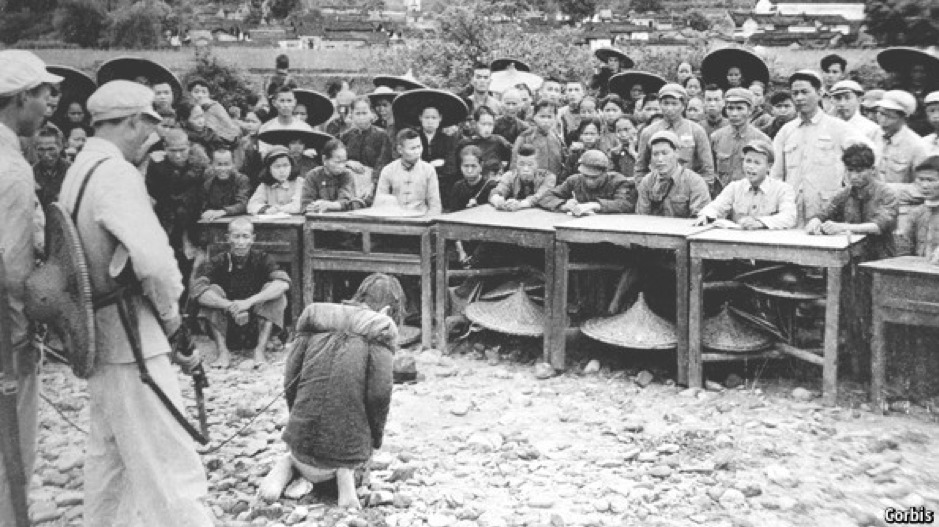 A landlord tortured in Maoist China before being murdered.

Reading is hard. Trust me, I know. Writing is easier, because it doesn’t require the same self-control and humility that reading does. Even so I would still recommend it. Don’t read on a screen, the distractions are too nearby. Turn off all screens, unless you’re in a noisy environment, in which case I recommend some background noise.

If that’s not enough (it’s not enough for me), microdose some mushrooms or perhaps some mescaline, depending on what’s most compatible with your own neurochemistry. With a high dose of mushrooms I feel stuck in a computer simulation where any moral failure could lead to extreme punishment, with a microdose my brain feels like it’s being massaged and I can read a book. This is the method I used today to read Siddhartha by Hermann Hesse, which is probably the first meaningful thing I’ve accomplished in days. I very much recommend reading it, but it’s world literature, so this shouldn’t come as a surprise.

It’s this last form of inequality that has generally led to massive violence and resentment. We generally don’t kill all the pretty people, but from time to time, we do decide to rise up and kill people who inherited a lot of wealth and status. The reason we don’t constantly kill wealthy people, is mainly because of religion. To paraphrase Napoleon, religion is what keeps the poor from murdering the rich.

The thing I would argue is that this is a good thing. We’re better off with a world where we can accept that some human beings are better off by virtue of the circumstances of their birth than others, because that’s inherently just the way things are always going to be, unless we wish to start redesigning the human species. In the old days, we had a pretty simple way of answering this mysterious inequality of birth: This is the way God wanted it.

Perhaps you’re born at the bottom of the social totem pole, to toothless opioid addicted Trump-voting hicks in rural West Virginia, whereas someone else is born as the niece of Kamala Harris, your blue-checked Twitter account registered on your behalf before you learn how to tweet. There’s no point in complaining about it, you’re better off trying to figure out why you were born in this situation and accepting God’s divine plan.

This is generally what the cultural elite of the 18th century argued, particularly in the United Kingdom. The most famous example is perhaps Alexander Pope’s famous poem, Hope Springs Eternal. Because we can’t know God’s purpose, we can’t complain about our position in God’s Great Chain of Being. You can find the poem here, it’s pretty interesting. Voltaire was initially quite enthusiastic about it, then later on he changed his mind, wrote Candide and the general attitude in France among the thinking class became that we could improve over the divine order. We all know what happened next.

There are a number of problems with trying to address inequality. The first problem is that in every revolution, the revolutionaries realize in the back of their minds, that they are revolting against a divine order. In Mao’s China, a rural peasant could abandon his heritage, become a Marxist guerilla and participate in murdering the landlord for whom he used to work.

But does that cure your anguish? No, it doesn’t. It doesn’t answer the following question: Why were you born as a peasant, whereas the landlord you murdered was born into a wealthy family? If you and your neighbor both have an apple tree, but yours develops brown mushy rotting apples, while his grows perfectly fine specimens, you can secretly harvest his apples while he is asleep. Will that make you feel better? It won’t. It solidifies the insult to your pride that you’re revolting against. Communism erodes the noble qualities of your soul, the youthful hubris of revolutionaries causes them pain in old age.

Evil exists in our world because God has no other way of showing us why the world functions the way it does. According to Leibniz, God created a world in which the bare minimum of evil exists that is necessary, the greatest of all possible worlds. Insofar as we can accept the world as God created it, evil is kept to a minimum. If we start trying to figure out why it works the way it does, if we start trying to perform a better job and addressing the unfairness, we generally end up making it worse. That’s the story you find in Genesis as well, where the serpent invites Eve to eat fruit from the tree of knowledge of good and evil.

Terence Mckenna said that the bigger you build the bonfire, the more darkness is revealed. That’s how it seems to work with evil. With every attempt we make at addressing the inequalities of nature, the more new inequalities we produce and the more evil we invite upon ourselves. Life has always had injustice, but human beings sought to work with it. Although social class for a young woman now means very little, in the Instagram era beauty has now come to mean everything. Inequality hasn’t been removed, it’s now just rubbed in our faces in a different manner. Physical suffering has been mostly eliminated in our era, but psychological suffering has taken its place.

As you search for the meaning of your life, it’s important to avoid falling into the trap of rigid dogmatism, because then you will find yourself believing you have found the answer, without understanding why it is the answer. I think the essence of dogmatism is obeying a rule without trying to understand why the rule exists. It’s perhaps the biggest obstacle to wisdom. If you think you have the answer because you follow a rule, even though you don’t truly comprehend the rule and just trust that the rule exists for a reason, then you don’t have the answer.

This is what I’ve noticed with most of the Traditionalist Catholics. I am a traditionalist myself, in the sense that I think all of the world’s major religions exist for a reason, as part of God’s plan. After all, God would not allow something so significant to come into existence for trivial reasons. However, their rigid dogmatism means that they are completely obsessed with the style and superficialities of Christianity.

In contrast, they seem to draw very little inspiration from the actions of Jesus: Insulting the pharisees because they dissed him after he forgot to wash his hands, chasing moneylenders out of the temple, touching people with leprosy, falling in love with a prostitute (inb4 that’s not scriptural, the real Jesus lives in our living tradition, not in scripture). His actions mean everything to me, his words mean very little for me. What’s more interesting to me is how people react to those words.

That’s why you should always try to drink from many different wells, it prevents you from slipping into dogmatism. I recommend reading literature, taking psychedelics and reading religious scripture. Literature about the smaller questions in life has a short shelf life, but literature about the larger questions in life tends to have an expiration date far into the future. Siddhartha is such a book. It’s a story about a young brahman named Siddhartha who lived simultaneously with the Gautama Buddha and seeks wisdom. He seeks out many different masters, none of whom can transfer their wisdom to him, because true wisdom can’t be conveyed with words. In the end, he can only find it within himself.

The benefit of growing up in poverty is that it teaches you humility. Humility, in its essence, is the ability to be content with very little. One way to look at enlightenment is as a state of perfect contentment with nothingness. I’m not really poor anymore today, but I’ve lived in poverty for long enough for material possessions to have little appeal to me. I promised my friend I was going to buy a mechanical watch, but I just can’t get myself to do it. At this point, my assets serve the purpose to me of allowing me the opportunity to seek what I’m looking for without the interference of work that functions as an obstacle. The most happy moments since I quit my job have consisted of meditating in the forest entirely sober, as the wind brushed up against my skin.

I’m quite convinced that you will live through multiple lives. If you disagree with me, then I think we mainly have a different vision of what the word “you” means. The fact that there are wealthier, happier or prettier people out there doesn’t upset me, because I trust that I will simply go through whatever type of life I should go through. In that sense I am content.

However, as Siddhartha explains, relinquishing passions and attachment is not the whole story. The Buddha teaches him to dissociate from the world, to find liberation by making the world meaningless to him, but he appreciates the natural beauty of the world around him too much to fully commit to that vision. That’s why he sinks back into passion again, taking inspiration from the animals around him. In the end, despite bringing him pleasure, this attachment also leads to grief again.

The book ends with Siddhartha meeting an old friend again, who became a Buddhist monk. The monk did not find what he searched for, but Siddhartha did and so he conveys some of his own lessons to him. I’m not going to spoil these lessons for you, because then you’re not going to read the book.