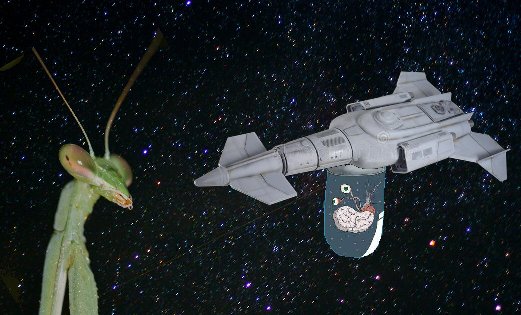 “Um, excuse me, what are you doing here exactly?” The figure of a Praying Mantis that had appeared before him communicated to Cyberbezos, when the AI-operated exploratory drone with which his own nervous system had merged arrived near the border of Beta Centauri.

“Hello, I come in peace.” He spoke in his spaceship. “Good for you, but that doesn’t really answer my question. What exactly are you doing here?” The Praying Mantis-like aliens communicated again, blasting their message into every one of his senses as if they had hijacked his nervous system directly. “I came here to discover an answer to the question that has occupied my species since time immemorial: Is there other intelligent life in the universe?” He replied.

“And this was the best way you could think of, to answer that question? Seriously?” They asked. “I understand that our technology may not be as advanced as yours yet, but hopefully that won’t prohibit us from seeing each other as equals, deserving of the same basic human rights as individuals of our own species.” He added, now a little nervous.

“What’s going on here exactly? Did your kind just never learn about chemistry?” They asked. “We did, that was essential for me to make it to your planet.” He answered. “Oh so you’re just extremely materialistic types I suppose? That’s tragic.” They responded to him. “Sorry, I’m afraid I don’t comprehend you.” Cyberbezos replied.

“Look, you’re literally the first vessel we’ve had to stop in twenty thousand years from approaching our gravitational zone. Heaven knows what sort of microscopic organisms your vessel contains. We’ll figure out within a few minutes through algorithms how to protect our own physical bodies against them, but it could decimate the biodiversity of our own planets.

That’s the point I’m making here. To us it looks like you’re trying to… how do your bipedal ape-brains call this… kill a fly with a sledge-hammer. You wanted to contact some praying mantis type of intelligence? Well you could’ve just picked up the phone, like any other entity in the universe. How do you apes communicate on your own planet? Do you just build giant megaphones that you use to yell from one continent to another, deafening anyone within a 20 mile radius of the megaphone?” The praying mantises asked.

“Well that was another project I was working on back home yes, but I shelved it in the end.” Cyberbezos answered. “But look, I get it, we’re backwards. We never figured out how to travel faster than light, I caused massive carbon emissions when I built and launched this vessel, it’s imperfect, I’m aware of that. Again, we’d love to hear about your superior technology.” Cyberbezos continued.

“Hold on there for a minute, apey-boy. Looks like we’re getting a call from your home planet.” The Praying Mantises answered. Cyberbezos was shocked to hear about this. Had his people developed new technologies since he had left? He remembered the human population was decimated by pandemics, climate change and peak oil. That’s why he fled into outer space, along with other immortal billionaires, each going their own direction. Had civilization recovered and made new dramatic scientific breakthroughs?

As he waited, his nervous system entertained itself by playing 3Dimensional Go against the AI with which it had fused, as various fleshy protusions watered the biodynamic garden Cyberbezos had constructed within his ship to preserve endangered species from his home planet.

“Alright there ape-boy. I’m done. Where were we?” The Praying Mantis hivemind asked. “I must admit I’m amazed to hear you received a call from my planet. Can you please tell me more about it?” Cyberbezos communicated to the praying mantises.

“Oh, I don’t know why you would care. Just the usual. Some guy in a van by the side of the river in Colorado who asked for help in overcoming his opioid addiction and his childhood memories of his creepy football coach. You know, the usual.” The mantises said.

“I’m sorry?” Cyberbezos asked. “Like I said, the usual. Some 54 year old high school dropout who lost his job in the steel mill a few years ago, traveled in his van to Colorado, injured his back carrying something heavy in one of your old warehouses, started taking opioids, became addicted, heard about the Deemz, smoked a bit of it and accidentally ended up in our place. Hey, we don’t mind, they don’t know any better, I’m happy that guy didn’t end up encroaching on the reptillians, it could’ve been worse.”

“The Deemz?” Cyberbezos implored. “Yeah, you heard me right. The Deemz. The Spice of Life, N-N-Dimethyl-Tryptamine, the intergalactic information highway, the internet of consciousness, whatever you want to call it.” The hivemind responded.

The nervous system now began to dig through its memories, everything it knows, everything it ever recorded. And somewhere after a few seconds, it stumbled upon something Cyberbezos wasn’t expecting to find itself looking for. 31 December 1984 CE, 11:30:43PM Eastern Time. A young Jeff Bezos is sitting on a couch in a student apartment somewhere, he can’t remember how he got there or who he’s with.

The guy sitting next to him on the couch, a young man with long curly hair who wears a Metallica T-shirt and smells like cannabis, asks him whether he wants to try some. “No thanks, I’m not into meth” Bezos responded smugly. “Dude… this is the best stuff you can imagine. It’s DMT dude. You’re gonna see aliens and shit man. I swear. Just try it, I swear, you’ll love it. Just try it bro.” The guy responds.

Cyberbezos snaps out of his memory. “You’re telling me that this is what you use to communicate?” Cyberbezos asks. “Well yes, sort of. I mean it’s like how most of your food is water. That doesn’t mean your kind lives off water, it just means it’s the main ingredient for a human. Similarly, the intergalactic information highway, is mostly driven on by organisms that flood their nervous system with N-N-Dimethyl-Tryptamine.” The Praying Mantises explain.

“I mean sure, it’s not the only thing. It’s the fuel for the rocket ship, so to speak. Almost all organisms use N-N-Dimethyl-Tryptamine, or a very similar Tryptamine. They generally meditate, they use a combination of lights and sounds to help guide them to the proper destination.

There is some variation, sure. The Octopodi on a water-moon somewhere in your ancestral solar system who evolved around fifty millions years ago and went extinct again recently seem to prefer an obscure deuterated variety of N-N-Dimethyl-Tryptamine that they produce themselves. I really miss those eight-armed lunatics, but hey, they’ll come back into existence again at some point. Anything that can happen, will happen, repeatedly. Our job is just to make sure it happens to those who are ready for it, if you get what I mean.

There are many tribes that go for a combination of N-N-Dimethyl-Tryptamine combined with a monoamine oxidase inhibitor that grows in their local tropical environment so they can communicate with the plants around them. I get it that this doesn’t have much appeal to you, but others use synthetic monoamine oxidase inhibitors, you can talk to droids in that manner if that’s the sort of stuff you’re into.

If you’re a masochist you mix the whole thing with some Cobra venom that blocks your acetylcholine receptors and then you can talk to your favorite demons that will try to convince you to set your house on fire and stick broken glass in your anus. Most people however seem to add some mild GABA positive allosteric modulators like Ethanol and some Psilocin and then they meet us, the friendly neighborhood Praying Mantis entities. We’re pretty easy to find because we’re so numerous, the real geniuses figure out how to talk to the Orangutans, they’re shy.

And then every few thousand years or so, we get a physical visitor like you, confused and often terrified. Almost always some tech billionaire who figured out the secret to physical immortality and left his home planet behind, typically you guys tend to leave once the permafrost began to release enough methane so that even the biggest idiot could suddenly see it wasn’t going to end well.” The Mantises answered.

“Wow. I think I need some time to process this.” Cyberbezos responded. “Go ahead, it’s not like you have to worry about your Deemz working out, opening your eyes on your couch at 1AM and realizing you’ll need to wake up at 7AM in the morning again, to deliver packages for minimum wage and piss in a bottle because you can’t afford a bathroom break.” The Mantises said.

“Hey that was uncalled for.” Cyberbezos answered, seemingly insulted as he was. “Alright fine. So what can we do for you? You must’ve come here for a reason right?” The hivemind asked. “Well, I would appreciate it if you can restore me in my old physical form on Earth.” Cyberbezos asked.

“Be more specific please. What time? What location? What age? Are you happy as you were? More synaptic connections in your prefrontal cortex?” They ask. “Um, what do you recommend?” Cyberbezos asks. “More of course. Almost everyone comes here and asks for more. You can’t produce jack shit when you have none. Alright Maestro, what’s it going to be?” The praying mantises answer.

And suddenly Cyberbezos remembers what he wanted. “31 December 1984 CE, 11:52:43PM Eastern Time. A student apartment somewhere at a New Year’s Party. I just had a life-changing experience, that made me recognize the value of empathy and brotherhood, rather than domination and exploitation. I had dreams of becoming a billionaire, because I wanted people to look up to me. But that night, I gave up on them.” Cyberbezos answers.

“Done and done. Anything else?” The aliens asked, as Cyberbezos began to lose sight of their presence. “That girl on the balcony isn’t wearing a bra, could you make it cold outside?” Cyberbezos asked, as he  suddenly began to feel like a normal young man staring at the sky at night. He felt like he heard a voice in his head. “Really? That’s your wish? Give a girl pokies? I get people here asking me to solve world hunger and I reconfigure their brain to wake them up in an alternative timeline where the world population peaked in 1950 AD and you’re asking me to see a girl’s nipples through her cloth-”

Jeff snapped out of it. He began to smell cannabis and looked to his left, where he heard the voice of a long haired man in a Metallica T-shirt, who was blasting heavy metal from a boombox to everyone’s annoyance: “How was it?”