I’m planning on starting a short series of articles that look at our current predicament and offer potential rarely discussed solutions that would greatly reduce the damage caused by climate change if implemented. Today I want to look at a particular solution that’s deeply controversial, but nonetheless highly important. This solution is the legalization of abortion. To understand why legalized abortion is so important, we first need to look at another issue, the relationship between climate change and overpopulation.

Global warming is primarily the result of carbon dioxide emissions. Carbon dioxide emissions in turn, are caused by our consumption of fossil fuels. The reason we started using fossil fuels in the first place, was due to overpopulation. For most of human history, wood and peat were the primary sources of fuel. Occasionally surface deposits of coal were utilized, but this was generally a rare phenomenon.

This changed in the United Kingdom, in the 16th century. Coal had been used occasionally by medieval people on the British isles, but this caused significant air pollution and such use was generally discouraged.  In 1306 King Edward banned coal burning in England for example, because it covered the cities in dirty smoke. By the 16th century however, Britain was beginning to run out of woodland and the people were faced with a choice: Find an alternative to wood, or die from a lack of energy. And so the exploitation of the coal mines began.

This was a consequence of overpopulation. By the time of the 16h century there were more people who needed wood than there were forests that could supply wood. Whereas every tree that’s chopped down and burned is a tree that originally absorbed carbon dioxide from the atmosphere as it grew, a coal deposit is a form of carbon removed from the atmosphere millions of years ago. When overpopulation forced people to utilize coal as a fuel in addition to wood, they were transitioning to the use of non-renewable resources.

Today we see an attempt to return to the use of biofuel as a source of energy. Solar panels and wind turbines are supposed to deliver the bulk of our energy needs, with gaps in supply delivered by crops and trees we harvest. Today, far more people live in Europe than before we started using fossil fuels. All those people also consume far more energy than they did back before we started using fossil fuels. In other words, planning to rely on biofuels will cause a big problem, as long as our world is filled with so many people.

Plans to use biofuels are necessary, because we’ll run out of fossil fuels eventually. The problem is that most fertile land we could use to grow the required crops is currently covered by forests or used to feed human beings. In a world with fewer people, land used to feed people could be used to produce biofuels. In a world with a growing population, forested land will need to be cleared, to grow the crops we’ll need to deliver us energy.

The general rule we encounter tends to be that a world with more people requires us to scrape the bottom of the barrel in regards to our use of resources. Canada for example extracts crude bitumin from the ground to produce oil, but this releases around 12% more carbon into the atmosphere than a barrel of conventional oil does, at far higher production costs. In a similar manner, some of our most carbon-intensive industries depend on a growing population. A shrinking population doesn’t need new office towers and houses to be built every year, but a growing population does. A shrinking population similarly dramatically reduces the need to extract new metal ores from the Earth, as existence metal can be reused.

Most importantly, removing carbon from the atmosphere will require reforesting large parts of the world. To reforest large parts of the world requires us to feed ourselves through far less use of land, or to feed far fewer people. Expectations are the current population explosion in Africa will require a dramatic increase in farmland, at the cost of tropical forests and the animals that inhabit them. Those trees that currently sequester carbon would release all of their carbon into the atmosphere, with dramatic consequences for our earth. 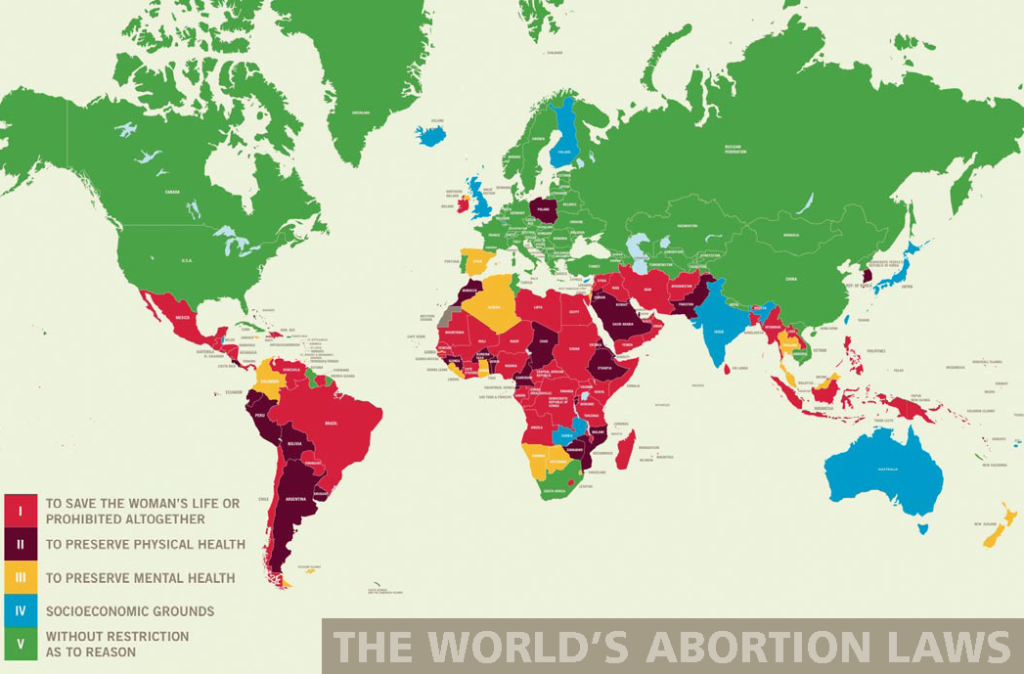 With a few exceptions, countries with legalized abortion have much lower population growth rates than countries where abortion is still illegal. One exception that sticks out is Poland: Abortion is illegal, but population growth is below zero. There are a few reasons for this. In Poland, abortion was legal and broadly available, until the end of communism. By then, fertility had already declined dramatically and small families had become the norm.

In addition, Polish women have access to abortion, despite strict laws against abortion. An estimated 80,000 women in Poland travel abroad every year to have an abortion. For Polish women, this is a relatively easy option. For most women in South America and Africa, such an option is unaffordable.

Demographers have long been aware of the difficulty of reducing population growth, without giving women access to legal abortion. Stephen Douglas Mumford noted back in 1986:

A common objection to the need for abortion in third world countries is that Western nations have much higher carbon footprints than non-Western nations and that the focus should lie on reducing the population of Western nations or addressing the footprint of such nations. There are a few issues with this argument.

To start with, Western nations have a large role in the crisis, but looking at carbon emissions from fossil fuels alone misses the bigger picture. As an example, soot from open fires causes about as much warming of the Earth worldwide as half of all carbon emissions, but the vast majority of soot comes from third world nations. In addition, although carbon emissions today are lower in non-Western nations, these emissions will grow far more as these nations begin to develop.

Finally, addressing population growth in non-Western nations is a way of addressing climate change that is both cheap and benevolent in its side-effects. Millions of women in non-Western nations don’t have access to contraception or legal abortion. They are desperate to reduce their fertility, but have no effective manner to accomplish this. The children who are born to such women are often given away for adoption and end up in situations where they are prone to child abuse. Parents who can’t afford to give proper care to their children often choose to give their daughters up for marriage at a young age. This then leads to high fertility rates and perpetuates the cycle of poverty, overpopulation and misery.

Legalized abortion can thus deliver a significant improvement in quality of life, at a very low cost. Such a thing is very hard to achieve in Western nations today. In fact, I would be willing to argue that the money currently spent on transitioning to renewable energy use could be spent more cost-effectively by encouraging abortion and use of birth control in third world nations.

A recent estimate suggests that spending 1.11 dollar on family planning in third world nations reduces carbon emissions by one ton. In contrast, to reduce CO2 emissions through solar panels in Germany requires hundreds of euros per ton of carbon avoided, or tens of euros per ton for wind turbines. The lowest hanging fruit right now, is to help out those women who are giving birth to new human beings against their will. This makes perfect sense when we think things through. A lifetime of carbon emissions can be avoided through a procedure that takes no more than a few minutes for a skilled nurse to perform.

The benefit for Western nations

Consider the current demographic projections, displayed in the above chart. Whereas in 1975 Europe had one citizen for every African, by 2100 there will be more than eight Africans for every European. My question would be: How do people expect our current refugee policy to be sustained in the long-term? For the costs Norway makes to house one refugee in Norway, the country can take care of fourteen refugees in refugee camps around Syria.

Most refugees never make it into Europe. The most vulnerable ones are left behind, whereas African refugees who make it to Europe tend to be young men from a middle-class background, whose family invests in them in an effort to get them into Europe. Note for example, that most Syrian asylum seekers are young men. What happens to the young Syrian girls? Men from the Arab gulf states fly into refugee camps to buy those girls as sex slaves.

Ask yourself: What’s the most cost-effective manner of reducing the suffering of refugees? The only solution that’s cost-effective for the currently unfolding humanitarian catastrophe is to focus on taking care of refugees in the countries where they originate from. In addition, the streams of refugees should be prevented before they start, by addressing the rampant population growth rate that leads to conflict in the first place.

Why aren’t we doing this?

The primary issue we’re dealing with when it comes to abortion, is opposition from religious groups, primarily the Catholic church. The Catholic church has issued dogmas declaring abortion to be a mortal sin. The problem is that in the 19th century, the Catholic church adopted a policy of papal infallability. As Mumford explained so eloquently, the church now feels unable to contradict any of the statements it previously made, because the credibility and survival of the institute are effectively dependent on this idea of papal infallibility. They have maneuvered themselves into an awkward position from which no graceful escape is possible. Either they admit they have been wrong on fundamental doctrines of faith for decades, or they play a fundamental aggravating role in our descent into a climatic and humanitarian catastrophe. So far, they seem to settle on the latter option.