What I would generally recommend people to do is to accept that everyone you know is going to die, the world as a whole is going to be destroyed and you’re absolutely powerless to stop it. That’s the most liberating realization you can have, because it removes false responsibilities from your mind that you didn’t have in the first place.

Honestly, don’t even bother somehow trying to survive against all of the odds. It’s random. You think the odds are really favoring you in your homestead down in rural Alaska, then a forest fire breaks out and you’re trapped. The wind blows the nuclear fallout in the wrong direction and your permaculture garden starts giving birth to all sorts of terrifying abominations. The wind blows in the right direction and the local strongman shows up with his goons and you still die of hunger.

You’re not special either, humanity doesn’t need your descendants to rebuild society. If the only people who survive have an IQ of seventy, then it will take a few generations as hunter-gatherers in a seasonal climate for their IQ to return to the norm of 100. All the indicators we have suggest that our high level of intelligence that we have as human beings evolved surprisingly rapidly. It’s the basic stuff we don’t think about, like bipedalism, recognizing faces and hands that can grasp objects, that takes a long time to evolve.

If things get really nasty then humanity will die out. That probably won’t happen this century, but it’s perfectly possible that the last surviving breeding pairs of Homo Sapiens Sapiens in rural New Zealand die of hunger in the year 2300 of a particularly nasty drought. If that’s the case, then so be it. Because of their faster reproduction cycle rats are a lot more versatile than we are, if we don’t make it then it takes a couple tens of millions of years more to recover the lost biodiversity. 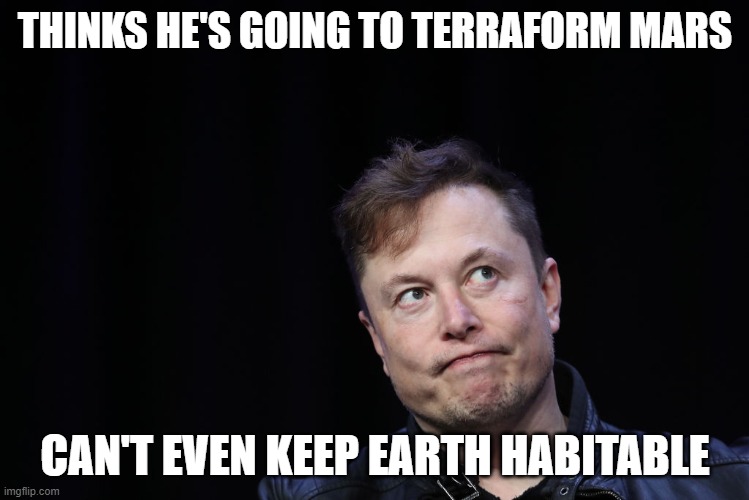 We’ve kind of bumped into the limit of what’s possible here anyway. All of the Earth has been populated and divided between people. The final frontier is space, but it sucks. You could perhaps build colonies on Mars, but you can’t terraform Mars. Whatever resources you’re going to spend on building colonies on Mars would have been far more efficiently spent on keeping our own planet somewhat habitable.

You could theoretically build a spaceship that moves to another solar system, but it’s going to take you a long time to get there. Even if you could genuinely travel at light speed, you’ll take forever to accelerate to light speed without turning your organs into a bloody pulp. Whatever thing would move to Alpha Centauri would probably be artificial intelligence, or so radically different from what you imagine a human being to be that we might as well be dead.

NASA is arguably a ponzi scheme that makes the average cryptocurrency look like a sane investment. They show you stuff that’s really impressive and then they allow you to extrapolate for yourself. I’m fine with funding NASA if people are willing to pay for pretty pictures of space that a decent artist could craft on his own computer during a sober weekend, but if people are paying money for space exploration under the impression that this is somehow going to deliver us a substantial way out of our predicament then we’re dealing with a scam.

The really liberating realization is that this is as good as it’s going to get and it’s all downhill from this point onwards. You’re going to get uglier, less healthy, you’re going to see your standard of living decline and it’s going to get increasingly more obvious that the world won’t get better. This liberates you, because it sets you free to do what it is that you really want to be doing. It also means that you can completely tune out of whatever it is everyone else is currently concerned about.

If this is a difficult realization for you to accept then I would recommend a high dose of psychedelics. The best option is probably a high dose of mushrooms in a beautiful part of the forest, some place where you won’t be bothered by middle-aged people who somehow fail to keep their dog on a leash. If for whatever reason you do have a dog show up in front of you, give it a bit of your mushrooms, that’s the only way these people will learn to keep their dog on a leash and you’ll do the dog a favor.

Ego death on mushrooms is one hell of an experience, but it’s a pretty good medicine for extropian and transhumanist delusions. Have a good dose of mushrooms and you won’t feel this petty obsession to live forever, you won’t be insisting that we’re going to terraform Mars even as the insects drop dead outside of your house while you sit in your air conditioned living room and you won’t be dumb enough to believe that science is going to solve all of our problems.

It’s over, we’re done, CO2 emissions were higher in December 2020 than in December 2019 even as the global economy implodes around us and air traffic has come to a standstill, we have no idea why methane emissions are suddenly surging either, you’re going to die, the coral reefs will be gone, the Amazon rainforest will disappear, the last wild gorilla in Congo will be turned into a stew, the last orangutan will end up as palm oil mixed into the peanut butter that you bought in your local supermarket, get used to it.

What’s happening now is the logical outcome of things that were happening long before I was born. You’re sitting in an airplane that’s rapidly losing altitude and you’re throwing the pencil in your pocket out of the window because your pilot asked everyone half an hour ago to dump all their luggage out of the window but you’re forgetting that ten minutes ago the engine fell off the plane. Don’t bother.

Don’t be melodramatic either. Don’t start crying, that just ruins the mood. You don’t have to kiss your husband goodbye yet either. Focus on doing the things you never got around to doing before you stepped into the airplane, see if you can give him a prostate massage before the plane hits the ground.

Accept that we have ten or perhaps twenty good years left, if that. Don’t guilt trip people for doing whatever the hell they want to be doing during those years. You want to spew a ton of carbon into the air to go backpacking in New Zealand? Well forty years ago that would have been a dick move. At this point it doesn’t matter. If someone is too stupid to understand what’s going on, which plenty of people are, don’t ruin it for them. Allow the fools to enjoy their ignorant bliss.

The happy fools are not capable of solving this problem, this problem should have been solved back in 1989 during the conference in Noordwijk, when we already knew about this problem for decades but the Americans refused to take action. Remember, 350 parts per million is not just a petty attempt at virtue signaling, it’s an upper limit on what concentration of carbon dioxide you can maintain in our atmosphere without radically destabilizing the climate. When I say this problem should have been solved decades ago, I’m not being dramatic, I’m pointing out what’s already obvious to climatologists.

Frankly, even today nobody cares. Americans are apparently willing to pay between $79 and $89 per year in support of reducing domestic greenhouse-gas (GHG) emissions 17% by 2020. If that’s the case, then you might as well not be willing to do anything. Remember, this is not like fixing the ozone layer, that requires you to ban a handful of obscure industrial gasses.

This is the sort of problem that required us to completely transform our economy for us to solve it. The ozone layer problem was the equivalent of a training course for what we were supposed to start doing. We would have had to stabilize our global population, we would have had to decarbonize our electrical grid and we would have had to move towards a society that does not pursue perpetual economic growth. Well, we didn’t do that.

Now we see the problem unfolding before our eyes and so we start backpedaling: “Yes we didn’t start working on the assignment until 3 AM the day before, but surely you can still give us a passing grade? How about we start blocking the sun with sulphur aerosols? Surely we can all just start eating lab grown meat soon and reforest the globe?”

The reality is that this is not how you solve a problem like this. It required a change in cultural values that didn’t take place. The entheogens of the indigenous Americans had a message to offer us that could have healed the world. Keep in mind that the Aztecs had access to these entheogens and they built up an infrastructure of massive human sacrifice, believing that this would stave off the end of the world. They knew certain things we’re only just starting to figure out now.

We were supposed to instigate a complete global turnaround of our value orientation back in the 1960’s. We were supposed to introduce the mushrooms and the mescaline cactuses to the furthest corners of the globe. Remember, it’s not just the middle-aged white fossil fuel CEO who needs a good dose of mushrooms, it’s the guy in rural Kenya turning a fourteen year old girl into his second wife or the Somali grandmother who insists that it’s time for her granddaughter to be circumcised too. Middle-aged white men don’t have copyright claims on the dominator culture. Unfortunately, what happened instead is that our democratically elected governments began a global war against “drugs”. At this point the entheogens can no longer help us heal this world. They can only provide us compassion and comfort as we face the inevitable.

We never even got around to trying out the challenge we were given. If we were somehow close to figuring it out I would say become vegan, stop flying, sterilize your pets, turn off your central heating and drive a truck into a Bitcoin mining farm. But we’re not close. We didn’t even start the journey. Put it out of your head and enjoy the few good years we have left.