You can look at just about any Western country right now with high vaccination rates and you will find record numbers of infections. Israel had the highest rate of infections per capita in the whole world. You can’t explain this through increased testing. During the peak in January 2021 they had about 110,000 tests performed, with around 8,000 positive on a given day and around 7.5% of people would test positive. Right now they’re performing 400,000 tests every day, 60,000 people test positive, which is a 15% positivity rate.
It’s the same in the Netherlands, we’re seeing 47% of people test positive out of 135,000 tests, with a 7 day average of 64,000 people testing positive daily. In January last year, when the vaccine program started, we had around 5000 people testing positive, with a positivity rate of around 11%. More people are getting this virus right now, it’s not just a matter of more testing. Sewage RNA in the Netherlands shows this simple fact too: 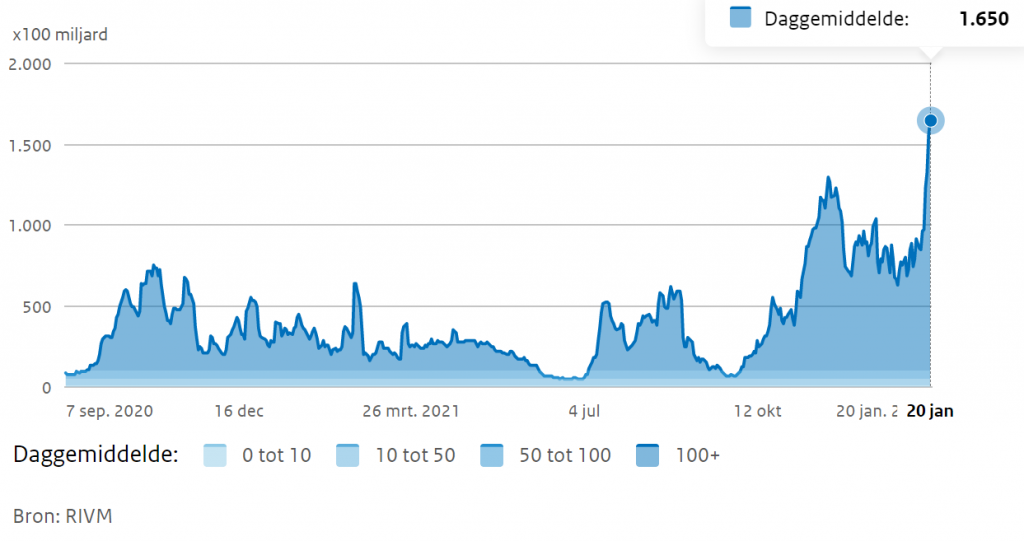 What happened is that everyone had a highly similar immune response after receiving these vaccines. New variants then emerged that make effective use of that similar immune response. Delta made an attempt at this through AY.4.2, but then along came Omicron, which was a much better candidate with a massive head start.
This is how we ended up with BA.1 and BA.2. These viruses won’t send you to the ICU anymore, because everyone in the Western world has had some exposure to SARS-COV-2 by now, so the traditional immune overreaction no longer happens.
Rather, what you get now is that this is turning into a chronic virus, something more akin to herpes or hepatitis C. It mutated to allow it to suppress Interferon, meaning it continues to hide in your cells without alerting the innate immune system. this is probably part of the reason it has now largely shifted to small children, as children’s much stronger innate immune system is what has so far kept them safe. It can still kill people, but it now just takes much longer to kill people. Look up the death toll in South Africa, to see what I mean. Deaths from infections are delayed by a month compared to Delta, Omicron first needs time to exhaust your immune system.
With the vaccines, you’re left with an immune response that doesn’t work properly. It targets an old version of the virus and the virus evolved to use the immune response to its advantage. That’s why you’re seeing the record infections everywhere and that’s why you’re hearing all these reports of rapid reinfections.
This slowly kills people by exhausting the immune system. B cells keep churning out non-neutralizing antibodies that can’t stop the virus, T cells become exhausted and the body becomes vulnerable to secondary infections. Unlike previous variants it doesn’t behave like a regular respiratory infection, it’s not like a severe case of the flu.
It’s not normal to have 45% of the tested population test positive for this virus. Influenza doesn’t infect that large of a section of the population in a given season. The vaccines turned people into sitting ducks for this virus, the statistics are being manipulated to obscure this. Infections in the first 14 days after the first injection are counted as happening in “unvaccinated” people.
You can compare South Africa to Denmark or Israel, to see what’s going on. Highly vaccinated populations lead to a situation where growing numbers of people are chronically infected with Omicron. These chronically infected people keep constantly exposing other people too. Through antibody dependent enhancement the virus can infect your macrophages and start replicating inside of them, contributing to the exhaustion of the immune system.
You may have heard that Omicron is milder than Delta. It’s mostly slower than Delta. Here’s the death toll reported in South Africa: 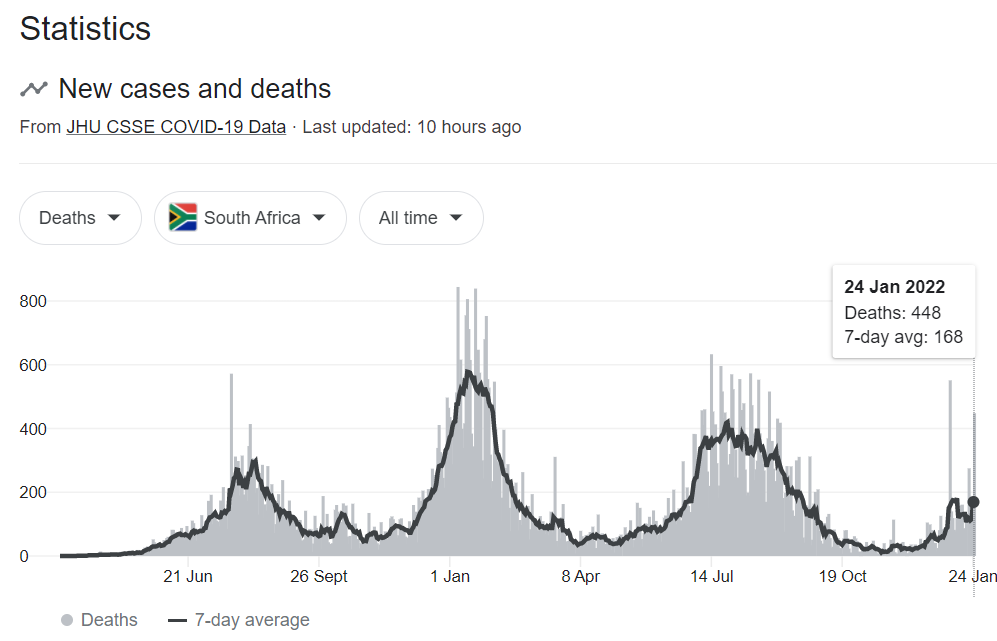 And here are the cases: 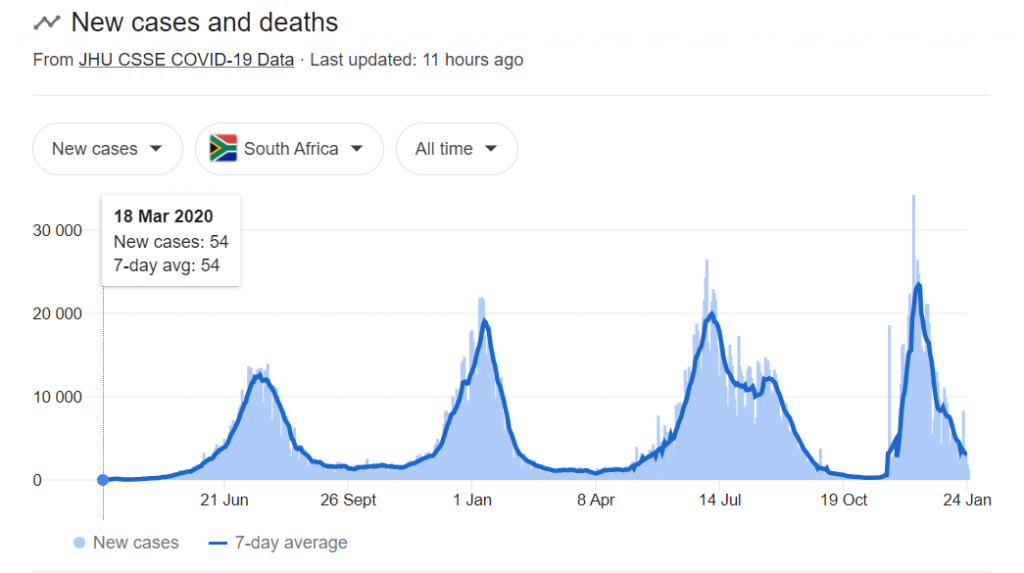 For Delta, cases and deaths go up together. For Omicron, there’s a strange big delay of about a month. This is because Omicron behaves differently.
I can’t emphasize this part enough: What matters when you’re dealing with a rapidly mutating coronavirus that can repeatedly infect people is the quality of the immune response. The quality of the immune response induced by the vaccines is low, but the quantity is high. We already knew this in may, when a study announced:

In this study we profiled vaccine-induced polyclonal antibodies as well as plasmablast derived mAbs from individuals who received SARS-CoV-2 spike mRNA vaccine. Polyclonal antibody responses in vaccinees were robust and comparable to or exceeded those seen after natural infection. However, the ratio of binding to neutralizing antibodies after vaccination was greater than that after natural infection and, at the monoclonal level, we found that the majority of vaccine-induced antibodies did not have neutralizing activity.

And if you think these vaccines worked poorly against Delta, wait until you see how they’re going to perform against Omicron BA.2. You can forget about deaths and hospitalizations for a moment. Rather I want to ask you: What do you think is going to happen when you’re chronically infected with a corona virus? Here you can see the case rate by vaccination status in the UK: 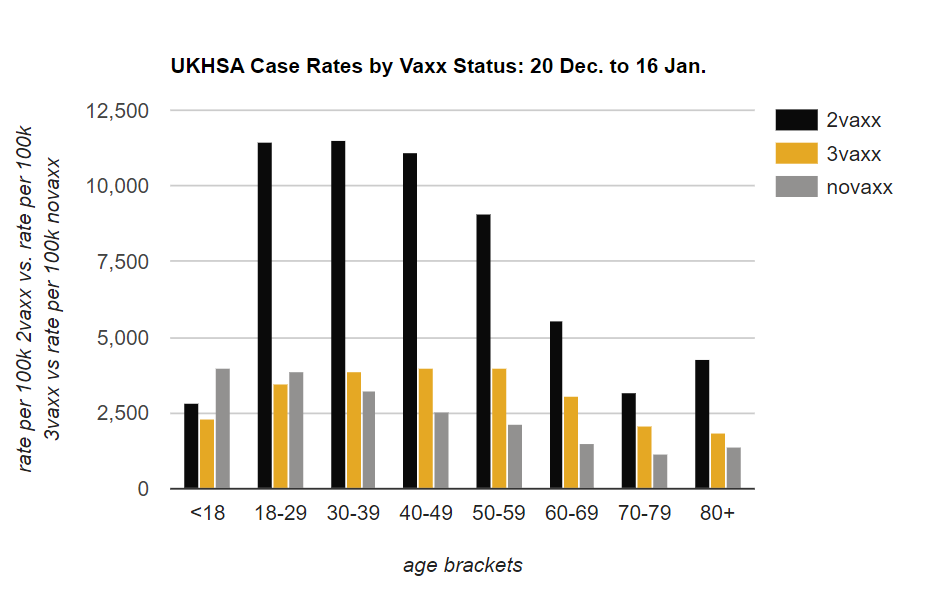 These numbers are distorted, but now I’m going to show you numbers that should terrify you, if you understand what you’re looking at.
Here you can see positive tests in the Netherlands from the GGD, our health agency that arranges the COVID tests: 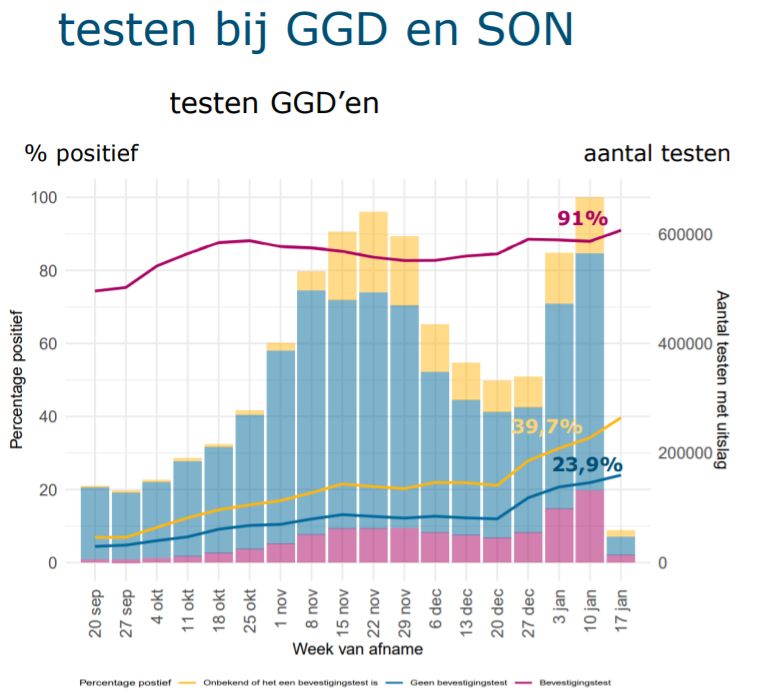 For people looking to confirm their own positive at home test, you’re looking at 91% testing positive. For people whose test is not to confirm a positive at home test, 23.9% are testing positive. The 39.7% refers to the positive rate in those people where it’s not clear whether they’re looking to confirm a test they did themselves at home. Put all these numbers together and you arrive at the ~45% testing positive that I mentioned earlier.
Because “anti-vaxxer conspiracy theorists” like me are not allowed to go to the gym or the restaurant without having a swab stuck up our nose, the Netherlands also has access to statistics for people who are unvaccinated and looking to receive a temporary QR code to be given entrance to an event. And here you can see the positivity rate, for the “anti-vaxxer conspiracy theorists”: 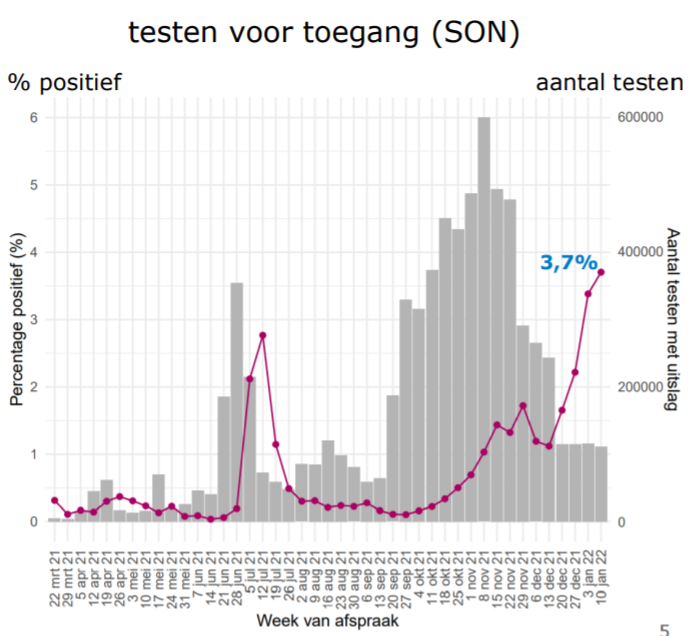 Here you can see that just 3.7% are testing positive! But if you had any doubt left, this should be the final nail in the coffin: 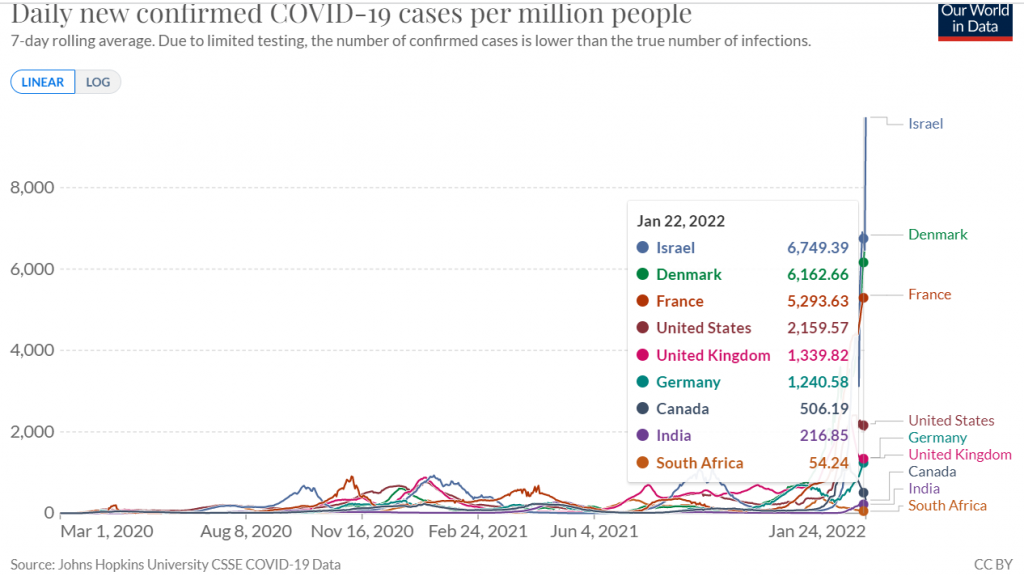 How do you wish to explain South Africa? Are they missing 99% of their cases, due to inadequate testing? When you vaccinate people, you make them more susceptible to infection with the Omicron variant. In highly vaccinated populations like Israel and Denmark, you start to see positive feedback loop effects, as all the vaccinated people who get infected also have the ability to spread the virus.
Is it seasonal? 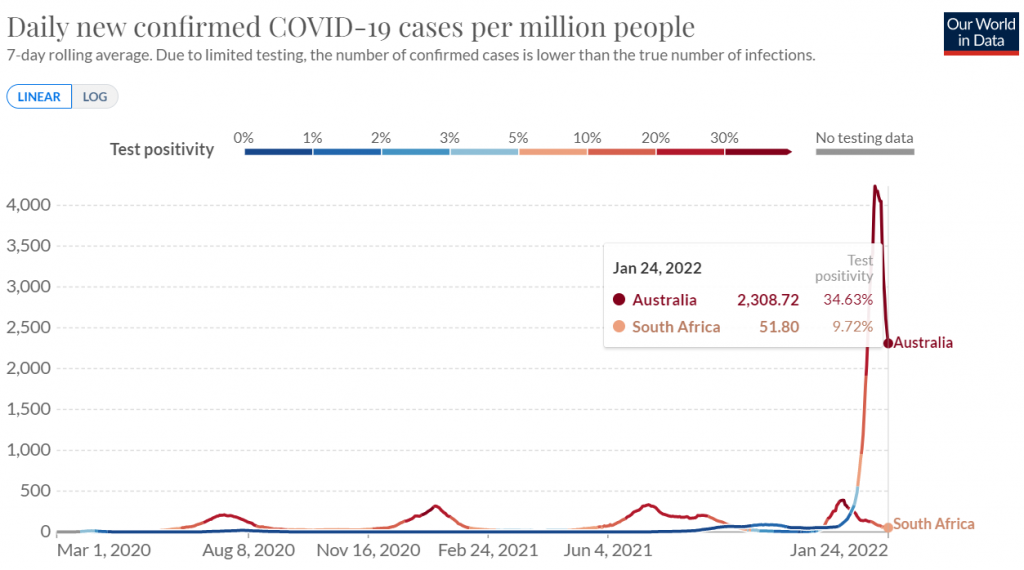 We can lay that idea to rest too.
But it can’t be that bad right? The Dutch numbers I showed you here suggest 12 times as many cases per capita in the vaccinated population. That would be major news if it were really this bad, don’t you think?
Well let’s see what has happened so far. In Germany, they initially reported that just 4.42% of Omicron cases were in the unvaccinated. Then a few days later they backpedaled, said the original number was an error and suddenly announced a much higher number for unvaccinated Omicron cases. In Australia, we’re seeing similar rates, with the vaccinated catching Omicron at tenfold higher rates.
In highly vaccinated nations, the virus doesn’t have to pass through unvaccinated hosts, to get from one vaccinated person to the next. Unvaccinated people will exert different immune pressure than vaccinated people, so with unvaccinated people out of the equation, the virus can evolve to optimize infection of vaccinated people, developing traits that would put it at a disadvantage in the bodies of unvaccinated people.
We’re now reaching the point where infection with SARS-COV-2 is chronic. We’re now getting reports of people who get infected with BA.1, recover and subsequently get infected with BA.2, just a month later. If you’re continually having to fight off this virus, it will exhaust your immune system. And with everyone around you now vaccinated too and thus constantly shedding the virus, the vaccination campaign hasn’t just rendered your own body more susceptible to infection, it has increased your own exposure to virus particles from the environment.
Look at everything that has happened and tell me: What other explanation could there be for what’s going on now, other than the Omicron strain using your vaccine induced immune response to its own advantage?
-How else are you going to explain its sudden rise around Europe, completely replacing Delta at an unprecedented speed?
-How else are you going to explain the massive increase in virus in sewage and the massive increase in overall cases?
-How else do you explain the higher case rates in the UK for the vaccinated?
-How else do you explain the highest case rate in the whole world in triple vaccinated Israel, where ICU’s are now rapidly filling up again?
-How else do you explain this variant being more infectious than anything seen so far?
-How could it have such a big advantage over Delta that it rapidly drives Delta into extinction, if not through evasion of adaptive immunity?
-How else do you explain this variant being in retreat again in South Africa, but continuing to cause record infections in highly vaccinated populations?
-How else do you explain the rapid acquisition of new mutations, that eliminate the last antibodies from vaccinated serum that still worked?
-How else do you explain the higher percentage of positive tests than we’ve ever seen so far?
-How else do you explain the overwhelming clustering of mutations in the receptor binding domain of the Spike protein?
This is exactly what it looks like: A virus that has now evolved to use your immune response to its own advantage. It generally won’t directly kill you. Rather, every time it infects you it ages and exhausts your immune system. You witness a depletion in naive T cells. Every time it infects you, your body responds with a derivative of the inadequate immune response it learned from being overwhelmed with the Wuhan version of the Spike protein.
Israel is now expanding their fourth shot to everyone above 18. The fourth shot however is going to do exactly what the third shot did. The breadth of the immune response declines further, as the immune system once again learns to zoom in on the Wuhan spike protein. This means that it protects people for a few weeks, but then once the honeymoon period is over, they’re rendered even more vulnerable to this virus.
The evidence is out there for all to see. There is no way to cover this up anymore.