There’s something important to discuss about the plan to give everyone boosters with the 2019 Wuhan spike protein. Imagine you had a generic virus, with twenty different types of antibodies that neutralize it. One day, a new version of the virus emerges spontaneously, that can escape one of these antibodies. Is this mutation going to spread? It’s hard to say, but the selective pressure on this escape mutation would be mild. It doesn’t matter much if you have one position where you evade an antibody, if you’re exposed to twenty different kinds of antibodies.

Now imagine a situation, where a virus is faced with just four different kinds of antibodies, binding to four different positions on one of its proteins. Humans used to have far more antibodies that work, but the virus jumped into mice and then jumped back into humans, so it now looks very different and out of the original twenty different antibodies, we’re now just left with four.

In a handful of people however, the body is still bad at producing antibodies after giving them these vaccines. What would the selective pressure be for this virus to evade one of these last four antibodies? We would expect the selective pressure to be much stronger now than it was back when the virus faced twenty different kinds of antibodies. Assuming all the antibodies have equal neutralizing potential, one mutation could slash the neutralizing potential by 25%. Whatever harm such a mutation causes to its ability to spread in unvaccinated people who have never been exposed to this virus now becomes massively outweighed by the benefit it delivers in vaccinated people.

And that’s what has me very concerned about the boosters being deployed now. I’m sure it sort of works for a couple of weeks in a handful of people to recall the same immune response once again. However, with this virus now being so far along in completely evading our immune response, selective pressure to evade what remains of our immune response is inevitably very high, much higher than it was for Delta.

So to illustrate what I mean, take a look at the numbers in Denmark.

Here are the numbers I showed you a few days ago:

Here you see 13.8% of people who get Omicron are not vaccinated. There’s a relatively straightforward explanation you could come up with for the relative lack of unvaccinated people getting infected: Unvaccinated people don’t really get to travel, so this outbreak begins with bourgeois urban young people who bring it back home from South Africa.

But if you wish to go with that explanation, you would expect that after a few days it begins to disseminate into the general population and those terrible anti-vaxxers begin to get what’s coming to them. And yet here are the numbers released today:

As you can see, the dates overlap. They’re looking at a different age category now though, so let’s grab this table from a few days later: 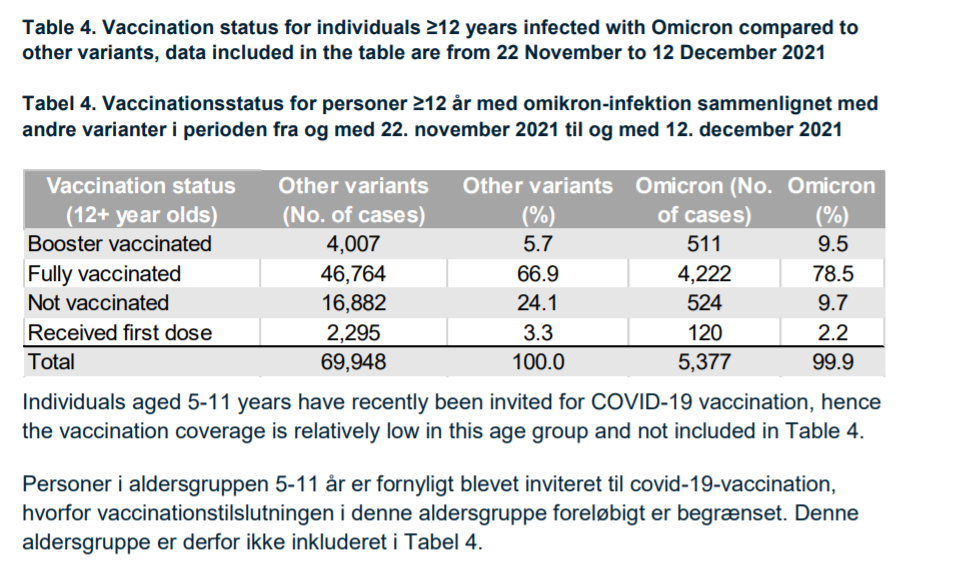 Now we can calculate what happened in the past thee days:

151 cases in once injected people.

Percentage wise, that looks as following:

I believe the correct scientific term for this phenomenon you’re seeing here is called “run for the hills”.

So what has actually happened is that in recent days, this new variant of COVID moved away from unvaccinated people towards vaccinated and boosted people. It’s not a strong enough trend to argue “it has evolved mutations that adapt it to vaccinated people”. However, it does demonstrate that we’re not just dealing with overrepresentation of vaccinated people by virtue of the fact that it was seeded by air travelers.

The astute reader will notice that we’ve seen the same phenomenon happen for the “other variants” category, I don’t really have a proper explanation for that. It could be that some Omicron variants aren’t recognized as such. It could also be that for whatever reason they’re now testing very different demographics.

So now it’s time to discuss what this means. Let’s start with what we know. We don’t really know how this thing came into existence. It could have been an HIV patient, but right now the more likely explanation is that it emerged in mice. That’s what Geert van den Bossche has been warning about for a while now, that it could jump into another animal, change to fit that animal and then jump back into humans.

If this is what happened, that means it had to evolve to bind to a mouse ACE2 receptor, which looks different from a human ACE2 receptor. In that case, the evasion of most human antibodies is primarily a side-effect of the fact that it had to change its Spike protein to fit a different looking ACE2 receptor.

If this is what happened, it’s a far worse scenario than the originally proposed scenario, of an infection in an HIV patient. The reason is because it means some of the changes it inherited from its time in mice that it still has right now are probably detrimental to its adaptation to humans. That may explain why it looks milder. That also means it’s probably going to lose those changes and become more severe in the coming weeks, as it continues to evolve.

In the scenario of the HIV patient, it simply gradually changed in response to an antibody response that wasn’t strong enough to eradicate it. That’s a more pleasant scenario, because it would mean the version of Omicron we’re seeing now wouldn’t have mutations that enhance replication in mice at the cost of replication in humans.

And that gets us to the really dark scenario. As I’ve said before, you can’t look at South Africa and assume that you know what’s going to happen because we saw it happen in South Africa. South Africa is in summer right now, with a young population that is mostly unvaccinated and lived through massive waves of older variants and developed immunity in the process. In the Western world, the situation looks very different. It’s wishful thinking to assume the same thing will happen here as in South Africa.

Rather, what looks likely to me is that you’re now witnessing the ancestor of a new virus that is now going to learn through random mutation how to adapt to a unique new niche: The triple Wuhan spike vaccinated elderly Westerner. Your hospitalization or death is merely a side-effect of the need for this virus to learn how to survive and spread in the presence of your immune response against it.

All the vaccinations being given now merely make this worse, by increasing the size of the niche. Vaccinating the unvaccinated converts more people into deploying an antibody response that this virus is learning to use to its own advantage. Boostering the vaccinated means forcing the antibody response to increasingly resemble the ecological niche this virus is learning to thrive in. You will increase the amount of binding antibodies that don’t neutralize the virus but allow it to enter and replicate inside your own white blood cells.

In the current situation, where just a handful of spike directed antibodies in vaccinated people allow them to neutralize the virus and where 92.3% of infections take place in people who were vaccinated, Denmark is experiencing a situation in which there is huge evolutionary pressure on this virus, to develop mutations that allow it to evade our antibody response. Mutations that would have been selected against in the past because they make replication more difficult in unvaccinated people, are now free to spread.

Normie conservatives are telling you “COVID is now over”. However, you might have noticed that the Dutch government -which just declared a new lockdown- and most of the world’s epidemiologists and evolutionary biologists are not really nodding in agreement. It’s possible they made a terrible miscalculation of the kind that costs you the next election. It’s also possible that the normie conservatives got it wrong. What do you consider more likely?

The difference between normie conservatives and the governments that are panicking about this new variant, is that normie conservatives look towards the past: What happened in South Africa? The governments are attempting to look into the future: How is this virus now going to change and what will the impact be? The conclusion they’re drawing in Ireland and the Netherlands, is that it’s about to get much worse.

What this looks like to me, is that we’re witnessing the birth of a new SARS-COV-2 variant, that gradually learns how to survive in the bodies of people who took these vaccines. For elderly people that’s acutely dangerous, for younger healthier vaccinated people, it leads to a situation in which this virus evolves into something more resembling a chronic condition: You’re continually infected and reinfected, never quite able to overcome the virus, with your overall immune system suffering as a consequence.

If that sounds like a disaster to you, you’re right. The real disaster however, happened in the past: The mass vaccination campaign was the real disaster, what we’re witnessing now is just the logical consequence of the mass vaccination campaign. The virus overcame a hurdle that the experts expected would be impossible for it to overcome. Here you can see a study that said it would need twenty mutations to make a significant dent in our immune response, which practically everyone assumed would be too big of a hurdle. Well, life finds a way. Take it away Dr. Malcolm: