Social class is never really going to go away. Rather, when you have a meritocracy, what happens is that social class just becomes genetically reinforced. The poor end up being composed of people who lack the traits required to stop being poor. You end up lacking conscientiousness, intelligence, mental stability or other traits required to be a good white collar office worker.

What does it mean to grow up as part of the white underclass? That’s the sort of thing that’s hard to express in words. It’s just something you feel, something you always carry with you. Other people will make sure of that. Protip to other white trash boys on the spectrum: When girls ask you what your parents do for a living, just lie. Bonus points if you then tell the truth within seconds of blowing your load. Gummo gets a lot closer than words can get to it. Gummo doesn’t really try to glorify it, it just depicts it as it is: A mixed bag.

There’s basically two reactions people have to Gummo. They either love it, or they angrily walk out. I expected I was going to love it and I did. I think one reason a lot of people hate it is because it becomes very hard after you’ve watched it to just paint white people with a broad brush as “privileged”. The whole thing is just a little too confrontational to watch if you’re someone who browses Twitter and genuinely lives under the impression that being white means playing life on easy mode. It shouldn’t come as a shock that the New York Times called it “the worst movie of the year”.

Just as there’s two reactions to watching Gummo, there tend to be two reactions among those who are born into the white underclass but happen to have the bad luck of having two brain cells to rub together. You can either spend your whole life trying to deny your roots and hope to blend in with the masses, or you can embrace it. That’s the choice that comes with being white trash that other ethnic groups don’t have. Accents can be unlearned, manners can be copied, beliefs can be changed, but your appearance is pretty fixed.

My brother decided to fight it, he now parrots high status beliefs and has a comfortable government job, whereas I decided to embrace it. I was born destined to be an outsider and as much as my mother might have hoped for me to become a doctor (I was named after a doctor on the TV apparently), I grew up seeing parents who did whatever the hell they felt like every day, because they had no jobs.

Through hard work I became a doctor, whereas my first cousin became addicted to amphetamine and spends his days institutionalized. Oh wait, only the latter half of that sentence is true. The idea of having obligations became intolerable to me. I figured out how cryptocurrency works and put the proceeds into cheap Asian stocks so that when I’m inevitably fired from my job I can spend the rest of my days in a drug induced haze.

When I was sent off to the gymnasium, my mother didn’t want to attend a demonstration class for adults, because she would feel embarassed being surrounded by far more knowledgeable high status people. I on the other hand, had to spend five days a week there with their sons and daughters. At family gatherings, people would say to my grandmother “there’s your little professor” when I walked into the room.

Growing up as white trash tends to mean that problems just go ignored or denied. The whole film is filled with references to sexual abuse and trauma. Everyone else around you responds to problems by denying them, so when you face problems yourself, you just learn to deny them too. White trash doesn’t go to a shrink.

But Gummo doesn’t just depict being white trash as endless pitiable misery. There’s intense liberty to be found in being white trash, when you stop fighting or denying it and choose to embrace it. It’s kind of rare for me to encounter artists who do that, the best example I’ve encountered is Zheani. Her sister is autistic, her dad died of an overdose and she apparently grew up in foster care for a while. 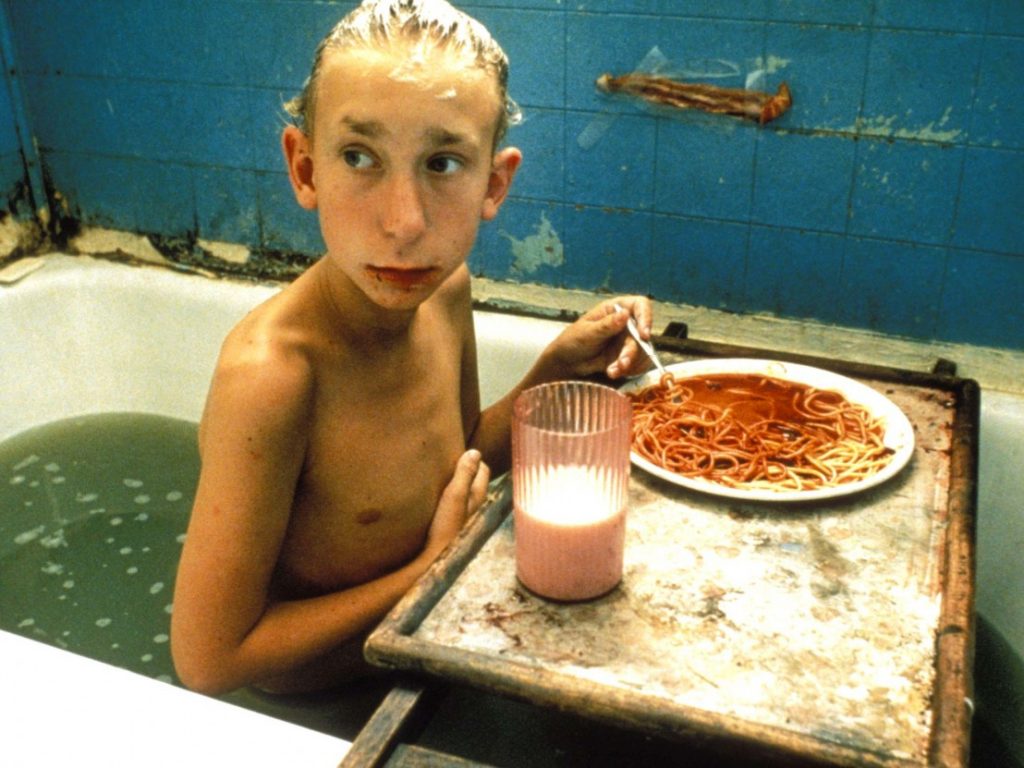 I think that’s the real meaning of the bathtub scene: There’s liberty in being self-aware white trash. Everyone who watches this movie remembers the bathtub scene, even though nothing really happens. A boy sits in a moldy bathtub eating spaghetti while his mother washes his hair, with pieces of bacon taped to the wall behind him. And that’s how true liberty is found. Most people have tightly regimented and scheduled lives. You have a dining room, a time when you eat and a time when you take a bath.

But if you’re white trash, there is no need for that. You can wake up when you feel like it, you can eat when you feel like it and you don’t have to bother teaching your children discipline or manners. You can do what you genuinely want and you learn to ignore the dirt and squalor over time. And when you reach that point of liberty, what could be nicer than sitting in a warm bathtub, eating spaghetti while your mom washes your hair?

It’s kind of hard reviewing a movie that doesn’t really have a plot. The whole thing is just a chaos of loosely connected scenes without any real storyline. The actors are real indigenous white trash from Nashville, Tennessee, they’re able to tell their own story, sometimes they go off to smoke crack between scenes. I’m happy this movie was done in the nineties, because the obesity crisis has now gotten so bad that the people would not look very charming if it were done today.

Anyway, I just wanted to say that I liked this movie and I recommend watching it after a bit of weed. 10/10 would happily forget having seen it just so I can watch it again.