I’ve noticed that people tend to be quite willing to speak honestly about the vaccines, when they haven’t realized the implications themselves yet. Consider this quote from a South African doctor in Gauteng: 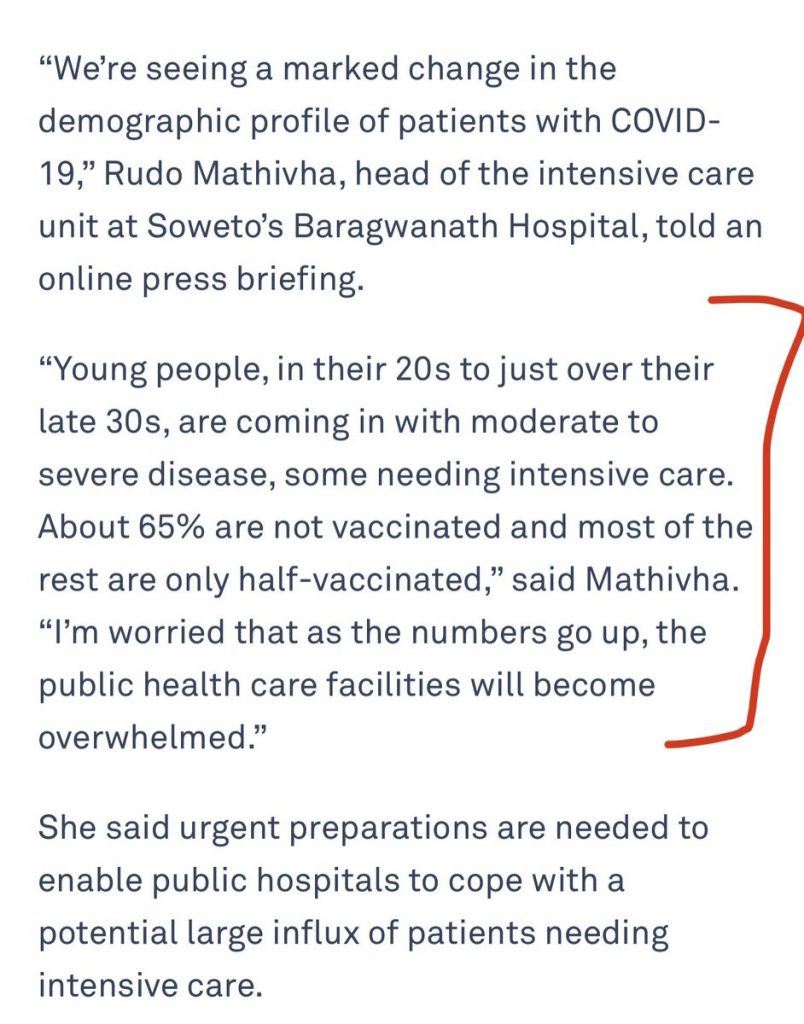 From mainstream media, to the vaccine developers, to those who reject the “new normal”, almost everyone is very eager right now to craft a narrative where this new variant is hyped up. Unfortunately that’s hard to reconcile with what the doctors in Gauteng are reporting. What they are reporting however, is also hard to reconcile with the idea of an effective vaccine.

If you see that 65% of patients are not vaccinated, you’ll assume “the vaccines are still working quite well against this new variant”. That is, until you remember that this is South Africa we’re speaking about, where most young adults are not vaccinated. Fortunately they keep proper statistics, which you can find here. Apparently the patients now are young adults, so I selected the 18-49 cohort and looked at the vaccination rate in Gauteng. Here’s the result: 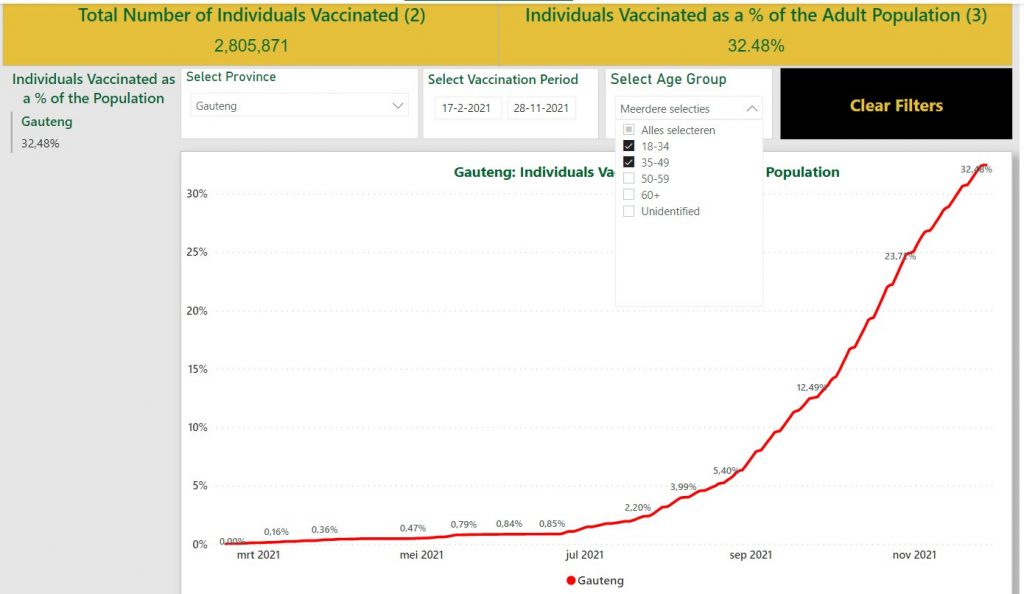 So, we have 65% who are unvaccinated, most of the rest are half vaccinated and some are fully vaccinated. The graph I’m showing you above includes everyone in this age category who received at least one vaccine:

A natural infection will encourage your body to recognize almost all proteins in the virus. The vaccine encourages your body to produce an immune response focused entirely on the spike protein, because it only makes your cells produce the spike protein. Why the vaccine developers went for this strange new approach whereas India and China are giving their people vaccines based on the whole virus is a mystery to me.

If you get exposed to the virus after receiving these Western vaccines, your body doesn’t learn to focus on the other proteins like the Nucleocapsid protein. Because the antibodies against the Spike protein immediately jump on the opportunity when this virus enters your body, you never really develop the opportunity to develop broad immunity again. With the boosters, you also cause a reduction in breadth in antibodies focused on the Spike protein, making it more difficult for your immune system to respond to variants that have undergone mutations in the Spike protein.

If that’s the issue we face with this new Omikron variant, you would expect the outcome to be that vaccinated people can’t really fight off this virus: Their body is stuck responding with an ineffective immune response against the Spike protein. What will be really interesting is to see what the rates of survival are going to be in South Africa for hospitalized patients who are vaccinated and for those who are not vaccinated.

To boil this down in simple English: When the vaccine induced immune response is not good enough to keep you from getting sick it actually generally ends up making you sicker, because it prevents your body from coming up with an immune response that does work.

If we see no evidence of vaccinated South Africans in hospitals dying at higher rates than unvaccinated hospitalized patients in the next few weeks, that doesn’t mean we’re in the clear yet: South Africa was pretty late with vaccinating its young adults. They have a far higher share of the population who went through a natural infection before being vaccinated than countries like Germany and Australia, that succeeded for a long time in keeping infections rare. It’s the people who were never exposed to this virus before receiving this vaccine who are most vulnerable to new variants.

In addition, South Africa doesn’t have something that is now unfortunately quite common in much of Europe: The phenomenon of the triple vaccinated elderly. As mentioned earlier, the third injection causes a decrease in breadth of the immune response against the Spike protein.

Israel is going to ban all foreigners from entering the country. That’s kind of hard to reconcile with the idea of this vaccine being our ticket back to normal, but it very much fits the warning from scientists like Geert van den Bossche, who warned us that these vaccines turn us into sitting ducks for new variants.