When I say the vaccines can handle variants I mean it. Working on a thread.

AY.4.2 recently accounted for an increase proportion of Delta cases in United Kingdom (UK), Romania, Poland, and Denmark. Here, researchers evaluated the sensitivity of AY.4.2 to neutralization by sera from Pfizer recipients. AY.4.2 was NOT more resistant to neutralization

And then he shows us this graph: 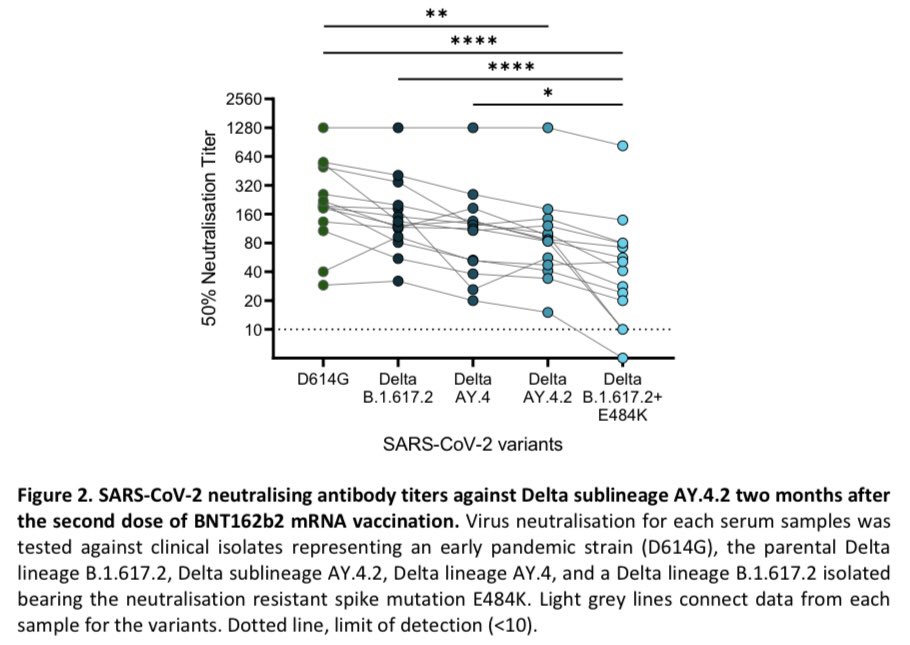 But there are two things to note: When they do a study like this, they just take the variant as defined by the mutations that allow them to group the variants. They don’t look into any further mutations that have emerged within sublineages of the variant. In other words, it’s always looking at the past. At this point, AY.4.2 has given birth to two new sublineages, AY.4.2.1 and AY.4.2.2, both of which again developed new mutations and look like they’re more resistant.

But now you might wonder: Why should I care? It still neutralizes the virus, right? Well, here’s the thing. Imagine you’re a medieval peasant who is sent off to war. You want to bring your morningstar with you, but your wife suggests you bring your pitchfork instead. You would recognize your chances in battle are worse.

And so here’s what happens, when you’re stuck with this poor immune response: Sometimes it’s strong enough to fight off the virus, so you don’t notice your exposure to the virus, as it’s aborted early. When this poor immune response is not sufficient however, you’re stuck with a situation where your body can’t develop the optimal response it could have developed if it hadn’t been exposed to these vaccines. What does that look like? Here’s what that looks like:

Truveta used its COVID-19 study as an example of the platform’s capabilities.

So, ask yourself this: How can you end up with 15% of people vaccinated with Johnson & Johnson ending up hospitalized from this virus upon being infected?

Overall hospitalization risk for this virus is much lower. It should be obvious what’s happening: Most of the time the vaccines protect you from getting infected. When they fail at protecting you against infection however, your body is stuck with such a maladapted immune response that it struggles to clear the virus. If your body had been allowed to learn on its own how to clear this virus, the immune response would have been more efficient and these people would not have had such a high risk of hospitalization.

In this study we profiled vaccine-induced polyclonal antibodies as well as plasmablast derived mAbs from individuals who received SARS-CoV-2 spike mRNA vaccine. Polyclonal antibody responses in vaccinees were robust and comparable to or exceeded those seen after natural infection. However, the ratio of binding to neutralizing antibodies after vaccination was greater than that after natural infection and, at the monoclonal level, we found that the majority of vaccine-induced antibodies did not have neutralizing activity. We also found a co-dominance of mAbs targeting the NTD and RBD of SARS-CoV-2 spike and an original antigenic-sin like backboost to seasonal human coronaviruses OC43 and HKU1. Neutralizing activity of NTD mAbs but not RBD mAbs against a clinical viral isolate carrying E484K as well as extensive changes in the NTD was abolished, suggesting that a proportion of vaccine induced RBD binding antibodies may provide substantial protection against viral variants carrying single E484K RBD mutations.

If your body is exposed to the whole virus, it has the opportunity to focus on developing an immune response to the easiest bits: The rare few places in this virus where it looks entirely different from anything your own body produces. If it’s only exposed to the spike protein, it has to learn how to deal with this virus, solely by working with the spike protein. This means it’s now just going to deploy a wider arsenal, including many “shitty antibodies”, that it would not bother deploying if it could just focus on easy parts of the nucleocapsid protein and other proteins.

And to make matters worse, the immune system is not just forced to focus entirely on the spike protein. It has to focus on an outdated version of the spike protein, so a large share of the antibodies that it’s forced to use don’t even work the way they are supposed to work anymore. Many of these antibodies now merely enhance the infection, making it easier for viral particles to replicate themselves within your own macrophages.

But let’s return to our furry friend for a moment, to illustrate the problem. Imagine this guy took a look at the data and concluded: “Uh oh, the vaccines are about to backfire!” What do you think would happen to him? His peers in the community would get angry, his employer would say that he’s promoting “vaccine hesitancy” and the people who follow him because they like to feel as if they’re smarter than their racist antivaxxer antimasker uncle Bob will get upset.

If you want to deny climate change is caused by humans, you can build a career out of that, Big Oil will give you a salary. If you deny that the vaccines against SARS-COV-2 are a good idea, who is going to pay you? Big vitamin D? Big Exercise? I can give you a list of people who became billionaires through these vaccines. These are people who saw their net worth jump tenfold in a year. Most of the people working in these companies receive options too, they all have a stake in hyping their product. How many people can you think of who became billionaires by saying: “these vaccines will probably backfire”? Your career as a scientist is over when you warn about this ongoing mistake.

The other thing to notice is that as this vaccine evading variant named AY.4.2 spreads throughout the UK, all these virologists and vaccine developers who are watching their experiment blow up in their faces in real time still deny what’s happening. “It just has a 10% replication advantage bruh!” Is what they suggest to you.

But here’s the thing: Of course it only has a minor advantage compared to the rest of the strains, because those other strains are also evolving away from our vaccine induced immune response. They’re all developing their own ways of evading the spike-protein based immunity. Some are a little faster than others so you notice them, but the fact that this strain grows slowly doesn’t mean you can pretend it has no significant advantage over its ancestral strain.

There is nothing out there that you, me, or anyone else can say at this point, that will make these people agree that the vaccines were a bad idea. There’s no standard of evidence you can meet that will ever make them change their minds. They will be going into their graves, denying what they did.

It really shouldn’t take a genius to recognize what’s going on. As I’ve said before, 95% of Dutch elderly above the age of 70 are vaccinated. So why are we seeing this:

“Oh but you can still get infected, you just won’t end up in the hospital!”

Alright cool, so tell me then, why are we seeing this: 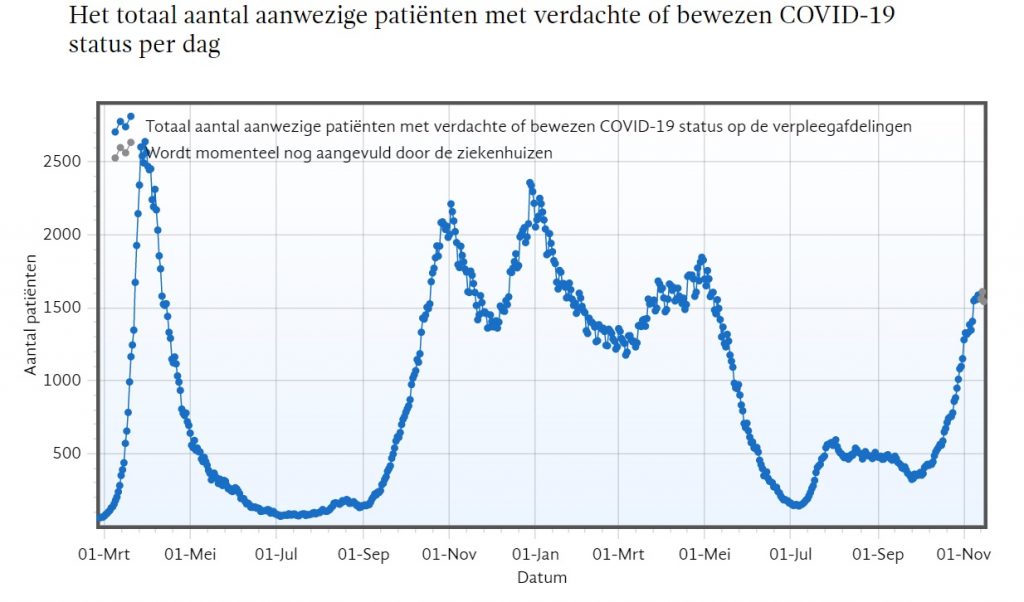 “Well it must be because we relaxed social distancing and because of those handful of conspiracy theorists who refuse to get vaccinated!” Alright cool, how come they’re not dropping dead like flies in Sweden then? It seems to me like it would be useful to ask yourself what they did right. The reason they’re doing relatively well is because a lot of people were exposed to this virus before receiving these “vaccines”. The people who have had (almost) no exposure before receiving these vaccines seem to be the ones in big trouble.

But let’s focus on the crux of the matter. This is what they show you:

And then they try to get you to believe this somehow suggests the vaccine still works, even as your eyes can see the exact opposite. It should be pretty obvious however that the virus has evolved away from the vaccine, leading to the current surges. Any attempt now to deploy boosters is just going to lock in this immune response that no longer works for the long term.

The other thing we need to consider, is that the vaccine cheerleaders will argue that the vaccines still protect against death. You can show them the skyrocketing infection rates, the sort of thing normal vaccines are supposed to prevent and they will tell you that it doesn’t matter, because the vaccines also decrease the severity of the infection, leading to fewer deaths.

But here’s the thing: It has been 1.5 years now. Hospitals have gotten better at treating patients. They’re (hopefully) not going to needlessly put you on a ventilator anymore. The hospitals can only treat patients properly however, as long as they’re not flooded with patients. In the Netherlands, we’re now expecting hospital occupation will exceed the record seen last winter.

The vaccines were supposed to allow us to return to normal. If 85% of adults are vaccinated, 95% of all elderly are vaccinated and we have more patients in the hospitals than we did during the previous winter, then it’s time to admit that the vaccines have failed. If we deploy boosters we will merely double down on the original mistake. Until people can admit that these vaccines have failed, the situation is just going to get worse.