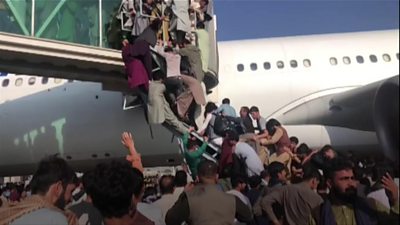 KABUL – Speaking to a large crowd of Afghans at an airport in Kabul who had gathered to say farewell to their former colonial oppressors, local Taliban commander Rahmatullah Mansour sought to remind people that despite this joyous end to Western imperialism and white supremacy, it remains necessary to follow social distancing guidelines.

“Look folx, I am as happy as anyone else that we have finally dismantled the white supremacist patriarchy and returned to self-rule after two decades of Western imperialist oppression, but I want to remind everyone that we are in the middle of a pandemic and what you are doing here is putting people’s lives at risk. We can’t have these kinds of mass gatherings, particularly when vaccination coverage remains so low in our country.” Mansour announced through a megaphone. “I urge all of you who are unvaccinated or not wearing a mask to return home, it’s impossible to adhere to social distancing guidelines under these conditions.”

Mansour nonetheless went on to announce that now was the time to move forward towards a truly diverse and tolerant Afghanistan: “With the white supremacist Christian nationalist patriarchy now finally dismantled, it’s time for us to move forward together as a people. I know that some of you might secretly harbor some degree of masochistic longing for our white oppressors, but I want to remind those of you still suffering Stockholm syndrome what we are now leaving behind.”

“For two decades, we have witnessed an unprecedented pay gap, with women earning on average 50 cents for every dollar that a man earns. Birth control in our nation has entirely been a woman’s responsibility, with women forced to go to charity clinics to receive IUD’s. We plan on mandating health insurance companies to pay for birth control from now on.” Mansour promised.

Meanwhile in Kandahar, local non-binary performance artist Aisha Ghazi announced their latest work to celebrate the twenty year long overdue return to self-governance. A teaser trailer for “Exterior Semiotics” as the performance piece is called, features scenes of Ghazi smearing their menstrual blood over an American flag, before dipping a Ken Doll with a suit and hairstyle reminiscent of an American real estate mogul in a cup of their own urine.

With this new performance art piece, Ghazi intends to challenge toxic white beauty standards that have become ingrained in Afghan society due to twenty years of exposure to Western patriarchal cultural norms. They are currently applying with the local Taliban council for a subsidy and expect to receive a definitive answer by December 2022 at latest.

A local middle-aged Afghan man responded on Youtube in the comments to the trailer with the kind of condescension that might feel familiar to some disprivileged people: “If this is what you want to do with your spare time then that’s your choice, but can someone explain to me why MY TAX DOLLARS should be going towards this kind of nonsense? Don’t you think we have more urgent problems to worry about?” It’s clear that twenty years of Western oppression has left its toxic imprint on Afghan society. “This is the kind of harassment I have to put up with on a daily basis.” Ghazi explained.

Fortunately, other Afghan men proved better capable of thinking for themselves. On the airport in Kabul, Taliban commander Mansour announced to wide applause that from now on, toy stores in Kabul would stop offering Western toys with gendered language to children: “Don’t expect to find any Lego knights or Mr. Potato head toys tomorrow when you go to Toys ‘r Us, it’s time to leave that chapter behind us. I don’t want my sons to grow up with the same kind of toxic gender norms installed in their minds that Western people teach to their boys.”

“If you go to Toys ‘r Us right now, you’ll find a fake vacuum cleaner for the girls, while the boys get to play with toy soldiers and Lego knights. Do you realize what kind of message that sends to children? If you’re a girl, your place is in the house, if you’re a boy, you’re supposed to go on a crusade to Jerusalem. Why do we teach our children this kind of toxic Islamophobic crap from an early age? It’s time we start teaching our sons to respect women and it’s time we encourage our daughters to take charge.” Mansour went on to explain.

The local LGBTQI+ community responded to the liberation of Kabul with great enthusiasm. “Last week, I was prohibited by a security guard from using the women’s bathroom at a night club. I hadn’t shaved that morning and so I was mistaken for a man. Apparently, some people still seem to think that you can just assume a person’s gender based off what they happen to look like to you.” A local transgender celebrity bemoaned. “It’s no wonder the suicide rate among transgender teens is 600% above their cisgendered peers. Can you imagine having to go through this on a daily basis? That’s what trans and gender non-conforming folx in Afghanistan face. It’s 2021, but if you live in Afghanistan it sometimes feels more like 2021 BC.”