Edit: Alright that title is a little overly harsh, but hey it drew your attention didn’t it?

I’ve been reading a bit about Bill Gates divorce from his wife Melinda and there are a few points I find worth making. The problem is that marriage and the notions it’s based on, the idea that there is one person out there somewhere on Earth who is perfectly made to fit your own personality, is a mistake. Nobody thinks there’s one person out there who perfectly fits them as a friend. You have different friends you do different things with. I have friends I joke around with, friends I take psychedelics with, friends I go to parties with, andsoforth.

Somehow however, people think there’s one person who is perfect to love. That’s just not the case. Some people are a better fit for you than others, but that merely means it takes you longer to figure out the ways they don’t fit you. The perfect way to get you to hate such a person is when you’re forced to spend every day living in the same house with them and when they’re the person who prevents you from interacting with other people.

But what if he’s really handsome? What if he’s tall, with long blonde hair and androgynous boyish looks? Yes, then I can imagine feeling jealous. Of her. I can’t imagine feeling posessive because someone else might be more handsome. If I’m not handsome enough for you to feel eager to sleep with, then you shouldn’t be sleeping with me in the first place, because it’s not a pleasant experience for me when you don’t genuinely desire me.

It’s 2021. If you don’t want to get pregnant, it’s really not that hard. Birth control is safe and reliable. If you get pregnant after all, you can have an abortion. If the woman doesn’t want an abortion, you can test a child’s DNA and figure out who happens to be the father. I’m not interested in a woman who expects me to try to control her behavior either. A relationship is not supposed to be a lifelong power struggle, although some women are strangely eager to have exactly that.

If a woman you’re in a relationship with thinks abortion is killing an innocent child, she’s an idiot and I’m not very eager to sleep with idiots in the first place. An abortion involves removing a clump of cells the size of a pea, about a third of which are spontaneously aborted by mother nature anyway. I literally feel more bothered by the idea of running over a frog on my bicycle than I would feel by having an abortion.

The problem is people have all sorts of stupid social norms that they learn from their environment and subsequently take over. As an example, it’s somewhat accepted to sleep around before you marry, but upon marrying someone, you’re supposed to spend the rest of your life sleeping with that person.

If I lived in a prison where I’m only fed tomato soup, I would grow to resent tomato soup. If you live in a relationship where you’re always having sex with the same person and always forced to share a house with them, even when you don’t feel like it, you’re going to hate that person, there’s no way around it.

The other thing I’m too autistic to understand is the phenomenon of the one night stand, popular among Americans and communities dominated by Americans. You install some App on your phone or you go to some bar, then you get drunk and you have sex together with someone and subsequently never speak to each other again. I don’t understand why this exists. If I don’t like someone as a person I can’t imagine myself sleeping with them. I understand it’s theoretically possible, but I’m too socially incompetent to even understand how that would work.

The big problem we face in our society is not stupidity however: It’s snobbery. Snobbery is when people engage in behavior that doesn’t make sense on its own, but is only performed to display to the outside world that you have the kind of personality and interests that we normally associate with intelligent, wealthy and succesful people.

As an example, if you’re reading Kierkegaard in the original Danish, or you’re reading Ayn Rand’s Atlas Shrugged, or you only listen to classical music, then you’re a snob. In some philosophy classes they’ll make you learn German to read German philosophers because they supposedly can’t be properly understood through the translations. That’s pretentious snobbery.

Well, snobbery extends to relationships too. The reason we marry and subsequently uphold an image of forever having sex with the same one person and occupying the same physical space together forever is because we’re snobs. You don’t do this because it’s what you genuinely want, you do it because society expects it of you. That’s the purpose of marriage: Social pressure. You have a massive crowd of people who watch you promise something that is not in your own benefit.

Even worse than marriage however, is the idea of not having sex before marriage. Some people are just truly not sexually compatible. It has been known since time immemorial that men and women differ widely in the size of their genitalia. Sex can be painful, particularly for the woman, simply because the genitalia don’t properly match in size. This has been properly described in the Kama Sutra, but for whatever reason people think this is impossible.

There are plenty of other problems you can have too. Some women suffer vaginismus, that makes it painful for them to engage in penetrative sex regardless of what they might try to avert the problem. There are plenty of other options for them to consider, but that requires them to find a guy (or girl) who is genuinely eager to engage in such alternatives. Some people have a low sex drive, others a high sex drive. These type of incompatibilities can cause severe misery. There’s a reason Evangelical American Christians have the highest divorce rate: No sex before marriage means you find out too late you’re not really that compatible.

And some people are bisexual. That makes the idea of a lifelong marriage to one person even more cruel. There’s just a vast aspect to your personality that you’re subsequently not allowed to explore, rather, you’re expected to deny it to yourself. It causes intense misery and it is a huge factor in sexual abuse, because repressed desires end up becoming uncontrollably strong desires.

But for whatever reason, people can’t figure this thing out. The victims tend to be children. If mom and dad start to resent each other because they made a formal pledge to only have sex with each other, then mom and dad will argue and throw furniture through the house and make the children miserable. If mom or dad sometimes leaves for a weekend on a business trip, do the children care? I can’t imagine they do.

As always, cannabis and psychedelics are incredibly useful in helping you to figure these sort of things out. The nice thing about cannabis specifically is that it makes you more in tune with your own physical body. It also robs you of a lot of pretentiousness, I have had friends independently confirm this to me who had the same experience.

What about having children?

This brings me to the next point I feel like making. I am thirty, so it’s normal for me to wonder whether I want to have children or not. If I were to die within the next twenty years, I wouldn’t want to have children, because that would be terrible for the children. Assuming that I don’t die, there are roughly three possible outcomes we’re facing as a society for this century, that I have to take into consideration:

Option A: Society is going to collapse, because of overpopulation, climate change and resource depletion. This collapse can occur rapidly, or it can be a more drawn out scenario. In the rapid scenario, I burden myself with having to witness my children suffering. In the drawn out scenario, I burden my children with having to face this miserable outcome to their lives and being unable to have children of their own. I assign 80% probability to this scenario.

Option B: Society is not going to collapse. This is probably only possible if we somehow have rapid progress in biotechnology: Rejuvenation therapies to keep elderly people economically productive, lab-grown meat to reduce our climate impact, artificially enhanced photosynthesis to accelerate carbon dioxide sequestration, andsoforth. If we figure these solutions out during the next few years, we would not have a collapse of civilization, but rather, chances are that I would eventually end up becoming practically immortal. In addition, with such a rise in life expectancy, overpopulation would become a bigger problem. If that happens, I could just choose to have children a hundred years from now.

Option C: Somehow nothing drastic happens, global warming turns out to be massively overhyped, resource depletion also turns out to be massively overhyped, everything just kind of continues the way it is right now. Out of these three scenarios, I only consider this scenario to be one where I would be likely to regret not having children. I assign about a 10% probability to this scenario. Considering the decline in fertility rates, I consider it likely that I wouldn’t have very large regrets about not having children, because many people would face the same situation.

There’s also the cost aspect to consider. I have some savings, but I’m not rich to the degree where having children wouldn’t reduce my options in life. Never having to work again? Without children it’s possible right now, but with children it’s harder to do.

Overall, all these factors make me not very eager to find someone to have a child with right now. I have reason to believe that my judgement on this issue is clouded by the Darwinian imperative: Our genes are designed to get us to reproduce. Happiness and emotions are tools that our genes use to encourage us to have children, but they’re also perfectly able to cloud our reasoning skills to convince us to have children.

After all, this is the most scary graph in the world: 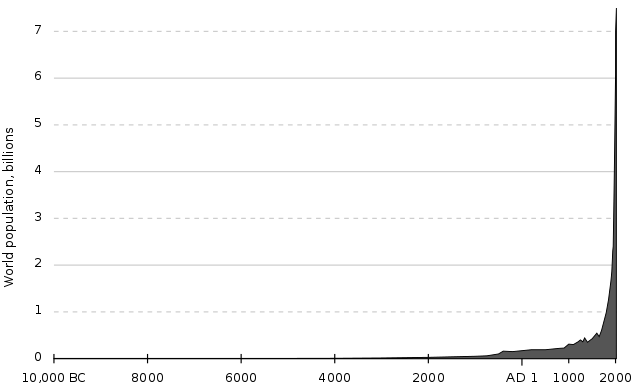 But this is the second scariest: 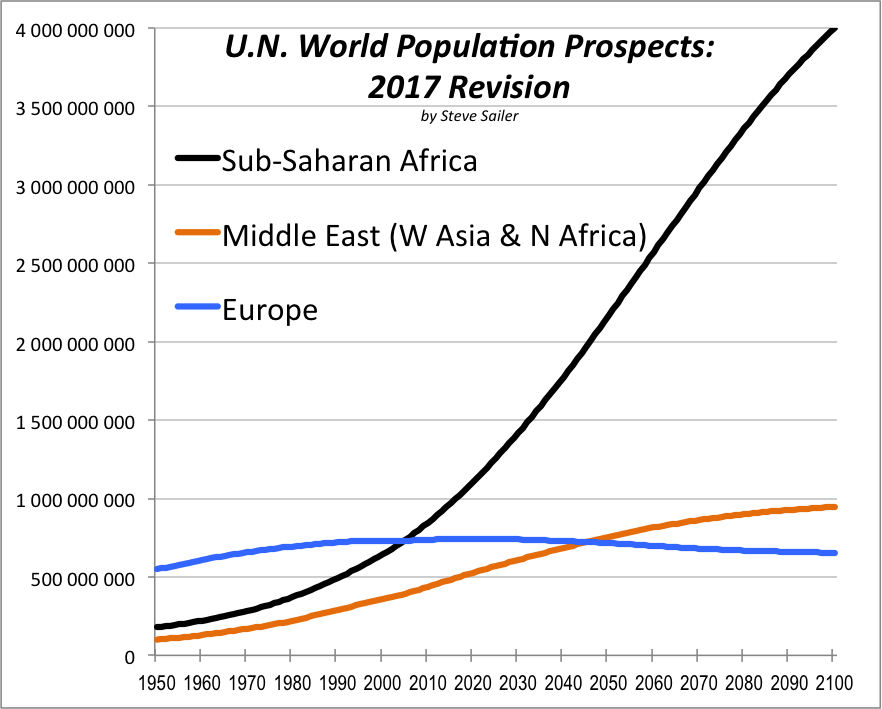