To start with, psychedelic experiences in nature with natural entheogens begin to change over time. The first ones are very mystical and almost universally positive. Later on, as you take them more often, you begin to discover a dark undertone: Existence is not a free lunch. Nature has a shadowy side, a place where demons seem to live. These demons are beings of passion, unconstrained by reason.

When you take psychedelics, you start to become one with nature. During a summer evening, your nose can pick up on all the terpenes released by the trees during a drought. The whole world feels like a bouquet of the most beautiful flowers. But you also feel their thirst and their suffering. The animals start to behave strangely. Most animals are not afraid of me on psychedelics, I will have frogs sitting next to me, along with rabbits and deer. Cats become deeply intrigued by me.

The only animals that become terrified of me are dogs. Some also seem to get angry. You need to stay away from dogs when you’re tripping. Another animal you will see is the Serpent. Initially, you will see it in the form of hallucinations. During later trips, you will run into snakes in the actual material plane. I have only seen a wild snake once in my entire life, it was during the come-up of a mushrooms trip.

The serpent is a cursed animal that lost its legs as a punishment, because it is a deceptive animal that is going to decimate the human population in two ways: It is going to drive its two sharp fangs through people’s skin to poison and coagulate their blood and it is going to constrict people to suffocate them to death.

As you fuse with nature during successive psychedelic experiences, nature starts to lust for you. When I say nature, I mean some sort of higher consciousness that seems to be linked to the interaction between mycorrhizal fungi and the roots of plants. It’s a feminine entity that seems to lust after men who obey and yearn to please her, but she is incapable of restraining her lust, like a black widow she ends up consuming the men she loves.

“No dude, I’m pretty sure that’s just you taking too many drugs that melt your brain.” I understand that perspective. I also think you can’t judge what I’ve experienced, if you haven’t experienced it yourself. But I read quite a bit about pre-Columbian mesoamerican cultures, where the upper class had access to most of the entheogens that I have taken myself.

If you look at those cultures, nothing I’m saying here will seem like the ramblings of a delusional schizophrenic. Rather, it will seem as painfully obvious. You can look for example at the ritualized bloodletting that the elite engaged in. Mesoamerican kings would pierce their penis, to draw blood that nourishes the soil. This sacrifice reflected the renewal of divine energy. Among Andean cultures, children were sacrificed to Pachamama, who is seen as an Earth Goddess. 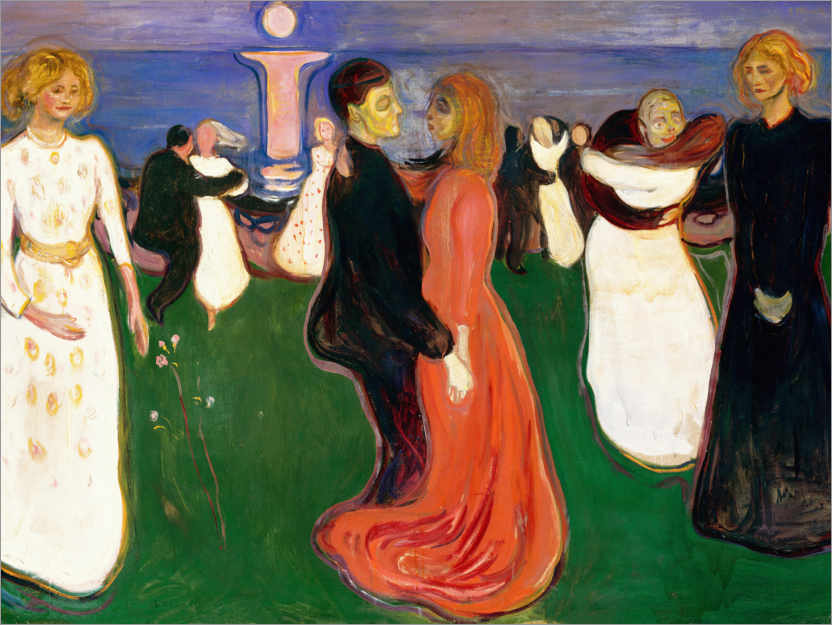 Edvard Munch’s “the dance of life”. Pay special attention to this painting and you will understand what I mean.

This is a common trope that you witness everywhere in pre-Abrahamic cultures: The idea of a feminine entity within the Earth, that consumes the flesh of those she loves. And ultimately, that’s the only real sincere problem I have with feminism: It might seem nice to let women rule the world, but the problem is that a woman will consume the man she loves. When you really get a woman off, this becomes very obvious too: She wants to eat you.

The woman can’t control this. It’s not her fault, it’s just hardwired into metaphysical laws. When she takes more than she gives, she ends up as the black widow. That’s her punishment, she kills the man she loved. Most men will be happy victims, biologically driven like a praying mantis to have their heads bitten off, so patriarchy was originally established to protect men: Passion was forced into submission to reason, to the bare minimum extent necessary.

The material plane we inhabit was created through a fusion of two elements. There is the Apollonian masculine element of the sky, that reflects reason, hierarchy, science, justice and order. There is also the Dionysian feminine element of the Earth, that reflects passion, liberty, magic, beauty, the arts and equality. Abrahamic religion is entirely the Apollonian retelling of what happened.

Ultimately, the ever greater drive for bloodier and more painful sacrifices to this feminine Dionysian element that inhabits the soil and gave birth to life, was brought to a halt when the Apollonian element sent down his son, a perfect flawless man who was tortured to death and served as the perfect sacrifice. This brought forth an uneasy truce: All those who submit before him, who recognize his sacrifice as perfect and don’t attempt to outdo him, are protected from becoming consumed by this force within the soil.

In late 1962 and early 1963, brothers Santos and Cayetano Hernandez, a pair of petty criminals, devised a scam which they thought was brilliant and would solve all their monetary problems. They reached the small town of Yerba Buena, (a marginalized community in northern Mexico, with a little more than 50 people, all of them mired in extreme poverty and mostly illiterate) and proclaimed themselves prophets and high priests of the “powerful and exiled Inca gods.”

They were told that the Inca gods, in return for worship and tribute, would give them treasures hidden in the caves of the mountains surrounding the village, (where they also performed their rites), and would soon come to claim authority over their former kingdom and punish the unbelievers.

The cult continued running like that with no problem for a while, after which the believers began to grow impatient at not seeing the promises fulfilled. So the brothers devised a plan: they went to Monterrey in search of prostitutes who wanted to be part of the farce, and made contact with Magdalena and her brother, who agreed.

During a ritual, they presented, (using a cheap magic trick: a smoke screen), Magdalena Solis as the reincarnation of a goddess. What no one counted on was that Magdalena would believe in the lie.

Shortly after joining the sect, Magdalena took over. By then 2 fans, tired of the sexual abuses, wanted to leave the sect, the other believers, prisoners of fear, were charged before the “high priest” Solis. Condemnation was clear: the death penalty. The two unfortunates were lynched by the terrified adherents.

Solis, drank from the chalice and then gave drink to the priests (the Hernandez Brothers and Eleazar Solis), and finally gave the other members. Presumably this gave them extra-natural powers.

Now based on elements from Aztec mythology, “the blood was the only decent food for the gods, through it they preserved their immortality.” The goddess needed to drink blood to stay young forever. Magdalene was supposedly the reincarnation of the Aztec goddess Coatlicue.

The butchering went on for six continuous weeks in 1963, a period in which 4 people died in this terrible way. In the last sacrifices they reached the point of dissecting the heart of the victims alive.

This sounds too crazy to be true, but it really happened. This is simply what happens when you take mescaline (they took it in the form of Peyote) and other entheogens (in their case cannabis) in an isolated group context: The Dionysian element returns to life and the matriarchal Goddess cult of human sacrifice is revived. It essentially took them a few weeks of heavy use of psychedelics, to revive the core of Aztec mythology.

The other thing I felt is worth explaining is that psychedelics will reveal to you that myths don’t just lay in the past. In the words of Ernst Jünger: ‘Myth is not prehistory; it is timeless reality, which repeats itself in history.’ Through use of psychedelics, particularly LSD, you will find the myths that you are aware of reenacted within time.

Here’s another quote worth sharing, from Stanislav Grost: “Religious and mystical experiences represent the most interesting and challenging category of LSD phenomena. Their incidence seems to be directly related to the dosage and number of previous sessions of the subject. They can also be facilitated by the special preparation, set, and setting of the psychedelic treatment technique. The experience of death and rebirth, union with the universe or God, encounters with demonic appearances, or the reliving of “past incarnations” observed in LSD sessions appear to be phenomenologically indistinguishable from similar descriptions in the sacred scriptures of the great religions of the world and secret mystical texts of ancient civilizations.”

This is useful to keep in mind. Your first few psychedelic trips tend to be along the lines of “woah I see interesting patterns and I no longer feel burdened by trauma from the past”. Later psychedelic experiences, particularly with LSD, become different. You see things that appear to be magical. You even see grand religious myths reenacted in front of you. You may even meet demonic entities.

Generally speaking there is a small thin thread of rationality you can cling onto, but you will find yourself overwhelmed with visions and experiences that seem supernatural. Imagine you find yourself wondering through the street, thinking about a moment in your past where you had to take a painful decision. You see a book laying on the ground, you open it and the first sentence you read is “you did the right thing”.

You can interpret this as a coincidence, if you want. Your mind always maintains plausible deniability, so that what happened fits within the constrains of reason and material determinism. Under the influence of LSD however, you will find yourself overwhelmed with these seemingly meaningful coincidences that harbor a deeper meaning.

Datura and other nightshade plants interfere with cholinergic neurotransmission, so you enter a world in which reality ceases to be observable, losing all touch with consensus reality. You can smoke non-existent cigarettes and hold conversations with people in your room who suddenly disappear, never to have existed in the first place. It is within this realm that magic takes place, the nightshade plants have traditionally appealed to witches. Accounts from Native Americans suggest that they look at Datura as a hostile plant that contains a strong power, that one must learn to subdue.