Humans are overrated. We have all sorts of lofty notions about human rights, but the term human rights is significant in itself, as it implies that you have rights because you’re human. What is it about being human, that makes you so special? The answer is of course, nothing. Add up the weight of all humans together, add up the animals we domesticated, then compare them to wild land vertebrates and this is the graph you’re left with: 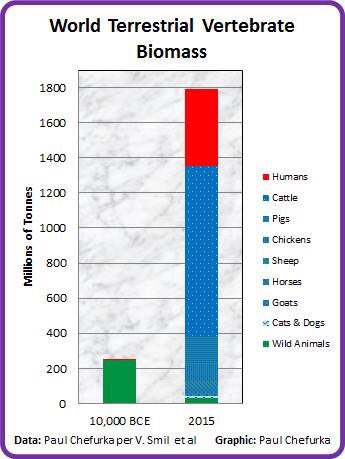 Take a deep careful look at this graph. Meditate on it. Now you understand why wise men don’t block traffic. Wise men either become hermits in wooden shacks in the forests of Finland, or they get a Phd in microbiology and start performing gain of function research on bat viruses.

The simple fact of the matter is that I can’t claim to care about the lives of those who don’t demonstrate a deep love and knowledge of the non-human world around them. Most human beings are oversocialized. People who had more children in recent generations are primarily those who got along better with other human beings, so the human mind evolved to become very good at displaying empathy towards human beings, because the rest of us who realize that humans behave like a plague are gradually being lost to the gene pool.

I like people who are bad at getting along with other people. I consider that to be a product of virtue. Honesty for example, is the kind of virtue that makes it difficult to get along with other people. In the Netherlands we had protestors, who complained that Billie Eilish waited too long with endorsing “”black lives matter”. Under these circumstances, it’s clear that people become dishonest. If you wouldn’t signal submission, but honestly pointed out what the statistics demonstrate, your career as an artist would be over. The burden of honesty falls on anonymous trolls.

The problem I have with most vegans, environmentalists and animal rights activists, is that their empathy for non-humans is a kind of spill-over side-effect of having too much empathy in general, whereas my empathy for non-humans is something very primal and instinctive. The thing with empathy is: When you empathize with everyone, you empathize with nobody. As an example, if Greta Thunberg is going to endorse the 90 IQ left-wing mob on Twitter who pretend that overpopulation is a racist hoax, she should just go back to school. When much is given to you, much is asked of you. Normies can be forgiven for being dishonest, but Asperger’s is associated with increased honesty, so I am really disappointed in her when she chooses the easy road.

Bad activism is worse than no activism. Bad activism is when you refuse to address the root cause of our problem: Our refusal to acknowledge that life is a zero sum game. Humans are like any other animal, we seek to gather resources to enrich ourselves, then we use those resources to reproduce. Socialists will tell you that we suffer from too much inequality, but they’re skipping over an important point: Humans have stopped reproducing, thanks to inequality.

The reason young Europeans have hardly any children, is because young people are stuck in a state of “forever getting your shit together”. The reason they’re stuck in that state is thanks to dramatic inequality. You can’t buy a house with a garden because we suffer from a housing shortage and you’re paying off your college debt, so you rent some shitty appartment in Amsterdam where you invite your tinder hookups, or you have a mediocre relationship with a girlfriend who looks for excuses to start screaming and crying at random intervals (hint: If you were a millionaire she wouldn’t dare to behave like that because she knows you wouldn’t have to put up with it). It sucks for young peope who live like that, but overall it’s a good thing, because it reduces the human population.

When you have a handful of billionaires and the rest of humanity is impoverished, then those billionaires can start working on solving existential problems, while the rest of humanity stops reproducing and starts injecting fentanyl. You might not like that, because it requires humility, but I think it works. We’re not going to land this vessel with seven billion people.

I want to ask you a simple question. We have lost 25% of the Bornean orangutan population in ten years. What would you sacrifce for them? If you think we’re losing the orangutans because we’re not building solar panels at a fast enough rate or something along those lines then I can’t help you, you’re already lost. No, you need to be asking yourself what you are willing to give.

To start with, try being a man and speak the truth. The Indonesian archipelago is overpopulated and a 90 IQ religion invented by an iron age warlord in the Arab peninsula is making the problem worse. If Greta said that, she would stop being invited to the conferences. You’re not going to solve the problem without saying it however. Holding up a sign on social media won’t be enough to convince people that God doesn’t want them to multiply like bacteria in a Petri dish.

But that’s not enough. I want you to accept the bottleneck. “We all just stop having more than one child and then around the year 2080 the population will peak and everything will work out fine.” No, of course not. That’s not how this thing works. We need a rapid reduction in our population, because we have exceeded our carrying capacity and temporarily masked the problem with some techno-fixes. You might not like it, but that’s the reality we’re dealing with here. This planet wasn’t meant to accommodate 7 billion omnivores with our body size.

There are two options. We can rapidly reduce the human population, or we annihilate the world around us. You can see the symptoms for yourself, the writing is on the wall at this point. Where have the insects gone? If you’re an adult, surely you must remember that we had far more insects than we now have? We occupy half the world’s photosynthetic capacity right now. The Indians and Africans aren’t going to be content eating cups of rice forever. You’ll have a Mcdonalds and a Burger King opening up in Kinshasa if you wait long enough, it’s a matter of time.

So, to reduce everything to the lowest common social media denominator, there are two teams here: Team Humanity and Team Bat Virus. Pick your side. On the side of Team Humanity, you’ll find hypersocial 90 IQ hashtag activists who try to cancel some middle-class blonde woman because she voted for Buttigieg.

On the side of Team Bat Virus, we keep our mouths shut, because we don’t want to attract attention. We work in obscure Chinese level 4 biosafety facilities, where we cultivate human cell lines in the presence of exotic bat viruses and perform Gain of Function research that makes American college professors piss their pants. Our hero, is batwoman Shi Zhengli.

Now you’re going to say that I endorse the “conspiracy theory” that COVID-19 escaped from a Wuhan biolab. I don’t have any strong opinions on that theory. What I do know is that the old SARS virus has escaped from Chinese facilities three times in one year. I also know that Shi Zhengli performed gain of function research that was considered very dangerous by the Americans.

The point I’m making thus is that I don’t endorse the idea that COVID-19 escaped from a lab, I don’t have sufficient information to judge that theory. However, I fully endorse the sort of scientific research Shi Zhengli is performing. I don’t exactly comprehend what benefit to humanity her research might serve, but I am fully convinced that we should be listening to the scientists in this case.