Everyone is focused on the war in Ukraine right now, but I only really bother posting on Twitter about that. Instead I wish to make a pretty simple point today that requires little elaboration: Whereas Delta broke through the waning vaccine induced immune response, Omicron benefits from it. That is, we have now entered the brave new world in which mass vaccination is causing mass infection with SARS-COV-2.

To illustrate this, I think it’s useful to look at countries with different vaccination rates and to ask ourselves the following question: How do the different waves compare to each other in height? What I’m arguing is that countries that have not practiced mass vaccination, have an Omicron wave that is of comparable height to the Delta wave.

On the other hand, countries that have vaccinated most of their population, are seeing an Omicron wave that led to anywhere around ten times as many infections during its peak and most worrisomely, appears to stay stuck above the peak of the Delta wave, something that doesn’t happen in countries with low vaccination rates.

So first we’ll look at some mostly unvaccinated countries and see what happened there.

Here’s Bulgaria, with 30% of its population fully vaccinated:

We see a wave that peaks at about twice the Delta wave.

Here we see Algeria, with a 13.7% full vaccination rate:

We witness a wave that peaks at around 1.4 times the Delta wave and sharply declines again.

Here we see South Africa, which has a 29% vaccination rate:

It peaks at roughly the same height as the Delta wave.

And now we’re going to look at countries that have vaccinated almost their entire population.

Here we have Portugal, which has vaccinated 91% of its population: 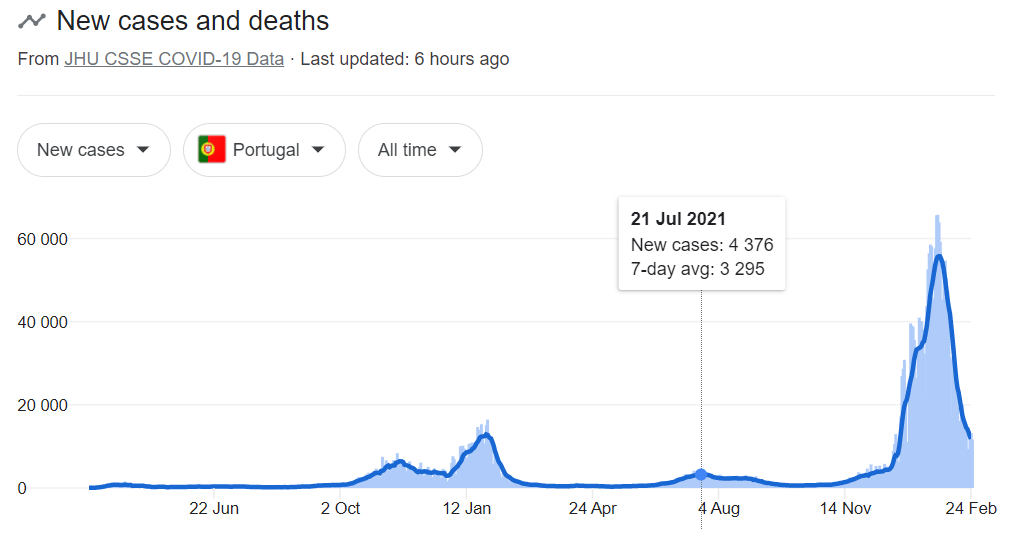 Its cases now peak at around 15 times the Delta wave.

It’s worth mentioning that Portugal was the media darling, because of their high vaccination rate. Their prime minister predicted in July they were on track for herd immunity and would be able to drop all measures soon.

Here we see Denmark, another highly vaccinated nation, with 81% of its population fully vaccinated: 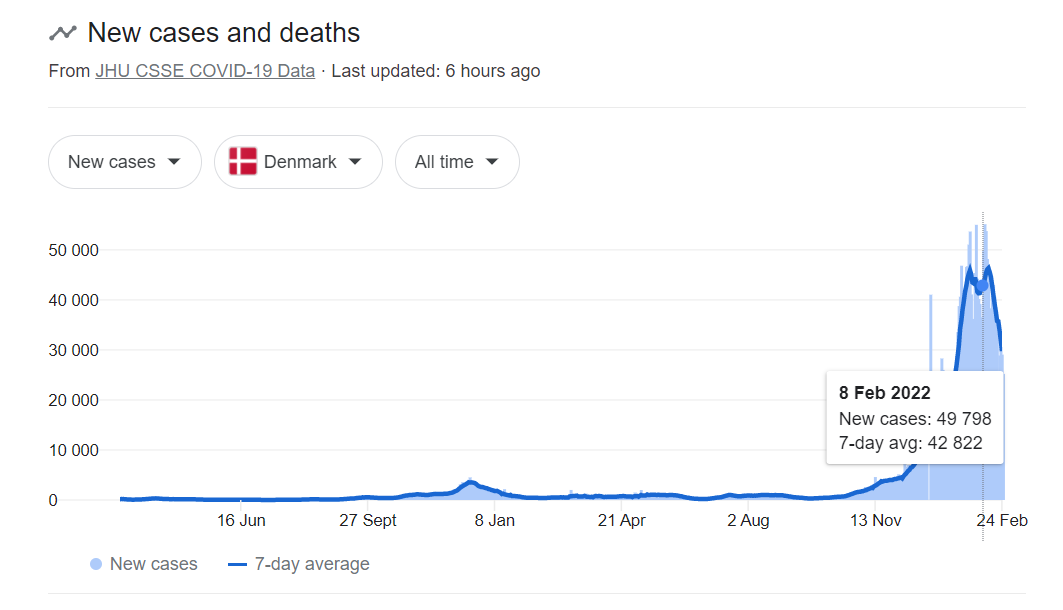 The Delta wave can barely be spotted, Omicron peaks at around fifty times the Delta peak.

Here we have Israel, another highly vaccinated country that was first to begin giving people booster shots: 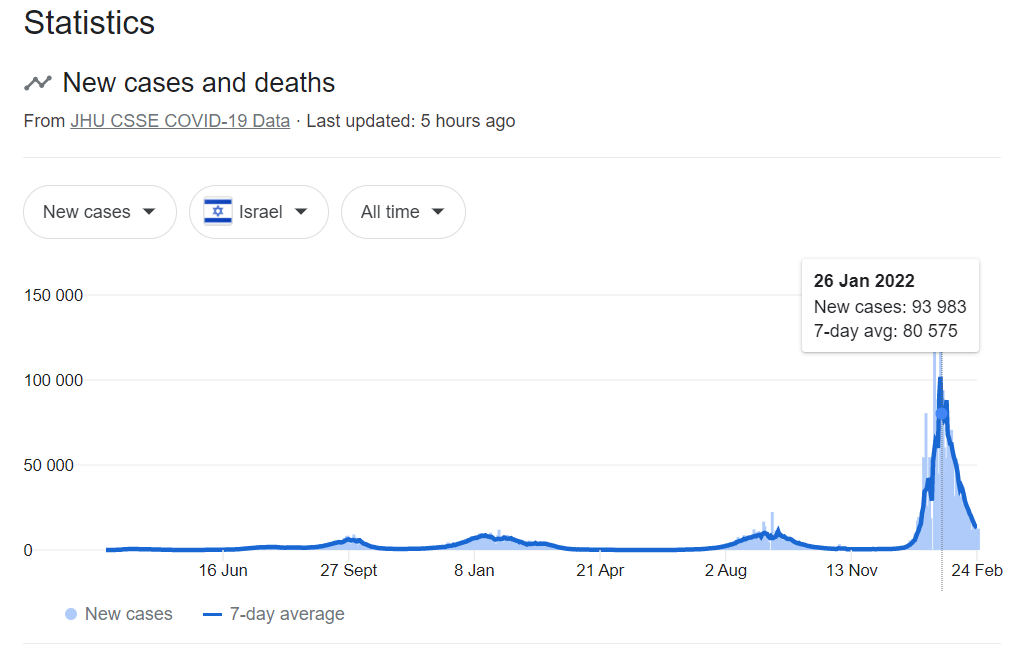 Israel’s Omicron wave peaked at around ten times Delta, but importantly, it appears to drop down to a baseline that is still above the 7-day peak of the Delta wave. Denmark is not done dropping yet, but Portugal appears to similarly stay stuck at a high base of continuing infections, that exceeds any of its previous waves.

Whereas in Algeria, Bulgaria and South Africa Omicron appears to decline to very low levels again, the highly vaccinated nations are seeing infections stay stuck at a level above any of the previous waves. Testing is never a precise indication of levels of virus in the community, because people only get tested under certain circumstances, but we can also take a look at RNA in sewage to see what’s happening.

Here is RNA in sewage of the Netherlands, another relatively highly vaccinated country:

More copies of the virus represents more opportunities to try out different mutations.

So, I will repeat what I have said before:

A vaccine against a novel coronavirus with high potential for variability, that generates non-sterilizing immunity for around six months, erodes natural immunity and is given indiscriminately to ~80% of the Western world’s population will lead to a longer and deadlier pandemic.

In fact, we see that Scotland has stopped publishing its statistics, because the same numbers that showed protection against death through the Delta wave have stopped showing protection now that Omicron has grown dominant.

A chronic infection that has evolved to overcome your antibody response is a big problem for a number of reasons. To start with, chronic viral infections lead to T-cell exhaustion. This is a gradual process, that eventually makes it easier for this virus to spread through your body. Second, COVID-19 is better thought of as a vascular disease that damages your endothelium than as a respiratory disease. This is for example why we see increased risk of stroke in people who suffer mild infections, for weeks after the infection.

If, at this stage in the process, you would still want to reign in this pandemic, then the way to do it would be to start a campaign of mass prophylactic treatment. There are certain dietary factors that have made SARS-COV-2 much milder in Africa and East Asia than in Western nations, an important aspect seems to be the fact that plant proteins, particularly legumes, contain natural protease inhibitors that hinder viral replication when they are not cooked at excessively high temperatures.

Unfortunately, governments just seem eager to pursue the sort of policies that are making the situation worse. There is nobody who can prove to you that vaccinating naturally immune people will help protect them from SARS-COV-2 in the long run, in fact I have already shown you the evidence indicates that vaccination destroys natural immunity and thus sets people up for reinfections. And yet, the governments continue injecting people with these vaccines, not even bothering to check whether the recipients have already developed natural immunity against this virus.

You can expect that the outcome of this mistake will be very deadly.