Mass vaccination with leaky vaccines leaves SARS-COV-2 with no other path towards survival than for it to evolve to use our vaccine induced immune response to its own advantage. Because there’s an enormous cohort of people in the Western world with similar immunity to one another because of the vaccines, that’s the niche this virus now begins to adapt to.

The problem with these vaccines is that they generate a response to an identical version of the spike protein in every single person who receives them. It’s the equivalent of a village where everyone installs the same lock on their door: The burglars now just have to work on developing one particular key.

If you make the whole population’s immunity dependent on one particular protein of one particular variant of a novel virus, you put our collective immunity at a tremendous disadvantage in the arms race that is inevitably going to take place against this virus.

As we’re left with fewer vaccine induced antibodies that still work against Omicron, evolutionary pressure to overcome the last few antibodies too increases dramatically. That’s why you see the following problem:

A few months ago virologists came up with a hypothetical coronavirus that almost completely escapes the vaccine induced immune response. Nature then came up with a version that’s even more capable of escaping the vaccine. It’s called “BA.1 + R346K”. It won’t shock you, to hear that this version of Omicron is rapidly becoming more common: 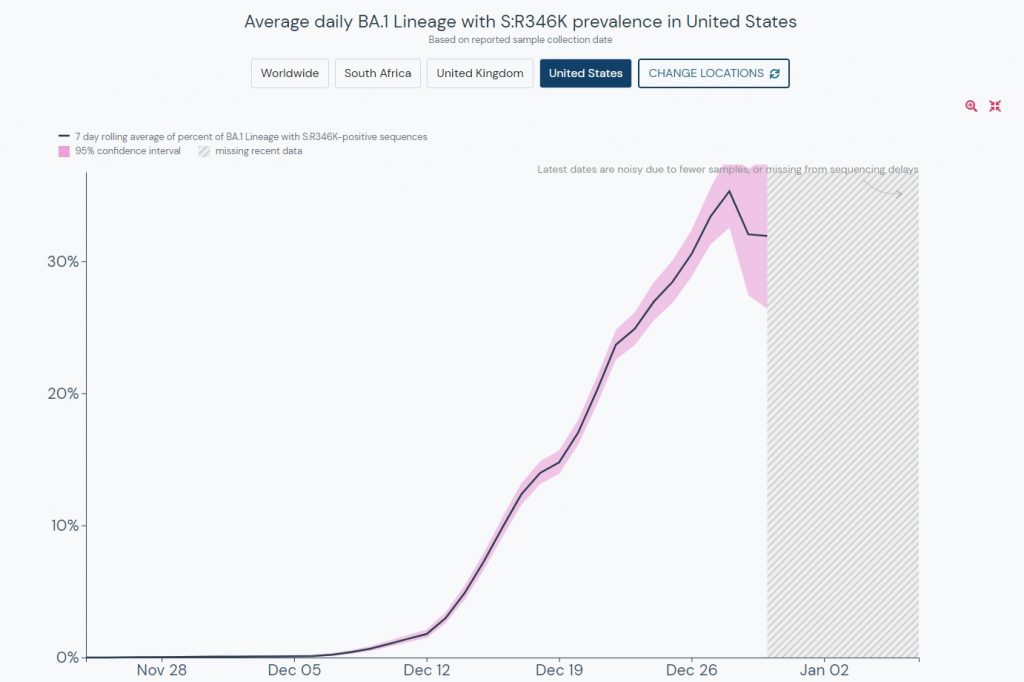 That’s the problem you’re dealing with: Any study claiming that boosters work against the latest variant always looks at the past and can’t tell you how the situation will change in response to its widespread deployment.

But in Denmark something worse is apparently happening. Omicron was capable of entirely replacing Delta in a matter of weeks. This demonstrates a big reproductive advantage. But now it’s apparent that there’s a different variant of Omicron, that has entirely replaced the original Omicron seeded in Denmark in just four weeks:

Its name is BA.2 and all the evidence would suggest it’s better adopted to spreading in humans than the version people were studying. This is what I warned about a few weeks ago: If Omicron evolved in mice, then after its jump into humans you’ll witness it shed those mutations that favor replication in mice at the cost of replication in humans.

It leads to this epic hockeystick: 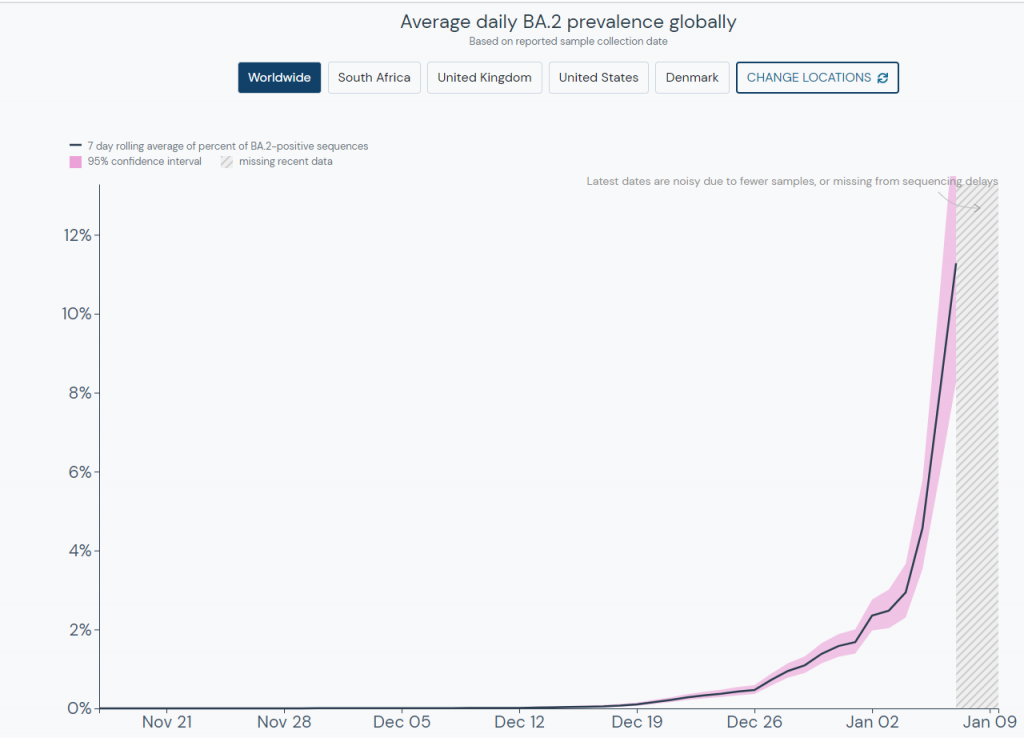 You can take a look at the mutation profile of BA.2 here.

Almost everything we know about Omicron is about BA.1, the standard version. BA.2 looks very different and is probably going to show up everywhere in the coming days, it’s already widespread in Denmark and Sweden.

What seems to have happened is that governments have thrown in the towel: Everything they threw at this virus failed to make a difference (or made it worse and had to be covered up), so now they finally want to get people to accept it as part of life.

But for that to happen, requires a population that develops herd immunity against the virus. It should be pretty clear at this point, that no such herd immunity has developed so far. We are seeing more people getting infected than ever before. They are barely testing people in the Netherlands now, but yesterday we had more people who tested positive than at any previous point in time, despite testing far fewer people.

Why is the population not developing immunity against this virus? What is stopping us from bringing this misery to an end? This is an important question to answer. You can look at all the evidence, most Western countries are now starting to report that vaccinated people have a higher chance of catching Omicron than unvaccinated people. Some studies report that boosted people do have a lower chance of catching it, but this probably mainly reflects behavioral differences: The boosted people are really scared of SARS-COV-2, so they take far more effort to avoid interactions that can cause them to get infected.

The only continent that seems to be spared by SARS-COV-2, is the only continent that’s not vaccinated. Scientists are looking at a mystery: How did Africa avoid a covid catastrophe? We see this pattern everywhere. Highly vaccinated countries are having continual outbreaks of this virus. The reason is relatively simple: It’s much easier for evolutionary processes to overcome homogeneous Spike-directed immunity, than for evolution to overcome the diverse natural immunity developed through infection from multiple variants.

In highly vaccinated populations, a new variant with a handful of Spike mutations will be the equivalent of a burglar who stumbles upon a key that opens all the locks in the village. In populations with high levels of natural immunity, there is no magical key that opens all the locks: One person’s immune response is focused on the Nucleocapsid protein, another person’s response on the Membrane protein, yet another person’s response is focused on the Spike protein. One person has experience with the Spike mutations from Delta, yet another person developed his immunity from Alpha.

No matter what new outfit the virus wears, people will always be recognizing parts of it. In contrast, the vaccine is the equivalent of telling people to look for a burglar who wears round sunglasses. The booster should be considered the equivalent of telling people who realized after encountering him that he also carries a big bag with him: “No, no, forget about that big bag with tools, you’re mistaken. Remember, I told you: It’s the sunglasses you need to be looking for.”

Once the governments began with this vaccination program, all bets were off. Whereas every previous new virus that jumped the species barrier into human beings ultimately died out or became endemic through diverse widespread natural immunity, for the first time in human history, we decided to intervene in this process and endowed everyone with a very similar artificial immune response to a tiny part of the virus that rapidly changed to use that artificially induced immune response to its own advantage.

With natural immunity in healthy people with properly functioning immune systems, subsequent infections become milder. A reinfection has a 90% reduced risk of leading to hospitalization. That’s why South Africa had such a mild Omicron wave. Breakthrough infections on the other hand, when the virus bashes through your artificially induced immune response, are often severe. 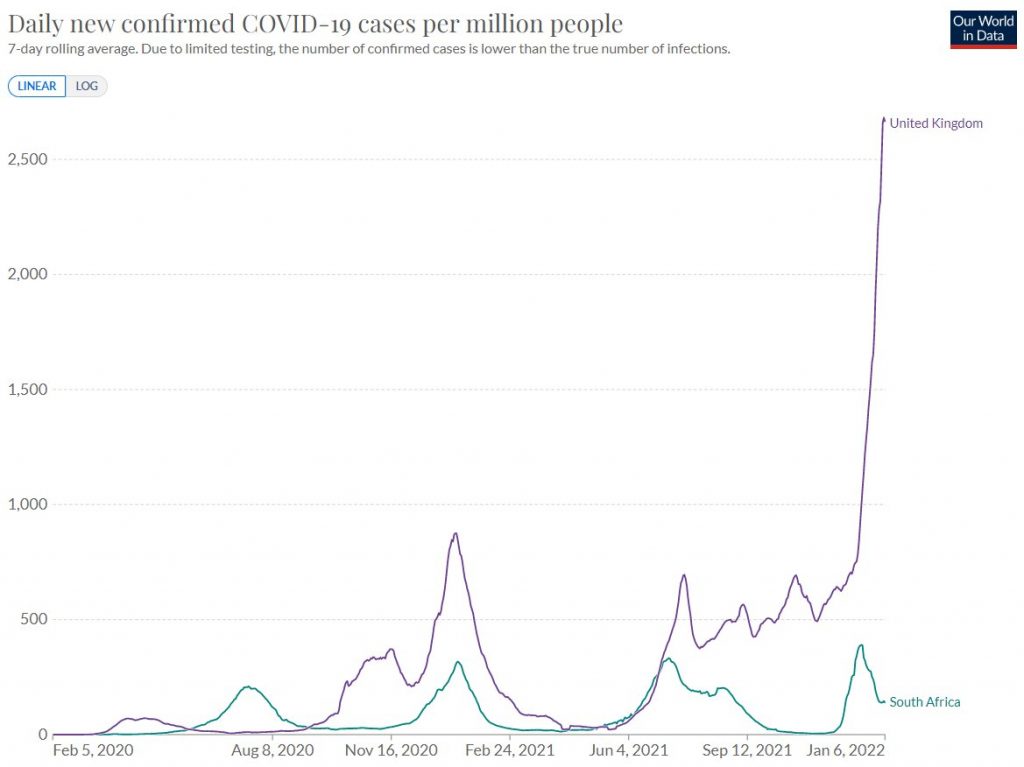 You’re dealing with a self-inflicted wound.

But if you really want to understand what’s happening, the place to look is Israel. Israel is ahead of the rest of us because they began administering boosters earlier and what do we see? 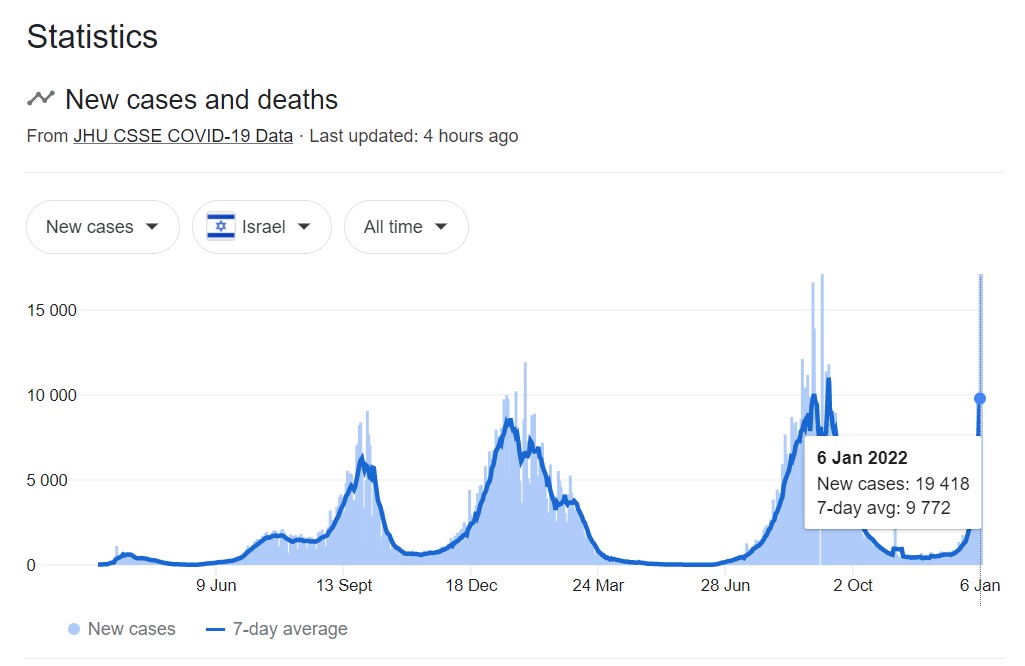 A record number of infections, with no end in sight. Remember how they wrote “this is really a three dose vaccine“? Well, if you look at Israel, you’re still screwed even after three doses of the vaccine, because the booster’s effect only lasts for a few months.

Vaccination however is subject to diminishing returns. Consider this study in the Influenza vaccine. After three previous doses of the seasonal influenza vaccine, the vaccine’s effectiveness drops dramatically in healthy young Japanese teenagers. The effect is seen in the elderly too, where every successive vaccine’s efficacy is interfered with by every previous vaccine:

Vaccines also interfere with each other. The influenza vaccine increases the risk of admission for non-influenza respiratory infections. So, the Dutch government apparently wants to inject everyone with another three shots in 2022. Has anyone ever considered the possibility that this problem doesn’t have a cheap and easy techno-fix?

Has anyone ever considered the fact that the human body has limited immunological capacity? What happens if you start giving us three shots every year against whatever you expect the latest variant of corona to be? You need your immune system not just for pathogens, but also to clean up internal damage.

Corona viruses are flexible and generally constantly reinfect us every winter. SARS-COV-2 is no different. If everyone has an identical vaccine induced immune response against an old version of the Spike protein of SARS-COV-2, then we’re just making it easier for this virus to reinfect us in a massive sudden wave. That’s what’s now happening. It’s not coincidence that Omicron causes such a massive wave, much bigger than any previous wave.

A proper vaccine would consist of a live attenuated vaccine, administered intranasally, to induce mucosal immunity. To avoid encouraging the virus to overcome this immune barrier, only high risk demographics would be vaccinated.

For younger low-risk people like me, the proper response would be to simply emphasize healthy living and to offer effective prophylactic treatment. SARS-COV-2 can still cause long covid symptoms in young people, but this also happens in people who get infected after being vaccinated. Mass gatherings for young people during the summer should have continued. The summer is the best time for young people to get infected with this virus.

Unfortunately that didn’t happen. They gave everyone these vaccines, which prepare your immune system for an old version of the virus. Many people received these vaccines before ever being infected with the virus, which causes a massive original antigenic sin response, as the body is hampered in developing a proper immune response against this virus. Others have had natural infections, but received boosters afterwards that reduced the breadth of their immune response.

We’ve now had a big wave of BA.1 Omicron, but now we’re going to see the next wave, of BA.2 Omicron. And when we do, it’s going to become rather painfully obvious that these Omicron variants only cause issues in highly vaccinated populations.

What I wonder is: When do people who have now received three injections against a virus that still ends up infecting them and making them sick start asking the hard questions?