Throughout history, whenever human beings lived closely together under conditions of high population density, we ate plant based diets. The main reason for that is pretty simple: Conversion of calories from one layer of the trophic pyramid to the next is inefficient. For every 100 calories of feed, cows produce 1 calorie in beef. For every 100 grams of protein fed to cattle, you get 4 grams of protein in the form of beef.

If the whole world wanted to eat the diet that Americans eat, it wouldn’t be possible, we simply don’t have the physical space on our planet. That’s why throughout history, almost every civilization had grains as their staple crop. Americans spray dangerous pesticides like glyphosate on their crops that kill your gut bacteria, so many Americans who suffered from various health problems  have stopped eating grain.

Often, that does lead them to feel better for a while. But for whatever reason, they never bother asking themselves why their grandparents had no issue eating grain, whereas it makes them sick. And rather than figuring out how to get food produced from healthy grains produced with few pesticides like rye, they decide to stop eating grain altogether.

Instead of looking towards healthy ancestral diets, Americans look towards the furthest corners of the planet, to find people who live on a diet that appeals to them: Few plants, mostly meat. Meat is very affordable to modern Americans, because of a giant system of subsidies for the grains fed to the animals they eat: 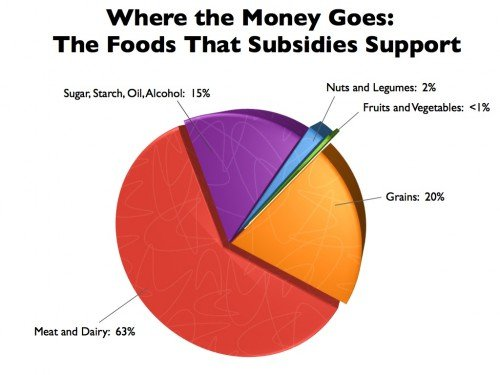 Meat and other animals products are made artificially affordable through the use of these subsidies.

Americans will try to defend the diet that is made affordable to them through various subsidies, by pointing at various tribes where people only eat meat. However, almost all these tribes have a few things in common with each other, that they don’t have in common with Americans:

-Genetic adaptations to their diet

-Consumption of wild animals not exposed to antibiotics, with a high rate of microbial diversity

-Consumption of a wide range of organs

-Unique climate, with freezing temperatures that affects the growth rate of pathogenic bacteria

And so the outcome seen in Americans will be different from what we see in remote hunter-gatherer tribes.

Sometimes in nature, we witness something called a state-shift. As an example, when we remove enough fish from the ocean, jellyfish take over. However, once we stop fishing, the fish don’t return, because the high number of jellyfish have now caused a state-shift in the ecosystem. You can flip an ecosystem from one stable state (fish dominated) into another alternative stable state (jellyfish dominated).

Similarly, human beings house an ecosystem in our own gut, where various bacteria have to figure out how to adapt to their environment, an environment that is in turn created by various other bacteria. Our gut microbiome seems to give rise to various alternative stable states too. Different groups of bacteria work together, to create the kind of conditions under which they can thrive. Other groups of bacteria create other conditions and so the gut microbiome can flip between different relatively stable states.

When you engage in various strange dietary experiments, you’re going to be causing changes to the composition of your gut microbiome. In particular, we see that when you eat a diet high in meat and low in plant foods, you end up favoring the proliferation of various Clostridium species. This is seen in humans too.

As the diversity and health of the human gut microbiome declines, the risk of getting infected increases. However, it’s also a population level problem, it’s not just a matter of your own individual gut health. After all, to be infected, you need to be exposed to someone who carries it. If everyone around you is eating healthy food high in dietary fiber, you’re less likely to be exposed to these bacteria than if everyone around you is on some keto/carnivore/zerocarb fad diet they learned about on social media.

Between 1999 and 2004, deaths from this bacteria increased four-fold in the United States. Between 1999 and 2012, deaths from the bacteria increased from 793, to 7,739 in the United States a tenfold increase. And as I mentioned earlier, in 2015 deaths were estimated at 15,000 people. Some of the increase is due to aging, but most of it has to be caused by other factors. In 2020, the estimate was that this bacteria killed 20,000 Americans.

What are the factors responsible for this? Well Americans have fallen in love with their low-carb high animal protein diets, they think they are becoming obese because they eat grains, which almost every other culture on Earth regularly consumes without suffering real problems. Americans have destroyed their gut health with their fad diets and as a consequence they are now starting to suffer growing deaths from these pathogenic bacteria that are spreading from one person to another. You might not notice the problem yourself if you’re still young, but you’re also spreading these bacteria to people in your own household.

You can’t just say “well if you don’t want to get infected you need to change your diet”, because’it’s not just a matter of individual health, it’s a population-wide problem. Although it can damage your gut at any age, the elderly are at particularly high risk from this bacteria regardless of what they do, as gut microbiome diversity declines with age anyway.

Let’s take a look at one of the main ambassadors of the Carnivore diet, Mikhaila Peterson. Mikhaila only eats beef. In February 2019, she found out she had a Clostridium Difficile infection. She then began eating poop. Yes, she had to take an oral fecal matter transplant, in an attempt to cure her gut health. Of course it didn’t work, because she kept eating this retarded carnivore diet. And in the meantime, her gut that has turned into a proper host for Clostridium Difficile will continue to spread the bacteria to others in her environment.

For an individual, the gut microbiome changes that cause these problems are often reversible. Start eating a lot of dietary fiber (wholegrain bread, plenty of vegetables, etc) and your own gut will tend to recover. However, a lot of people follow American low-carb fad diets and then have children. If the bacteria are very rare in your own gut, you often don’t pass them on to your children. In other words, we’re witnessing a decrease in gut microbial diversity, because Americans simply can’t pass on the right bacteria to their children.

And let’s go back to what I originally told you, the alternative stable state. As Americans descend down their path of trying to be on top of the trophic pyramid, consuming vast amounts of meat that are only affordable to them because they are the world’s richest people who can afford to feed their cattle soybeans imported from Brazil and utilizing a disproportionately large share of our planet’s photosynthetic capacity, they’re going to be causing changes to their gut that are very difficult, if not impossible, to reverse.

So this is essentially what’s happening. Americans want to eat high fat high animal protein diets. These diets work pretty well if your goal is to build a lot of muscle. However, these diets don’t work well to maintain healthy gut microbiomes. Instead, they encourage the spread and evolution of dangerous bacteria that damage your gut and kill people.

Keep in mind, there is always a big delay in these issues. The impact of the rising popularity of Keto and low-carb diets will take decades to reveal its complete impact. It can take years to kill off your healthy gut bacteria and it takes decades before we see the impact of children born to mothers following these fad diets.

I’ll end by ask you a simple question:

I can show you plenty of vegan and vegetarian centenarians. In India, vegetarianism has been widespread for millennia. However, how many centenarians can you show me who only eat meat and who have followed this diet for decades?

The keto diet is a fad diet, that became very popular in 2017. However, it doesn’t really provide people with lasting health, so they are now moving onto the next fad diet, the carnivore diet:

All of these dietary fads have no real history in any human culinary tradition. Your ancestors did not survive off a diet of coconut oil, avocado’s, cheese and pork lard. Your ancestors, whether you like it or not, probably ate most grains. If for whatever reason your body can’t thrive on grain, then that’s just a symptoms that you’re dealing with a deeper problem.

So my recommendation is as following:

Everything that online dipshits parroting each other are telling you is wrong and you can tell that it’s wrong by the very simple fact that your great-grandmother would not have followed any of these fad diets, she ate normal food.

I already know that Americans and culturally Americanized Europeans are not going to figure this out until it’s too late. They’re going to persist in their fad diets. For the first few years, it seems to work well. It’s very easy to build muscle on a high protein diet. Allergies, digestion problems seem to go down, because your body is exposed to less nutritional diversity, with less things that can upset your gut. However, just as walking less is not a solution to sore legs, eating less diverse food is not a solution to gut problems: The less you ask of your body, the less it’s going to give.