Sometimes it helps me to process my thoughts by typing them out. I have roughly one unpublished draft for every published essay. I understand that for most of my readers this is not very interesting, so I wish to apologize in advance, I will soon return to discussing other subjects. It’s primarily meant for a few who know me personally, who will encounter this. I have recently been thinking about what makes me so hesitant and fearful of relationships. It seems that I have a cynical and pessimistic perspective on them. This is mostly due to negative and hurtful interactions in the past.

I think there’s a fair case to be made that my most recent relationship has been abusive in nature. I was subjected to gaslighting and negligence of my feelings and needs. Gaslighting in particular is a very damaging phenomenon. If you witness A and communicate to another person that you witnessed A, who will insist to you that A never happened or that what you witnessed was actually B all along, then you begin to mistrust your own judgement. This begins subtly, but it gradually escalates until you end up putting up with behavior that everyone else would recognize as abusive.

Sometimes you encounter a person who enters into a string of relationships, but every person they enter into a relationship with appears to be gradually consumed and they are left exhausted and depressed afterwards. I have known such a person and unfortunately after a long period of talking to her I eventually gave into this person, against my own better judgement and my initial gut feeling upon first meeting her that something seemed “off” about her. It is essentially what Edgar Munch depicts in the dance of life: 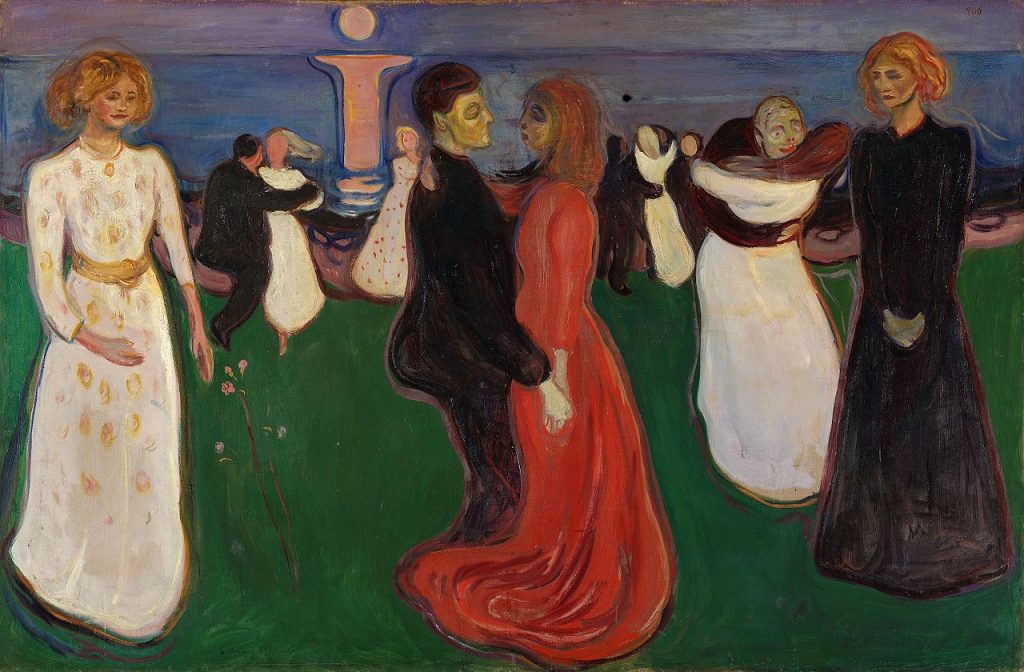 You see a good looking young woman in white, representing innocence. She dances with a man, who gradually starts to look sickly and ghoulish. Eventually we see the same woman, but now we see her in black. She is mourning the man she has consumed. There’s a mistaken conception in our culture that only men can be abusive in relationships. In reality, women simply tend to be better at concealing their abuse. Consider, who would have believed Johnny Depp if he hadn’t made recordings of his ex admitting her abusive behavior towards him?

There is also a Dutch movie that depicts this phenomenon, the Fourth man. It is a movie about a mysterious woman who has been married three times, but all her husbands have died. The protagonist falls in love with her when she is in a relationship with another man, but realizes something is off about her. Eventually this other man falls victim to a horrific accident and the protagonist himself is hospitalized, but he is treated as insane when he tries to warn people that this woman is malignant. It has long been a favorite movie of mine.

An important thing to consider is that love of this nature is not genuine and authentic, it is parasitic. A person of this nature is generally perfectly capable of reshaping their personality to fit yours, their interests will seem to mirror yours. The reason for that is generally because they grew up with a parent of the opposite sex, who seemed abusive or indifferent towards them. To win affection, they had to adopt their parent’s interests and opinions. As a result they never developed a stable identity of their own and went through life adjusting themselves like a chameleon towards those whose affection they hoped to win. What you loved, was an empty mold.

When I take psychedelics, particularly mushrooms, I sometimes have a particular fear enter my subconscious. That fear is a vision of being consumed by a spider. I never gave this much conscious thought, I saw it as a sign that I was excessively taking psychedelics and a way of being told to hang up the phone. However, in hindsight, I now understand what the purpose of this recurring vision is. For all practical purposes, I have had my self-esteem, happiness and years of my life consumed by the equivalent of a black widow. I know that other people suffered the same consequences from this woman, which validates my own subjective experience.

People are rarely genuinely evil. Instead they grow up in an unstable and uncaring environment, which leads them to grow up to become adults who pass on the injuries they had inflicted on them. This is one of the main reasons I have always been very skeptical about our government’s willingness to integrate refugees from foreign countries. People who have grown up under abusive conditions end up viewing the world through the lense of the circumstances they grew up in, so they bring that mentality with them. When you migrate from hell to heaven you don’t find yourself thinking “Hurray I’ve made it”. Rather, you find yourself thinking “What hidden pitfalls am I missing?”.

Personally I have grown up in relative poverty, to parents who were unemployed throughout most of my youth. That instability similarly creates a lense through which I view the world that is almost impossible to abandon. Whereas most people feel capable of having trust in society to take care of them, I almost inevitably find myself feeling fundamentally distrusting towards society.

It’s common for people who have been mistreated to resign themselves to their situation and to become deeply mistrustful of others. It’s also very common for people to be in denial about it, because it doesn’t fit within the kind of narrative you wish to write about yourself. Few people want to think of themselves as vulnerable, let alone damaged. However, without acknowledging it you make it impossible for yourself to recover from it.

There’s a rational motive I have had to avoid relationships. Abusive people tend to recognize what sort of people are susceptible to putting up with being mistreated and zoom in on them. As a consequence, if you don’t fix what makes you susceptible, then you’re likely to find yourself harmed again.

The problem I face is that it is almost impossible for me to explain this situation to other people. The idea that men can suffer from an abusive relationship is impossible for most people to conceive. In addition, people who have not gone through the experience do not comprehend what sort of harm gaslighting does to your psyche.

I believe however that it’s possible to recover from the harm. Some people are naturally cognitively flexible, others need to take more effort for it. Me in particular, I can easily find myself stuck. For all practical purposes, I am currently engaged in the process of rebuilding my brain. I take supplements like vitamin B12, cannabidiol and N-acetyl cysteine, that allow my hippocampus to regenerate itself. As a consequence, my brain will be capable of pursuing new experiences and creating new memories, rather than continuing to be harmed by memories of the past.

Human beings have a cardiovascular system that we need to make use of, if we want it to keep functioning properly. You can look at indigenous tribes that spend their whole life running and you’ll find that their cardiovascular system doesn’t really age significantly. Running is the most important form of exercise, swimming is a close second. It’s exactly what our bodies were designed to do, by the process of evolution. Our brain also happens to massively benefit from this.

One problem I’ve always had is motivating myself to run. I’m always glad that I went after I ran a few miles, but the struggle lies in getting myself to that point. After running a sufficient amount of time, your body starts releasing all sorts of neurotransmitters that serve to make it possible for you to keep running. Endorphins kill the pain that occurs in your legs as tiny fractures emerge in your bones. Endocannabinoids are released that serve to relax your blood vessels and help you feel comfortable in your own body.

It takes a while for this process to happen. Once it kicks in while you’re running, you are for all practical purposes “high”. I’ve smoked cannabis and I’ve spent time jogging. I’m not particularly good at jogging, I get less exercise than I should, but after a bit of training I became capable of running long enough to experience “runner’s high”. It feels essentially the same as smoking weed. It’s hard to reliably trigger it, it seems to require you to go beyond what your body can comfortably handle.

I am confident that taking good care of myself will allow me to recover from the harm I had inflicted on me.  As a consequence I will gradually become capable of putting trust in other people again and finding joy in new activities and experiences. It’s an old cliche, but when you allow yourself to succumb to injuries you had inflicted on you, you grant your enemies a victory. And, to end on a happy note, I’ll leave you with my favorite song of the moment: