Below you can see some photos of two Salvia Divinorum cuttings I bought from someone. It was hard to source them and it was a struggle to transport them, but as you can see, they’re doing pretty well. I’m one of a handful of people in the Netherlands who grow Salvia Divinorum. I’m surprised by the speed at which these plants grow. The cuttings are said to be the Blosser strain, a strain that’s known to be more palatable than the popular Hoffman Wasson strain.

Here you can see a photo of my plants from April the 23rd, just after I first brought them home: 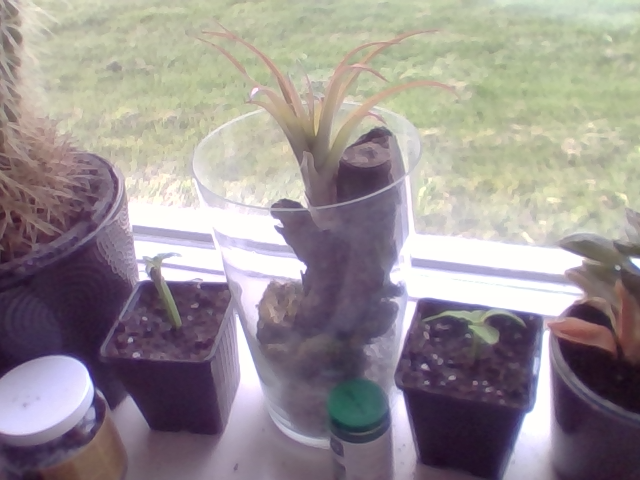 The quality of the photograph is disappointing (sorry about that), but it’s clear that the cutting on the left has barely any leaf. The plant in the middle is an epiphyte grown for decorative purposes, in case you’re wondering. This photo is from April 29th: 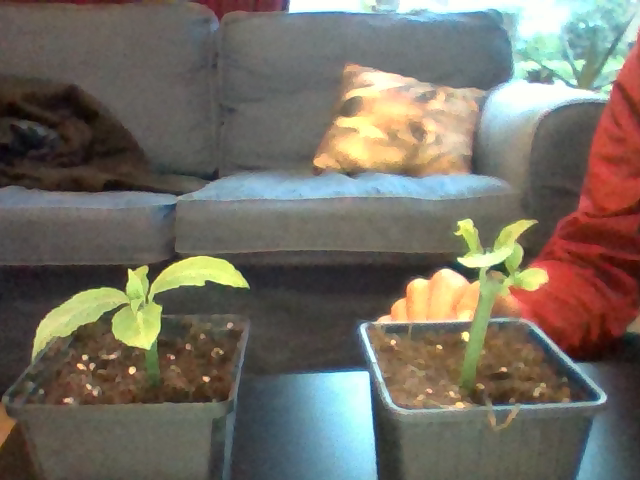 The cuttings are shown here in opposite position, but it’s clear that both plants have grown. Around this time,  the local weather was very sunny and the sky was free of clouds. When Salvia cuttings are young, they’re rather vulnerable to suffering damage from direct sunlight.

The last photos, much higher quality, were taken on may the 19th. It’s clear the plants have grown well, in fact, they would almost be ready to have cuttings taken, that can be used to produce more plants. The leaves by now are also large enough to harvest. 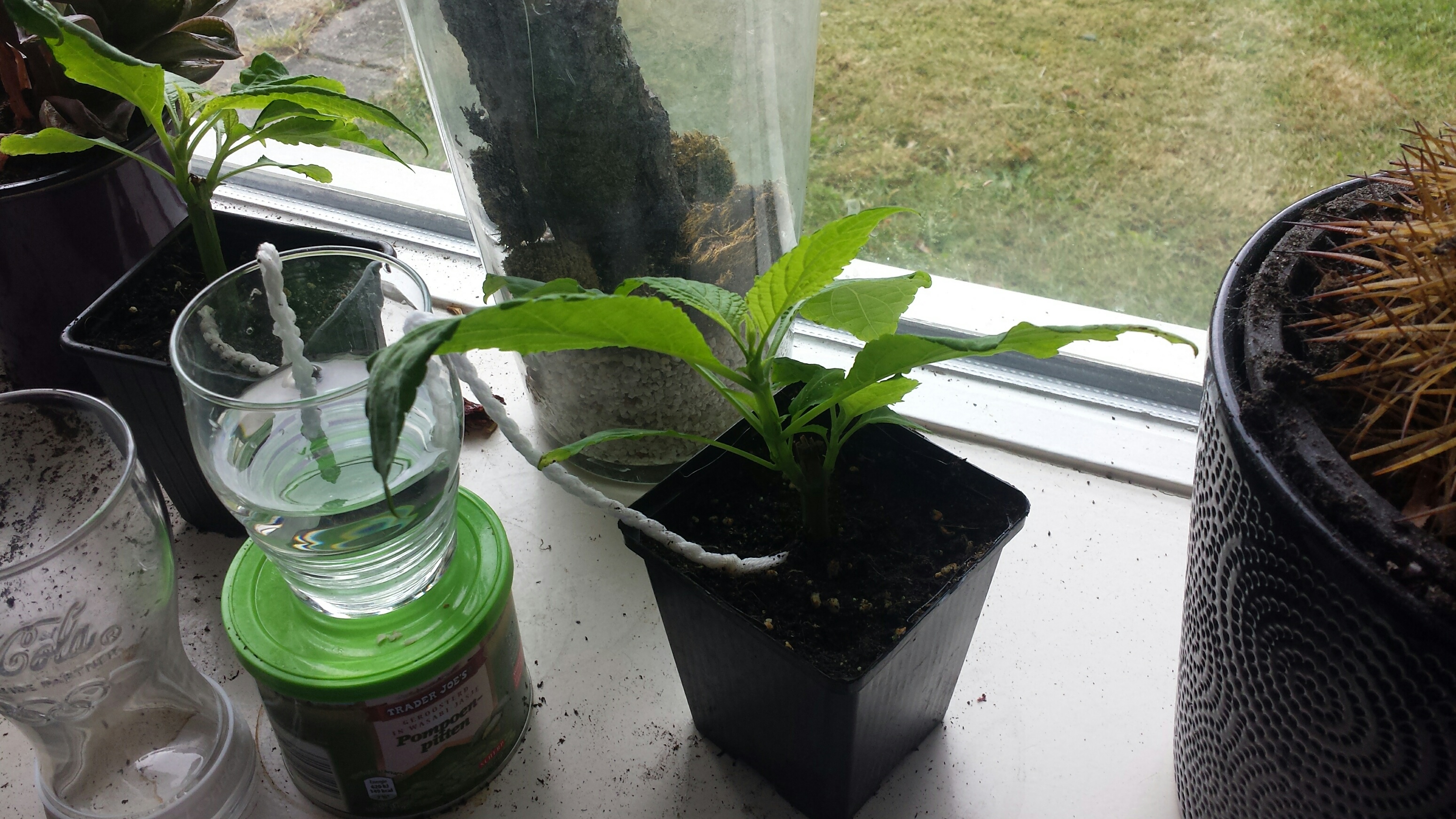 The ropes are a system I use to water the plants through drip irrigation, when I’m away from home for a few days. I generally don’t leave the cuttings unattended for more than 60 hours at a time.

The sun damage suffered by one of the cuttings can be seen in the image below: 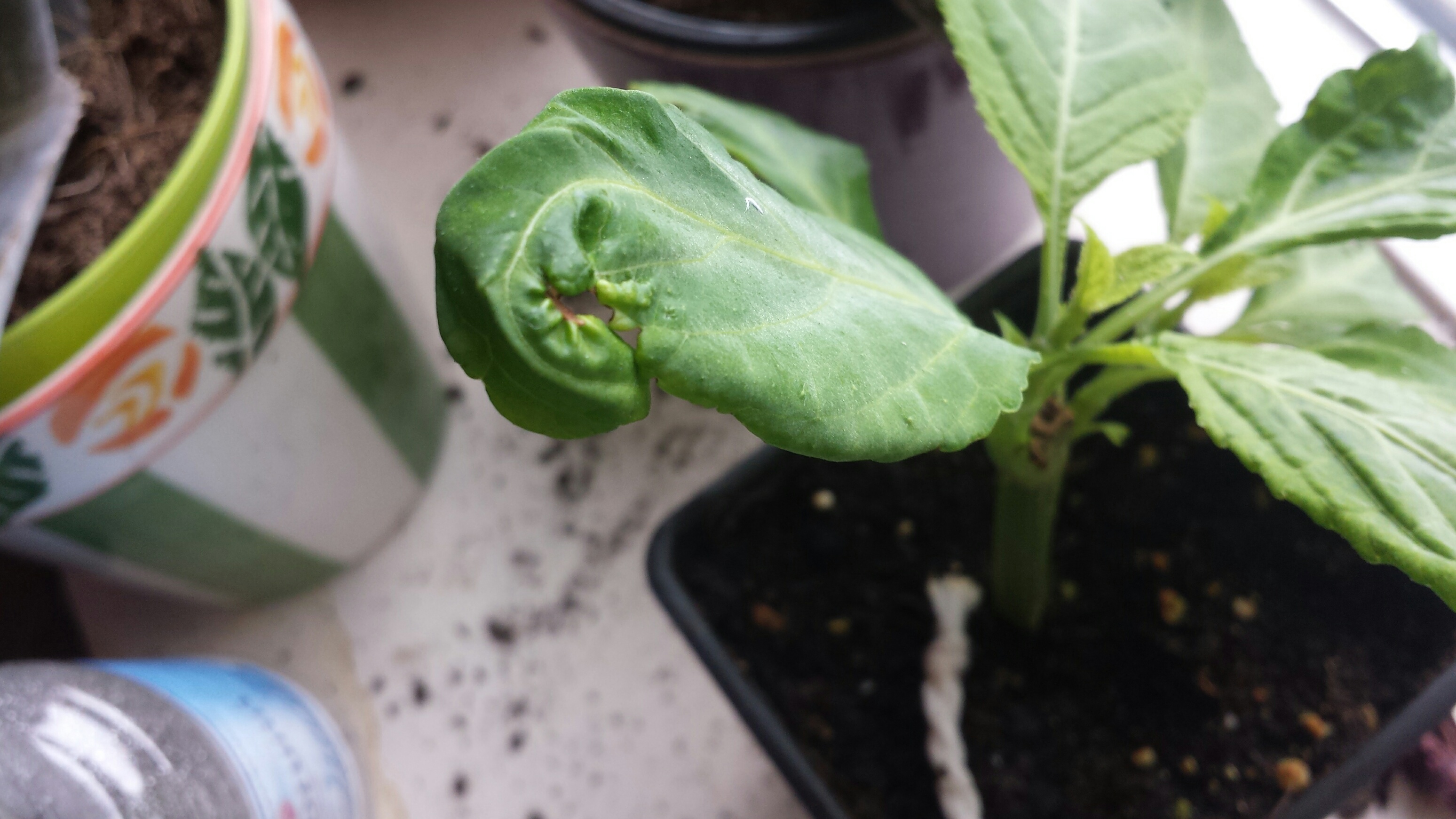 The plants grow in the Netherlands, behind double glass, with a tree in the vicinity that helps protect them from excessive direct sunlight. The soil is kept moist through multiple means. The plants are misted daily, unless I’m away from home. They’re watered once or twice a week and receive drip irrigation to keep the soil from fully drying out, something Salvia Divinorum genuinely doesn’t enjoy.

The first choice I’m faced with now is whether I wish to take cuttings from these plants, or whether I wish to repot them. I’m somewhat afraid of transplanting them into a bigger pot, as it’s easy to damage a plant in such a manner. In the long run however, it’ll be necessary.

As mentioned before, I have the (admittedly) highly ambitious plan to get my Salvia Divinorum to set seed. The odds are said to be dramatically against me, but I have seen the argument proposed that most people don’t use the proper techniques to maximize the chances of successful seed production. As an example, Salvia Divinorum is very susceptible to light pollution during the night while flowering. Any light exposure at night leads her to abort flower production. Fortunately, I have a big dark closet room in my house, where I could effectively protect the plant against light exposure.

Another argument I have seen suggested is that the plant is self-incompatible, a common phenomenon in plants that encourages genetic diversity. There are different solutions that could be explored to this problem. Salvia Divinorum has different strains, that differ genetically from each other. Fertility between different strains might be increased, by avoiding self-incompatibility.

Alternatively, it may be possible to hybridize Salvia Divinorum, with other plants in the genus. Opinions differ on the proper genetic classification of Salvia Divinorum, but according to recent genetic research the plant most closely related to her is said to be S. venulosa. For me, it’s not possible to acquire Salvia Venulosa at this point in time, I have no clue how I would have to go about that.

Another possibility worth exploring is whether Salvia Divinorum’s fertility can be enhanced by grafting the plant onto another plant. The as of yet undiscovered flowering hormone in plants, is produced by leaves and transported to the shoot apical meristem of buds and growing tips, where it promotes flowering. The flowering hormone is known to be graft-transmissible.  Grafting a poorly fertile plant onto a fertile plant might hypothetically increase fertility. To me, Salvia Splendens appears as a potential candidate to graft Salvia Divinorum onto.

For now my project is on schedule. Any ideas that are conducive to my aspiration to produce Salvia Divinorum seeds are welcome. If anyone has any idea how to go about acquiring Salvia Venulosa, I’m all ears too.