There are few things out there that make me sadder than to see a teenager wearing a mask outside. If I see a child wearing a mask, the parents are sick. Kids are extremely psychologically resilient, I expect most will get over this sordid episode. On the other hand, when a teenager wears a mask, the teenager has internalized the sickness. That hurts me. You’re young. You’re supposed to be reckless and rebellious. God is an old man with a beard, but Lucifer is a handsome young teenage boy. Here’s what youth is supposed to look like:

Hanging out with your mates, or hanging on to your mates for dear life, to avoid dropping onto the floor teeth-first after mixing all sorts of things in your body that are not supposed to be mixed. That’s the height of existence for the 99% of us who don’t end up getting to rule the world like puppets on a string. If you’re David Rockefeller, Warren Buffett or Henry Kissinger life peaks in your nineties I guess, but for the rest of us, life generally peaks in our early twenties.

Old people tend to insist “it’s just a year of your life” that they stole(!) from you, but they’re unwilling to admit to themselves how mediocre those old years they’re clinging onto tend to be. Some of you will be bald or have baggy eyelids before you’re thirty, others of you will have to work as Walmart greeters for the rest of your lives. Most people don’t face a glorious future, but while you’re young, you’re all still basically equal. Sure, some have noble titles and trust funds, but in most youth subcultures you’re embarassed about that.

Unfortunately, for some reason it became hip and prestigious in recent years to be a boring nerd. I would hang out with women in their early twenties and they would talk about the boring stuff they have to do in lab for college, as if anyone genuinely cares about that. If you’re in your twenties there’s still plenty of time left to start identifying with your job, try waiting with that until you hit your fifties.

I blame Twitter, which has a weird mix of narcissistic power-hungry academics and young wokies, two demographics that really shouldn’t mix. That mixture helped give birth to the phenomenon of Big Woke: The modern tendency of universities with billion dollar endowments and Fortune 500 companies to push the value orientation of the authoritarian left.

Youth culture reached its peak in the 1980’s with the birth of Punk and Goth, but it has been steadily downhill since then, as parents began to whine more and more to their kids about the need to get better grades to get into college, as part of a zero-sum game of competition for the last few prestigious jobs that haven’t been automated out of existence yet.

I’m thirty, I’m not going to dress up like a vampire anymore and I’m not planning on any face tattoos either, but I very much hope that this is something the elderly don’t manage to kill off. What you always need to remember is that scientists are not a demographic of people who somehow have access to an objective indisputable truth about how we need to live our lives. Scientists are people who spent the best years of their lives reading books under artificial lights without getting paid for it, while the rest of us were at a concert somewhere high on a mixture of codeine, alcohol, cannabis and MDMA.

This is what I have been waiting for people to figure out for over a year now. And I’m glad to say, that people are finally starting to get it. Instead of licking Big Woke’s technocratic authoritarian boot, punks are finally once again starting to behave like… punks. In New York city they recently held a hardcore concert by applying for a political protest permit. Apparently, they referred to it as “The Superspreader Bowl of Hardcore.” That’s exactly the mentality we need.

Please remember at all times: Fuck the system means fuck the system, it really doesn’t matter whether the system is run by middle-aged white men in three piece suits with countryside mansions or by unelected pink-haired nerds with Phd’s who wear cat urine deodorant, live in tiny apartments in metropolitan cities and put their pronouns in their Twitter biography.

It’s not just that I don’t believe you because of your terrible track record. The fact of the matter is that I fundamentally don’t care what your scientific model says is going to happen when I leave my house, have my friends over or refuse to use cat urine dispensers to disinfect my hands when I go to the supermarket.

If I’m honest, the only thing I really truly strongly believe in is the right for young people to a happy youth. That’s what I genuinely value. Everything else I believe in is ultimately a working hypothesis. This is also exactly why the lockdowns happen to disturb me so much. It is the latest episode of the elderly burdening the young with their problems. The elderly leave the young with an annihilated planet, they force you to spend your youth worrying over whether you’ll get good grades and then eventually they lock you up in your house because you might spread a virus that their defective immune systems can’t handle.

Back when I was a child, people were convinced that I was “gifted” and so I had a normal childhood robbed from me. I would show up late for birthday parties during weekends because I had to be shipped to nerd-class first. Rather than being taught how to get along with other people, I was de facto taught to feel superior to them. Parents genuinely manage to convince themselves that their kid is miserable because he’s too smart for his schoolwork and so the cure is to give the kid extra work.

My suggestion to all children would have to be to pretend that you’re retarded: That’s the only way to get adults to leave you alone. If they find out you’re not retarded, they’re going to try to turn you into a college professor to soothe their own egos. I dropped out of college and my mother considered it the end of the world, but I bought Bitcoins, cashed out and will never have to work a day in my life again if I don’t want to. The kids I know who graduated college can’t buy houses and still live with their parents. When you do everything the way you’re supposed to do it, you’ll end up as the perfect slave.

To be a punk means to rebel against the values of your parents generation. It means to live in the here and now, to decide for yourself what’s important to you and to realize that what elderly people consider to be the meaning of life has no sort of objective higher truth to it: It is simply their arbitrary value judgement and they have no way of demonstrating that their value orientation is superior to yours. 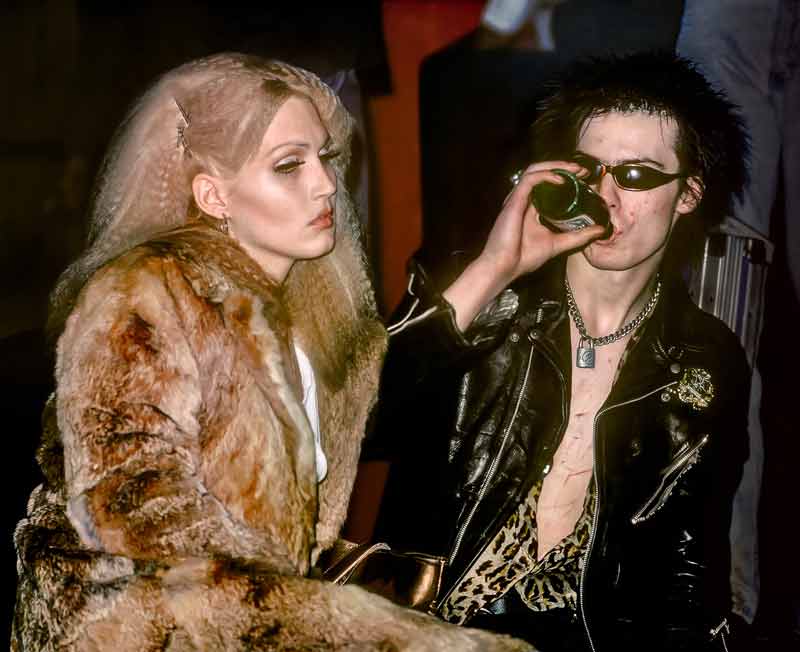 In contrast to the ideals of the hippies and the new left of the 1960’s, punks didn’t try to replace the old order with a new order of their own. Punks were against everything. That’s why we need punk now more than ever before. Jewish punks like Nancy Spungen would walk around dressed with swastika’s on their clothing, to offend the bourgeoisie and their parents generation. It was their way of showing: What means something to you doesn’t have to mean the same thing to us. We won’t just let you turn us into copies of yourself, that will live out your passions and traumas when you have died of old age.

Old people tend to turn into snobs, who spend their days trying to prove to themselves that they have noble ancestors, as they listen to classical music and fill their homes with paintings of old dead aristocrats who only had their portraits painted because it allowed them to show off to their peers how important they were.

If you’re young, you really shouldn’t be wasting your time asking yourself whether the infection fatality ratio is 0.15% or 1%, how long T-cell mediated immunity lasts, whether herd immunity kicks in at 60% or 90%, whether the British variant is deadlier than the original variant, whether COVID deaths had two years or ten years of life expectancy left, or any of that stuff. The correct response is to forget that any of this stuff even exists. When you argue with these people they still won.

Leave that crap to old people to nitpick over, they can debate among themselves whether it’s safe enough again for them to stare at paintings of long dead people they imagine to be their ancestors. It doesn’t matter. What matters is that you (hopefully) want to hang out with your friends and have a normal youth. The boomers held Woodstock in the middle of a pandemic. You deserve everything they had and more, because they screwed you over.

When the boomers get angry at you because they caught you slurping boogers out of your friend’s nose, you should offer them a deal: I’ll lock myself up in my bathtub with a cork up my anus, if you’ll reduce the concentration of carbon dioxide in the atmosphere back to what it was when you were born.