I love the riot that took place in Rotterdam, for a number of reasons. To start with, it slows down the inevitable gentrification of Rotterdam. Rotterdam has been a blue collar city for generations, where bottom of the barrel white trash descended from Catholic day laborers like yours sincerely had to figure out a way to co-exist with later generations of labor migrants imported from Muslim nations.

These days however, the government no longer bothers to build enough houses for everyone, so prices go up and bourgeois cosmopolitan types move into Rotterdam, while indigenous white trash like me have to move to other towns if we don’t want to dwell in our childhood bedrooms for the rest of our lives. There’s nothing that quite tells the 90IQ 90k college debt generation “you’re not welcome here” as a burning police car, is there?

Maybe this comes as a shock, but Rotterdam is a working class city and we’re not really looking forward to gentrification, particularly when it means that the locals can spend until their mid thirties dwelling in their childhood bedrooms, spending their days waiting tables for Americans who read on Lonelyplanet that this is the coolest city in the country (it’s not, we’re extremely uncool, go to Amsterdam please).

These riots are simply another step towards the long-term outcome of this brewing conflict: Class warfare between young working class people and the lackeys for the technocracy, who think they’re going to exterminate a virus by imprisoning us all in our homes and moving us into virtual reality, which they rebranded as the “metaverse”. 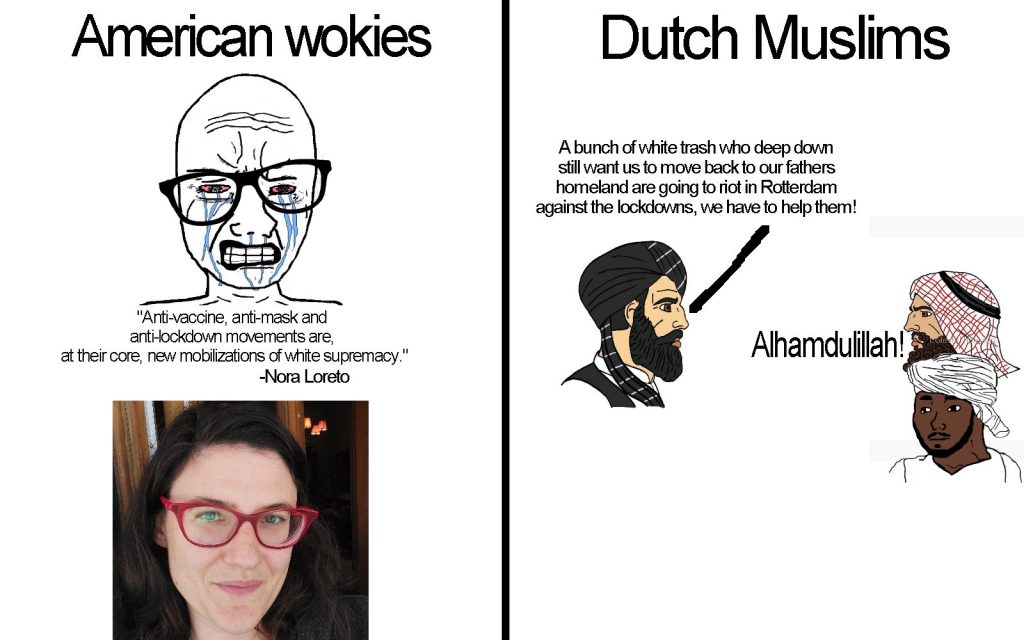 The grand irony perhaps is that wokies have now finally accomplished what they had always hoped for: They figured out a way to get Dutch Muslims and Dutch white trash to respect each other and co-exist in harmony. Geert Wilders, who represents the interests of Dutch white trash, has spent about two decades now, blaming Muslims for every single problem under the sun that affects white trash.

If houses are too expensive, it’s because of Muslims. If you feel unsafe leaving your home, it’s because of Muslims. And Dutch white trash eagerly went along with this, because if they’re allowed to complain about Muslims, it feels like they’re allowed to complain about being turned into an ethnic minority in their own neighborhoods in their own ancestral homeland. Geert even went so far as to blame the coronavirus on Muslims who continue going to the mosque.

But now we’ve seen the resolution of this whole experiment: Class consciousness. We’ve reached the point where indigenous Dutch white trash and Dutch Muslims recognize they now have more in common than what divides them. If you ignore the elderly for a moment, then it’s clear that we have two social classes in this conflict: There are those who belong to the working class. They do something that genuinely contributes to society and they’re not very eager to be vaccinated against a virus that doesn’t affect them.

On the other hand, there are those who belong to the laptop class: The lackeys of the technocracy. The technocracy thinks it can control the spread of a respiratory virus and seems to see itself as uniquely endowed with this obligation, by gradually moving us all into a metaverse type future, where we put on our goggles and get entertained to death in our ten square meter one room apartments, stacked on top of each other in some big coastal metropolitan city.

Fundamentally, you need to understand these people as products and agents of the demiurge. That’s not a rational explanation, it’s a mystical explanation, but humans have used mysticism for generations to understand how the world works. All religious mythology tells us that God created a man and a woman. In some myths however, there was a lower machine type creature, that turned us from spiritual beings into creatures, trapped in matter.

If you look at wokies, you’ll find they look like their boss, the demiurge. In the original tales from Timaeus, the demiurge doesn’t hate humans. Rather, the demiurge is benevolent, but can’t really understand how humans operate, because it doesn’t have a soul of its own. The demiurg has no emotions, no qualia.

It’s a genderless AI-type entity that just tries to apply reason, to build the best possible world. Because of this the demiurge always ends up trapping us in some sort of complex technological realm where all our material needs are taken care of, but we end up isolated from God.

In wokies, you’ll find the same symptoms. These creatures are extremely eager to get you to acknowledge their supposed lack of gender. Why are they so eager to push this stuff? Because whatever you feed grows. They serve this demiurge inside their own heads, this machine type entity that thinks this modern world of concrete brutalist skycrapers, dating apps and service desk jobs is beautiful because it is efficient. It’s a perfect world for people without souls. The outcome is that they start to physically resemble their father.

The other symptom you’ll notice is that wokies are extremely terrified of nature, whenever they realize that they don’t control it. This is the only lens through which you can understand this fear of climate change. They don’t fear the destruction of nature. No, they fear the prospect of nature escaping their control.

That’s also why they seem to go insane in regards to this virus. This virus is a product of an attempt to force nature into submission. They engaged in some grand project to try to figure out how to stop corona viruses from jumping species, only to end up producing one that jumped into our species in the process. You’re never going to get an official confirmation, but it should be beyond obvious: This is nature’s grand humiliation of the technocracy. Nature doesn’t “take revenge”. She just doesn’t stop us when we decide to play with fire.

The woke technocracy however decides to double down: They suddenly become more pro-life than an Irish American politician looking for an endorsement from a cardinal. Every single last nursing home resident who dies of COVID becomes a tragedy to them. Why? Not because they care about people, but because it is a humiliation they suffer from nature. They want to reign in their humiliation.

The difference between the working class and the blue-haired agender lackeys of the technocracy is that the working class has a certain degree of fatalism. Muslims in particular accept that certain things are just meant to be under the control of God and we shouldn’t seek to micromanage every single aspect of life. That’s why it has proved practically impossible to get them to sign up for this vaccine.

If you ever feel down, I recommend you to remember the punishment these people face: Eternal humiliation in the annals of history. Do you really think anyone is going to look back positively on Fauci, or on Daszak, ten or twenty years from now? This is genuinely the best possible outcome to the human predicament, we live in the best of all possible worlds.

They attempt to play God through gain of function experiments. The whole thing goes wrong, some Cambodian abomination escapes the lab and begins to spread. The incompetent communist regime attempts to cover it up, giving it enough time to spread into third world countries. This represents the final indictment of Chinese communism. Then finally, the Western technocrats who realized about three months late that this abomination was designed in a lab (again, what are we paying these people for?) panic and attempt to eradicate it, only to fail dramatically.

Anyone who looks at the state of the world today realizes the good days are behind us. We can all see the writing on the wall: This baby is going to crash and burn. The oceans are fished empty, the forests are burning down, the oil is gone, the mountains are strip-mined and our soils are blowing into the ocean, as we went from two billion to seven billion people in a century. The global hangover is coming and it’s going to hurt, there’s no way around it. This whole system we live in was inevitably going to collapse under its own weight, all it ever needed was a little push.

So what better end to this show, than the final humiliation of the people who think they can manage this mess? Watch as they crash the global economy, in an attempt to weed out a virus with a 99.7% survival rate, because they can’t accept the fact that their decades of scientific research culminated in the very disaster they had told themselves they were going to prevent. This is what these people based their egos on: They are the saviors of mankind, who stop pandemics before they take place. And now they have to watch, as everything that made them proud begins to invert. What more could you ask for?