If you want to understand COVID-19, as mentioned earlier you need to follow Alex Berenson on Twitter, watch this link, check out /r/COVID19 every once in a while and obviously, follow yours sincerely. Today we’re going to look at an awkward case study. Imagine the following: People start dying of COVID-19. You shut down your whole nation, forcing people to stay inside their homes. Then the deaths start plunging, but unfortunately they start plunging so rapidly that it’s implausible for the lockdown measures to be responsible for the decline in deaths.

Imagine such a thing happened. That would be awkward obviously, but it would also give us some insight into how deadly this virus really is. Well, have I got some news for you! The Spanish government publishes statistics of the number of deaths in different regions of the country, compared to the number of deaths you would typically expect for the time of the year. If you scroll down to page 13, you will see the world’s most awkward graph: 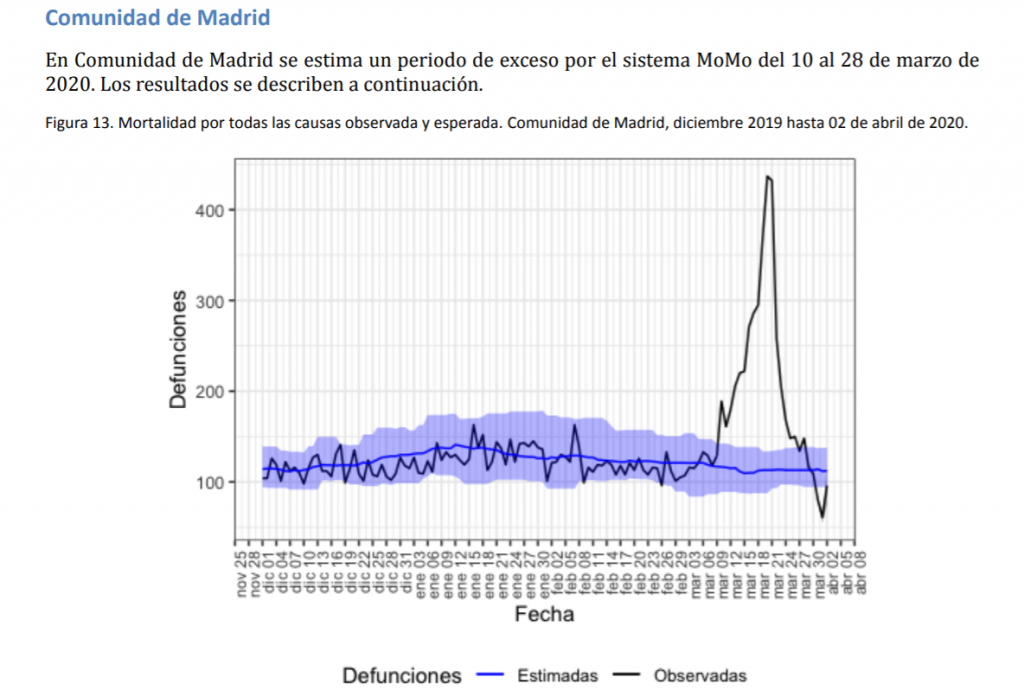 What’s this? This is the number of deaths observed in Madrid, of all causes. That blue line is what you would expect to see normally, that black line is the number of actual deaths. There’s a clear spike there, due to the coronavirus. However, that spike nearly immediately shoots down again. How is that possible?

Well, to explain that, we first have to consider the measures that were taken. Madrid, when faced with an increase in deaths, implemented lockdown measures, in an effort to reduce transmission of the virus. What’s the earliest moment any measures were implemented? Spain implemented a nationwide lockdown, on March 14.

When you implement a lockdown, you try to prevent people from entering into contact with each other, to avoid other people becoming infected. However, the impact this has on deaths is delayed. After contact, it takes a few days before you develop symptoms. After developing symptoms, it takes a few weeks, until you die. On average, it takes five days between exposure and the development of symptoms. When you have symptoms, it takes two to eight weeks, until you die from them. So, how long until a decline in infections should lead to a decline in deaths? Some people will start showing symptoms relatively early. Let’s be generous and say that it takes one two weeks for the first infected people to die. Where would that mean an impact of the lockdown on the deaths becomes visible? 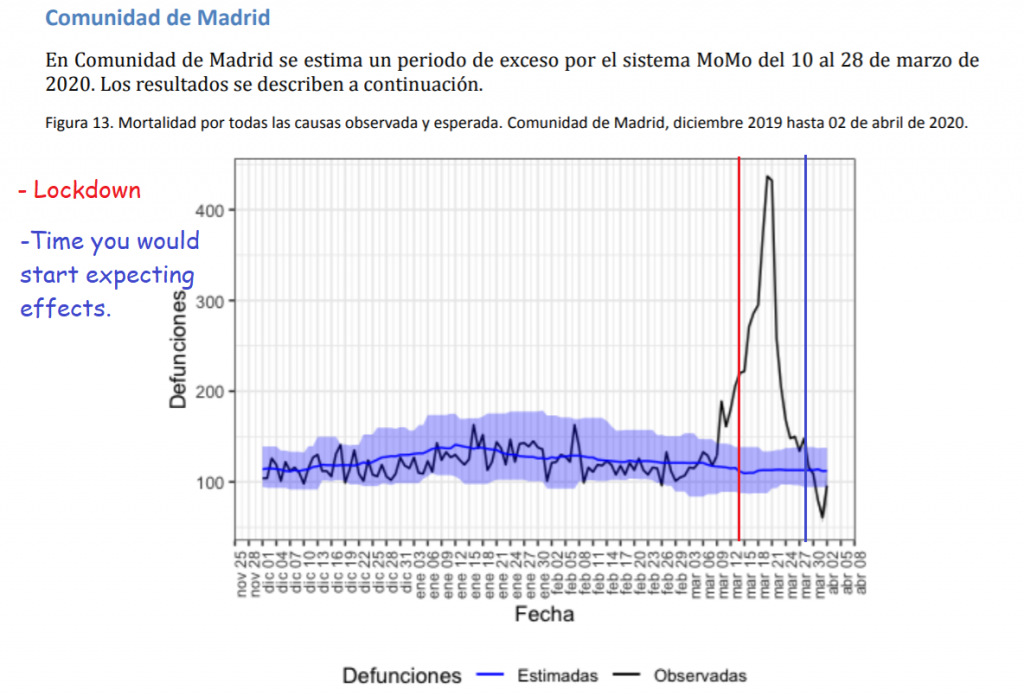 So, in the above crudely photoshopped graph, you can see where the lockdown was implemented and where you might expect to start seeing some sort of impact from the lockdown. Keep in mind, you don’t expect a sudden plunge in deaths from the lockdown! People in lockdown still spread the virus in their own household and they will still spread it in the supermarket. What you would expect from a lockdown, is the infamous “flattened curve”, but we don’t see a curve here, we see a peak followed by a crash, well before the lockdown measures would be expected to have any effect.

So, what’s the alternative explanation? The alternative explanation is: Madrid has already reached herd immunity. By the time they implemented the lockdown measures, almost everyone already had the virus. I really can’t think of another explanation here, for this sudden absence of deaths. You could argue that some deaths are delayed in recording and should have been on this graph, but that delay wouldn’t last this long and lead to this kind of plunge in deaths.

The Coronavirus is increasingly thought of as a virus that spreads extremely rapidly, but is not very deadly. If we assume Madrid has reached herd immunity, we can come up with a mortality rate for the virus. It’s thought that 60% of the population needs to be infected, to reach herd immunity. According to the latest figures, the community of Madrid has 6,661,949 people. Sixty percent of that, is four million people.

The page cited earlier shows us how much the excess mortality in Madrid has been, compared to what you would expect. That number is 2332 people. 1930 of them are at least 75 years old. So, we divide 2332 by 4 million, to arrive at an infection fatality rate of 0.0583%. Is this estimate abnormally low? Not really, consider what the Oxford Center for Evidence Based Medicine says about Iceland:

Iceland has tested a higher proportion of people than any other country (9,768 individuals), equivalent to 26,762 per million inhabitants the highest in the world (as a comparison, South Korea has tested 6,343 individuals).

Screening suggests 0.5% are infected; the correct figure is likely higher due to asymptomatics and many not seeking testing: estimates suggest the real number infected is 1%.

Iceland, currently reports two deaths in 963 patients, CFR. 0.21%. If 1% of the population (364,000) is infected, then the corresponding IFR would be 0.05%. However, they have limited infections in the elderly as their test and quarantine measures have seemingly shielded this group, and the deaths will lag by about two weeks after the infection.

Iceland’s higher rates of testing, the smaller population, and their ability to ascertain all those with Sars-CoV-2 means they can obtain. an accurate estimate of the CFR and the IFR during the pandemic (most countries will only be able to do this after the pandemic). Current data from Iceland suggests their IFR is somewhere between 0.01% and 0.19%.

Since then, the deaths in Iceland have increased by two, however, their total number of infections will have gone up too. In other words, the estimate given here for Iceland, fits the range of my own estimate for Madrid. My estimate also fits the Wuhan IFR, if you consider that Wuhan was the epicenter of the epidemic and the virus has become less lethal since then.

Of course these deaths don’t tell you the whole story. You want to know how many years of life the victims lost. The average age of death of most victims in Europe is around eighty. According to Ferguson, two third of deaths would have died within this year, even without this virus. This estimate by Ferguson fits our observed data: After the excess mortality peak, we see the deaths in Madrid plunge beneath the expected number of deaths.

The weather is nice, so go outside, take a breathe of fresh air. Stop listening to politicians and the media, they want you to be afraid. Approval ratings for politicians have skyrocketed due to this crisis, while the media earns money by keeping you afraid.

Buy some Italian and Spanish stocks. If you’re really gutsy, buy call options that expire about half a year from now. You can thank me later.

Unfortunately, I need to make one disclaimer here. I’m pretty confident in my predictions, when it comes to Europeans and East Asians. We’ve seen the epidemic run its course here, we know how it unfolds, we have a reasonably good clue of its infection fatality rate.

Unfortunately, I think there are two exceptions that may turn out to be worse than you would expect based on my observed data: Indigenous Americans and obese populations. Indigenous Americans have lived for thousands of years, without exposure to the animal herds from which people in the old world caught viruses. Almost every pandemic seems to have a worse impact on them. I expect that the fatality rate may turn out to be much higher among them.

The other exception, are obese people. Ninety percent of people on the Dutch intensive care for this virus, are overweight or obese. If you’re fat enough to have breathing problems during regular activities, this virus can push you over the edge.

I can’t confidently rule out that these two populations might see a severe impact, but I suspect that the weather will make the impact relatively limited. The weather in most places is becoming warmer now and most indigenous Americans in South America live in places with warm temperatures and high humidity, where coronaviruses don’t seem to spread very easily.

For India and Africa, I expect an outcome roughly similar to what I expect for Europe (0.05% infection fatality rate). Keep in mind,  the only way to protect Indigenous Americans from this virus, is to take a realistic look at the virus: If Europeans and Americans think doomsday is coming, they will hoard resources that would be much better used helping Indigenous Americans prepare for the virus.