In the old days, being part of the radical left meant that you would be enthusiastic when you witnessed a crowd of working class people with nothing left to lose storming the centre of power as politicians cower in fear. Today it means you smear them as fascists and white supremacists.

In the summer of 2020, when political violence was normalized by politicians and the media, the cost was carried by working class Americans. Now that it blows up in their faces, they suddenly act shocked. I think that’s hypocrisy.

Here are some proper leftist reactions to working class Americans storming the fortress of their ruling class:

Protip for every angry white male: People with names that end like *Stein and *Berg are actually remarkably sympathetic towards you, if you bother to keep in mind that the media are smearing you as neo-nazi white supremacists.

If you peddle antisemitic theories, you’ll simply alienate yourself from the vast majority of the population. You’ll be a fringe cult within society similar to flat earthers that never gets anywhere and your great-grandchildren will piss in a bottle, working as indentured servants on Mars in cyber-Jeff Bezos’ Amazon warehouse.

There’s a small fringe of really angry white males, who try to convince other angry white males that everything bad that ever happened to angry white men since they evolved opposable thumbs is actually the fault of the Jews. These tend to be unemployed people who have ridiculous amounts of free time and thus their voices end up overrepresented in echoboxes where angry white men tend to gather, like thedonald.win. This tends to be the case for the Internet in general. The content you consume is produced by insane people.

Unfortunately, because Uncle Bob will simply get banned on the average social media forum for questioning the vaccine or supporting Trump, he ends up using alternative platforms like voat.co and thedonald.win that are dominated by actual neo-nazis. A typical right wing populist conservative thus ends up mingling with actual neo-nazi’s, because social media censors right-wing conservatives. This is how political polarization turns into political extremism.

2.  Thank you Uncle Bob! But Jeff Bezos is in another castle! 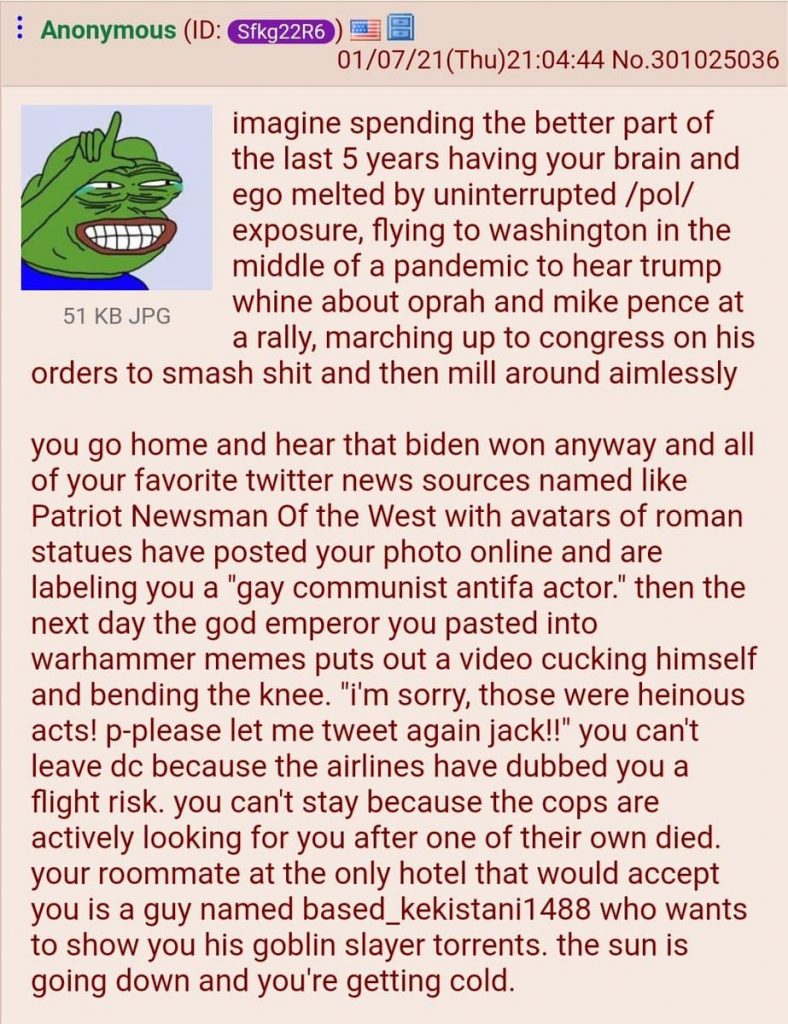 3. Trump doesn’t actually care about you. He needed a blood sacrifice for his ego. You went up there because he told you to, five people died and subsequently he disowned you. Trump supporters risked their lives for him and he abandoned and humiliated you. The same applies to most of your “patriot media”. When the death toll got too high, they stopped cheering you on and started calling you Antifa infiltrators. Everyone backstabbed you. Stop trusting leaders, you can only trust yourself and those who are similar to you: Marginalized, angry and poor.

4. You would honestly be better off making friends with the other side. If you just sat down and poured them a drink, I’m sure you would rapidly figure out you have more in common with those Antifa guys who infiltrated your peaceful protest than what separates you.

The Trump brand of conservatives are angry because a billionaire pedophile had a private island where he took politicians and other wealthy people to rape teenage girls. But here’s something to remember: Trump was good friends with Epstein too. Trump actually faces similar accusations. If you think the world is ruled by satan worshipping pedophiles, Trump is really not the guy who is going to solve that problem for you. I agree that he’s hilarious, but I wouldn’t count on him to rid the world of evil satan worshipping pedophiles.

Here’s another thing to realize: Those Antifa guys are actually right about global warming, like it or not. No, it’s not just a globalist conspiracy to raise taxes on white trash. The Koala’s in Australia were burned alive for a reason. The Arctic ice is gone for a reason. Nature is God’s creation? Well good job Uncle Bob, you’re almost there. Put this in your pipe and smoke it: Nature is God. And a real man, would sacrifice every fiber in his body for God, a thousand times over.

One of your crowd actually seems to have figured this out: The QAnon Shaman, Jake Angeli. He was present at a climate change protest in Arizona. I think he probably smoked too much DMT there and became a QAnon dude as a consequence.

I’ve never seen a group of people who looked so alive.

Take a look at this:

Lonnie Coffman, 70, had 11 Molotov cocktail devices “ready to go” when he was arrested at the Capitol, a federal prosecutor said Friday. The homemade explosives contained gasoline and materials amounting to “homemade napalm.”

To any ladies reading along, please be honest now…

Tell me you wouldn’t, with a straight face. It’s six o clock, you come home from your boring job and now you have to listen to your skinnyfat husband’s nagging voice, whining through his face mask that Donald Trump really went too far on Twitter this time. He has a really impressive Ivy League degree and a good job as a journalist writing for the Washington Post. The QAnon shaman dropped out of kindergarten and begs on the street for a living. Who do you want to sire your offspring? Let’s be honest. I have a nagging suspicion that suddenly all those liberal principles go out of the window.

Everyone knows that Asian girls have an angry white male fetish, they generally don’t even bother hiding it. They spend the best years of their lives in China, holed up in their bedroom, studying to get a degree that allows them to move to Europe or the US for a Phd program. The more convoluted your theories about George Soros stealing the election and Bill Clinton gangbanging teenagers with Epstein become, the more you’ll have to fight them off.

White women try to be more discreet, but the signs are beyond obvious. Ivanka parrots liberal platitudes, but she worships her father like a God. He isn’t just an angry white male, his brain poisoned by a lifetime of testosterone. He is the living God of angry white males. Get this: Seventy year old men bring molotov cocktails to protests, to keep him president. 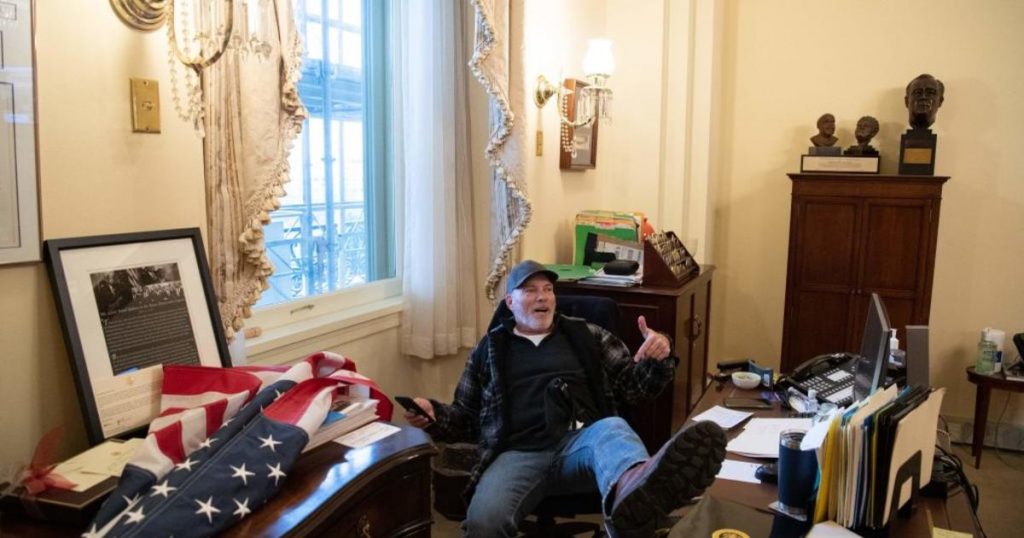 But let’s get back to the basics. Dear leftists: What the hell happened to you? Some angry white male sits in Nancy Pelosi’s office and you want to drink his blood. Are we still talking about the same Nancy Pelosi here? The woman of 100 million dollar? “Well I’m sure that angry white man has really problematic opinions about non-binary women of color.” He snuck into the lair of a wealthy eighty year old vampire and stole some of her documents. How is that not worth celebrating?

What ever happened to “fuck the system”? What ever happened to “fight the power”? I know what happened. You landed yourself an easy job as a “diversity counselor” at a university or a big company where your job consists mainly of complaining on Twitter. Everything is going well for you, at least until you have to make your inevitable teary-eyed apology video where you apologize to People of Colour for falsely claiming “Blackness”.

The easiest way to see whether someone identifies with the power structure is to see how they respond when that power structure is under attack. I laughed my ass off when the Capitol was stormed, as did everyone I know. The left was having a mental breakdown. The reason everyone is outraged now is because the power structure was threatened. It’s fine if some small business is torched to protest “racism” (the guy genuinely seems to have died from an overdose, sorry). It’s definitely not ok when Nancy Pelosi’s office is turned into a mess.

This is what you sign up for if you enter politics, I’m sorry. Diplomacy is the continuation of war through other means. If you enter the political arena, then you had better make sure that people support what you’re doing, because if they don’t then they’ll show you with their fists if you’re lucky. They used to cane each other in the same building where people now panic because a peasant’s blue collar shoes sullied a noble lady’s desk.

If your name is Bob, you self identify as a heterosexual white male, you work at “self-employed” and you dropped out of high school, then the only way you have to express political power in this society is through a bunch of molotov cocktails stored in your pickup truck. And if your whole life has fallen apart because the work-from-home caste panicked in response to a glorified cold virus, then you’re going to decide that you have nothing left to lose and that you’re willing to pay whatever price you have to pay to display your wrath against those who did this to you.