The SARS-COV-2 vaccine is a very special vaccine. After administering it to 90% of the elderly population, the virus it is supposed to protect you against manages to infect as many people as it did before the vaccine was developed, excess mortality looks the same as before, the hospitals still can’t cope with the strain of sick people and wastewater contains more viral RNA than before.

But hey, it still works against severe disease and death! That’s the message you’re told and all evidence will be fitted into that narrative. For example, when most patients in the hospital received the vaccine, it’s not evidence against the vaccine’s efficacy. Rather, we’re supposed to expect that most patients will be fully vaccinated once most of the population has been fully vaccinated.

Compared to the British, the Dutch are somewhat poor at collecting data on this vaccine’s efficacy, but we have recently received some data to reinforce the idea that this vaccine works. Among people aged above 75, 0.36 per 100,000 fully vaccinated people were admitted to the hospital with COVID-19, compared to 3.8 per 100,000 unvaccinated elderly. Looking pretty good right? That’s suggesting a 90% protection against hospitalization. 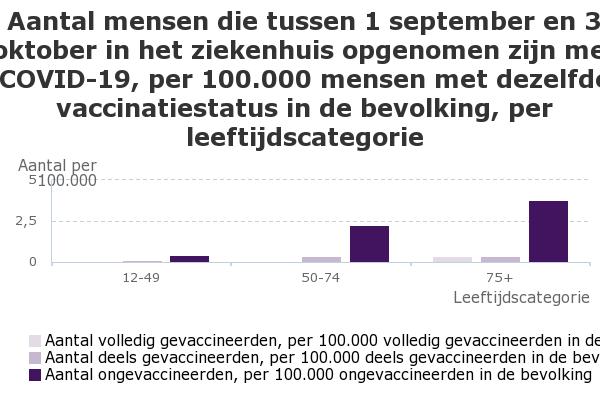 But wait a second. Not everyone who suffers severe disease and dies from this virus will be admitted to the hospital. For elderly in nursing homes, where about 50% of deaths took place back in 2020, a special principle applies: We vaccinate them, but if they do catch SARS-COV-2, we’re generally not going to send them to the hospital. It’s a very stressful experience, with little chance of concrete improvement, when you send an elderly woman with severe dementia to a hospital in an effort to cure her of a respiratory infection. My own grandmother died from a respiratory infection in the nursing home, she was never sent to the hospital.

So these numbers are deceptive. Vaccination rates among elderly in nursing homes are almost 100%, but when severe disease does occur among these elderly patients, it generally won’t show up in the hospital admission statistics. Rather, you would expect these elderly people to show up in the death toll (assuming they do get labeled as COVID-19 deaths), without showing up in ICU or hospital admissions. Unfortunately, the RIVM doesn’t tell us what percentage of deaths occur among fully vaccinated people.

However, there’s another error that has to be kept in mind. When most elderly are vaccinated, the unvaccinated share of the population becomes a poor control group for the vaccinated share. Every age cohort above 65 is more than 90% vaccinated in the Netherlands. So, who are these remaining few elderly who don’t get vaccinated? They are overwhelmingly of ethnic minority background.

And if you have been paying attention, you’ll be aware of the fact that people from ethnic minorities are at increased risk of suffering severe effects from this virus. Before we had any vaccine whatsoever, the majority of patients in the ICU were of non-Western background. If you gave all the native elderly a yellow hat and didn’t give any yellow hats to immigrant elderly, you would be left with the impression that yellow hats reduce your risk of being hospitalized with COVID-19.

In the UK, the same basic principle applies. For the elderly who were vaccinated earliest, the rate of hospital admission is about fifty percent reduced compared to those who are unvaccinated:

Because 93% of English elderly above 80 are vaccinated, the remaining 7% of unvaccinated people are fundamentally different and difficult to compare to the vaccinated 93%. For example, among the unvaccinated you will probably find terminal people, people who are simply too sick to be vaccinated. I suspect there are also elderly people who were unvaccinated because of mild dementia: They’re able to maintain their regular routines, but getting vaccinated is something they never got around to.

Most importantly however, a disproportionate number of elderly above 70 who are unvaccinated are black:

Nearly six months after the government kicked off the country’s most ambitious vaccination campaign, almost one in four black people over the age of 70 were not vaccinated as of 26 May, compared with 3% of white people of the same age.

We already know that elderly from ethnic minorities are at much higher risk of getting sick from this virus than white elderly. We don’t know exactly why this is, it’s likely to be a combination of multiple factors, but it has the effect of making a 1:1 comparison between vaccinated and unvaccinated elderly pointless, because the difference we observe is distorted by demographic factors like this. This is the big statistical trick: Failing to adjust the reported rates for demographic confounding factors.

So this is the easy question to answer: Are these vaccines as effective as they wish to make you believe? The answer is no. If they tell you the hospitalizations, without telling you the deaths, they’re hiding the demographic of nursing home residents who are fully vaccinated but will never be sent to the hospital. More importantly, they’re not informing you of the demographic differences between vaccinated and unvaccinated elderly.

And the sad thing is that I have the impression that the policymakers have started to believe in their own propaganda. They now genuinely think that these vaccines are highly effective, because they don’t bother taking confounding demographic factors into consideration. Because they genuinely believe this, they’re now genuinely shocked by the realization that we’re faced with almost the exact same situation here in Western Europe today that we faced twelve months ago.

But here is the harder question to answer: What’s the long-term outcome? Roughly speaking, it seems to me we will face one of two scenarios, illustrated here using the world’s ugliest graph: 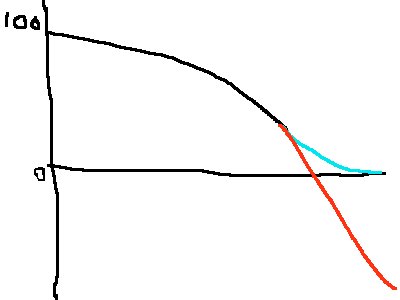 In the blue scenario, the immune response to this virus is effective, but it dissipates over time and so you need to receive continual boosters every six months or so, to remind your immune system to be on the lookout for this virus.

In the red scenario, the changes that occur to this virus in the context of a massively vaccinated population lead to a situation where the immune response that your body is taught to develop causes your immune system to be prepared in an inadequate manner. Your body is defending the Maginot line and the virus shows up through Belgium. You’ve seen different technical terms thrown around, like antibody dependent enhancement, original antigenic sin andsoforth, but they all boil down to this basic idea: An immune system prepared for the wrong situation is ultimately worse off than an unprepared immune system.

Your politicians have been betting on the blue scenario: The vaccines work, but they don’t work for very long, so we need to give everyone some boosters and then we’ll manage to get through this winter. They lost the first round, the vaccine didn’t work well against infection, so they raised the stakes by vaccinating more people and at this point they have gone all in and called the virus’ bluff: Vaccinate everyone and bet that this virus can’t adjust to those circumstances. SARS-COV-2 folds, wanders off and you’re remembered as the next Churchill, the guy who got his people through this crisis.

One of the reasons they’re betting on the blue scenario is because the red scenario is much harder to comprehend: It requires some degree of understanding of viral evolution in the context of mass vaccination during a pandemic. We have never carried out a mass vaccination program in the middle of a pandemic of this nature before, so we don’t really have much useful information to go by.

But what does the evidence suggest? Well I’m afraid to say, as time goes by, it’s looking more and more like we’re faced with the red scenario: Everyone is stuck with a bad immune response that the virus is learning to use to its own advantage. Consider for example, the world’s scariest graph:

Here we see cases per 100,000 people in recent weeks in the UK. The black bar is the vaccinated demographic, the grey bar are the lucky few who skipped this experiment. The graph itself is scary enough, but the really worrisome thing is how it seems to be getting worse every single time they update it: With every update, the relative risk of catching this virus has increased more for the vaccinated people.

There are other aspects to this crisis that are difficult to model and anticipate too. Consider for example, homogenization of the immune response. In a normal pandemic for which we have no vaccine, everyone is infected with a slightly different version of the same virus. Everyone develops a subtly different way of creating an immune response against the virus, so it’s very hard for the virus to change in a way that will make everyone susceptible again.

So, let’s use a metaphor once more. One day, a small wealthy town in medieval England was terrorized by a new spate of burglaries. The people were very worried, but a new locksmith who had only recently moved into this town offered them a solution: I have developed a new lock, that is very difficult to pick!

The townsmen are relieved, all the wealthy men place this new lock on their doors. It becomes a symbol of pride and status. More people want this new lock, so the mayor decides to help every resident pay to have this lock installed on their door. The few who don’t get this new lock are bullied into buying it too: As long as your door’s lock is easy to pick these burglars will stick around here, when they have no place left to break into they’ll be forced to move to some other town.

But then the people wake up one morning and are horrified to learn their local bank was robbed of all of its gold. They go to the locksmith to demand answers, but he is nowhere to be found. The next few nights lead to a spate of new burglaries, far worse than any they had ever seen before, plundering the greatest mansions in town. The wealthy merchants have no gold left to hire guards to defend them however, as the bank where they stored most of their wealth was robbed. The town collapses into chaos.

Some questions to ponder:

-Was it a good idea to install the same lock on every door?

-Why did the locksmith disappear?

-Whose side was the locksmith on anyway?

-If the townsmen hadn’t naively hurried to the locksmith for protection, but had asked themselves where the sudden spate of burglaries originated, would this story have ended differently?