The Netherlands is a country polluted by large amounts of nitrogen. The nitrogen enters our soils, because we have cattle, pigs and other animals, that eat food imported from abroad, while their manure enters our environment. If you introduce biomass from all over the world, that you then turn into manure in a very small part of the world, you’re going to change the environment there: More nitrogen will enter the soils than can leave the soils, the natural cycle is disrupted. Cars also play a role in this as they also emit nitrogen compounds, but the main source is animal husbandry.

It’s not a very hard principle to understand, but of course people deny it. Human beings have a psychological immune system, it blocks them from recognizing their own responsibility for their actions. So what people will generally say instead is that “nitrogen is plant food”, or that “farmers produce our food” and all sorts of other irrelevant nonsense. People would rather just not see the problem.

Part of the problem is that human beings have a short lifespan, during which they don’t pay much attention to their surroundings. If people lived for 200 years, ecological problems would be far more obvious to us. I’ll give you a simple example.

Butterflies lay eggs, that turn into caterpillars. The caterpillars eat from the plant, until they turn into cocoons. The butterflies are however rather picky: Plants don’t want to be eaten, so they produce toxins that many insects can’t handle, so most butterflies end up with a handful of species of plants for which they are specialized. If these plants go extinct, the butterflies will die out with them. 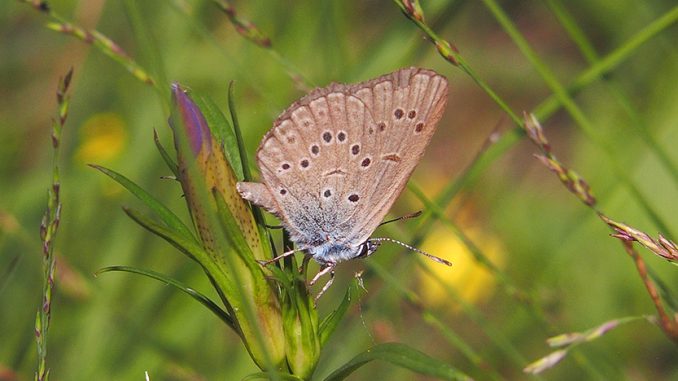 Here you see the Alcon blue. To reproduce, it needs to deposit its eggs on the marsh gentian. Then the caterpillar eats its way through the plant, until it drops onto the ground. On the ground it waits for ants to show up to come pick it up, who will take it to their nest. The ants are fooled into think the caterpillar is a member of their species, because its secretions resemble their own secretions. They take care of the caterpillar, until it turns into a cocoon, which eventually becomes a butterfly that escapes from the ants.

In other words you’ll need both the ants and the marsh gentian, the blue flower, for this butterfly to survive. Here you can see the eggs on the flower: 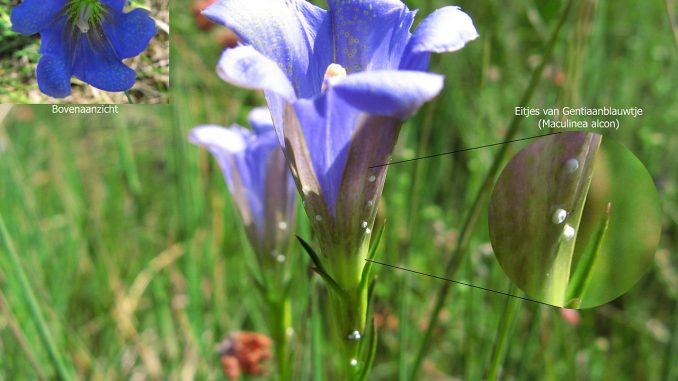 This plant requires a slightly acidic wet soil. Because of the excessive nitrogen in the soil, this plant is dying out in the Netherlands and Belgium. As this plant dies out, the butterfly that depends on this plant for its survival dies out as well. There was a subspecies of this butterfly unique to our country, but it already went extinct.

This is the general pattern we see in the Netherlands: Most rarer species of butterfly are going extinct. There are about four butterflies you see everywhere in this country, I’m going to show the most commonly observed four species to you. 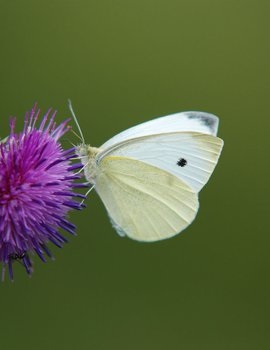 This one, Pieris rapae, is called “klein koolwitje” in Dutch. 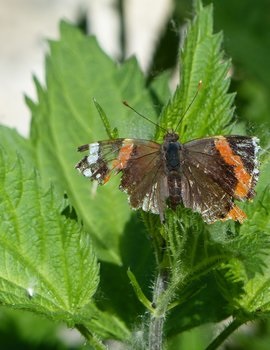 This is Vanessa atalanta, the “red admiral” in English. 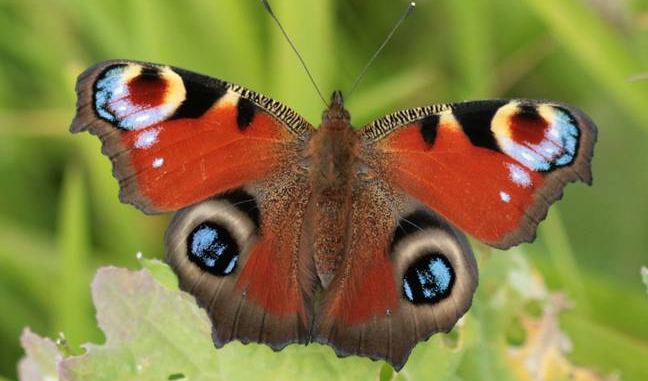 This is the peacock butterfly, Aglais io. 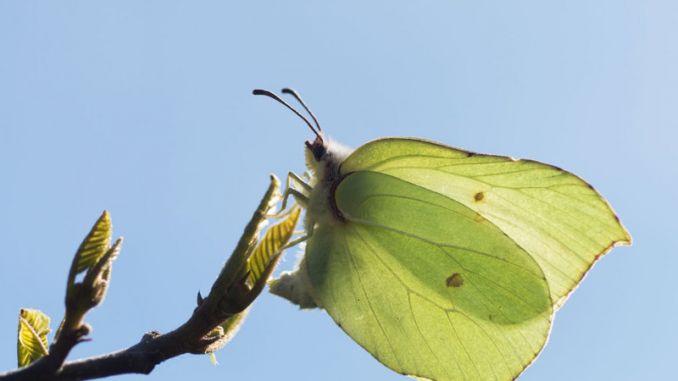 These are the four species you see everywhere. So now we’re going to look at an important question: On what sort of plants do these four species lay their eggs?

In fact, if you look at the top ten of most spotted butterfly species in the Netherlands, you’ll find that about half lay their eggs on one plant alone: The stinging nettle. The stinging nettle is the main butterfly host now, because it grows everywhere. It grows everywhere, because it is a plant that is perfectly adapted to use a soil that has far too much nitrogen in it.

So what does all of this mean? It means an 84% decline in butterfly numbers in the Netherlands between 1890 and 2017. And the real collapse is worse, because as I just explained, the overall collapse masks the collapse in diversity: Many species have simply disappeared from this country altogether.

Take a look at this, evolution of butterflies over the past thirty years in the Netherlands: 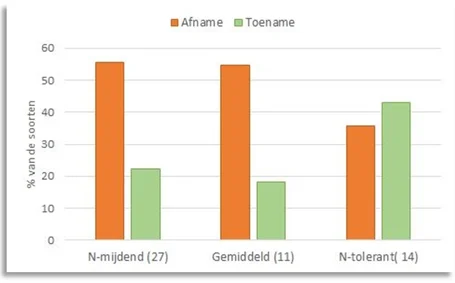 The reason this can happen of course, is that most Dutch people have a very elementary basic understanding of nature. The Dutch liberal party used to have slogans that say “a cow in a meadow is nature too” and you’ll find most Dutch boomers nodding agreeably to this sentiment. They don’t realize that these cows poison the landscape, or that pesticides are used to remove any plants that might disturb the cows so that only grass can grow.

And similarly, Dutch people are not concerned by the decline in biodiversity, because they generally just don’t bother observing it and their limited lifespan means they don’t understand that this situation they live in is not normal: They don’t realize that it’s weird that they’re used to just seeing four or five species of butterflies everywhere, most of which all depend on stinging nettles to lay their eggs.

It’s the proverbial frog in the boiling pot of water. The decline began before you were born, it will continue after your death and because it happens gradually, you never really notice. You never think to yourself “this is weird” or “something isn’t right here”, because you’re not even aware of how things are supposed to function.

And so, whenever someone like me points out to you that what we’re doing is not normal, that our way of life damages our planet, people tend to get angry. If you import soybeans and other junk from around the world and feed it all to animals living in a tiny strip of land in the Netherlands, you ruin our soil. If you take fossil fuels that were stored beneath our feet over a period of millions of years and burn them in a couple of decades, you ruin our atmosphere. It’s really not a far fetched concept, it shouldn’t be controversial, but people just refuse to accept that this is really happening, that our way of life has consequences.

And of course human beings have a choice. We can choose whether we want to take care of the ecosystems we inhabit, or whether we wish to annihilate them for our own selfish needs. It’s not that hard. We could have said to ourselves: “This tiny strip of land near the North sea should not be turned into a giant concentration camp for animals that are fed soybeans from Brazil”. That’s unfortunately not what we did, we wrecked this place to earn money.

And so, I feel like taking a look at this famous video:

When Greta says that entire ecosystems are collapsing and we are in the beginning of a mass extinction, do you think she is wrong? People just responded by making fun of her, because people with Asperger’s don’t automatically adjust to social norms.

And so a few weeks after everyone laughed at her and business as usual continued, a new virus somehow emerged in Wuhan. And then, all of a sudden, everything that had been unthinkable to save our planet, was implemented within days, to save our own skin. Suddenly the sky was free of airplanes. Suddenly we began to make the cut in carbon emissions necessary to keep this planet habitable. And it happened, with about 90% approval from the general public.

But I honestly think, looking back at this video, that you’re looking at an event of metaphysical significance. A teenage girl arrives on stage to tell you that your way of life has to change, as the whole living world is collapsing under your weight. You laugh at her. And then within weeks, a new virus begins to spread.

It’s decimating the Western world’s population, there have been 18 million excess deaths around the world so far and more virulent strains are continuously emerging. In Scotland, one in eleven people now seem to be infected with this virus, despite 97% of the Scottish elderly having received three shots. Every infection from this virus kills some of your T-cells, the very cells your body needs to fight off this virus.

Remember the warning this mysterious oracle gave you:

Change is coming, whether you like it or not.