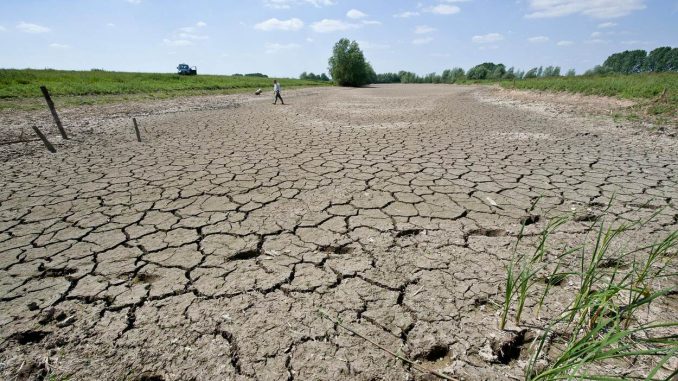 When you change the atmosphere, it has consequences. And people don’t enjoy hearing this, they all have their own unique little reasons, to explain why changing the atmosphere can’t possible have consequences:

-They used to predict global cooling!

-Bill Gates is a fat guy with manboobs!

-Al Gore has a big house!

-Obama has a house near the coast!

And yet, the monster is now staring you at the face, whether you like it or not.

In response to the war in Ukraine, the Netherlands began growing more wheat. Normally we import about a third of wheat from Ukraine and Russia, which will now export less to us, so we tried to compensate. But the lack of rain prevents the grain from sprouting. The farmers can’t use irrigation, because we suffer a lack of groundwater, after a number of consecutive dry years.

And we’re not alone of course. You can look around the world, numerous countries are running into problems like this. At 1 degree of global warming, the point we have now reached, our global climate has changed. Water now falls more frequently in massive downpours, followed by long periods of drought.

During the droughts your soil dries up and your harvests fail. Then during the downpours the water bounces off your completely dry soil and ends up causing floods and landslides. Forests are big plant communities that have large trees that can help them deal with conditions like this. They hold the moisture like a sponge in their massive root systems, then during the drought they release the water, allowing smaller plants to survive.

But humans don’t grow food in forests, we have industrial agriculture, which came into existence in the stable conditions of the Holocene. And so when rain turns into massive downpours, it causes us issues like this.

And unfortunately for us humans, it’s not about to get any better either. After all, a lot of the warming we have caused is still hidden from us, by the toxic air pollution we produce that blocks the sun. If we switched to a renewable economy and stopped all our air pollution today, within ten years we would have another 0.4 degree of warming, on top of the 1.0 degree of warming we already have.

And most of that additional 0.4 degree of warming would end up striking the parts of the Earth where we live of course, we’re not really blocking the sun in the middle of the ocean, it’s places like Lombardy in Italy, where air pollution is so severe that sunlight is stopped from hitting the ground. For the Earth as a whole it’s similar, although globally the Earth has gotten 1 degree warmer, on continents it’s about 2 degrees, as land warms faster than the ocean.

The other thing to keep in mind, is that the damages from warming increase at superlinear speed. The first 0.5 degree of global warming didn’t cause us much trouble. In fact, they seem to have improved global agricultural production. In recent years, it’s becoming clear that 1 degree of warming is now starting to cause us trouble. And yet, we will face another 0.5 degrees of warming, which will cause worse damage. We’re likely to see another 0.5 degree after that, which will again cause more severe damage to be piled on top of the damage caused by the previous 0.5 degree.

You’re now just seeing the start of the catastrophe we’re going to face, it’s merely going to get worse in the years ahead, regardless of what we do. If we somehow miraculously stopped all of our emissions today, there would still be additional warming. In practice however, stopping emissions overnight is impossible.

See, this is ultimately the problem we’re dealing with: Human beings seem to have assumed that global warming is nasty for the polar bears who die of starvation in the arctic, that this is why we have to reduce emissions, or that some obscure islands in the pacific ocean are going to disappear.

And the reason they’re bringing it like this is because nobody really likes to hear the message of: “Hey your children are going to die of hunger if we don’t fix this.” Governments don’t particularly like it either, because it stops people from reproducing. But as you can now hopefully see, that’s the direction this is going.

It was never about the polar bears, or the penguins, or the obscure pacific island that will drown. It was about whether civilization was going to collapse this century and billions of people would die or not. And because they were never honest to you about this, because they never bothered rubbing it in your face, most of you prefer to pretend the problem is not real, based off one obscure theory or another.

I’ll borrow an analogy of a notorious Swedish girl: Let’s say your house was on fire. Would you say:

“Well I read in the news that this Russian scientist is predicting that it’s going to rain tonight.”

“Well there isn’t really much we can do about it.”

“Well it’s probably cheaper if I just let the whole thing burn down and start living under a bridge.”

“I saw this meme on Twitter where the Soyjack says ‘OMG our house is burning down’ and the Chad said ‘Yes.’ so I’m simply going to laugh at you and pretend it’s not a real problem.”

The idea of a global food market is starting to break down. Russia is stealing grain in Ukraine for domestic consumption. Countries all around the world are prohibiting the export of fertilizer. We’re now faced with the reality of deglobalization, as countries hoard the basic materials they need to keep their population fed. And yet, most people just don’t wish to see it.

People simply go on living their lives, as the situation grows gradually more absurd. They bring children into this world, apparently indifferent to the simple fact that we’re not going to have seven billion people around eighty years from now.

Even when people acknowledge this problem is real, it’s always just some intellectual abstraction to them, some vague problem we have to solve in the future, but it’s not something that has real world consequences to them, now that we’re failing to solve it. Human psychology just doesn’t seem to allow for that.

And yet, the reality is pretty simple. If you decide to have a child today, the child will be 78 in 2100. How do you envision the world to be by then? People don’t really ask themselves this question before having children.

It doesn’t take a genius however, to see what’s going to happen. If you’re born today, you’re going to have to live through this mess. You won’t have an ability to “do something about it”. We didn’t do much of anything about it, the kids being born today will be adults once there’s nothing left to do about it.

You’ve seen how people live in Syria, in massive refugee camps after their cities were destroyed by civil war. Would you want your children to have to live a life like that? Because that’s the sort of reality people born today face.

But humans are generally not rational. That’s why they play the lottery. They expect to be the exception somehow, they expect the universe or God will make things “work out” for them. But millions of people today already face the reality that it didn’t work out for them, they’re now suffering famine in the horn of Africa because of the enormous drought.

And their ranks will simply be joined by more and more people. Ukraine today is a war zone for two competing great powers, where many people live in hell on Earth. As we compete over diminishing natural resources, in a world that gradually becomes unsuitable for human agriculture, there will be more people stuck in such misery.

Rather, your main obligation is to avoid bringing people into a world that will have no way to sustain them, where they will be in competition with one another to survive on a planet that is collapsing under their collective weight.