There are some short comments I want to make on the recent peaceful demonstrations against the lockdown in the Netherlands. Police began beating random middle-aged people sitting on benches, as can be seen in the video below:

In response, Dutch people began leaving flowers in front of their municipal buildings, mourning their democracy: 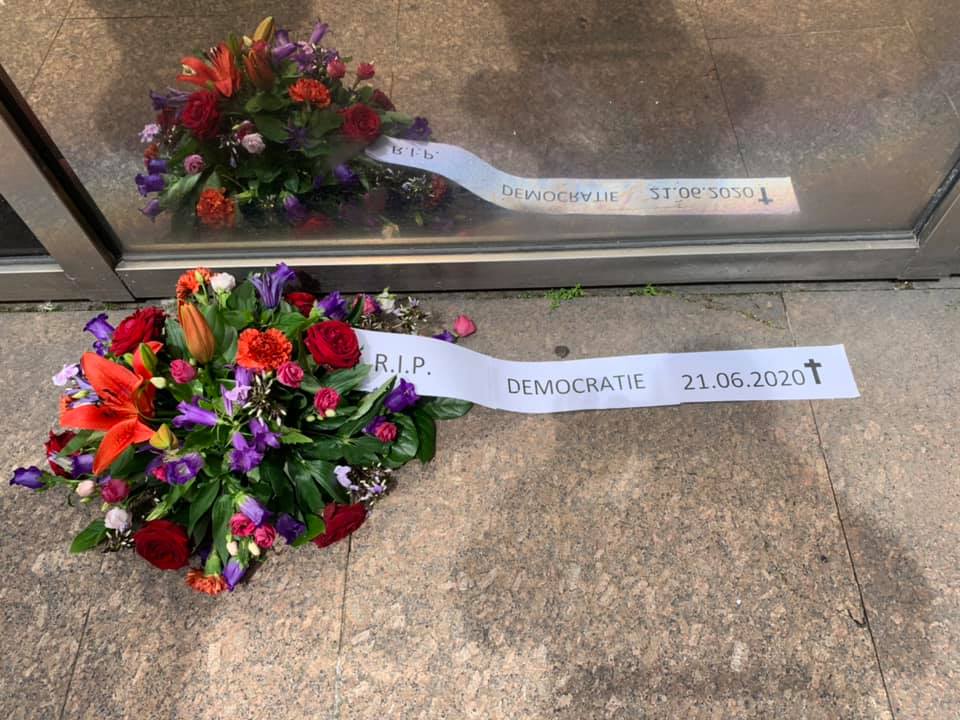 This happened everywhere, all across the country, including in my own humble little town, Baarn: 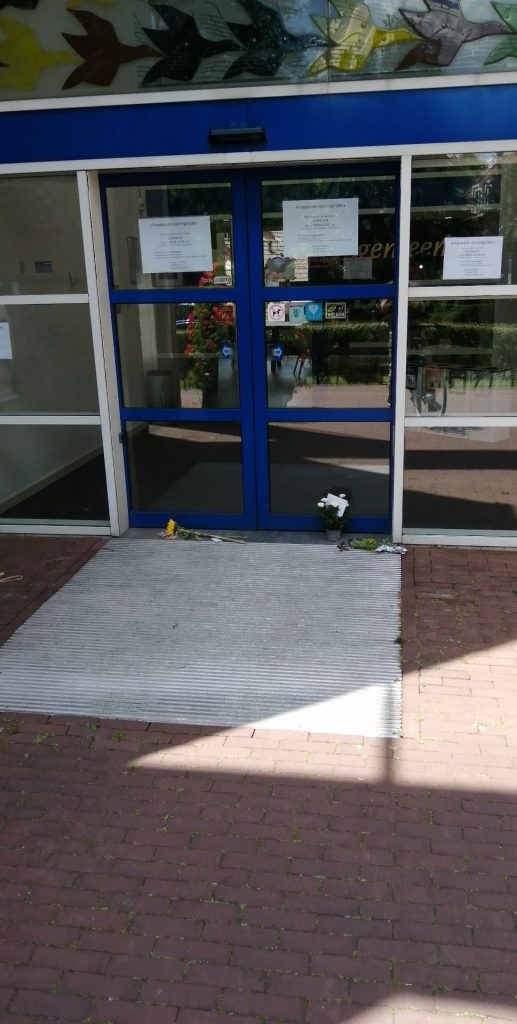 Millions of people in Africa are going to die from the consequences of the ongoing economic implosion caused by the lockdown, but people here insist on protesting against some incident that happened in the United States and happens to have been caught on video.

A guy from Ghana leads a protest here against racism, after leaving a country with 100,000 modern slaves. The thing you have to understand is that these protests aren’t supposed to make sense. They exist solely as an opportunity to display your devotion to the modern day power structure. The only people you tend to see at these protests (I accidentally stumbled into a BLM protest when visiting the IKEA in Utrecht), are blonde college students.

Occasionally, protests are held against the Chinese communist government, that locks hundreds of thousands of Muslims and other religious minorities up in modern day concentration camps. How many people do those protests attract? A handful at best. Falun Gong practitioners have their organs harvested by the communist regime, but nobody cares.

On the other hand, the mayor of Amsterdam can fill a whole town’s square with BLM protesters. That happens, because BLM effectively represents the ideology of the bourgeoisie: The people who run our universities, our NGO’s, our corporations and government institutions, are unified in a commitment to equality. If you make sure you’re seen at protests like this, you demonstrate that you fit into this crowd.

Attending these protests is effectively a career ritual for young white college students. It’s not genuinely their opinion, it’s what they feel obliged to do. All your favorite celebrities are doing the same thing. Look up a white musician on Twitter and you’ll find that sometime in late may they started tweeting about racism, then somewhere early in june, they stopped tweeting about racism. They feel obliged to pay lip service to the new creed and so they get it over with, then they move onto something else.

I’ll give you a short list of causes that would be genuinely useful, if young white college students were willing to take the effort to protest against them:

-Hundreds of thousands of religious minorities locked up in modern day concentration camps by the illegitimate Chinese communist government (the real Chinese government survives in Taiwan).

-Murder of homosexuals by the Iranian and Saudi government

Here’s what’s not particularly useful (except as an obligatory right of passage if you plan on pursuing a career at an NGO after finishing your sociology degree):

-Protesting against police brutality in the United States.

Imagine you’re a European government official and your population is angry because they are impoverished and the economy has collapsed. What would be the ideal outlet for them to rage at? Have them rage at American police officers! The only thing better than that, would be for them to scream at the clouds. The government can then respond in the easiest manner possible: They issue a statement, officially condemning racism!

So why does this sort of thing happen? When a society stops growing economically, resources become scarce and people become forced to fight over them. What tends to happen in such situations, is that the middle class starts to prey on the working class. The easiest way to do that is to take bourgeois social norms and to drive them towards their natural extreme.

These days, it’s very difficult for normal working class people to comprehend what they need to do, to avoid being accused of racism. You can’t dress up as black people, you have to say “people of colour” instead of “coloured people” and words that were acceptable a few years ago are now grounds for social ostracism.

If you think that government officials and figures in the media are starting to behave absurd, you have to comprehend that these measures are intended to be alienating. Imagine you’re a captain on a ship. You realize your supplies are limited. You can make it to shore, but not with all your personnel, some have to be disposed of. How do you do this?

You start tightening the rules, but you do this at a pace that ensures there’s always a tiny fringe minority that struggles to keep up. You also teach your personnel to feel outraged by those who struggle to keep up. If you struggle to keep up, you’re thrown overboard. If you compare the huge number of college students with the tiny number of job openings in government departments, media outlets and NGO’s, you’ll notice the same thing going on. There’s a long list of causes you have to pay lip service to and a long list of words that were fine five years ago but that are now taboo.

College students now face the same situation. One awkward Halloween costume and it’s over. Say “coloured people” instead of “people of colour” (an easy mistake to make if you’re not a native English speaker) and you can forget a career. One Apache Attack Helicopter joke and you can serve coffee instead of filing paperwork at a government department.

The problem the system now faces is that the number of people it has to dispose of is so large that a growing group of people don’t really have anything to lose. The people protesting against the lockdown, are predominantly middle-aged working class white people, who don’t have to worry about being “canceled”. If you think I’m connecting things that are unrelated, consider that a group of public health experts accused the anti-lockdown protests in the United States of being “rooted in white nationalism”.

There’s now a huge divide in Western society. On the one hand we have government bureaucrats and other members of the ruling class and the young college students who still believe they have a chance to rise through the ranks. On the other hand, we have the regular people, who don’t really have anything left to lose. Those people are willing to revolt against the absurdities imposed on them.

What’s going to be interesting to witness, is when the people with nothing left to lose start outnumbering those who still see themselves as future blue checks on Twitter. The average college student in Amsterdam still genuinely thinks they’ll end up with a comfortable job as a “diversity counselor” somewhere at a university or government department, who can get paid to complain on Twitter about racism.

At some point, it’s going to become painfully obvious to them that there is no real future: You think you can make a living out of parroting what you learned in college, but the ship is suffering excess ballast, more people will have to be thrown overboard. Real estate prices in the Netherlands are going up by 8% a year, there literally just isn’t sufficient place for young people to live anymore here, comfortable government job or no comfortable government job.

Eventually, college students will talk to college graduates, who will tell them: “Yes I jumped through all the hoops, I did all the extracurricular activities, I volunteered in a Cameroonian orphanage, I liked the Malcolm X page on Facebook, there’s a selfie of me at a BLM protest circulating, I have a double major in sociology and history, I got through very selective tests to get myself a job at a government department, but I still can’t buy a house and I still buy half-rotten 35% off fruit at the local supermarket to make ends meet.”

What happens then? That’s when there will be serious revolts. Of course, by then there won’t really be anything left to revolt against. The economy will lay in shambles, the shortage of houses will take decades to resolve so there will be an entire generation that simply can’t start a family before their ovaries have withered away, while the few who have made a fortune during the current crisis will have emigrated to other countries, including the current generation of politicians who will have joined a corporate board or an International NGO.

That’s the sort of stuff you don’t want regular dumbass college students to figure out, because they’ll get really angry and some official statement that you “condemn the housing shortage” won’t reduce their anger. Personally, I hope to be out of this country before people figure out what’s going to happen, because it won’t be pretty.