VIDEO: 🇨🇳 Crowds packed out a water park over the weekend in the central Chinese city of #Wuhan, where the #coronavirus first emerged late last year, keen to party as the city edges back to normal life pic.twitter.com/SJFBmx5sU8

Wear your facediaper gweilo, your grandma might get the flu

Something I’ve never understood about the white supremacists is as following: If Northern Europeans, with their elongated skulls, thin lips, blonde hair and blue eyes (everything mongrels like me lack) are the world’s master race, why do they need you, a fringe minority, to save them from their demise? Nazi’s will tend to argue that their favored people are so pure and holy that they are easily taken advantage of and as a result end up exploited and embark on a suicidal trajectory.

I don’t find this to be a particularly persuasive argument, but if people are stupid enough to deny reality because they wish to appear virtuous to their peers, I would say they deserve the consequences of that behavior. I would also argue that such behavior is in no way noble. If you respond to riots and looting by handing over money and disbanding the police, then you deserve more riots.

1/5 This @nytimes article by @paulmozur is a smoking gun on the genesis of the coronavirus lockdowns.

According to the article, the CCP launched a massive social media campaign in ITALY to advertise its coronavirus lockdown measures in early March.https://t.co/BEOkiFFPfm

And when you’re dumb enough to shut down your own economy in response to Chinese manipulation of social media, then you deserve to spend the rest of your lives paying off your democratically elected government’s debt to the Chinese.

When the pilgrims conquered the Americas, we can say they were being cruel. They committed genocide and fought in a manner that was unprecedented among the natives. When the colonists exterminated the Pequot tribe, the Narragansetts and Mohegans tried to leave in disgust. They did not want to be associated with the kind of cruelty the English engaged in.

The Chinese on the other hand, fought us without using weapons, they defeated us with clever use of words. They fought us using tricks we’re perfectly familiar with. We love to lie to justify our wars. Babies were pulled out of incubators, Gadaffi gave his troops viagra to rape women, Saddam had weapons of mass destruction, ships were attacked in the gulf of Tonkin, you name it. We invented propaganda.

What did the Chinese do? They convinced you there’s a deadly virus and the only solution is for you to spend your days at home watching Netflix, until those genius omnipotent scientists come up with a vaccine. They built up a bot network on Twitter, pretending to be regular hip young 90IQ 90k college debt virtue signalers, complaining that we are merely washing our hands when we should join Wuhan in locking people up inside their homes.

It started out seemingly reasonable. “Flatten the curve!” Who could disagree with that? Then, through a marvelous sleigh of hand trick, “flatten the curve” turned into “squash the bug”. Western civilization is now in an artificial coma until a virus that kills elderly in nursing homes has vanished off the face of the Earth. All that was necessary was some gentle nudging by the Chinese and some scary videos on Twitter of Chinese elderly men falling face first on the ground, something that had literally never occured before in a country with 1.6 billion people until someone ate a diep-fried bat.

Admittedly, the Chinese aimed for our weak spot. Our big vulnerability is that we live in democratic nations. This requires a very intelligent well-informed population, to ensure we get competent politicians. We don’t have an intelligent well-informed population. We have millions of virtue signalers, who signed up for 90k worth of college debt to spend four years of their lives learning how any book written before 1950 is offensive. Those people base their opinions on trending hashtags on Twitter and believe that by sitting at home unemployed they can abolish capitalism and force the government to hand them a universal basic income.

China has a much simpler solution to that: Authoritarian state capitalism. It’s a form of capitalism in a nation without democracy, ruled by a small group of old men who have all known each other for decades. You can’t manipulate China’s equivalent of Twitter, the government will simply censor you. The biggest media corporations in China have departments that exist solely to make sure the company’s policies align with the state’s interests. For all practical purposes, Tencent, the latest new corporate shareholder of Reddit, is an arm of the Chinese government.

How much influence does a twenty-two year old cultural anthropology student with back-combed dreadlocks and a nose-ring have on Chinese government policy? The answer is zero. In Europe and North America, people like that decide what other people on Twitter believe. Those people then vote in elections, leading to the election of people like Ocasio-Cortez.

We should be thankful to the Chinese for being merciful and sparing us the humiliation of actually having to fight them. You’ve seen this picture a thousand times before and you’ll call me an “anti-intellectual sexist right-wing populist” for sharing it, but here you go: 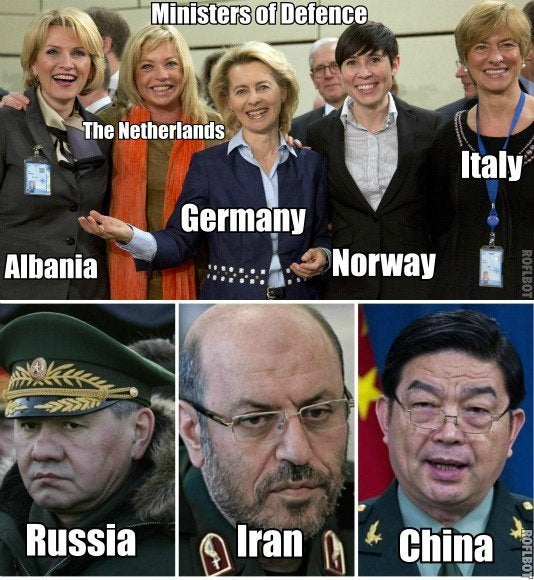 Who thinks in decades? Who thinks about the next election? Who lies awake at night about geopolitical developments? Try it, for once, turn off that part in your brain that says “I’m not supposed to say that” and listen to your gut. You’ve spent millions of years, evolving a brain that allows you to make quick decisions based on gut instincts, in the past few thousand years the conscious part of your brain evolved that understands language and is now getting fooled by bullshit on a continual basis. What does your gut say? Who knows how to fight a dirty war?

China steals American trade secrets worth 300-600 billion dollar on an annual basis. What do the Americans do against the Chinese? Say mean words on Twitter? I talked to a very regular average Chinese teenage boy on chatroulette once, years ago. Within a few minutes, he asked me in broken English whether “China is one nation or two”, in reference to Taiwan. Do European teenage boys spend their days thinking about this sort of stuff? When was the last time you heard a European teenage boy complain about the Turks occupying Constantinople? They turned the Hagia Sophia into a mosque again. Do you care? Do you feel insulted, humiliated? You don’t care, you don’t think of yourself as part of a collective.

The Chinese on the other hand, are proud of being Chinese. They know they have an advanced culture that goes back thousands of years. There are articles online about how Chinese tours in European cities work. They go to European museums and look at our art and architecture from our glory days. In the bus, the tour guide will mention China’s century of humiliation and the difficult puzzle that Chinese intellectuals try to answer: Why did China fall behind, in an era when we took over the world? That’s what the Chinese ask themselves. Here’s the kind of question you debate with your friends when you go on vacation: “Should we ask that guy with the long hair in the resort if he knows someone who sells weed?”

I think it’s time we swallow our pride. We had a nice winning streak, but it’s definitely over now. When we entered the Age of Exploration, we accidentally stumbled upon other continents. The people we encountered there had no horses or other rideable animals and no metal weapons, just a wide variety of magical plants and mushrooms that help me get through the day without needing any SSRI’s. The colonists used gunpowder (an invention copied from the Chinese) to force them into submission, with some help from exotic viruses brought along from the Old World. Submission here being a euphemism for genocide.

At this point, the Europeans got a lot of bonuses. Potatoes were brought along from America to Europe, leading to a dramatic increase in calorie production and thus population growth. Gold and other metals were found in abundance. We had chopped down our own forests in old Europe, but in the Americas we found vast forests and herds of wild animals to exploit, causing tremendous economic growth. The wealth we encountered in the Americas then allowed us to conquer the rest of the world and force the Chinese into a “century of humiliation” that remains a big scar in their collective psyche until this day.

It’s an accident, a lucky accident, that temporarily helped us jump ahead in this game of Civilization. The Aztecs had a bad starting location, with no metals or draft animals. Their cities were as huge and densely populated as our great capitals here in Europe, their system of food production was highly impressive, but they had to make do with the limited options available to them. In contrast to us, they had no Chinese, Indians or Arabs to exchange technologies with either.

You’re wondering if all of this is ironic. It’s not, it’s post-ironic, I’m being serious while pretending to make a joke. The Chinese government saw your Achilles heel and they stuck a spear into it. You’re easy to manipulate by hip and trendy young people. If Kylie Jenner decides tomorrow that it’s cool to get a hysterectomy your eighteen year old sister will want one too and your government won’t stop the media from reporting on it.

In China on the other hand, the government decides who gets to reproduce. When an ethnic group or religious sect falls out of favor with the government, they’ll have their organs harvested and be subject to forced sterilization and imprisonment in concentration camps. Do me a favor, ask your favourite Hollywood celebrity to tweet one simple thing: #uighurlivesmatter. The fact that you will be completely ignored shows you why hypersocial people should not have the right to vote.

I shouldn’t use hypothetical examples, when the signs of our decadence are so out in the open. You live in a society where girls can be raped and instead of recognizing their trauma, doctors will comply and offer them the gender reassignment surgery they request. When J. K. Rowling then openly admits that she’s worried because she could quite easily imagine herself ending up like one of these girls if she had been born a little later, her career is over. For all practical purposes, your society has descended so deeply into suicidal depression and totalitarian political correctness that the Chinese government merely had to hand you the rope to hang yourself with.