The narrative you’re hearing everywhere now, especially in the mainstream media, goes as following: “Stupid mainstream media, Omicron is much milder than Delta, you were fear-mongering for no good reason!” However, this misses one important point: You only have two groups of people to look at now. On the one hand you have South Africans, on the other hand you have the travelers. The travelers are generally healthy young people, so we expect to see them do fine. The fact that they’re still getting it, even after their third shot, is what’s worrisome however.

Then there are the South Africans. South Africans are also very young, but they also had a massive wave of infections just a few months ago. More than 80% of the population was thought to already have been infected by august of this year. We know that if you’re infected, your next infection is almost always going to be milder. In one study of reinfections, chances of hospitalization were found to be 90% lower and no deaths were found. In other words, it makes perfect sense that this wave in South Africa is very mild. It tells us very little in regards to what we can expect in elderly people with no previous exposure to the virus.

But there is a point I find far more important to make today. We all know that our species is in deep trouble. There are seven billion of us, on a planet that can barely feed a billion specimens of our kind. We disguised this with artificial fertilizer, overfishing, greenhouses, pesticides, irrigation and various other techniques that boost our ability to feed ourselves far beyond what the Earth could deliver in the absence of these unsustainable interventions.

Worse, these unsustainable interventions erode the Earth’s carrying capacity. If you fixate nitrogen with natural gas to produce synthetic fertilizer, you’re feeding yourself today, but the carbon dioxide enters the atmosphere where it eventually warms up the planet. You probably won’t be able to feed as many people in India fifty years from now as you do today. Our industrial activity also poisons the soils, there are vast swathes of land where humans can no longer safely live, let alone grow food.

There’s just not about to be a techno-fix that’s going to solve all of these problems for us and it should be pretty straightforward to see the writing on the wall at this point. Bill Gates favorite author, Vaclav Smil, has written a lot about how long the energy transition will take us. Bill himself has also warned that two degree of global warming is probably not even achievable anymore at this point.

I know there are people in denial about all of this stuff, but if you don’t see the problem, it’s because you don’t want to see the problem. There’s nothing I could say that would convince you otherwise. I remember hearing talk radio shows, where these middle-aged Republican guys would argue that whenever they open the old wells in Texas they’re full of oil again. If that’s the type of stupid crap you believe, I stand no chance of changing your mind.

But, imagine you were not in denial about this stuff, you were very powerful, you want to save the world and you’re a ruthless utilitarian. What would you do? You figure out who consumes the most resources while being least essential to the overall functioning of our society and you start to get rid of those people. Those would of course be elderly people in the Western world. The earlier you act and the more of them you eliminate, the less catastrophic the overall outcome would be.

We have now essentially created the kind of conditions in which you could dramatically reduce the world’s population in a controlled fashion. Let’s have a look after all at what we have created:

-We have created a system in which the narrative is controlled by a handful of social media companies. Twitter will censor Harvard epidemiologists when they suggest that masks don’t work. Entire communities are just eradicated overnight when they speak critically of the vaccines. Reports of side-effects can be effectively suppressed. Because they control the narrative, they can generate the impression of a fake consensus that does not truly exist.

-We have created a system in which people will consent to have harmful material injected into their body every three months, to maintain their freedom. You could throw whatever sort of dangerous stuff you want into those injections and people would have no real way of knowing. You could target whatever demographic you want: The elderly, the reluctant disenfranchised who waited for months before getting their first shot, ethnic minorities.

-We have created a system in which people can’t flee. You’re prohibited from traveling in many places if you did not receive the injections. In Canada you can’t even board a train anymore.

-We have created a system in which you can be thrown into a camp at any given moment, because the government has determined that you carry a dangerous disease.

-We have created a system in which dissenters are economically disenfranchised. The American congress engages in insider trading based off secret information they have about the pandemic. The big tech companies became even richer, when brick and mortar stores were forcibly shut down by the government. If you violate the rules, they will now bankrupt you with fines. Meanwhile you are prohibited from doing your job, if you refuse to undergo a medical procedure.

-We have created a system in which most people can’t even afford to reproduce anymore. You live in one room apartments in cities with real estate prices that go up by 20% a year now. You literally don’t have the physical space for a child. You can’t really leave the city anymore either, because there are hardly any jobs outside of the dense metropolitan cities and you’re going to end up in towns where you’re the only adult under thirty.

-We have created a system in which government officials will have their houses raided by the judiciary branch to find out what they knew about the pandemic. Do you think these elected government officials still work for you? Of course they don’t. Ignore shadowy groups like the WEF for a moment. Even if your prime minister thinks it’s useless to have a lockdown, the prime minister will be afraid of saying no, because you’ll face political prosecution. If you do what every other country does you’re fine, if you try to do what Sweden does, you risk facing political prosecution.

-We have created a system in which people are now fine with witnessing unexplained mass death. Here you can see the most recent numbers for the Netherlands: 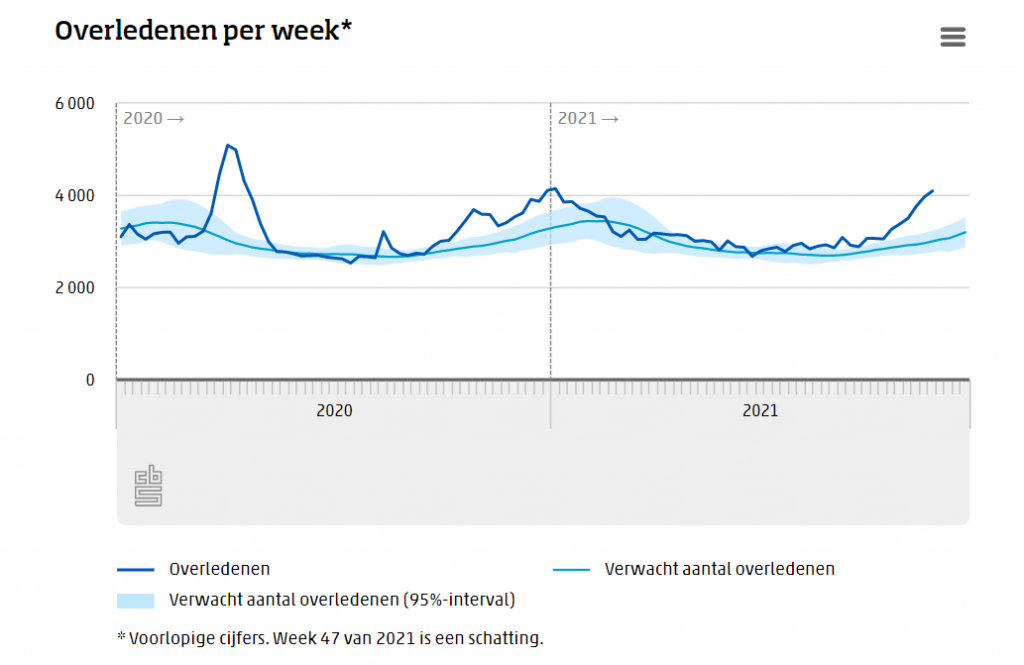 We witness 30% more deaths than we normally would be seeing. More than 80% of this excess mortality is non-COVID. People don’t really care, they just accept it. This is a thousand people a week now who die from unexplained factors, in a country of seventeen million. People are afraid of a virus because they’re told to be afraid of a virus, even as four out of five excess deaths are unrelated to this virus.

-We have created a system in which violent suppression of protests is now normalized. The Dutch police will shoot on crowds, people are blinded by water canons and bitten by dogs. This is now seen as a normal response to people protesting against the lockdowns and the vaccine apartheid system.

-We have created a system in which your ability to work a job, go to college, visit a restaurant or even enter a supermarket is now under the condition of a database that registers whether you’re allowed to enter or not. The government could revoke your access and you would quite literally be left to die on the street of hunger.

This is, whether you like it or not, the type of infrastructure you need for genocide. Genocide is not a crazy right-wing populist conspiracy theory. Genocide is the rule of history, particularly the 20th century, when governments killed over a hundred million people. You could imagine yourself to be blessed and lucky, living in the end of history, a society where the whole world becomes composed of liberal democracies with a McDonalds on every corner of the street.

On the other hand, it could also be that the future is simply going to offer us more of what we have seen in the past. I don’t want the government to have the right to force medical changes to my body. One of the reasons I don’t want the government to have that right is because the 20th century has shown that formerly democratic governments can transform into dictatorships that go about secretly exterminating entire ethnic groups under the guise of public health: 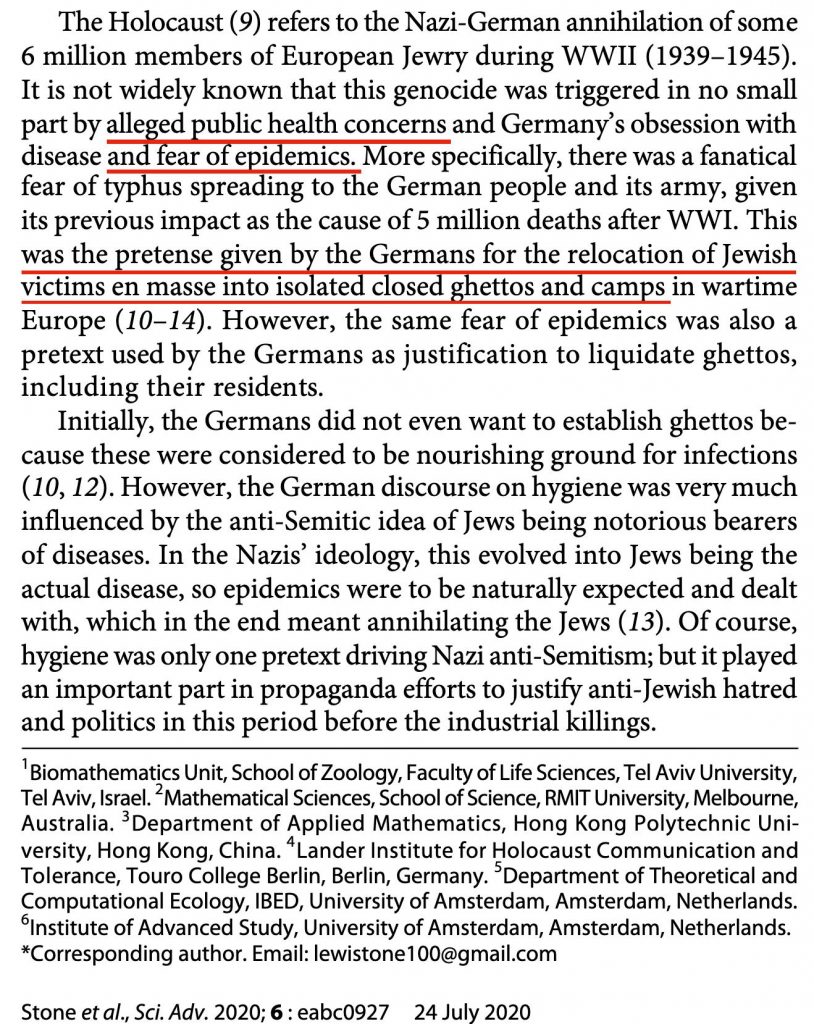 Always remember that the Holocaust was just a conspiracy theory until the camps were liberated. The other thing you need to remember is that people don’t construct the infrastructure for genocide with the idea of committing a genocide. The Holocaust was the ultimate outcome of a steadily escalating slippery slope of dehumanization and restriction of human rights.

It’s theoretically possible that Bill Gates is a friendly harmless geek who wants to save the world. It’s theoretically possible that my government officials are perfectly nice people who feel forced to implement policies they don’t really want, to protect us against a virus they imagine to be extremely dangerous. It’s also possible that they think we need some sort of China-lite system with a social credit score that will help us get our carbon emissions down to zero.

And it’s also possible that they’re planning to kill ninety percent of us, as the billionaires and their families sit out the storm on their megayachts somewhere in the Pacific ocean, the politicians and other lackeys inject themselves with saline placebo’s for the camera, your family members start dropping dead from strokes and heart attacks in the coming months and you start seeing AI and drones deployed on a massive scale to keep the system running. It’s even possible that they’re all demonically possessed, by incorporeal entities that envy us for having physical bodies.

The honest truth is that we don’t really know what’s going on. Conspiracy theories that seemed absurd two years ago are now our lived reality. If Alex Jones had told you two years ago that you would be prohibited from going to a restaurant if you were unvaccinated, you would be laughing. At this point, I wouldn’t be shocked to watch Biden grow green scales and drink the blood of orphans on camera by the end of next year. I would probably be accused of herpetophobia if I spoke out against it.

But what I do know is this:

It’s much easier to deliver new responsibilities to the government, than it is to take away responsibilities from the government. We have now given the government the task of eliminating a seasonal respiratory virus and the bureaucrats who work for the government and in academia don’t seem eager to let go of that responsibility. At this point, there are vast swathes of people, whose job it is to carry out the rituals of this new religion. Those people will be eager to hold onto those jobs. You don’t want any government to have the kind of power that our governments now have over the population. Historically, whenever these systems were built, they were eventually used. I honestly doubt this time will be any different.