There are a number of reasons I don’t engage in casual sex. The number one reason of course is not that I’m a good devout Christian. Rather, it’s that I’m a narcissist, which always stems from a fragile ego. In the words of another narcissist: “You can be my girl, if I can be your world.” And so, whenever I wonder what I might miss out on, I meditate on the most important graph in the universe: 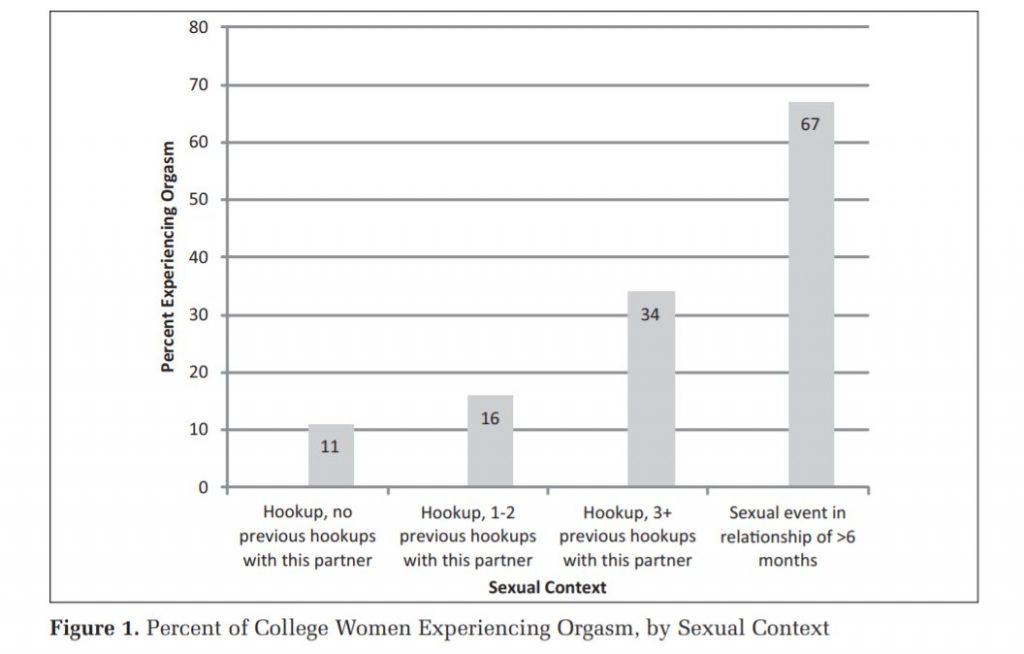 This is honestly the Kali Yuga’s equivalent of a Buddhist mandala, you should meditate on this daily. Print it out, put it in a nice canvas and hang it on your wall in your living room, next to the torture instrument through which our Messiah sacrificed Himself. You think I’m joking, but I’m not. If you need an explanation of the graph, it’s because for women it’s almost entirely psychological. If her heart doesn’t skip a beat when she thinks of you, it’s just going to be a disappointment for her regardless of what you do.

Of course there are possible counter-arguments to consider here. What if you genuinely worship a girl but then she doesn’t reciprocate, she treats you like a doormat (rather than a chair)? Well, then the joke’s on her. She’ll marry a dudebro, a guy who likes to barbeque, watches sportsball with his mates and hunts rabbits. But she’ll go into her grave missing you. Have some mercy for her and turn the other cheek, don’t post pictures of your children on social media where she can see them.

Women select their own mates in Western civilization, they decide whose children they’re going to give birth to, even in conservative religious communities where most children are born (statistically speaking your parents are more religious and conservative than you). That’s the direction human evolution took and we’re still adjusting to that reality. Casual sex is a genetic dead end and you devalue yourself in the eyes of women.

If you’re autistic as a guy, you’re dealing with the side-effect of women picking their own mates. Autism is a product of higher prenatal testosterone exposure. This leads to a number of side-effects, among them, as counter-intuitive as it might sound, androgyny. The same traits that make you autistic have the effect of making you a more desirable mate. Lil Peep’s older brother has autism, I rest my case.

When women pick their own mates, you’ll notice they differ from average males. Look at Korean boybands as an example, the guys are androgynous. What guys generally want (particularly when they don’t take psychedelics) is to be the alpha male, the guy who dominates everyone else. There are not a lot of posters of Arnold Schwarzenegger in teenage girls bedrooms however. What women want is quite simple, they want to dismantle male dominance hierarchies. Sometimes they succeed and you end up with phenomena like the Bonobo in Congo.

Narcissism is also another side-effect of women picking their own mates. Narcissism, in its very essence, is just the need to be treated as special by the people you interact with. Fragile egos lead to men who take more effort to make a woman happy. Women wishing to get married are actually more prone to seek out narcissists. When she calls you a narcissist, the proper response is to be flattered and just not say anything.

You could say that we should revolt, throw off the matriarchy and return to the rule of man. I think the odds are not in your favor. We have been losing this struggle for millions of years. I hate to break it to you, but a female chimpanzee is a better alpha male than you, she would beat you in an arm wrestling competition. You look like a feminine childish chimpanzee. You can look at gorillas, the one ape that manages to maintain patriarchy, look at their tiny dangling penises and tell me if that is the future you want to set up for your great-great-grandsons.

Women don’t like guys who are hypochondriacs. You walk into the supermarket without a mask on and you’ll catch them violating you with their perverted female gaze. “This guy is not afraid of germs entering his mouth.” Is what they think to themselves. It’s the same reasons the Jews prohibited the consumption of shellfish: A desperate attempt to prevent Jewish women from removing the hypochondriacs from the gene pool. It didn’t work, the biggest lockdown opponents tend to be Jewish men (with a honorable mention for Indians), their brains a product of generations of Jewish women looking for guys sneaking off to the coast at night to look for oysters in violation of Halakhic law.

I care less about my own future than I care about knowing that I was on the right side of history, they can throw me into a concentration camp in Xinjiang and harvest my organs for all I care. Lockdowns are just another desperate attempt by the Chinese at reversing the direction of human evolution, in cooperation with a handful of Western men in academia with bad genes that lead to poor immune systems. We tell men to become afraid of germs again and to cover their mouths. It doesn’t work, the men with strong genes don’t put up with it and start uploading Youtube videos of themselves, sitting in their cars, ranting and raving about Great Reset New World Order evil plots. They don’t understand the real conspiracy: It’s really just a simple case of Xi Jinping wanting to be the alpha male again in a world where all dominance hierarchies are breaking down. Why is that, why is this Xi Jinping guy so eager to make our lives miserable? Look at the anatomy of a male gorilla and you have your answer.