There are not really many countries out there, that have succeeded at eliminating drug use. Rather, what generally happens is that success at eliminating one substance or another, shifts use to something else. You can see a good example of the mechanism at work, with the decision in the Netherlands to lift the legal drinking age from 16 to 18. Until 2014, you were allowed to drink beer and wine at 16, but had to wait with liquor until you’re 18. It’s hard to get really drunk with beer, so this was about as sensible of a policy as you can get.

For whatever reason it had to be changed however, so teenagers were left without any legal drug. They responded by discovering a new drug of their own: Nitrous oxide. It’s somewhat similar to alcohol (both NMDA antagonists) and it’s easy to purchase. Unfortunately however it’s also addictive and when you take enough of it, you’ll end up with irreversible nerve damage. It’s also bad for your cardiovascular system, people need to have limbs amputated because of blood clots from the nitrous oxide. These sort of things happen quite regularly now, so people seem to be gradually losing interest in this drug again.

Of course nitrous oxide had an advantage over most other drugs, that helped make it popular: It’s discreet. You can smell it when teenagers smoke cannabis. On the other hand, when this phenomenon began, parents didn’t even recognize nitrous oxide as a drug. Metal canisters and balloons don’t look like a drug, they look like regular party articles. The safest drugs (cannabis, mushrooms and cactuses) are among the least discreet.

Once you have created a trend, it tends to be difficult to stop it, it takes on a life of its own. That’s the situation with nitrous oxide: It was born in the vacuum created by the alcohol ban and so now there’s an entire industry, with people you can call, who will deliver it to your doorstep within an hour when you’re having a party.

But in the United States, the war on drugs has led to the rise in popularity of a drug that is even worse than nitrous oxide. This is the most hellish drug imaginable: Diphenhydramine. Here you can see a highly accurate replication of the DPH experience:

just found the most accurate benadryl trip replication video of all time pic.twitter.com/Qied9ecN0G

It’s an experience basically equivalent to seeing hell on Earth. Unfortunately, although being highly unpleasant, you can grow addicted to it. A DPH addiction tends to end in death. I made a thread about the DPH subculture that you can find here. DPH has killed at least 500 people in England in the 21st century alone.

And here’s the amazing thing: It’s legal! You can easily get it over the counter! DPH addiction is growing rapidly in the United States:

And on Reddit you can notice it too. Here you can see the statistics for the DPH subreddit: 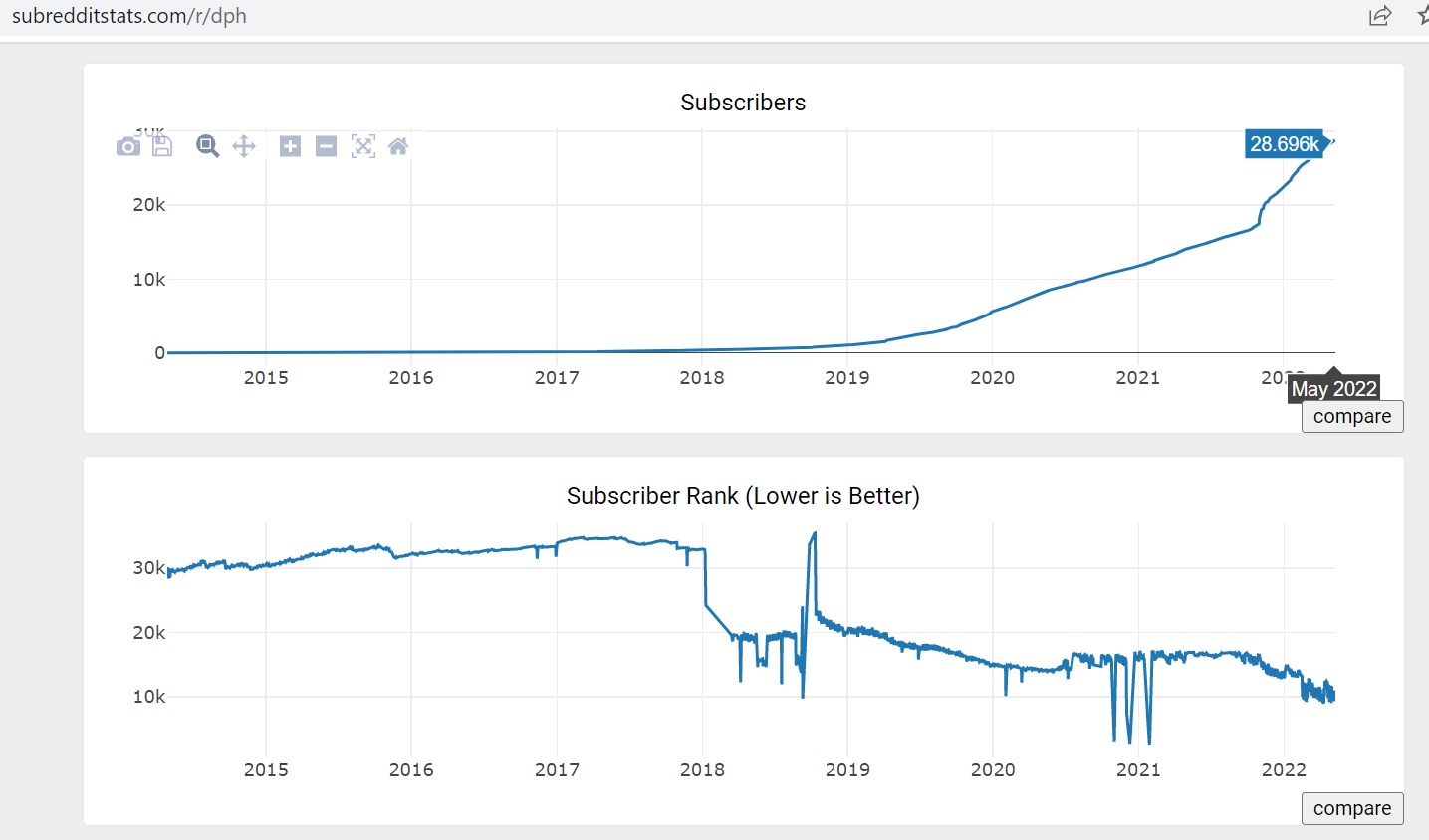 This tends to be the general pattern. Humans have a desire to alter their mind, particularly if they’re young and unhappy. The elderly don’t like this. They don’t really care whether their children are happy or not, but they do care whether their children take drugs or not. This leads to prohibition, but it’s practically impossible to prohibit every drug. As a result, the use shifts from one substance to another.

A few societies have succeeded at completely eliminating drug use, but they run into other problems as a result. Consider Japan. As an archipelago, they have gotten away with almost completely eliminating any use of psychoactive substances. This merely results in other problems however: Their suicide rate for young people is very high. They also have millions of Hikikomori, people who simply never dare to leave their childhood bedroom.

But in Europe and North America, none of this is going to work anyway, as the drugs are manufactured domestically. What we see here is that the strictest drug laws, found in Scandinavia, lead to the most overdose deaths: 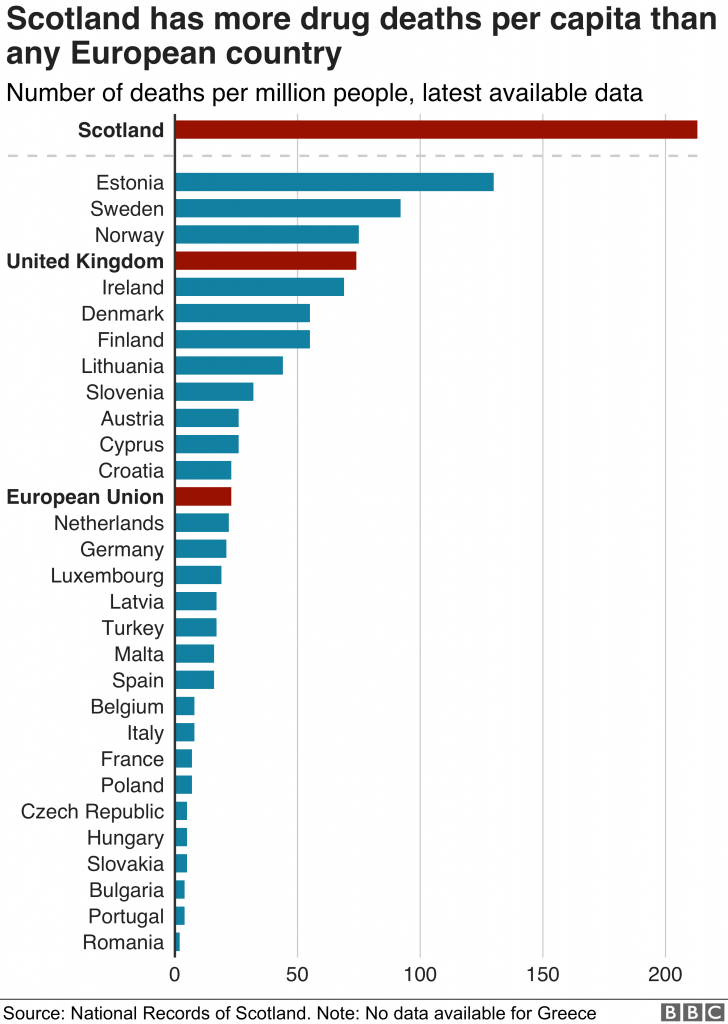 The only way out is through legalization. Cannabis legalization in the United States leads to a drop in suicide rates for men aged 40-49. It’s only when you have a wide range of safe legal substances available for people, that you can reduce the damage.

The big problem societies tend to run into, is that people grow addicted to a particular substance. Consider the charts above here. It looks like Poland, Czechia, Hungary, Slovakia, Bulgaria, Portugal and Romania have the problem figured out, right? Well yes, because we pretend that alcohol is not a drug. But take a look at alcohol related deaths and you see that the problem just moves elsewhere: 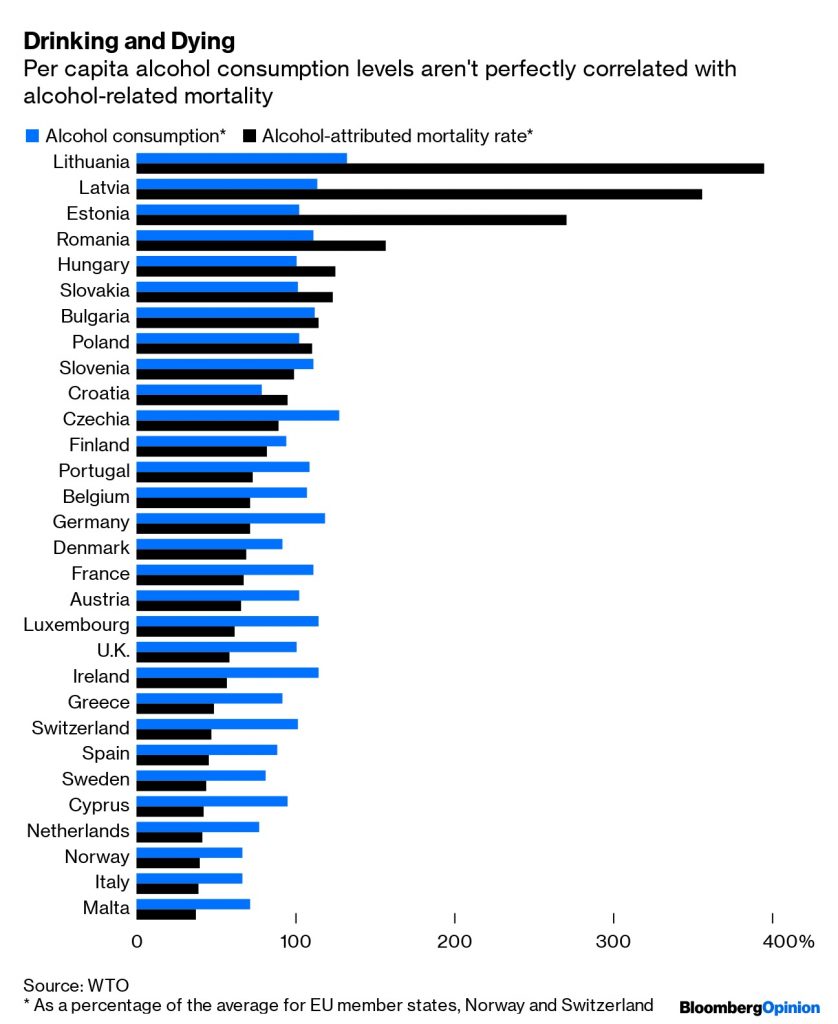 With legal cannabis, you prevent excess alcohol and opioid deaths. If you look at the DPH subreddits, you find a bunch of teenagers, who say that they wish they had some drug other than DPH. Those teenagers are going to die, because they have no alternatives available to a drug that will make them addicted and kill them.

In the “best” case scenario, where boomers completely succeed at keeping drugs off limits to their children until they’re adults, all the accumulated stress they have suffered tends to lead to adults who simply psychologically shut off from the outside world, as seen in Japan.

The best possible way out of course is to dramatically reduce the cumulative psychological stress that teenagers experience. The pattern after all, is very simple: With exposure to high cumulative stress, teenagers develop a high desire to take drugs. With exposure to little stress, the desire remains limited. Mental illness is about five times more common in today’s youth as it was in the silent generation.

Unfortunately we live in a society where academic stress is massive. The only thing parents care about is whether teenagers get good grades. If the teenagers don’t get good grades, the parents get upset, which imposes massive psychological suffering on the teenagers. The teenagers then impose stress on each other, exacerbating the problem.

The earlier stress is addressed, the easier it is to address it. Wounds that are buried deeper in the mind have become more integrated into the psyche and are more difficult to heal. In contrast, fresh stress can typically be addressed with cannabis. It’s quite common in the Netherlands for young adult men to smoke cannabis and then as they grow older eventually lose interest in all drugs altogether.

With excessive stress, or stress that has become deeply integrated into the psyche, for example traumas in childhood, cannabis rarely has the ability to deal with the problem and so we see progression towards other substances. As an example, people may move from cannabis to crystal meth, which is genuinely very dangerous. In other cases, there is no way out and people move towards Hikikomori or suicide. In the case of women, eating disorders are also a common response, because hunger itself is also a sort of drug: Your body’s sensitivity to dopamine is increased through hunger.

The solution is relatively simple. To start with, we need to reduce psychological stress in teenagers, by doing away with the zero-sum game of competition on tests to get into prestigious colleges. We need to make it acceptable again for working class parents to raise children who do working class jobs.

Unfortunately most working class parents can’t accept this, they insist their children must become doctors, lawyers and college professors. Often they succeed at this, but it simply means that migrants have to be imported, who have to perform the blue collar labor that needs to be done. Those migrants then expect their own children to become doctors, lawyers and college professors too, which causes the cycle to continue.

Additionally, we need to make it easier for teenagers to have access to safer drugs. Salvia Divinorum, Cannabis, Mescaline, 2CB, MDMA and Psilocybe mushrooms are relatively safe drugs, that can improve mental health. Today’s teenagers however, are instead stuck with stuff like DXM, DPH, nitrous oxide and other drugs that cause permanent health problems.

If the war on drugs had ended in the 1960’s, we could have avoided the collapse of our civilization, by breaking the cultural paradigm of domination and perpetual economic growth. Psilocybe mushrooms lead to a change in a person’s value orientation, away from materialism and authoritarianism and towards nature relatedness. Only psychedelics can break the cycle of domination and exploitation.

By now it is too late to avoid the collapse: We have insulted and outlawed the organisms that wanted to help us avoid the outcome our species is currently experiencing. Today’s generation of young people will live to witness the outcome: A planet that becomes inhospitable to agriculture, where ecosystems start to collapse and we eventually become incapable of feeding everyone, which will translate into billions of deaths.

However, this doesn’t change the fact that we still have rights. It’s unfair that the elderly wish to lock us all up in our homes to keep them safe from a virus and transform us into factoid-memorizing straight A students who end up doing bullshit office jobs for a few decades until we find ourselves faced with a planet that has grown inhospitable for our species.

Young people should have the right to reconnect to nature, to heal their minds and to avoid becoming victims of the exploitative societies they inhabit. If they don’t receive those rights, they will simply cause the collapse of the healthcare system: Psychologists can’t handle the waiting lists, doctors find themselves faced with nitrous oxide addicts with blood clots and nerve damage and the Benadryl addicts are becoming a generation that will suffer early onset dementia.

It’s quite easy to avoid this mess: Legalize and normalize the use of natural entheogens and make sure that people have accurate information about them.