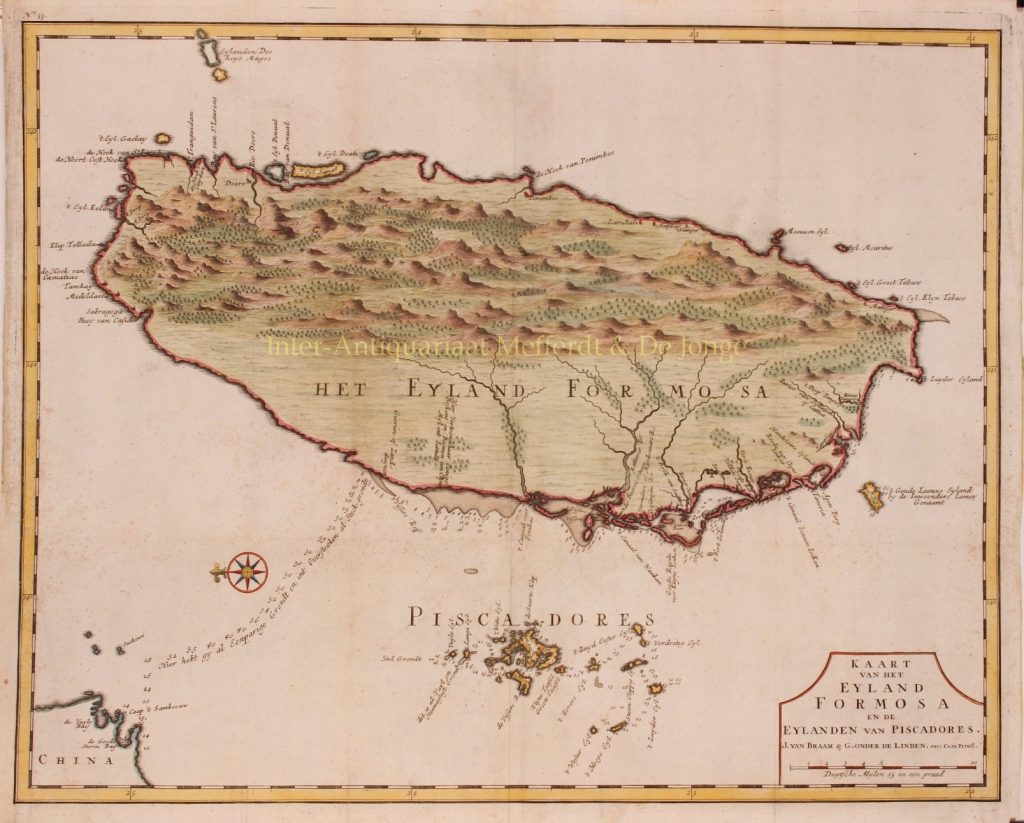 When the first Dutch settlers discovered Taiwan, what was then called Formosa, they discovered a peculiar indigenous culture, which had customs that were unlike any the Dutch had ever encountered. The Dutch Catholic Priest Gerardus Kleywegt (1599-year of death unknown) is known to have recorded some of their ceremonies for the sake of helping other members of the clergy in any future attempts to convert these heathen people, should such opportunity ever arise.

In Kleywegt’s period on the island they were fiercely hostile to any attempts at introducing the gospel and the Dutch had no strong desire to convert the heathens, so Kleywegt is known to have limited himself to documenting their culture. For the sake of preserving this knowledge for future generations, I have decided to document his experiences through some of his notitions, here on this blog.

Kleywegt encountered a people who called themselves “Tarawag”. This name means something akin to “kin of the forest”, or “friends of the forest” in their language. They did not know where they originate from, they have no surviving legends of this kind. They know that they live on an island, but as far as they know this island is their place of origin and they have entirely no idea what takes place outside of the island.

They think this happens slowly, as their souls incarnate from one animal to another. They think you can generally see in most people that their soul derives from a particular animal. The black bear likes to be on his own, so those who enjoy being alone are thought to have been bears. The macaque likes to fool people and steal their food so those who are deceptive and enjoy making jokes are thought to have been apes. Finally they have encountered dogs and so they believe that those who are very social were originally dogs.

They believe it to be the intention of the plants, to create this whole world, with all of the animals. The plants however can only make very simple animals, like worms. It is the task of the animals themselves, to grow ever more advanced and complex. This is why they believe the animals mate with each other: So they can make new, better animals.

The Tarawag practice no hygienic measures and know of no purification rituals or anything similar of that nature. Rather, the Tarawag appear to glorify disease. Those who cough are kissed, mucus from the nose is readily ingested by other members of the tribe. The Tarawag see disease as a test from the trees, that is necessary to keep the forest healthy.

And so to the Tarawag, fornication is effectively seen as a citizen’s duty. Rather than condemning promiscuity, the Tarawag venerated it as a virtue. They had no known marital rituals and women commonly competed, to seduce more men. Kleywegt himself had to fight off offers of women who said they wanted to become his wife and whispered in his ear that they would convert to his alien religion.

However, there was one exception, a ritual that could be thought of as marital in nature. It is what the Tarawag called the Eternal Cult of Youth. They insist that this phenomenon has existed since the creation of the world by the trees, their people have practiced it as far back as they can remember and believe it was instructed to them by the trees.

Other tribes too have apparently learned of this phenomenon, it’s not uncommon for young people to show up from far away tribes, who manage to reach the Tarawag who otherwise live in relative isolation. They are welcomed as guests, although it is custom that these foreign tribes have to bring gifts. They are expected to bring dried seaweed among other things, which the Tarawag see as a delicacy from the sea.

The Eternal Cult of Youth is akin to what you might consider the Olympic games, but the difference is that this cult has a grand prize: The entire tribe reduces itself to slaves of those who win this competition. The competition begins late in July and lasts until early August. The competition involves only healthy young men, older men generally cease to participate. Participation requires an up front cost, in the form of offering a number of mushrooms that are stored in honey for other members of the tribe.

Unhealthy people were almost non-existent among the Tarawag to the horror of Kleywegt, who feared these people practiced infanticide on a large scale. There were those who became sickly during long fasts, which was held in high esteem, but deformities and the like seemed genuinely non-existent. Overall, the Tarawag surprised Kleywegt in every aspect of their being.

They were taller than him, he says that his eyes generally reached up to their chins at most. They were also more muscular than him. Most perplexing, they seemed to age slower. Kleywegt remarks that he couldn’t tell the difference between those who were said to be twenty and those said to be forty. There were men and women who claimed to be over a hundred years old. A highly pregnant woman insisted she was sixty-four years of age.

Then during the evening and night a competition was held, where the men were given an odd task: They were to catch a live bat. Boys were taught from an early age on about the various techniques that can be used to capture a bat. There were those who made nets, others made small cages, many learned to sneakily climb into a tree. Many could not pull it off however.

By the time the sun had come up, a tribal elder would inspect who had brought a live bat. Those who had managed to do so would enter the next stage of the competition. Now they were made to engage in a series of games. They played a board game that apparently resembled Go. Card games and gambling games were also played, as well as various puzzles. Coloured pebbles were won and lost, many men won pebbles by betting on other men’s victories. This lasted for days, the rules are opaque and not properly documented.

Ultimately, the whole tournament was left with four men who were proclaimed victors of the competition. These men were now asked to vote, on who they considered the prettiest woman in the tribe. This was of course a huge honor and young women were eager to be chosen, even before the competition began they were eager to befriend men they thought would have a chance of winning, in an effort to influence their vote. As far as we can tell, the men generally voted unanimously, there was no need for a tie-breaker.

What would happen next is that the four men and woman were sent off to an island close to the coast, near Sanxiantai. On this island, they were to have children together. About once a year, someone would come to collect a newborn child, this child would be taken back by the tribe, where other women would serve as wet nurses and take care of the child. This lasted until the woman had spent three years in a row without giving birth to a new child. This would mean the start of a new competition.

The children taken home from the island were seen as the equivalent of a royal family. They were tasked with organizing massive parties every summer, including the kind of parties that would precede a new competition. The children were held in high esteem and generally had a lot of children of their own, the women generally had wet nurses. It was also not uncommon for these children to have offspring with each other as adults.

This phenomenon went on every generation, to the point where most members of the tribe were generally descended from winners of the competition. Over time however, stranger things began to happen. The men had grown attracted to each other. It was known to all that fornication took place on the island off the coast, but what might not be immediately obvious is that to a large degree, the men lusted after each other. It had grown common for them to try to seduce each other, because this would then allow them to mate with the sole woman on the island, without having to share her for the night.

Among the tribesmen and women back home, this had also grown commonplace. Men generally preferred each other over women, women generally preferred each other over men. The men glorified masculinity, the women glorified femininity. Because the people here had grown to be healthy and beautiful, it was common for aristocrats from surrounding tribes to seek spouses among the Tarawag.

Over time, indigenous tribes began to see the Tarawag themselves as a forest nobility of sorts, too sacred to be bothered with worldly affairs. The Tarawag were concerned with delivering heavenly perfection to the Earth, this is how they saw their own task within the cosmos and other tribal people generally agreed on this.

What even fewer people know however, is that according to Tarawag mythology, in another branch of reality, the Tarawag had failed to obey the customs delivered to them by the trees. Here, the Tarawag did not spread disease, they were terrified by it. Those who were sick were sent away from the tribe. Those who had strange eating habits, like the consumption of raw oysters, were also sent away from the tribe. The Tarawag had grown afraid of their own and each others bodies. Sodomy was seen as a great vice that spreads disease, it was punishable by death.

Over time, here the Tarawag began to decay and degenerate. Every generation they grew skinnier and shorter. Muscles withered away, people grew unable to run or carry heavy rocks, their bodies were struck with pains and aches if they were to try such a thing. Childbirth grew into a painful and even dangerous condition, so women now sought to avoid it.

People began to take pride in deviating from good health. Men accentuated the bald spots on their heads or showed off their lack of pectoral muscle, women glorified their bloated bellies. In highest regard were held those, who were completely helpless against disease. It began to be seen as virtuous, to protect your mouth and nose with a garment, signifying that people should not approach you, lest they be guilty of murdering you. People saw no need to have healthy children, they just sought to fill the world with more people, until eventually the trees began to die and the Tarawag spent their remaining days in pain, fear and suffering.