For the past few months, the Netherlands has had a big wave of BA.1 Omicron, that has caused a lot of people to get infected. The number of deaths and hospitalizations was very low however. The government had implemented a complete lockdown, but it won’t shock you to hear that this had no real impact on the wave.

So what led to the low death and hospitalization rates then? This is quite simple: The elderly had received boosters. The boosters offer some protection against infection and because the elderly mostly mingle with other elderly, that’s sufficient to keep infection rates low. You can see the infection rates here: 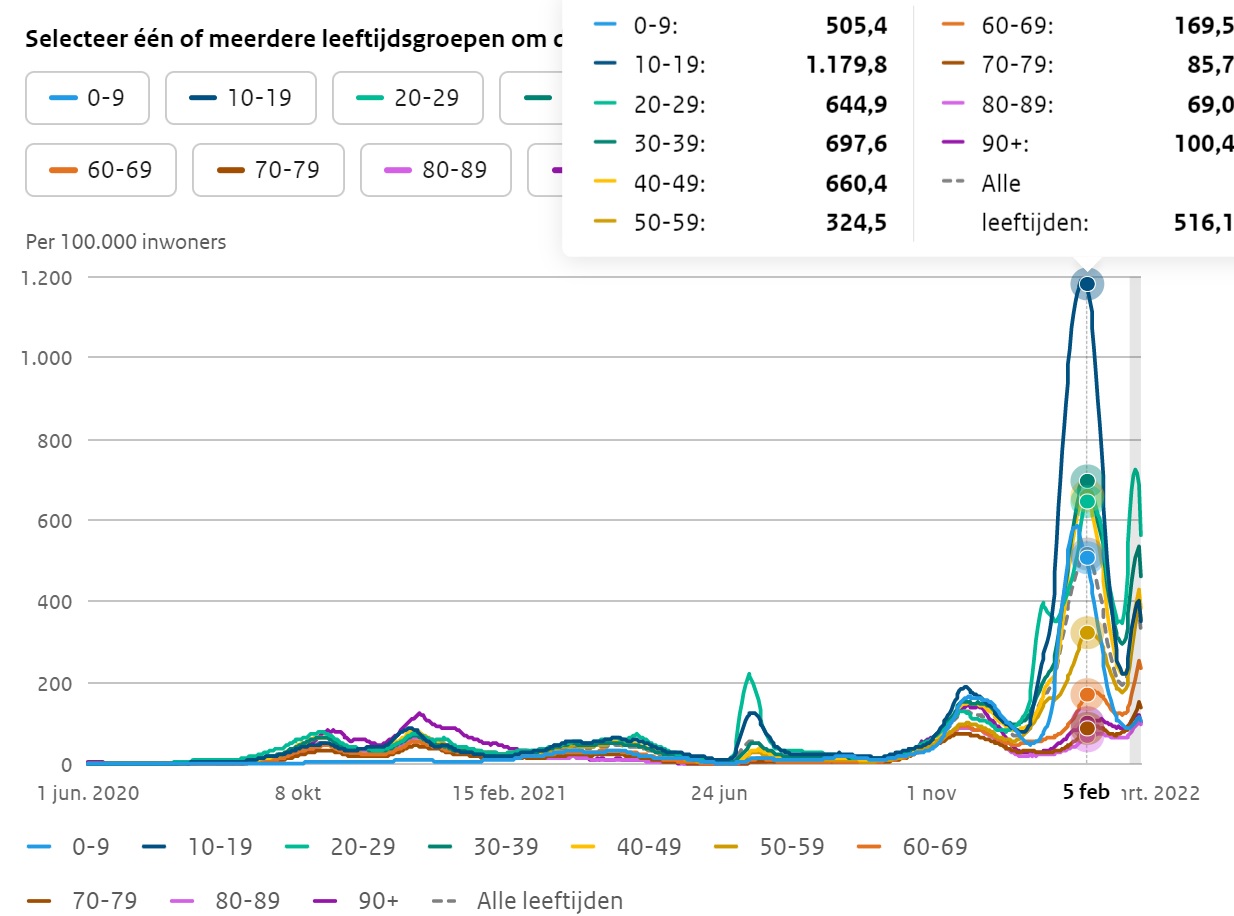 Unfortunately however, constantly injecting people with an old version of the Wuhan spike protein to protect them against new variants is a poor bargain. Here’s what happens:

And that’s for example, why you saw a pattern of deaths in Israel that’s very different from most Western nations: 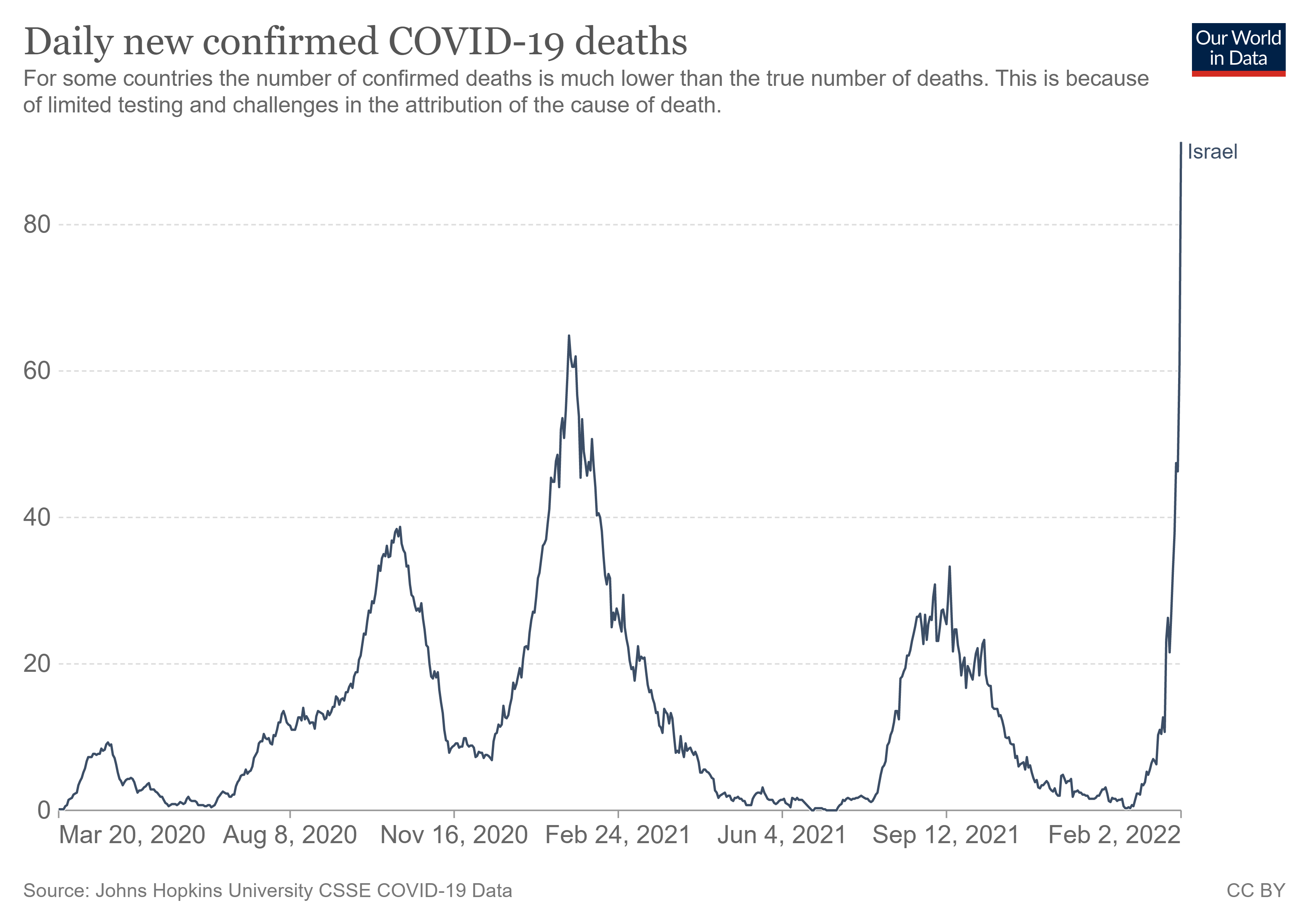 Once Israel was hit by Omicron they were already in the stage where the effect of the third shot had started to wane. And thus all these people who had received three shots had to deal with this infection with an antibody response characterized by a decreased ability to adjust to new variants, like Omicron. The Israeli government responded by giving the elderly a fourth shot, which kicks the can down the hall for another few months.

Meanwhile, Israel is unique among the world’s nations, in the degree to which Omicron begins to evolve to overcome the vaccine induced immune response. There’s a variant now showing up in high rates in Israel, that’s not really showing up anywhere else, BA.2 with 346K. This is a variant we would expect to have an extremely strong ability to escape the Wuhan spike antibody response, much greater than anything we’ve seen before.

I can’t sufficiently emphasize, how stupid it is to constantly vaccinate people with the exact same Spike protein. It’s asking for a disaster. The evidence should be very clear from Israel, where deaths from the supposedly much milder Omicron variant exceeded deaths from the Delta wave.

The Netherlands is now planning the fourth round of injection with the Wuhan spike protein, so now we’re going to see two things:

We have actually seen something similar to what we’re now witnessing with SARS-COV-2, the failed Dengvaxia experiment in the Philippines, where children died after receiving an experimental vaccine against Dengue.

They gave a bunch of kids a vaccine against Dengue, then the kids who had no exposure to Dengue before receiving the vaccine began dying.

Let’s look at the numbers. A total 0f 800,000 children were vaccinated beginning in april 2016 and lasting until the end of 2017. Out of these children, 100,000 had no previous exposure to Dengue and thus suffered original antigenic sin imprinting, prohibiting them from generating a proper immune response against other variants of Dengue. This problem was only discovered in November 2017.

The program was stopped in December 2017, 12 deaths from Dengue were confirmed in these children. By September 2018, they were looking at 19 dengue deaths.

By June 2021, the 165th victim whose death could be linked to the vaccine was recorded.

So, if we just take the Dengvaxia experiment at face value, the deaths become apparent about one and a half year after the program starts. Then it takes about another year, before deaths genuinely begin to start piling up. If you want to dive into the details, there’s a model here that you can look at.

This is effectively giving you a glimpse at what you should expect in the coming years. Experiments like the one we have engaged in against SARS-COV-2 take some time to reveal their impact.

Of course what we did is much worse than the Dengvaxia experiment. We have engaged in a global mass vaccination experiment, which changes the evolutionary dynamics of this virus to a degree that SARS-COV-2 becomes forced to genetically adapt to this newly created niche. In that sense, there is no proper equivalent.

We can see some dynamics similar to those of homogenization of the immune response from mass vaccination in this study on the impact of viral adaptation to specific MHC genotypes in inbred mice. Virulence becomes much higher in mice with common MHC genotypes to which the virus has adapted than to rare MHC genotypes.

It’s not very hard to see what’s happening, I’ll divide it into a couple of different points:

-Neutralizing antibodies against SARS-COV-2 make it harder for someone to get infected and for them to pass on the infection.

-Versions of SARS-COV-2 that mutated to overcome our neutralizing antibodies are thus going to have a transmission advantage.

-The ideal transmission advantage would be seen if all of your neutralizing antibodies became useless.

-Your neutralizing antibodies don’t just obstruct viral transmission from one person to another, they also make the difference between a nasty cold and a life-threatening infection.

-By vaccinating everyone multiple times with the exact same Wuhan spike protein, we create a situation where everyone has very similar antibodies against this virus.

-This process of mass vaccination enables a variant to come into existence that overcomes all of our neutralizing antibodies.

-Such a variant would be both highly transmissible and highly lethal.

-We’re now in a situation where just two out of 19 monoclonal antibody therapies work against the new dominant variant, BA.2. Your own vaccine induced antibody response will similarly face massive antibody evasion from BA.2 and we should thus expect that we’re quite close to witnessing the emergence of a variant that is going to cause a mass wave of infections, severe illness and death.

Here you can see infection rates in Dutch elderly: 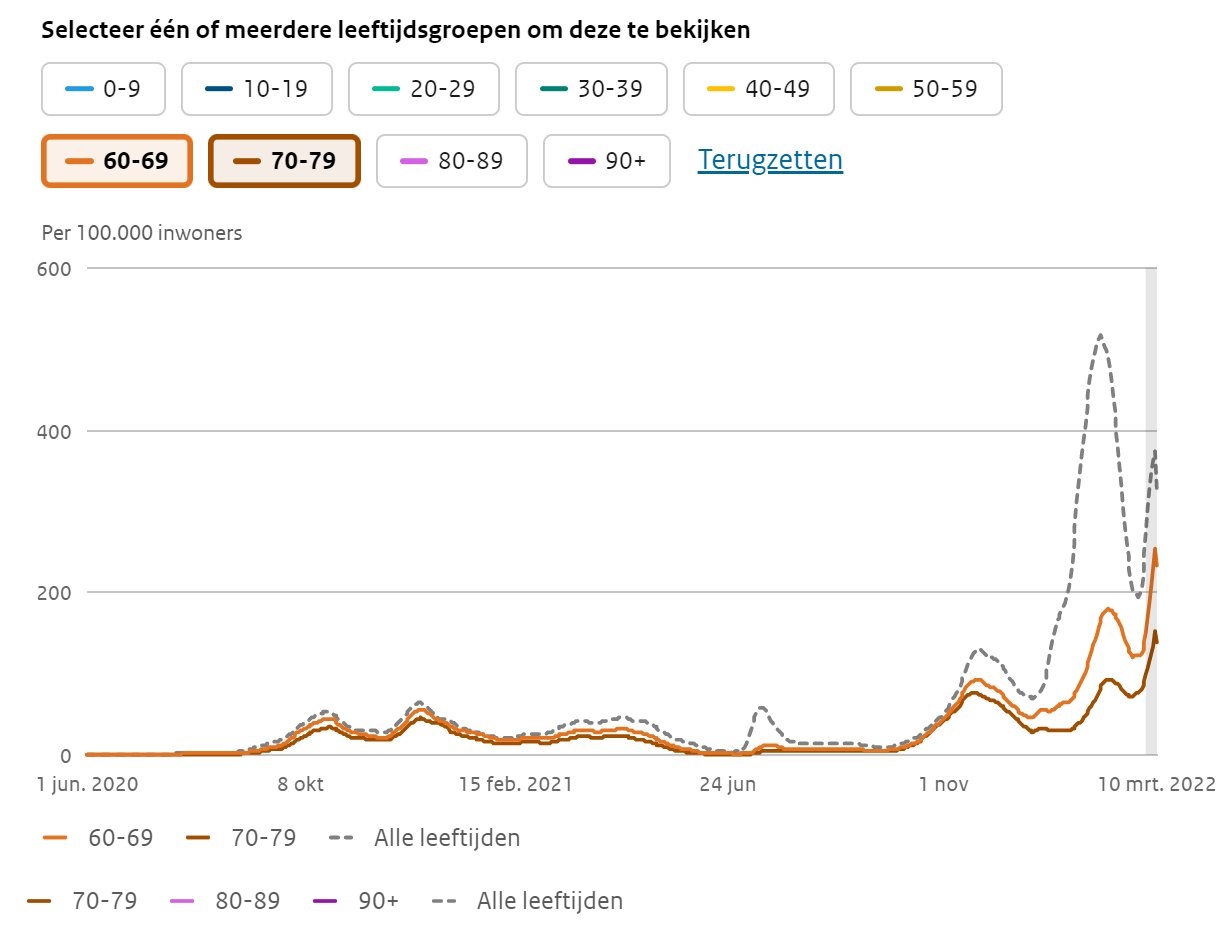 Infection rates in Dutch elderly are now five times higher than the previous winter’s peak. Unless you expect that natural immunity, vaccine induced immunity and the hypothesized mildness of Omicron will somehow reduce the risk of hospitalization per individual infection by 80% or more, hospitalizations will exceed what we saw last winter.

It could of course be that I’m missing something, that some deus ex machina will now show up to avoid mass hospitalization and death, but I honestly can’t think of something. If you think there’s some silver lining I’m missing, be sure to let me know in the comments.