So, the European Union is now starting to hint that they get to decide how they wish to alter your body. The EU commission president says that the EU must consider mandatory vaccination.  When they go ahead with this, they effectively declare your body to be their property. They are now the ones who get to alter it in whatever form they wish, not you.

The alterations are permanent, there is no real way to reverse these alterations. You can’t “unvaccinate” someone. You can theoretically deploy a bunch of synthetic drugs to deplete the immune system of all of its B-cells, but it can hardly be considered practical or safe.

In Austria they already implemented this, in Greece they’re simply placing an extra tax on the elderly who refuse to get it. They really wish to go this route. The reality however is that they can’t. They can’t force you to take this vaccine. At least they can’t, as long as you don’t let yourself be bullied into taking it.

Here’s why. Austria has two million uninjected people. They also have 8180 prisoners, with their prisons 95% full. Assuming they don’t release any prisoners and people continue to commit crimes, they can throw a total of 422 “anti-vaxxer anti-science conspiracy theorists” in jail. That’s about one in every five thousand “right-wing populist science-deniers”.

The Netherlands has room for about 4000 more prisoners right now. I can guarantee you, there are more than 4000 “wappies” in this country. The other thing to keep in mind, is that their gene therapy has to be continuously administered for it to prevent infections. In the United Kingdom, they’re now moving to one booster every three months. You’re dealing with millions of people who never got the vaccine, but you’re dealing with an even larger population of people who won’t get the booster.

They have no way to enforce this vaccination mandate, as long as you stick together and don’t defect. If you’re old and you were offered this vaccine back in February or March or so, I can understand your logic. Back then it appeared to me as if this vaccine would genuinely protect people against this virus, now it’s clear it doesn’t. If you’re young and you’re now thinking of letting yourself be bullied into taking this shot, you’re an idiot.

Who wants to take an injection that has massive side-effects, needs to be administered every three months, is supposed to protect you against a virus that doesn’t really affect people of your age, still needs to be administered according to the government even if you’ve already had the virus and most importantly, doesn’t even prevent you from getting infected with the virus and infecting other people with it? Why would anyone sign up for that, especially in a context of unexplained excess mortality among young people?

Keep in mind, these people know what they’re doing. They have this problem, people who won’t sign up for their quarterly gene therapy subscription model, and they’re biting chunks off bit by bit, starting with the easiest chunks. First you make the unvaccinated second class citizens, who are not really allowed to do anything without constantly having PCR’s shoved up their nose that remove your mucous layer and make you vulnerable to respiratory infections. A bunch will be bullied into taking the shot like this.

Then eventually they make it exceedingly difficult for you to hold onto your job. That bites off another chunk of the population, so then finally they start handing out fines. Perhaps first to elderly above sixty, because all these measures need some broad consent from the population. The measures themselves however have the effect of normalizing the next measures they come up with.

And so finally, there are just a handful of us left, who were willing to cough up the fines, quit our jobs and just sit inside our homes all day, utterly unable to infect anyone with this virus. They will still see us as the cause of this pandemic, because they’ll have a bunch of prematurely balding skinnyfat myopic “scientists” who will shit out models on demand implying it’s all our fault, so they will eventually simply come round us up and throw us all in jail. That’s difficult, because they don’t have enough jail capacity, so they chew off small bits of the problem at a time, until there are few enough of us left to enable these totalitarian measures.

In the meantime they’ll come up with increasingly ridiculous explanations to explain all the excess mortality happening everywhere. At first you were just not supposed to notice the epidemic of soccer players dropping dead on the field. Then it was coincidence. Now it’s no longer coincidence, now it’s due to COVID:

Covid infection is more likely than the vaccine to cause heart problems in footballers, leading scientists say https://t.co/pTiPH6aAaC

I mean, if this is the level of propaganda people will swallow, the excess mortality statistics are not going to bail us out either. If excess mortality suddenly doubled across Europe tomorrow and people began dropping dead of heart attacks like flies, the normies would say “gee this Omicron variant is really nasty, we need to vaccinate that last guy holed up in his house with a pile of stored food and a loaded crossbow aimed at his door, once we vaccinate him the R will drop below 1 and this virus will go extinct”. 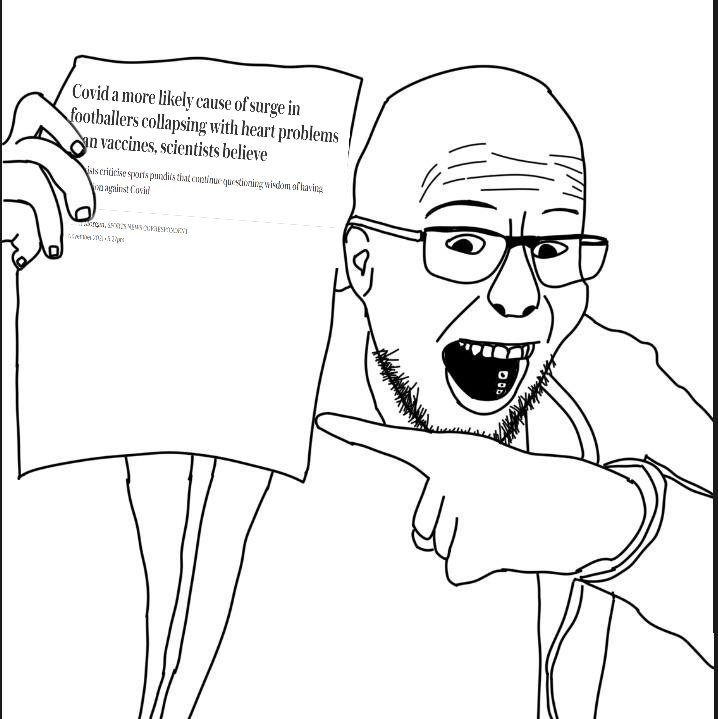 Once you buy into a narrative like this and signed up for it by injecting this stuff into your arm and arguing in defense of it to your peers, there’s just no way out. You have to be prepared for the unfortunate reality that almost nothing will probably change most of these people’s minds. They’re fully committed and they will go down with the sinking ship, the vaccine that doesn’t protect against infection, doesn’t reduce excess mortality and needs to be administered again every three months.

Subjecting you to any sort of medical procedures in active violation of your will is violence, I don’t care what the procedure is. When your government officials threaten you with violence, it’s time to defend yourself. Buy weapons and be ready to flee your house at a moment’s notice.