Anthropocentrism is the notion most humans carry, that a human being is the most important lifeform in the universe. It’s the idea that there’s something fundamentally special about us. This worldview is of course more compatible with Abrahamic religion, than with the findings we have made in the past 200 years.

And as time goes by, we merely find more evidence that points in this direction, of humans just not being that fundamentally different from the other animals. You could find Young Earth Creationists who insisted than Neanderthal man was just some regular guy who suffered a growth hormone disorder. But today we have sequenced genomes and we can find the traces in our own genome. About a quarter of all Neanderthal genes are preserved in present humans. Denisovan has left his legacy in Oceania and in sub-Saharan Africa, people have inherited a number of genes from yet another close relative to our species.

Today it’s easy to draw a strict line between human and non-human, a simple fact that many human ideologies and religions have happily made use of. But if you had been born earlier, it wouldn’t be so easy. There was an era once when Homo Sapiens was just a species of Homo among many. And had things gone a little differently, had our sister species survived on isolated islands, all our anthropocentric notions of “human rights” would have looked even more arbitrary than they look today.

The small human relatives of Flores in modern day Indonesia, who stood 110 centimeters tall are thought to have survived until at least 50,000 years ago. Then the humans showed up and seem to have rapidly exterminated them, as we did with so many other species. But imagine if they had survived, this species much smaller than us. Imagine we can’t communicate with them and can’t reproduce with them.

Do they have “human rights”?

Are they treated as wildlife? If they risk overpopulating the Flores wildlife reserve, do we sterilize them? Do we shoot them? Do we just allow them to overpopulate their niche and go extinct?

Do we intervene, when one of them kills another one, or tries to rape another one?

How do you treat an animal, that threads the line between human and animal?

We don’t really have an answer, we ended up with a system that happens to work by accident: It lucked out in the fact that it never had to deal with the reality of an organism that exists somewhere between the arbitrary boundaries of human and non-human.

And if you look around you, you’ll find that our whole society operates on the notion of this arbitrary boundary having some sort of validity.

No, you have to be both innocent and human. The innocent part is easy to understand. It’s the human part that’s arbitrary. If I were an animal, carrying an elephant or a gorilla fetus in my womb, nobody would lose sleep over an abortion. But a human being is special. This happens as soon as conception takes place. I’m allowed to let my sperm cells die, but once a sperm cell fertilizes an egg, we treat it as sacred.

To back up this mentality of treating fertilized eggs as sacred, we came up with another concept: The idea that a soul enters the egg as soon as it is fertilized. This is of course also arbitrary. It means millions of souls around the world enter eggs every year, only to head back to heaven within a few days, once the fetus is spontaneously aborted. In fact, compared to the fetuses “murdered” by pregnant women, we would find vastly more fetuses who were murdered by God, burdened with the curse of inhabiting embryos with chromosomal abnormalities and other misery.

And most arbitrarily of course, is that fertilized human eggs sometimes turn into twins, triplets or even quadruplets. One has to wonder: Do these fertilized eggs harbor multiple souls? Or can a human soul split? If so, it means that humans can split human souls, as it’s relatively easy medical procedure to split a blastocyt and end up with identical twins.

–Mice with humanized genes that increase their intelligence.

–Pigs with ten gene changes, to make them more suitable for transplanting organs into humans.

In all these cases, we’re not blurring the line between human (has rights) and non-human (has no rights) because we want to. Rather, we’re blurring the line because it is an inevitable requirement to accomplish a secondary effect that benefits humans. If we want to save lives, we need donor organs. Donor organs can be most easily produced by using some sort of genetically modified animal.

The religious conservatives get very uneasy with this sort of stuff, it terrifies them. On the other hand, the scientists themselves try to follow all sorts of ethical protocols, to avoid running into the nightmare that frightens all the anthropocentric humans:

God forbid we make a human being suffer the sort of indignities and cruel suffering we impose upon animals!

Or even worse perhaps:

God forbid we end up with an animal that receives the sort of rights we only grant to human beings!

All the science performed today, is performed while taking great care that the fine line between human and non-human, that came into existence once our ancestors exterminated our closest relatives, is preserved. We take every effort, to maintain our arbitrary separation from the other animals, that our ancestors themselves created through acts of genocide.

It fundamentally is not hard, to blur the line between human and non-human again. Humans and chimpanzees are more closely related than donkeys and horses, which can produce fertile offspring. A billionaire could produce a human-chimpanzee hybrid. The human-chimpanzee hybrid could then have offspring with a human being. How do you humans plan on treating someone who is 25% chimpanzee? How about someone who is 75% chimpanzee? Do you grant them voting rights? But people fundamentally don’t want to do it, they are happy to maintain their arbitrary line, their domination over the entire biosphere.

And the reason I’m asking, is because it’s already abundantly clear that intelligence or the capacity to suffer, just fundamentally doesn’t matter to you. Your domination, your privileges, are bestowed on you by virtue of being human. Just look at how you treat the other intelligent animals:

-You nearly drove the whales into extinction

-You shoot elephants for fun

-You use chimpanzees for medical experiments

-You rob orangutans of their home, to grow palm oil

And as long as your anthropocentric vision of the world continues, you build hell for yourself and all the animals you don’t consider deserving of rights: 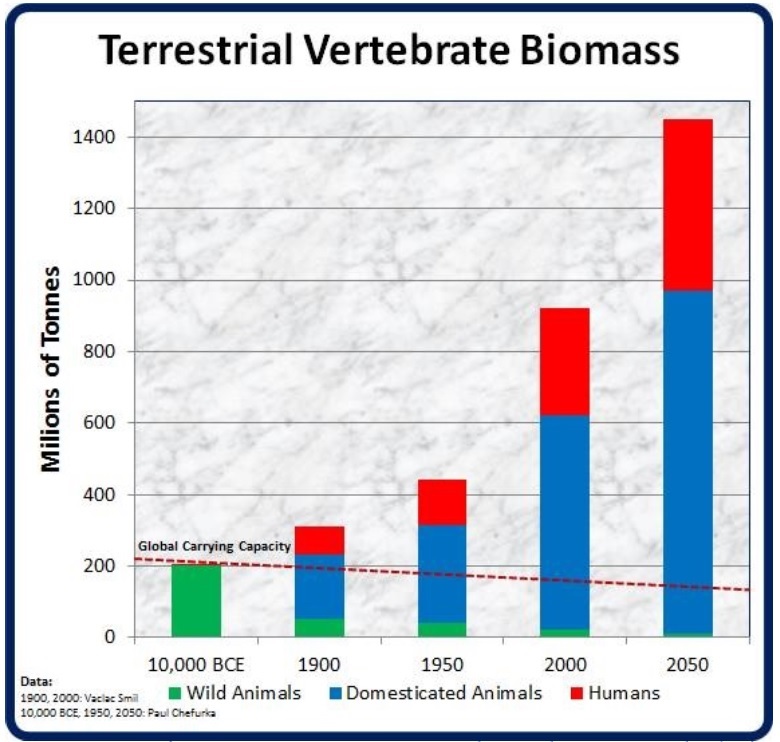 -You continue to burden our planet with ever more humans. Women become pregnant and find themselves forced to bring more humans into this world, even though they don’t want to, simply because you pretend that an embryo without a brain should have rights, even though you grant no such rights to an elephant.

-You continue to force our closest relatives into extinction.

-You continue to cause massive suffering for the animals you eat.

Because fundamentally, you just refuse to consider the possibility that something non-human could experience feelings.

Of course you’re also good at training yourself to perceive the world in this way. As humans, we can train ourselves to grow our empathy or to shrink it. Historically, we dehumanized slaves and victims of genocide. Through dehumanization, we prohibit our empathic instincts from firing. Hunters do something similar. They have a whole dialect that serves to prohibit their empathic instinct from firing for the animals they shoot.

And fundamentally, this happens because you refuse to recognize the absurdity: 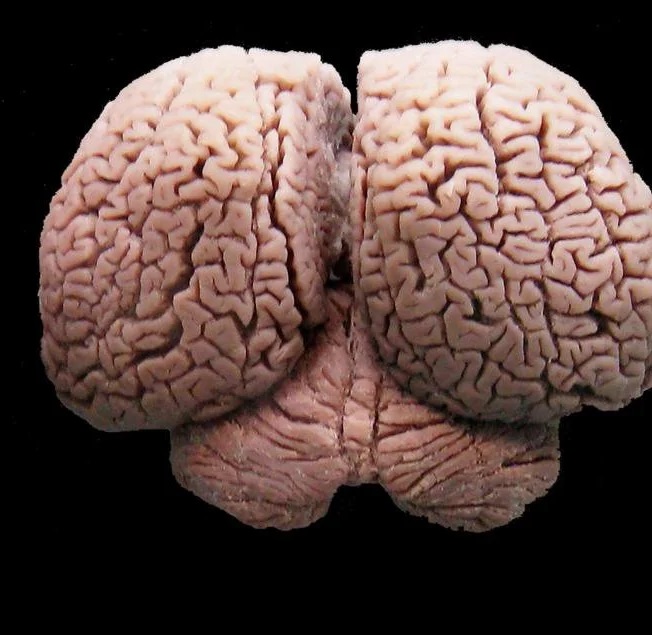 Here you see the brain of a dolphin. This is an animal that humans will happily kill. On the Faroe islands, people will readily kill numerous dolphins every year. Nobody interprets this as genocide. After all, it’s not our species.

On the other hand, humans consider it murder to remove a blastocyt from a human womb that doesn’t have a functional nervous system yet.

And of course, to a large degree this whole problem can just be attributed to most people not being very smart.

“Abortion is killing an unborn child” Is the kind of oneliner that easily gets dumb people on your side, because it sounds right. If you have to get into the complexities of why humans should have rights, what rights non-human animals should have, what a fetus can feel, whether fetuses are spontaneously aborted, most dumb people drop out.

To have legal abortion requires the kind of intelligent decision-making class that Western societies are rapidly losing. On the one hand there are the Democrats, who represent the interests of people who have to deal with the risk of becoming pregnant. On the other hand there are the Republicans, who represent the interests of people with a socially conservative worldview. At no point in the whole process, does anyone bother asking the question:

Why do we pretend that a human embryo is so special?

The anthropocentrism underneath the whole “debate” is taken for granted by everyone who participates in the madness.

The whole notion of “human rights”, merely serves to emphasize that non-humans are not deserving of rights. Imagine if we had called the right to vote “man’s right”. It would be clear that we think of women as non-deserving of this right. And similarly, whenever we speak of a “human right”, we once again emphasize that non-humans are not entities with rights of their own. No, to us they are objects that exist for our benefits.

I would propose instead, that all rights should not be associated with your membership of some arbitrary biological barrier, but rather, should exist on a spectrum. The right to vote for example, should go associated with the ability to have an informed opinion on the subject that is to be voted upon and a personal stake in the issue. People who are about to die of old age should not have a say in climate policy, nor should people who don’t understand the fundamental basics of the subject matter.

Other rights, like the right not to be forcibly impregnated, should be extended to non-humans living in our society. Human beings will readily force farm animals and their own pets to have sexual intercourse, even though either animal may be fundamentally unwilling and actively resist. This should be illegal, as it violates a fundamental right of the animal in question.

And fertilized eggs, should have the same rights as unfertilized eggs, that is to say, none. We don’t hand out rights to totipotent stem cells that each have the individual capacity to grow into an adult human being. An organism that has never had a conscious thought or a feeling and never had the ability to express a desire, can not have its rights violated.

We can’t return to the bioethics of anthropocentric Abrahamic religions, because those ethical systems were a product of knowledge acquired before we discovered the arbitrary nature of the distinction between human and non-human organisms.

In addition, the natalist nature of these worldviews only made sense in a context of competing groups of people whose population density was fundamentally limited by the agricultural practices of their era. To continue bringing ever more people into this world, because we inherited a natalist worldview that came into existence in an entirely different context, is a grave mistake that will lead to widespread global suffering.