Have some music first and take a deep breath, because I’m about to feed you a very dark pill.

I’m the kind of person who changes his mind, when he is exposed to new evidence. At least, that’s what I like to believe. Compared to a year ago, the new evidence I’ve seen has led me to believe that this novel coronavirus is a lot more dangerous than it looked to me one year ago. I really wanted to settle on good vibes only, but I feel a moral obligation to warn you.

-Last year it looked like we had a good chance of reaching herd immunity. Herd immunity now looks impossible, this virus will remain with us forever.

-It first looked like it couldn’t properly spread in warm humid climates. It’s pretty obvious now this is not true.

-The scientific consensus is really that the new variants are more dangerous. Your chance of hospitalization for Delta is about three times as high as it was for the first variant, that’s what the available scientific evidence suggests.

-The vaccines are already failing, in the middle of summer. The vaccines never seem to have worked in Chile. In Scotland 87% of deaths are fully vaccinated.

-There’s evidence of genetic selection by corona viruses among East Asian people. If corona viruses were all hyped up flu viruses, you would not expect to see such evidence. East Asian hunter-gatherers had to survive for generations as corona viruses decimated their population. This is why China, South Korea, Vietnam and Japan have done pretty well in this current pandemic: It’s not the lockdowns, it’s mostly down to their genes.

-Lockdowns only make the situation better when they manage to completely exterminate the virus, they make it worse when they merely delay the spread, by encouraging the emergence of more lethal variants. We don’t know for sure if China managed to exterminate the virus with their lockdowns or if they are just lying, but they had tools available that we don’t: They welded people in their homes, they let people die alone in their homes, they have mass testing and they have a giant dystopian surveillance state. They also have a population that has genetic adaptations to fight viruses like this. By the time this virus left China, is started showing up in more susceptible ethnic groups, where it also rapidly evolved to become more infectious.

-The vaccines still deliver people some protection right now. The virus however simply changes, it loses the amino acids where the neutralizing antibodies can bind. When this happens, vaccinated people will just be left with binding antibodies. This will lead to a situation of antibody dependent enhancement. They won’t be able to mount a proper immune response against the virus, the immune response they do mount is one that will make the virus more dangerous for them. Vaccinated people are going to be in big danger starting this fall. The rest of us will be dealing with an explosion of variants, because the virus is forced to rapidly change its spike protein to survive in a vaccinated population.

-The vaccines damage your body. The spike protein is a toxic protein, you don’t want your own body to be pouring that protein into your blood stream because of a vaccine. The spike protein damages your Hematopoietic stem cells. Those stem cells are responsible for producing your white blood cells, thus there’s an effect on your long-term immune function to be expected too. Don’t take the vaccine. If you already took the vaccine, don’t take the boosters.

-Everything now suggests it’s pretty dangerous for young people too. That was not the case one year ago, it’s simply true that the new variant is more dangerous. From Australia:

There are currently 222 people with Covid-19 in hospital in NSW, including 54 in intensive care and 25 on ventilators. Of those in ICU, seven are aged in their 20s.

Seven of the 54 ICU patients are in their 20’s. That’s bad. Why do you think they have full martial law right now? Most of us already developed some immunity against this virus, so our bodies are somewhat prepared for Delta. In Australia most people have NO immunity whatsoever. They hoped to keep the virus outside until the world dealt with it, but that proved to be impossible. Now they have no immunity and they have to catch up with the rest of us, who already encouraged the emergence of new more dangerous variants.

-We saw a corona virus spread around the world back in the late 19th century, but this time the situation is much worse. When this virus first showed up in China, it was already perfectly adapted to human beings, because it probably came from a lab where they had this virus infecting mice with humanized ACE2 receptors. You can look at the amino acid homology pattern, this virus equally resembles human and mice proteins, because it evolved in humanized mice. This is not disputed by anyone: It looks more similar to mice proteins than it does to any other non-human ape’s proteins.

It has a synthetic furin cleavage site, a furin cleavage site that appears far more powerful than any of the furin cleavage sites in its relatives. Right now the most likely scenario looks to be that the virus got into the sewage of the Wuhan lab back in fall 2019, sewage workers got infected and then it began its conquest. More importantly perhaps, the human population is much more vulnerable now than it was in the late 19th century.

But most importantly, here’s the global death toll: 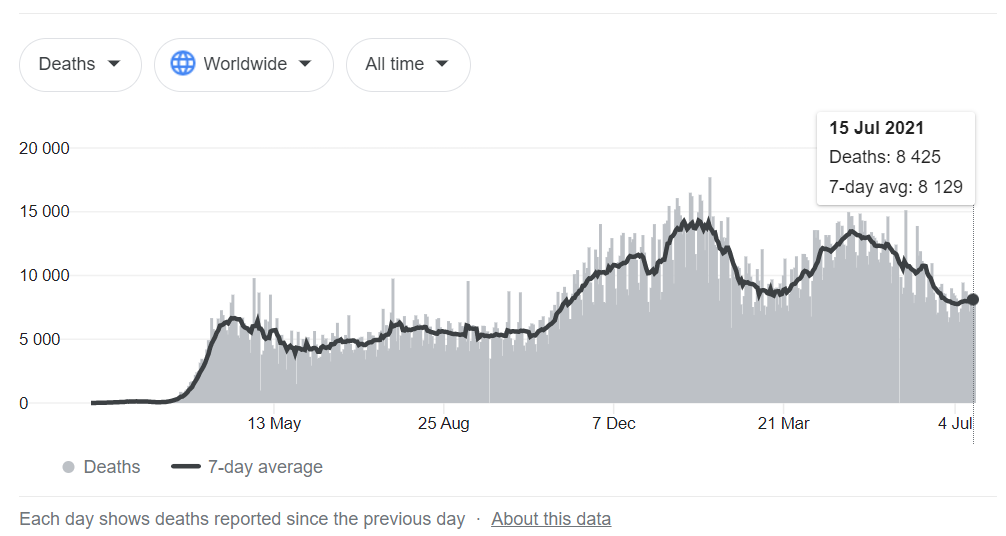 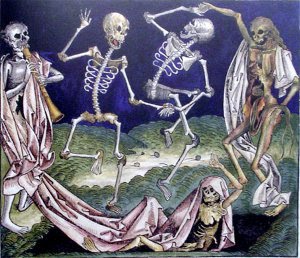 “Don’t say it’s not what you wanted…”

Yeah, this is the real deal. Sorry, there’s no point anymore in denying it. It looked much better one year ago, when half the deaths were nursing home residents and the average age of death was something like 82. But it didn’t go away, it keeps coming back, every new wave hitting younger and younger people. Immunity to corona viruses wanes after a while, because having antibodies and subsequently being infected with a different strain that uses those antibodies to its advantage means you’re dead. The antibodies are there to purge it from your body, not to protect you from getting it again.

There’s a spiritual explanation here that you have to consider. For all practical purposes, it’s a supernatural event, a curse we bestowed upon ourselves. You can’t see this separately from the global climate protests. Mankind refused to make peace with nature and so we unleashed her wrath. You fly around the world, burning as much carbon dioxide as an average African village does in a year, to take pictures of your feet on a beach for Instagram. You eat deformed chickens that have never seen sunlight, bred to explode in size so fast that they can not walk on their feet.

You can see in our era how men treat women. Men treat women poorly and so women start to think of themselves poorly. It’s woman’s nature to adjust to how she is treated. She will think of herself poorly and she will think of anyone who tries to treat her with respect as weak. They become addicted to abuse. Even when they stood up for Mother Nature we failed them. That’s how we invited God’s curse upon us.

Look at the recent outbreak in Massachussets, where 87% of breakthrough cases were in men, and 79% had symptoms. These were young people, aged 42 on average, so it’s not a case of the vaccine only failing in old people, it’s failing in everyone. As the virus starts hitting younger people, it will start mostly hitting men, because the hormonal differences are larger among young people and testosterone makes you more vulnerable to viruses while estrogen protects you. The reason it works this way is because a woman’s body needs to be capable of protecting a child in her womb.

We’re a failed ungrateful decadent species, a species that invited God’s wrath onto itself. As long as we fail to submit and surrender it gets worse and worse and worse, that’s how these things tend to work.

It’s an arms race. I would tell you “take vitamin D, Magnesium and Zinc”, but don’t you think practically everyone is already doing that?

You’re going to want to stock up on antivirals and fibrinolytics.

-Go to your local forest and harvest pine needles. Inhale the scent, make a tea from them. Put some lemon juice in there while you boil it, to help draw out all the good stuff.

-Garlic is an effective anti-viral.

–Stock up on Natto, or learn to make your own. It needs to be raw, live natto. If it has been heated it’s useless.

-Fisetin and quercitin look effective against SARS-COV-2. You can find these in any good supplement store.

-Vitamin B12 inhibits the virus too.

-Cannabidiol and THC reduce inflammation in your lungs, this can help to protect you against a cytokine storm. Terpenes can be anti-inflammatory and anti-viral too.

-Keep exercising. Practice jogging as well as sprinting. Your heart and your lungs are being attacked by the virus. Ask the maximum of your lungs and your heart.

Sorry, it’s the real deal. Stock up on food right now. Stock up on supplements with a long shelf life. Try being ready to treat your family yourself this winter. Death is hard. Death while you think “I could have done more” is worse.

And don’t say it’s not what you wanted. We manifested this.