I’m gradually running out of new things to say on SARS-COV-2, but there’s one thing I think is worth looking at. Here you have the results of the ONS infectivity survey, which estimates that one in every 11 Scottish people now has a SARS-COV-2 infection: 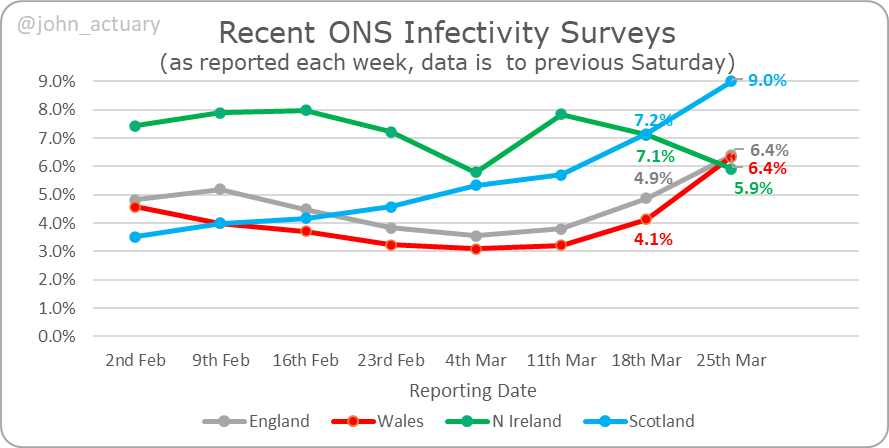 People are still being hospitalized, in fact Scotland now has record hospitalizations. Let’s look at the infection rate estimate from longer ago: 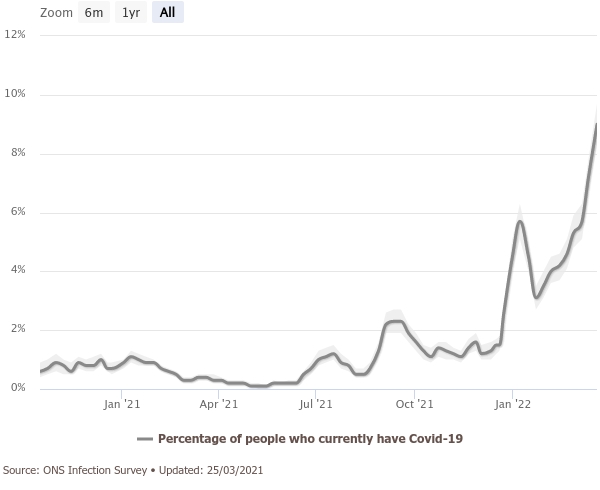 Today you have nine times as many people with COVID-19 as you did during the peak before the vaccination campaign. And in case there’s any doubt as to what causes this mass infection, we can just take a look at case rates by vaccination status in England: 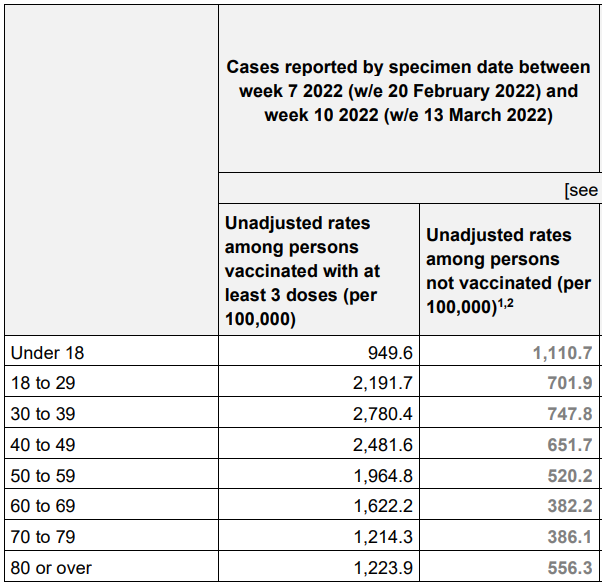 A non-sterilizing vaccine deployed to the whole population in the middle of a pandemic is a great way to turn a disaster into an existential threat. We have all installed the same new lock on our doors, through natural selection this virus is now trying to figure out what the perfect key is for this new lock.

We’re now in a bizarre situation, where everyone wants to pretend that everything is normal again. The new current thing is Ukraine, you’re supposed to forget this whole pandemic ever happened and if you bring it up again, you’re now the weirdo. In February, the Netherlands had the highest people home sick since march 2020, at 5.5% of all employees. Doctors have gotten much better at treating patients and everyone has had some exposure to the virus, so deaths are much rarer now.

A reinfection is generally less deadly than a first infection, but there is unlikely to be a further reduction in mortality from third and fourth reinfections. The reduction seen so far is as good as it’s going to get, unless we see new better treatment options. In fact, there is some reason to believe reinfections will get worse, as infections kill naive T cells.

Deaths from SARS-COV-2 generally don’t look the way they used to look anymore. South Africa’s deaths following their Omicron wave suggested the average delay between infection and death has increased. Late complications like strokes are now responsible for a larger share of the death toll. Often the death takes place more than thirty days after infection, so they’re no longer recognized as caused by the infection.

Among the elderly, many of the frailest most vulnerable people have already died from this virus. What I would recommend to see what’s going on, is to look at excess mortality in younger categories. Here you can see excess mortality as a percentage, in young American adults:

It becomes elevated in march and then it never drops back to normal. These are people who would have had decades of life expectancy left. Some will be opioid overdoses, which increased massively once the lockdowns started. Some deaths will be directly vaccine related. Others are long term population level consequences of the vaccination campaign, in that vaccination has been followed by a massive unprecedented wave of infections from this virus.

It’s not just the United States either. Europe is still witnessing massive excess mortality in young adults, higher so far this year than during the last two years:

Some phenomena in nature display positive feedback. Global warming is a notorious example. As the planet warms, the changing climate damages the ability of our planet to store carbon dioxide in forests and soils. Obesity is another: As you start to weigh more, your ability to burn calories through exercise is affected. Unfortunately, SARS-COV-2 has something similar going on. It kills the T cells your body uses to fight off the infection. Time will tell how big of a role this process will play in the unfolding of this pandemic.

I don’t really see things getting any better, until governments and academics become able to acknowledge the basic principle that their mass vaccination campaign has made the pandemic much worse and has now caused a situation in which unprecedented numbers of people in highly vaccinated nations are constantly being reinfected. You can’t solve the consequences of mass vaccination, when you can’t acknowledge them.

Millions of people around the world are stuck with:

-Antibodies to the NTD region of the spike protein that merely enhance the infection.

-An Original Antigenic Sin response, based off the Wuhan spike protein

-Decreased breadth of the immune response, as a consequence of repeated vaccination with the Wuhan spike protein

Governments considered this virus enough of an existential threat to prohibit you from leaving your home. Apparently however, offering you some sort of vaccine that genuinely works, as opposed to constantly injecting you with something that has been shown to fail within weeks, is too much to ask.

The effect the mass vaccination campaign has had, is to homogenize our immune response against this virus at a population level. El Gato Malo has written a good piece about this here, Eugyppius and me have also written on this topic a few times. This homogenization of our immune response causes mutations to carry an overall fitness benefit that would otherwise have been hampered by those who had a different response to this virus.

I don’t think you need very esoteric theories of vaccine induced AIDS or global depopulation campaigns to explain what’s happening, as evidenced by the simple fact that Geert van den Bossche managed to warn us about it before it took place. It’s simply a virus doing what it does best: Making use of the fact that most people in the Western world are now stuck with a very similar immune response to an old version of the virus that no longer works.

The koala in Australia is unusually good at digesting a toxic plant, eucalyptus. The reason such a strange animal, that sleeps 20 hours a day and is very vulnerable to predators, could evolve in the first place, is because the eucalyptus tree dominates large parts of Australia’s surface. If Australia had the occasional eucalyptus tree, there wouldn’t be sufficient evolutionary pressure to adapt to metabolize this plant, to the cost of all other traits an animal benefits from having.

Similarly, with BA.2 we now have our own SARS-COV-2 variant, almost perfectly optimized to infect the highly vaccinated Western population. Where is Algeria’s BA.2 wave? Where is South Africa’s BA.2 wave? We’re its ecological niche, as evidenced by the 11% of Scottish people who are now estimated to carry it.

You should ask yourself, how much time your country’s minister of health spent, contemplating the long term impact of vaccination on the evolutionary dynamics of a coronavirus capable of reinfecting people. My guess is: Not a lot of time. The Dutch minister is embarrassed now, because some of his text messages were leaked, in which he discusses purchasing face masks from some scam artists who fleeced the government and now face legal consequences.

‘You can better have that Sywert inside pissing out than outside pissing in,’ De Jonge said in a message to his most senior aide. De Jonge was referencing highly critical social media messages placed by Van Lienden about the government’s mask purchasing strategy.

This is the level of competence you’re dealing with. The problem, as Bertrand Russel famously explained, is that these sort of people are confident. They’re confident, because they’re not very smart. Smart people tend to be full of doubt.

These people who rule you on the other hand, have brains rushing with dopamine, allowing them to hold fancy speeches and climb the cubicle hierarchy, but not exactly contemplate what’s going on here. Their concern is managing people and public appearance. There’s no grand strategic vision or overarching plan to anything that has happened over the past two years.

The sort of geopolitical discussions in regards to Ukraine that you have on Twitter with some anonymous dude with a Roman statue avatar exceed the quality of discussion held in the White House. Kamala Harris has dispelled any doubt you could have about this.

Similarly, the sort of discussions I see in the comment section on the average fringe blog tend to raise the sort of criticisms in regards to the mass vaccination campaign that never even reach the ears of the dudes who have to make a decision. That’s the real shock people aren’t really ready for: They’re not smarter than you, they’re mainly more gregarious and ambitious than you.

And now we’re all paying the price.