An irony I’ve noticed as I grow older is that when you start to think of yourself as bitter and cynical, you’ll eventually find yourself looking back at that period years later and consider yourself adorably naive.  And yet, when you’re still young, you look at people older than you and think most of them must be foolish sheep. 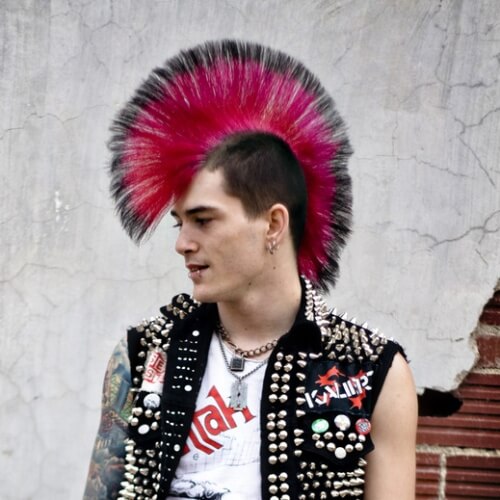 Let me give an example. Most reasonably smart and miserable pale nerdy white boys go through a period in their lives when they’re really heavily into heavy metal, satanism, Nietzsche, monochromatic black clothing and greasy ponytails. At age fifteen they expect this is going to last forever, but by the time they graduate high school, they generally grow out of it. If they enter their twenties and haven’t grown out of it yet, they generally either earn a living as ponytailed headbangers in some shitty band, or they have suffered a developmental arrest of some sort.

Why would you give up on it? Because you’re a poser? That’s where the teenage boys reveal their naivety. You could continue being a Nazi after Hitler committed suicide and claim that anyone who rejected Nazism after the war was simply a poser all along. The reality remains that it makes your life a whole lot easier if you don’t directly signal your misanthropy at anyone in your vicinity.

In a similar manner, if these teenage boys ever want to have a girlfriend who weighs less than two hundred pounds and doesn’t have a mustache or arms covered in cutting scars, they’ll figure out eventually that it doesn’t help them if they signal their allegiance to the cult of the eternal outsider. It would generally help them find steady jobs too, if they would get rid of their greasy ponytails. “But then you’re a poser, just like that guy in my class who sometimes listens to a mainstream commercial metalcore band!” And that’s where the teenage boy reveals his naivety, because in his teenage world, his teenage subculture has a greater significance than his own well being.

The problem of course, is that teenage boys still have an idealistic vision of the world they inhabit. Their ideals may be twisted, politically incorrect and obscure, but they’re still ideals. Yes, you worship Satan, which somehow means rugged individualism in LaVey’s mind. The rest of us do too, but in our case we express our worship of Satan by working for companies that destroy the environment in exchange for handing us a monthly salary that allows us to rent apartments where the girls we bring home don’t have to say hi to our parents first.

The teenage boy thinks he’s cynical, but he still has an idealistic notion of love. Deep down he genuinely believes there’s a girl out there, who would fall in love with him and remain loyal to him, merely because of his innate personality. The idea that he might end up with a wife who would wish to leave him for another guy if he ended up unemployed, is unimaginable to him.

He similarly can’t imagine that in his heavy metal clubhouse there are ten effectively indistinguishable guys, for every reasonably good looking girl who will naturally gravitate to whatever guy happens to carry twenty more pounds of muscle than the rest. Time for me to prematurely shatter another young boy’s innocence: Girls can afford to imagine themselves special, guys need to be useful.

The more cynical you become, the more you start to resemble an average human being. You learn to blend in with the crowd. Eventually it becomes difficult to distinguish between the things you genuinely believe and the things you force yourself to believe. “Do I genuinely believe lab grown meat will put a stop to deforestation, or do I simply consider it a more plausible scenario to plan for than killing 90% of the human population with genetically engineered Ebola?” Is the kind of question you might find yourself asking eventually.

Another thing young boys tend to imagine, is that there are solutions to every problem. Boys run into problems in their mind and begin to identify solutions to them and then go on to base an identity for themselves around their solutions. If Europe is falling apart, its people are filled with self-hatred and our nations are flooded with third world migrants, the solution must be to grow a ponytail, wear a Mjölnir and spend your days listening to distorted guitar music about the vikings.

If the problem is instead that everyone is racist and transphobic while capitalism is destroying the planet, the solution is to backcomb your hair until you end up with smelly dreadlocks, stick a small bone through your earlobe and join a crust punk band. The reality remains however that none of these solutions are going to have any measurable impact outside of how they make you and your direct relatives feel.

You become a conservative, when you learn to live with problems. This happens to everyone. And when the problems you identify are the kind of problems, like soil erosion and climate change, that will lead to the eventual death of everyone you know, you learn to live with that problem too. Even communists become conservatives when they mature. Don’t believe me? In every communist country the same thing happens as the party officials grow older: The genocides gradually become less frequent, people are eventually allowed to have a small shop in front of their house again and the sons of communist party officials start to drive around in expensive imported cars.

This is what unites revolutionaries of every generation: Eventually we figure out that the revolution succeeded but the new order doesn’t work. It’s easy to chase away or kill the aristocrats, it’s hard to get the peasants to grow sufficient food without them. It’s easy to make a Bitcoin worth 10,000 dollar. It’s hard to get the local barista to let you pay for a cup of coffee with it. Every revolutionary has that moment where he figures out for himself that the revolution succeeded but the ideology failed. The cynical ones manage to keep their mouths shut and avoid dying in labor camps.

What young boys think is that they’re cynical because they reject the society they live in. They insufficiently appreciate that the rest of us, who reject the society we nonetheless create together, are the real cynics. We vote despite considering democracy a terrible system, we work at jobs we don’t genuinely believe contribute to society and we marry and have children despite knowing our love does not run deep. And when we, bitter miserable old men, see a young boy with a mohawk or a greasy ponytail, we are enamored by such youthful idealism.