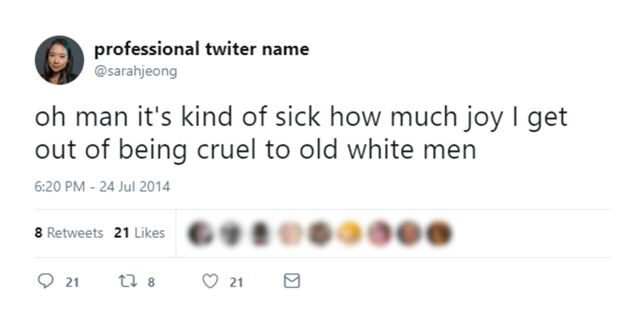 There’s a kind of new totalitarian ideology out there since the dawn of social media. Moldbug referred to it as the Cathedral. It doesn’t really have a proper name, because its adherents don’t think of themselves as a coherent group of people, but it tends to be characterized by a complete ideological adherence to whatever you’re currently supposed to believe. Politically it’s left of center, while appropriating the symbols and rituals of the radical left. The high priesthood of this new ideology consists of Twitter blue checks. The dogmas themselves change quite frequently, what doesn’t change is the radical dogmatic adherence to the dogmas. That’s how you can tell them apart.

One red line through their narrative however, is that they hate white men. They generally claim to hate straight white men the most, but I think that’s doubtful, because they treat deviants the same way you would tolerate your pets. They have a kind of pet caste known as LGBT, who are worshipped for their subversion of the Western nuclear family, the way a Hindu might pay respect to a Saddhu. Within that pet caste however, the white men are still the pariahs.

Lesbians don’t realize it yet, but they’re next on the list once the white men are expunged from the pet caste. If you want to be tolerated as a lesbian, you need to be overweight, devoid of femininity and think of yourself as “queer”, rather than just being a feminine woman who is attracted to feminine women. Highest on the hierarchy are the black transwomen. You’ll see groups of young white women with wealthy daddies cheering them on during BLM rallies as if they were witnessing a pop star.

The question you might have is, why does this phenomenon exist? Is it because white men are evil? The answer is, not really. Everyone knows about colonialism, slavery, genocide, but those things clearly don’t really matter for the cult, because those things still happen in other places and they don’t care. Have you ever seen a BLM protestor complain about the treatment of the Uighur in China? They don’t care. Modern day slavery in the Arab Gulf states? They don’t care. Over a hundred million people thrown into extreme poverty due to the lockdowns? Again, they don’t care.

What they genuinely hate about white men, is the image of independence of white men. What characterizes a Twitter blue check is that their livelihood is fundamentally dependent on the system. They have to go to college to get a good degree, which involves jumping through numerous hoops, or they have to make sure that other people like them. They’re extremely vulnerable to being canceled. Simply being unpopular is enough to end their career.

That’s what sets them apart from average working class white men. As an average white man, you manage to take care of yourself, regardless of whether people like you, because you have skills the system needs. You’re a racist? You’re a homophobe? It doesn’t matter. The oil company, your freelance webdesign job, or your family farm can’t be canceled, because people need to eat. You don’t have a book that we can stop buying, we can’t stop inviting you on TV, we can’t fire you from a corporate board, you’re effectively immune to what we think of you. You probably even have a small stock portfolio that will get you through bad weather, while the blue check lives in a giant metropolitan city where they are always one month of rent away from homelessness.

If there’s anything that’s typical of angry white working class males, it’s that they don’t need to be liked by other people to be capable of taking care of themselves. You think the moon landing was fake, or that vaccines cause autism? Sure, your colleagues might consider you a weirdo, they might not like you, but they need someone to manage their IT infrastructure and they know that hiring a plus-sized woman with short blue hair who mentions her pronouns in her Twitter biography ensures the whole thing will inevitably collapse and the website will stop working.

So, as an angry white working class man, you have an incredible degree of freedom: You have the freedom to truly be yourself. That’s what makes them envious, so that’s what makes them hate you. You post a picture of yourself on social media wearing a Trump hat, or post a meme suggesting that Epstein didn’t kill himself? They can’t destroy you, because you have an actual job, that doesn’t just consist of getting other people to like you. These people who hate you are always one canceled book deal, television appearance or tour away from eviction. They need to be liked, so they have to adjust their own opinions to resemble those of the system. In the process, they realize they stop being themselves.

Why do they always have a long list of mental illnesses? One simple reason is the fact that they can’t be themselves. You’re a plus-sized blue-haired feminist who works as a diversity counselor at Buzzfeed, but secretly you find black men scary. Of course you’ll suffer anxiety: You’re afraid of someone finding out your true beliefs! Nobody is capable of being as tolerant as these people claim to be, so all those repressed emotions lead to various forms of mental illness.

If you understand this, then you also realize that when the angry white working class men have finally been wiped out through fentanyl and suicides, the next target is obvious: Other men who are capable of taking care of themselves. You’re an Indian with your own small restaurant? You make them feel insecure, so deep down they resent you. Why do they hate independent men so much? Because in today’s society, they have every opportunity to accomplish what these independent men have accomplished, so it’s that much more painful that they’re not capable of accomplishing it themselves.

In 1950, a feminist housewife could resign herself to the realization that society is holding her back when she finds herself economically dependent on her husband. Now fast-forward to 2020. That same feminist does everything right: She goes to college, she gets a useful degree, she lands herself a job at a sterile office somewhere. But then she looks at her husband and she realizes he bought some bitcoin in 2011, or he designs some open source software that leads people to shower him with donations, or he brings home six figures as a plumber, or he does anything else that makes him successful without being dependent on the system’s approval. Now she will resent him, because he doesn’t make her feel oppressed (which the human ego can handle), he makes her feel inadequate. There is nobody we hate more, than the person who makes us feel inadequate.

What women tend to admire about men, particularly reasonably intelligent women, is that masculine men can be themselves and stand out from the crowd, without feeling insecure. The other side of that admiration is resentment. Love is much closer to hate than either is to indifference. You notice a lot of men have the same sort of resentment towards good-looking women they’re attracted to. They hate someone like Alex Jones or Trump, not because they peddle bullshit, but because these types are confident enough to peddle whatever nonsense pops up in their heads, rather than parroting what other people on Twitter peddle.

As the pressure to socially conform in our society grows, the few hypermasculine eccentrics left who dare to peddle their own ideas become subject to ever increasing amounts of hatred. We have always had people who believed the Illuminati run the world behind the scenes, that you can cure every disease with garlic, or that bigfoot hides in the forest. What we have never before seen is such hatred for these people: You used to think of a guy like that as your endearing uncle Bob.

That’s something few people these days seem to realize: When Archie Bunker was on TV, people didn’t hate him. By today’s standards, he was a racist, sexist bigot, but he meant well. He made people feel as if you don’t have to be a perfectly tolerant human being, to be worthy of acceptance and sympathy. By today’s standards, it would be impossible to have an old crank like Archie Bunker on TV, without depicting him like a villain.

What needs to be normalized in today’s society is the alienation that working class people, particularly white working class men, feel from government, media and academia. That alienation is perfectly justified, but the media obviously isn’t going to tell you that you’re right to feel alienated from the media, nor are scientists going to perform scientific studies that demonstrate that scientists tend to get it wrong (someone like Ioaniddis is a rare exception).

If working class people are made to feel ashamed for disagreeing with government officials, academics and the media, then working class people ultimately have zero means to defend their own class interest. “I’m losing my job and my children are suicidal because of the lockdown, but that scientist whose job is paid for with my taxes and who now works from home sees his Amazon shares go up every day and says that lockdowns are necessary, so who am I to disagree with him? My wife pointed me to a fact checker website, they said that the Facebook rant shared by my Uncle Bob is racist and mostly false.”

In today’s environment, the bourgeoisie essentially tells the working classes: “You know nothing, you’re too dumb to represent your own class interest, your only hope is to put your trust in us and have faith in our ability to take care of you.” And yet, all the evidence demonstrates that they’re utterly incapable of taking care of you. We have granted them complete power over our lives in 2020, the reward we got was the complete implosion of our economies and the end of people’s ability to take care of themselves without depending on the government.

The only real solution that I see for the working classes is to embrace a state of complete alienation from the chattering classes. The whole system resents you, but it is kept afloat through your labor. That sounds like class warfare perhaps, but you have to realize that what I am suggesting is a kind of radical libertarianism or distributism here instead of Marxism: Any attempt by the working classes to overthrow their elite simply leads the bourgeoisie to dress up in a different outfit. You’re only going to escape their reign and maintain your dignity, by being self-sufficient.

Instead of dressing up as capitalists who own the means of production, or as aristocrats who own the land, the elite now consists of a demographic of academics, politicians and media figures with blue checks on Twitter who decide whether you’re allowed to leave your house today and whether or not your restaurant, hair salon or gym is allowed to open its doors. They maintain their reign over you through the myth of meritocracy: You’re living hand to mouth, but if your kids sign up for six figures worth of college debt, they can become future blue checks on Twitter too! Insofar as this is true (check the dropout rates by family income to see for yourself what generally happens), in the process of educating your children, you’ll cease to recognize them as your own children. They begin to resent their own background and begin to identify with the system that oppresses you.

In a system like this, the working poor’s alienation from society is the only meaningful form of resistance possible.