Something I’ve noticed over the years is that I’m not dumb, but I am lazy. I got through school, not through hard work, but because I’m good at math. Later on, I noticed that the people who did best in college were mostly pretty skinny blonde girls. The guys did alright in the subjects involving math and statistics, but everything else tended to leave girls doing best. There seems to be a relatively simple reason for this: Testosterone. Testosterone makes you bad at following rules and any sort of tasks requiring discipline and conscientiousness. Whereas girls adjust themselves to what is expected of them, boys, particularly working class boys, need to have it beaten into their heads. If you wonder why societies around the world tend to draft young working class men into the military, but leave everyone else to hold onto a regular job, this is the answer you’re looking for: Testosterone makes boys do whatever they feel like doing.

As the demands placed upon us by society increase, the discrepancy between boys and girls grows. Most of the girls jump through the hoops held in front of them, most of the boys jump through a few hoops with great difficulty but then end up going their own way. Society used to work reasonably well for working class boys. You graduate high school and now you’re ready for the workforce. Today that’s no longer the case. You need to go to college. Make sure to graduate in four years and find something else to do immediately afterwards, or be ready to come up with a good excuse on your resume (“I was backpacking in Vietnam to find myself“). After graduating, be ready to work for free (aka an unpaid internship) and have people pretend that working for free is a privilege. Now be ready to show up everyday at 9 AM.

If I had to show up everyday at 9 AM, I would probably end up fired, because I will fail to show up in time. Why is that? Again, testosterone. Men wake up later than women. You can check the studies on this, it’s been scientifically verified multiple times. The difference is biggest when we’re teenagers. So, we create a society where teens have to be at school at 9 AM in the morning and then we’re surprised when girls do better than boys. The difference is even bigger among people with dark triad personalities.

A dark triad personality is an exploitative type of personality style, where you favor your own interest at the cost of those around you. This personality type is caused in part by high testosterone exposure before birth. Such people are generally even stronger night owls. Studies find that morning-preferring people end up doing better at examinations for university entrance, because those examinations are taken in the morning. So, the people who are already at risk of being attracted to the margins of society, are pushed further to the margins by discriminating against their chronotype. Keep in mind that night owl are more intelligent and more creative.

Testosterone makes men pursue their own impulses. It makes them active, rather than passively adjusting to the social expectations placed upon them. We can measure how much testosterone a man was exposed to in the womb, through his digit ratio. People with ADHD tend to have very masculine digit ratios, this is how testosterone causes the low conscientiousness seen in people with ADHD. Studies in sky divers find the same thing. These people need excitement and tend to be bad at following rules. Their exposure to high testosterone levels before birth, made them less conscientious. 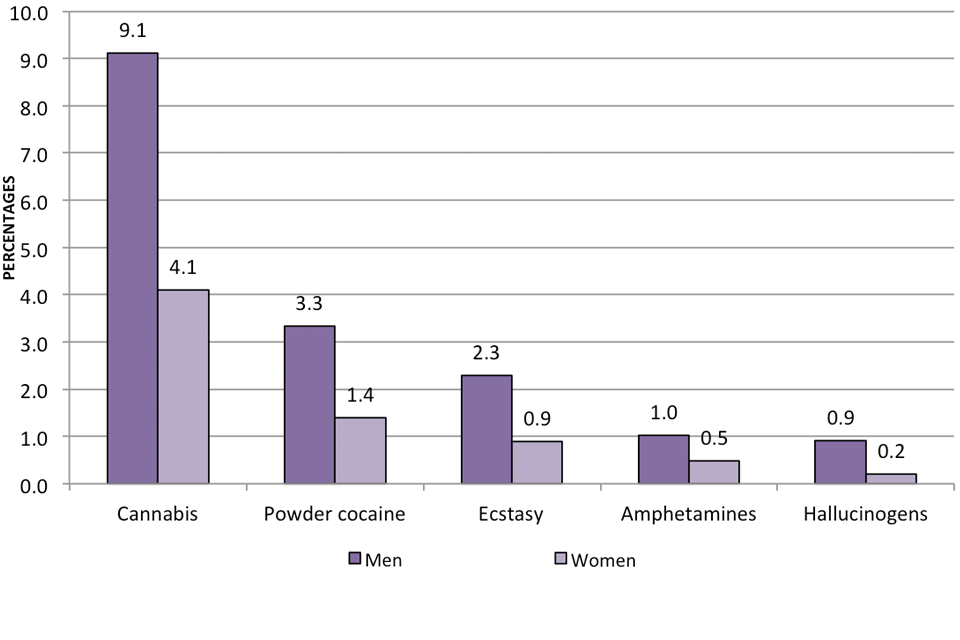 Testosterone causes other personality effects in boys too, that make their lives more difficult than those of girls. Here’s an example: Drug use. Boys use more drugs than girls. Twice as many men as women die of opioid overdoses in the United States. The more obscure a drug is, the bigger the difference between boys and girls seems to be. As seen above for example, the difference between men and women is mild for cannabis, but biggest for hallucinogens. Just as men generally have to beg, bribe, plead and force their girlfriends to play video games, they have to beg, bribe and plead with their girlfriends to get them to take drugs. The girls who swallow Molly or smoke Mary Jane tend to be snatched up rapidly, the girls who are left by themselves tend to be the girls who sit at home studying. The Weeknd famously sings: “Cut that ivory into skinny pieces, then she clean it with her face man I love my baby”. It’s when she takes cocaine that he declares his love for his girlfriend. It won’t shock you that we find in men, that drug use is highest in those with the most masculine digit ratio.

Testosterone causes academic disadvantages in men too. Educational achievement is higher in people exposed to less testosterone in the womb. So, you might have heard Beyonce sing that girls run the world. She is right of course. If running the world requires meeting expectations placed upon you, obedience and adjusting to social norms, then girls end up running the world. Today, the world demands conscientiousness. Conscientiousness has a five time bigger impact on your academic success than your intelligence. The average IQ of college graduates in the 1960’s was 112.3. Now it’s 100. As the average IQ dropped, college gradually transformed from a place where intelligent people discuss new ideas, to a place where people are trained to be good obedient workers.

Of course there are advantages to high testosterone exposure too. Men end up looking more attractive, they end up with larger genitals and they end up more fertile. In the real world, those advantages don’t really help these men out a lot. After all, the disadvantages seem much more significant: They’re more likely to end up in prison and more likely to have autism. The men with low digit ratios would do better in a different era.

You might say that this is not knowledge that is useful or empowering. I would disagree. If you know whether you’re the type of person exposed to high levels of testosterone before birth, you realize that the marginalization you face by our society is caused not by some personal failure, but because of the fact that your personality type is simply marginalized in our society. You’re not alone in suffering this problem, there are people around the world who face the same difficulties. Life becomes much easier when you stop allowing society to force the idea onto you that there is something wrong with you and you need to solve it by adjusting yourself to expectations that come naturally to most people but not to you. If a hare wanted to compete against a turtle, he would invite him to a race. If the turtle is wise, he would suggest a boxing match instead.

So my suggestion is as following: Seek out a way to design your life in accordance to your personality style. Are you bad at getting up at 8 AM in the morning? Get a job that allows you a flexible schedule. Are you bad at swallowing orders and jumping through hoops? Pursue self-employment, you might be a fine freelance web developer. Are you daring and ruthless? Pursue a career that favors those traits, a career with risks that most people reject because they’re cowards. The society we live in suggests that everyone should head to college and get a boring cubicle job afterwards. Here’s a suggestion: There’s an LSD shortage worldwide, but it’s easier than ever before for someone with no connections to sell LSD online. What do you think society needs more, another cubicle drone, or more LSD?

We don’t live in the first society that has faced this problem. Today we think that sending your kids off to college is the path to social mobility, so we end up with a generation of college educated starbucks barristas with debts they’ll never pay off. Renaissance Italy enjoyed classical music sung by castrati, so parents had their sons castrated and most of those sons ended up homeless on the streets, singing an aria in exchange for a coin from a passerby. Human beings are crowd-followers and parents tend to place the cost of their own crowd-following instincts onto their children. It’s extremely common that people overpopulate a niche after hearing a few stories of success.

This is another piece of advice I need to offer to people: It’s possible to respect your parents, without having to conclude that their assesment of how the world works is correct. When I visited my parents a few weeks ago, my mother insisted that the EU is going to end up forcing people to stop driving cars because of “those protesting kids”. It is at this point that I came to the conclusion that I genuinely have no other choice than to design my life in accordance to my own moral values and ideas, rather than fulfilling expectations placed upon me by my parents and endlessly seeking their admiration.