When it comes to COVID, Israel is the canary in the coal mine. Hospital admissions can be distorted by people admitted for unrelated problems. For ICU admissions, that’s less applicable. So I figured I would check how Israel is doing. Here you should be able to see the data for yourself:

I included every country that has data available. And what do we see at the top on the right? Israel. I don’t have an explanation for Latvia. With a population of 1.9 million, it’s tempting to dismiss them as statistical noise. However, these numbers should lead anyone who insists that it doesn’t matter that we now face the most infections ever on a daily basis to reconsider what happens when a highly vaccinated population is exposed to this virus.

With the exception of Latvia, no other country in this list has ever seen as many ICU admissions for this virus as Israel is now seeing. Israel was first to begin giving booster shots to the whole population. Israel now has the highest rate of ICU admissions of all countries that report the numbers. Everyone is now insisting that boosters are the way to get Omicron under control. This seems like the sort of contradictory data point that would lead you to stop and reconsider whether this is really the right way to address the problem.

Remember, all the authorities who caused this disaster are now eager to downplay COVID. Whereas they told you a year ago to stay inside at all cost, they now tell you that rising numbers of infections suddenly don’t matter, because you won’t be hospitalized. And yet, triple vaccinated -soon to be quadruple vaccinated- Israel is seeing record hospital admissions, which will now lead to record ICU admissions in the coming days.

The other thing I feel like noting, is that the zero COVID wokies make a valid point. Hospital admissions for young children are looking terrible. Their innate immune system normally handles this virus for them, but now that they are exposed to this virus on a constant basis because everyone is getting infected, we’re seeing more hospital admissions in children than ever before. Take a look at this: 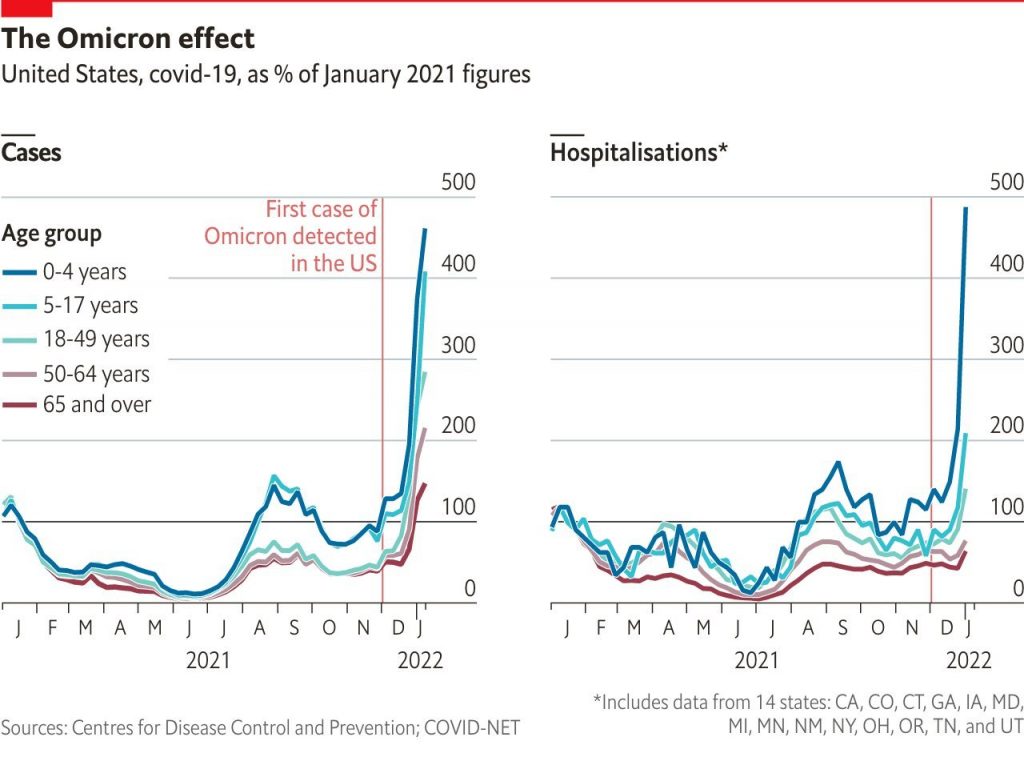 Hospital admissions for this virus often have long term consequences. A nursing home resident who gets sick from this virus will have to deal with the consequences for less than two years on average, because they were already approaching the end of their lives. When children gets so sick that they need to get hospitalized, the impact is far worse, consequences could last a lifetime.

Conservatives are quite willing to jump on the “Omicron is mild” bandwagon pushed by governments and health agencies, because they think it means governments will drop the totalitarian measures they have imposed that made the problem worse, akin to how communist regimes caused unprecedented famines with their failed top-down attempts at ending famines.

However, imagine this was the situation in 2020, with record numbers of sick children ending up in the hospital. What do you think these politicians and bureaucrats who are now telling you this virus has turned into a nothingburger would be saying? They would be blaming Trump.

The biggest insanity can be seen in Denmark. Take a look at this:

Rather, what’s happening is that the governments of the world caused this disaster and now they want you to forget about it. Now that everyone is sick, now that the hospitals are filling with toddlers, now that they have injected you with three doses of mRNA to stop a virus that simply began churning out new variants in response that have the ability to jump into other species, now that the disaster is complete, they’re telling you to move on and forget about it.

Mao sought to improve food production and end starvation by getting the peasants to kill the sparrows. The sparrows were killed, the insects now lost their main natural predator, locust swarms formed that began consuming all the grain and so Mao simply quietly changed the four pest campaign to include bed bugs rather than sparrows and the survivors of the great Chinese famine were supposed to simply forget about the whole episode. The government tried covering up what they had caused and physicians were told not to record starvation as a cause of death.

Now let’s do COVID. Governments ignored a new virus that emerged in China until it showed up in every major Western city. Once it was everywhere, they locked everyone up in their homes. Instead of allowing the young to develop natural immunity through mass gatherings while the elderly shield inside until the wave subsides, the virus could now infect elderly along with the young. People were needlessly placed on ventilators and elderly sick patients were sent to nursing homes to make way for a wave of younger patients that never came.

After this the governments began mandating masks. You were supposed to wear some cloth fabric over your mouth that gets dirty and forces you to inhale the same air you just exhaled. If you cough, your body’s natural method of expelling stuff from your lungs, you will inhale the same dirty air that your body just tried to expel. The few studies we had at the time suggested that masks merely make you more susceptible to viral respiratory infections, but they would nonetheless mandate this.

At this point they’re now telling you to drop these masks (thus admitting they don’t protect you) and expect you to wear an N95 instead. When we have concrete evidence that masks increase viral infections, we can’t just stick to pretending that they merely “don’t work”, on the basis of the balance of evidence we had before ideological convictions took over we can say that they were an essential part of causing this pandemic and will have directly contributed to human deaths.

By locking people up in their homes, the governments drove all other mild respiratory viruses like influenza that normally generate cross-immunity into near extinction. The social distancing was insufficient to get rid of SARS-COV-2, because nobody had proper immunity against it yet, but it was sufficient to get rid of influenza and the human coronaviruses, the mild coronaviruses that are structurally similar to SARS-COV-2 and thus stimulate protective cross-reactive immunity against SARS-COV-2.

Again, the conservatives don’t understand what actually happened. They think the governments simply stopped reporting influenza infections and that influenza deaths were simply relabeled as COVID deaths. In reality, these social distancing policies were sufficient to drive a virus like influenza to an R below 1, but insufficient to drive SARS-COV-2 to an R below 1. This happened because far more people had pre-existing immunity to influenza and the human corona viruses. Social distancing was the unprecedented man-made disaster that eroded our pre-existing cross-reactive immunity against SARS-COV-2 and enabled the big second wave that we saw in the winter of 2020.

By constantly “flattening the curve”, you generate a situation in which the virus can slowly spread into more people, constantly receiving new opportunities to generate new mutations. If it were able to blow through a population, then it would run out of susceptible people, it would overexploit its prey, like deer on a crowded island who consume all the plants and subsequently die of hunger before the plants can regrow. However, what the governments have done by flattening the curve is reducing and delaying the height of the peak. In the meantime, people who have been infected have time to become susceptible to infection once again. As a result, you ensure that herd immunity becomes impossible.

Then finally they began to mandate vaccines, that first suppress your immune system and make it easier for you to get infected. The first fourteen days after the first shot you’re still counted as unvaccinated however, so the hospital admissions that occurred due to infections in the first 14 days were counted as occurring in the unvaccinated and suddenly it began to look like we had a massive “pandemic of the unvaccinated”.

They were also telling you to constantly get tested for this virus, particularly if you’re unvaccinated. Your nose has a layer of mucus that covers every area and serves as a natural layer of defense against anything in the air. It traps tiny particles like viruses to protect you. They expect you to constantly get a swab stuck in your nose, rubbing away the delicate first layer of defense that is supposed to protect you from viruses that enter your upper respiratory tract.

You’re exposed to this procedure in a room full of people who thought they had this virus. Unvaccinated people like me, who felt perfectly healthy, were forced to undergo this procedure if we wanted to go to the gym or go to a restaurant. Friends of mine who went on vacation to the Dutch Antilles would walk into a room where a garbage can would be filled with bloody paper tissues, because everyone has to undergo this mandatory procedure to protect our health.

And then after all of this stupidity, it turns out that a virus that seemed like a major nothingburger at first, has now killed millions of people, mutated to overcome the vaccines and jumped into non-human species where it will create new variants that will constantly reinfect us. This is a man-made disaster from A to Z, the Western liberal democratic equivalent of the Great Chinese Famine. And like the Great Chinese Famine, once the disaster has taken place, the authorities who caused the disaster now want you to forget about it.

The unprecedented outcome that our governments created is a pandemic that has now caused tens of millions of deaths. They don’t want people to start looking into this and it’s becoming increasingly clear that the media are beginning to ask the right questions, starting with the simple question of how this virus ever came into existence in the first place. And that’s why, even with record numbers of infections and children ending up in hospitals, we now see the bureaucracy moving on and declaring: COVID IS OVER!