Just a friendly reminder. Anyone that claims that any variant will render these vaccines entirely useless is not worth listening to.

Entirely useless? How about worse than useless?

10/ It can be argued that the 2.4x ratio was estimated from Nov 1 to Nov 27, when Omicron was not fully prevalent during the first two weeks.

Even a 5x re-infection risk with Omicron would not be sufficient to explain its ultra-rapid prevalence increase in SA and it would likely imply that vaccine induced immunity is enhancing Omicron's infectivity.

What would worse than useless look like? Well here are some rough indicators. If you see zero neutralizing activity against Omicron in people vaccinated six months ago, that leaves them just with binding antibodies that can enhance infection.

Another indicator that would suggest the vaccines are worse than useless and enhance transmission, is when you see a higher rate of reproduction in more highly vaccinated populations than South Africa:

This approach finds that Delta Rt has remained low, while Omicron Rt is between 3 and 4 in South Africa and initial Omicron Rt is ~6 in the UK. 10/21 pic.twitter.com/IIF1bwQna7

You know what’s worse than useless? When the vaccine prohibits your body from developing a full mature immune response. Here’s what that looks like: 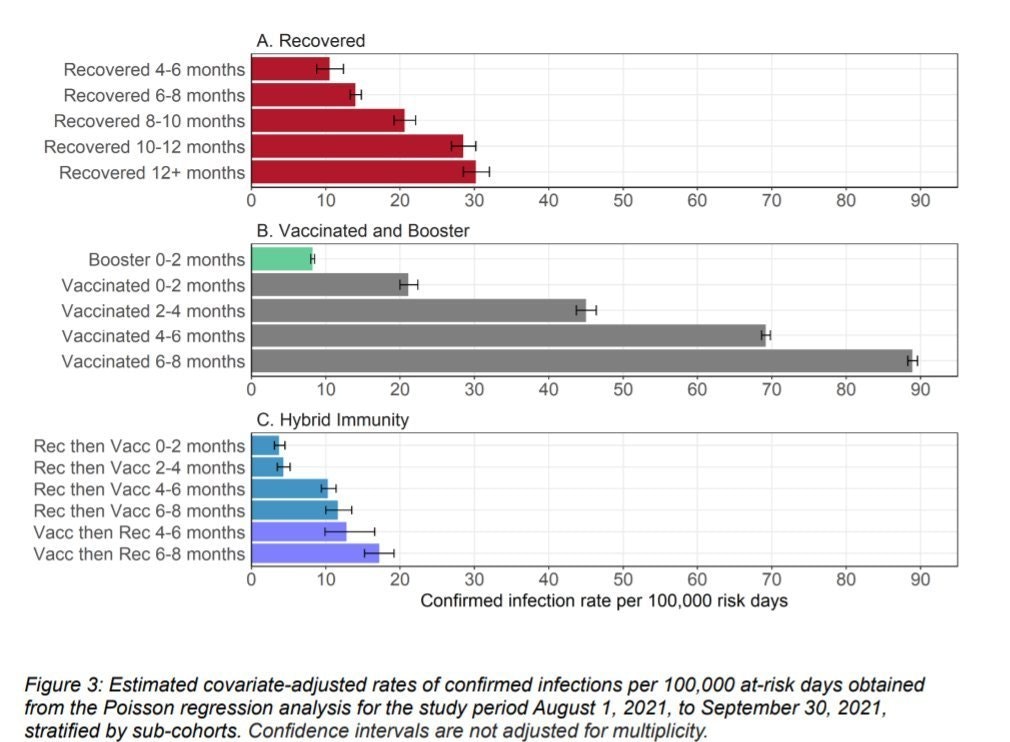 Somehow those who were vaccinated before having a breakthrough infection never develop the sort of protection of those who had an infection before being vaccinated. That’s a red flag for original antigenic sin. The immune system is taught to focus on the Spike protein and if it never had an opportunity to target other proteins through a natural infection, it stays stuck targeting the Spike protein, which happens to rapidly mutate as can now be seen in Omicron.

And that’s why we see these puzzling graphs in England: 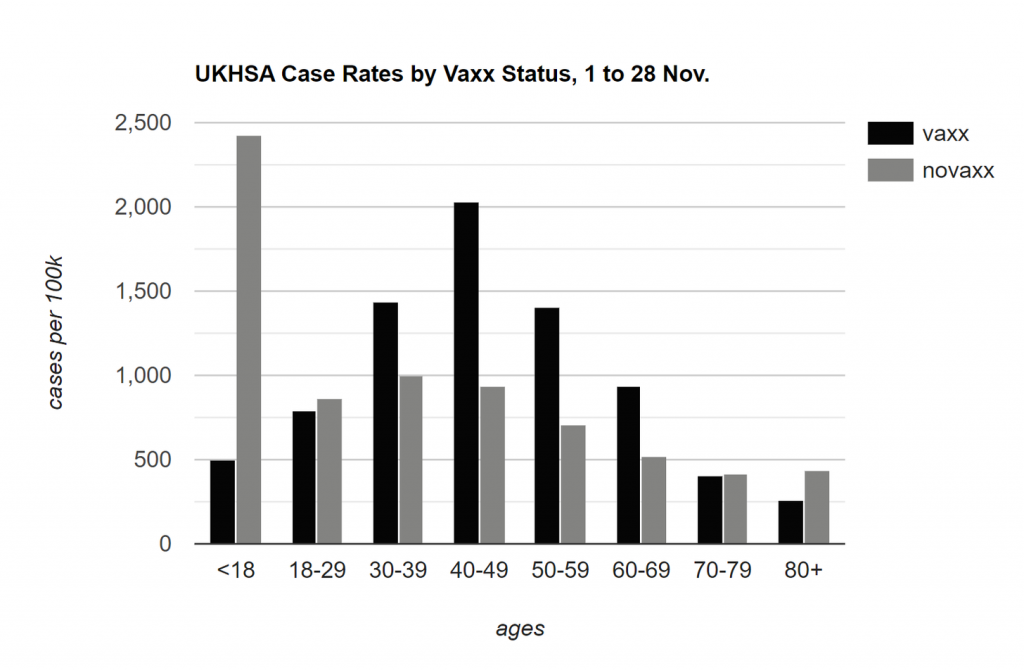 So it looks like the vaccine is worse than useless when it comes to your risk of getting infected. For Delta this is the case, but for Omicron, with even more changes to its Spike protein, this is even more so the case. And that leads us to this worrisome result: Healthy young people in their twenties, who have received three Pfizer shots and are now getting sick from this variant.

This is what we see with healthy people in their twenties, who received their third shot about a month ago:

All patients were placed in domestic isolation and used a daily symptom diary to document the course of disease. All individuals had symptoms compatible with COVID-19. Initial symptoms were sore throat (85.7 %), fatigue (71.4 %), headaches (57.14 %), dry cough (42.9%), chest pressure, sinus pressure, rhinitis and nausea (all reported by 28.6 %) (Table 2). Night sweats were seen in one patient within the first three days after symptom onset. As the infection progressed, all individuals developed a dry cough, 85.7 % had sinus pressure, and 71.4 % had rhinitis. Anosmia and dysgeusia were observed only temporarily (on day 3) in one patient. Fever was reported by 14.3 % of patients. At the end of the observation period (day 7), dry cough (100 %), rhinitis (71.4 %), sore throat (57.1 %) and shortness of breath (42.9 %) were the predominant symptoms, with a general reduction of symptom severity. Overall, all cases described their symptoms as mild or moderate and none required hospitalisation during the observation period (Figure 1).

But here’s the real question: What do you think is going to happen to the elderly who were supposed to be protected by these vaccines? It’s clear that a third booster doesn’t even deliver protection against symptomatic disease in healthy young people, half of them experienced shortness of breath.

Yeah about that. After a mild infection, your CD8+ T cells are exhausted, making you susceptible to a severe reinfection. In other words, expecting the T cell response to solve this problem seems like wishful thinking. Geert van den Bossche also warned about this. Omicron infections may be generally mild right now, but the reinfections under conditions of constant high exposure are worrisome.

You see suggestions thrown around, that the virus must have evolved to become milder, or that it is now “unstable” due to the mutations. But if you look at it at a molecular level, there’s no obvious evidence for these assertions:

We used computational studies to examine the Delta and Omicron variants in this work and found that the Omicron variant had a higher affinity for human ACE2 than the Delta variant due to a significant number of mutations in the SARS-CoV-2 receptor binding domain, indicating a higher potential for transmission. Based on docking studies, the Q493R, N501Y, S371L, S373P, S375F, Q498R, and T478K mutations contribute significantly to high binding affinity with human ACE2. In comparison to the Delta variant, both the entire spike protein and the RBD in Omicron include a high proportion of hydrophobic amino acids such as leucine and phenylalanine. These amino acids are located within the protein’s core and are required for structural stability. Omicron has a higher percentage of alpha-helix structure than the Delta variant in both whole spike protein and RBD, indicating that it has a more stable structure.

It’s clear that the antibody response induced by two shots no longer works against this variant. Neutralization in elderly six months after the second shot is zero.

So what should we do? Bet on a booster to do the trick? Well about that. The boosters have negative efficacy for the first four weeks:

What would that look like in the real world?

Now, we know. Negative VE the first month after the booster. https://t.co/78MZ1xS362 pic.twitter.com/kWhTKs7jYN

Why do the boosters have negative efficacy? It’s pretty easy. You inject the mRNA into the muscle in your arm. The relevant white blood cells that can deal with the spike protein now migrate towards your arm. This leaves the rest of your body more susceptible, because the soldiers who know how to deal with this enemy are stuck dealing with the mess in your arm muscle for the first four weeks.

So how smart is it for us to be giving vulnerable people boosters, in the middle of the season?

And that matters, because Omicron is going to be the dominant variant throughout Western Europe before the end of this month:

Everyone is now saying that it’s mild, but have you ever considered the following possibility: It looks mild, because the symptoms you experience are normally not caused by the virus, but by your own immune system. We can’t tell apart the symptoms of vaccination against this virus from symptoms of infection with the virus itself. If this variant has evolved tricks (which appears to be the case) that allow it to avoid triggering recognition by your immune system, the result will be that your initial symptoms will be milder.

To me, all the indicators suggest that we’re witnessing the worst case scenario: A variant of this virus, that has figured out how to use our vaccine induced immune response against it to its own advantage. I understand why the vaccine manufacturers are downplaying this variant, as it makes their product potentially deadly. I don’t understand however why other people fall for this. People are looking at South Africa and imagining this allows them to understand what’s going to happen here in Europe, not realizing they were hit in summer, in a young population where 80% of people have natural immunity.

I think we made a big mistake with this virus. Mutations that become dominant because they enhance replication will also tend to be mutations that increase severity of the infection. This makes intuitive sense: More virus damages your body more. More virus also makes the virus spread more easily. Because of this problem, our best option would have been to get everyone infected as rapidly as possible. We went with the opposite: We bred superstrains, by making it difficult for the virus to spread, which forced weak strains to die out and only allowed strong strains to survive.

The only real solution we have is mass prophylaxis, which Geert van den Bossche has repeatedly suggested. Eat healthy foods, mostly plants and particularly legumes and vegetables high in protease inhibitors. Plant based proteins are full of protease inhibitors, which make it difficult for the virus to replicate. Ivermectin may be useful too, although the evidence is contradictory. Finally, zinc, vitamin K2 and vitamin D are important, as is quercetin.

I’ll show you once more why trying to eradicate this virus is a fool’s game. Here you can see South Korea, which is the country that did everything you’re supposed to do:

It doesn’t matter what you do, this virus eventually gets into your country. When it gets in, it’s going to spread and it’s going to make people sick. If they have had exposure to older milder strains, fewer people get sick. If they have no immunity from earlier exposures and suddenly get hit with a severe strain like Delta, you get mass death. The longer you wait with allowing herd immunity to build up, the worse the outcome becomes.

Can’t we avoid this with vaccines? It should be possible to avoid with a live attenuated intranasal vaccine, but they’re not deploying those, they’re deploying spike protein based vaccines that don’t deliver sterilizing immunity and simply encourage new variants with different spike proteins to emerge, like Omicron. I explained this half a year ago, but now the evidence is there for everyone to see.

Building up herd immunity is the only strategy that works, as can be seen in this graph: 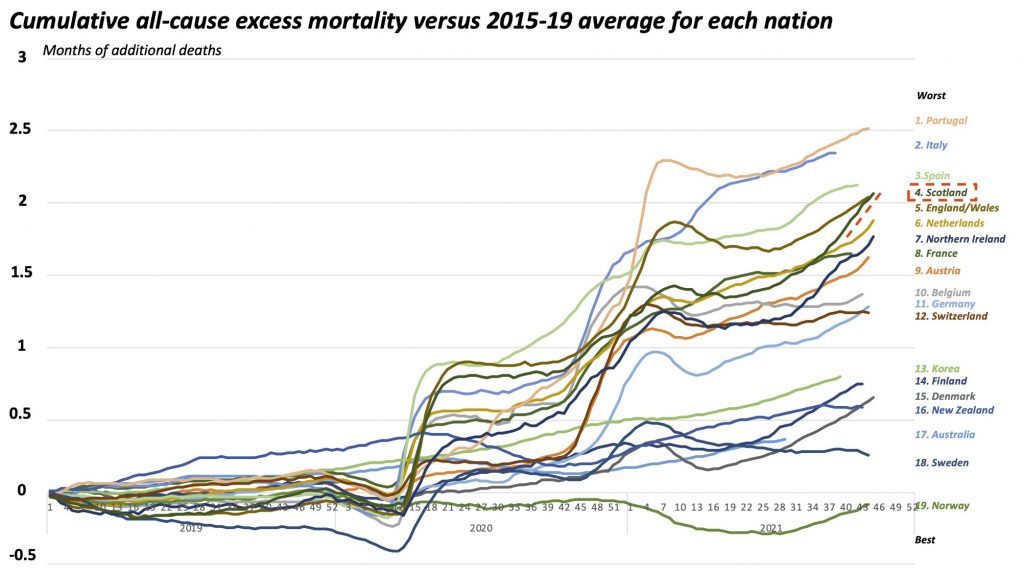 Countries that try really hard to avoid getting hit by the virus just end up getting hit later on, by worse variants.

With Spike protein based vaccines you merely make this situation worse, because you immunize everyone against the same version of the Spike protein, making the whole population susceptible to a variant like Omicron, that has selectively changed some of the amino acids in its Spike protein to allow it to spread through a vaccinated population with a now highly homogeneous immune response.

If you look at this graph you also see the fake “success” of Portugal. They appear as if they have the situation under control now thanks to vaccines, but the reality is that they have the highest excess mortality in Europe. The only solution that genuinely works is to build up widespread diverse (as opposed to homogeneous) immunity in the upper respiratory tract. As long as everyone’s immune response looks highly similar and people do not develop sterilizing immunity in the upper respiratory tract, we’re going to remain stuck in this mess.